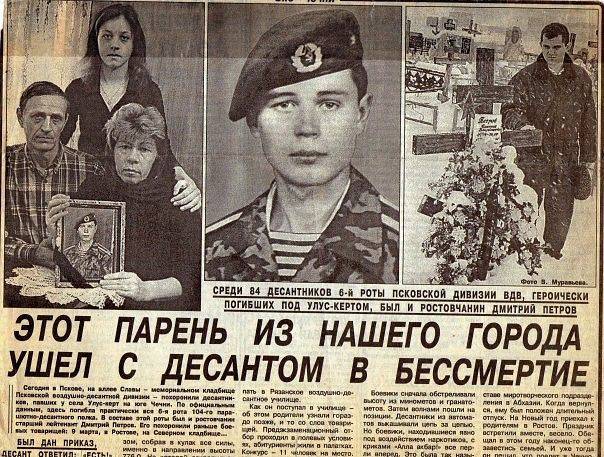 10 June 2016, the birthday of Dmitry Petrov, in a small room of the club "Young Pilot" gathered everyone who remembered him. He died in 2000, defending his Homeland at the height of 776 as part of the sixth company of the Pskov paratroopers. He was only 25 years old.

To get to the club, you need to drive almost the entire city, find yourself in an area called Voenved, and find a dwelling house, on the first floor of which, in three small rooms, there is a club where young people are taught air basics.

- This year, the Rostov club "Young Pilot" marks 35 years. From here came not one thousand girls and boys. The same boy came here and our son Dima. 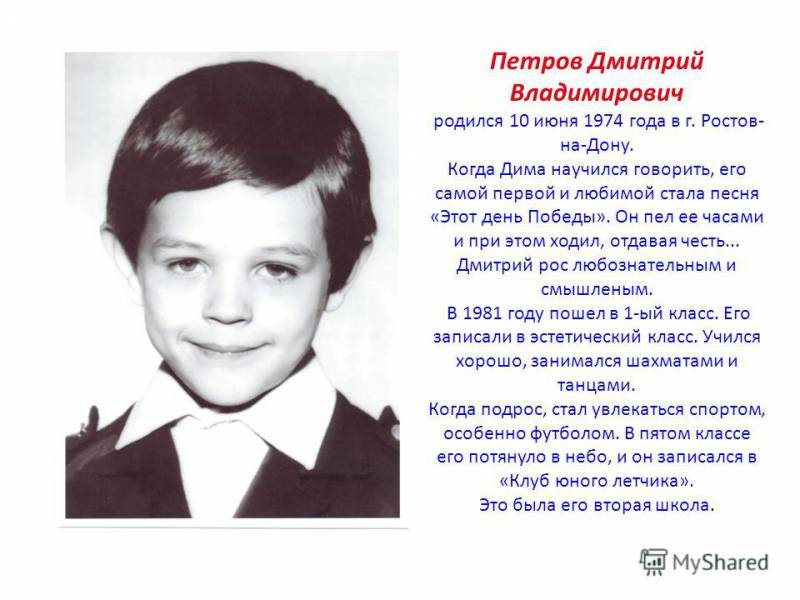 He was then 12 years old. In the five years that he visited the club, he did not have a single delay. The club became his second home. And in 15 years he made his first parachute jump. Thin, light. I say to him: “Son, will you fly away, where will they catch?” So I was joking with him. And he, as they say, stuck to the sky, to the flight. It captured him. And me too. After all, I still remember my unforgettable feelings that you experience when you are in the depths of heaven. After jumping the son just beamed. And my mother and I realized that this was his way and began to help him. He was able to enter the Ryazan School. But there was a big competition then - 11 people into place. We went to him for an oath. There were many young people there who were completely dressed in one uniform, and we could not find our own Dima. And then his younger sister saw, ran up, hung on his arm - here his father, Vladimir Dmitrievich Petrov, stops for a moment. Tears are wrapped around his eyes, but he squeezes this manifestation of feelings inside him and continues his story. His voice trembles. 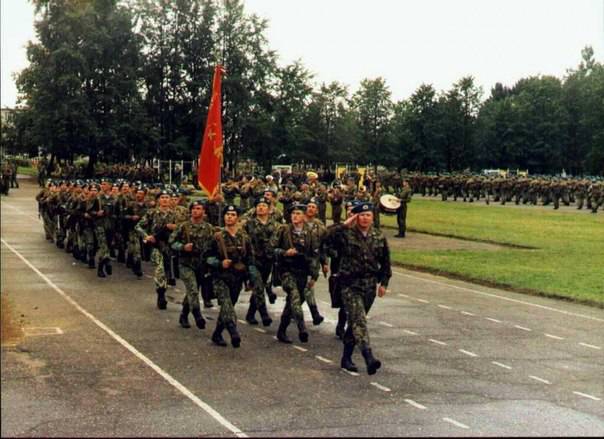 - Graduated Dima school well. First he commanded a platoon, then he got a company. In Abkhazia, in the performance of military duty received a heavy concussion. Then in August 1999, the Georgian gunners opened fire on the location of our combat units. But everything turned out well. And then there was a business trip to Chechnya. Intelligence did not work well: instead of the alleged 600 fighters, about three thousand went for a breakthrough.

I want to say that our landing troops are elite troops. One must have a very powerful spiritual core to serve there. Indeed, during the battle, the paratroopers were offered to miss the militants for money. Ours did not commit themselves, their honor.

The company died. Killed and son - 10 bullets in the chest and splinter wound in the abdomen.

Why was there no help? I will say: Troshev was interested in the death of a company. After all, she was put in a position in which she had to either withdraw or surrender. Today, our Russian president made it clear to our enemies that we have troops that can fight, fight back. I want to repeat the motto of the paratroopers: "Nobody but us!"

29 February 2000 of the Year was hoisted over the Shatoi by the flag of Russia, which was brought here by General Troshev, who reported to the President on the capture of the last strong point of the gangs, on the completion of the third stage of the counterterrorist operation. The military phase of the operation is completed, no one has resistance.

“Today we have put an end to the destruction of the gangs,” Gennady Troshev, deputy commander of the Joint Group of Forces in the North Caucasus, told reporters. - This, however, does not mean that all of them are completely broken up, but as large gangster formations do not exist today. Remains stubs, renegades, who today run up in small groups in order to save their skin. "

But the point was still too early. On the same day, in the area of ​​the Chechen village of Ulus-Kert, a group of Hottab numbering about 2000 people and above concentrated (according to preliminary data). From here they were going to break through the Argun gorge, seize a number of villages, go out in the Vedeno area and then hide in Dagestan. The militant caravan headed through the pass at the height of 776.

The Pskov paratroopers commanded by Sergei Molodov advanced to the 28 February height, making an 14-kilometer-march, carrying all the weapons - because the helicopters could not deliver to their location at least part of the equipment (there was no suitable landing ground - so indicated in the official version).

The company is strongly stretched. The first reached the height of five scouts under the command of Alexei Vorobiev. They entered the first battle, which began on February 29 in 12.30. Although before that, as eyewitnesses of the events tell, the militants entered into negotiations with the paratroopers and promised them money, persuaded to let them through, saying that they paid thousands of dollars to anyone.

They did not even have time to dig in and put minefields. The fact that in their direction a large detachment of militants is moving, army intelligence did not report in time. “There was a suggestion that a large detachment of fighters was moving in their direction, but the enemy could move in different directions,” said Deputy Commander of the Russian Airborne Forces Nikolai Staskov in 2000 in one of his interviews. “We did not expect the enemy to choose the direction of the main strike between the rivers”.

Having been repulsed, the militants attempted to pass through a hollow near the Abazulgol River, but, having stumbled upon fortified checkpoints at neighboring heights, returned and went to the assault on 776-th height from three sides at once.

The paratroopers at that time were able to partially dig in at two altitudes.

The militants tried once more to take the company into the ring: around 400, the militants headed around, but they were prevented by the reconnaissance lieutenant Kozhemyakin, who fought off their violent attacks for three hours.

Closer to night, the intensity of the battle went out. The enemy began regrouping. By radio interception, it was possible to understand that the militants were requesting additional forces.

“By 24 hours of the night, the battle had reached its highest limit,” Staskov said in his interview. - The Intelligence Service was forced to withdraw and take up positions in the defense area of ​​the sixth company, suffering heavy losses. On the first day of the battle, the company commander, Major Molodov, was killed. ”

Although today it is a well-known fact that on March 1 the company commander, Major Sergey Molodov, was killed and two intelligence officers were injured. Mark Evtyukhov took command of himself.

The first company tried to break through to help the paratroopers, but was unable to cross the Abazulgol river because of the strong fire of the enemy who had set up the ambush.

“Measures of deployment were also taken,” said Staskov. - That is to cross the water barrier and assist the sixth parachute company. But during the day they simply could not get through because the enemy took up defenses from the water cut and simply did not give us any opportunity to cross over to the other side. ”

In the morning, a platoon of a fourth company headed by Major Devantalov made his way to the rescue of Evtyukhin from 787, who was the only one who could really help and come to the rescue of his neighbor, bringing the 15 with him.

By this time, along with the battalion commander, a handful of Guardsmen survived. They ran out of ammunition, and the wounded paratroopers came together with the militants in hand-to-hand combat.

The road where the Pskov paratroopers died, goes along the river bed. On the cloak-tents here, to the shore carried all the fallen. Total 84 person. Six of the paratroopers from 90 survived in the morning: four of them were seriously injured, and not a single bullet touched the two of them because they did not participate in the battle.

“Yes, indeed on the first day we did not know the number of deaths,” Gennady Troshev said in an interview with central television channels in 2000. - When the connection was still with the battalion commander, we recognized the first figure that was told to them - these were 31 people who died. Who are they? From the sixth airborne company? From some other unit? We didn’t know that. That is why the first figure appeared - this is 31 dead. This is the first. And secondly, for three days the battle went on. Only on the fifth day could the troops approach there. Aviation it wasn’t used only for one reason: there was fog, it was impossible to fly, to strike. ” 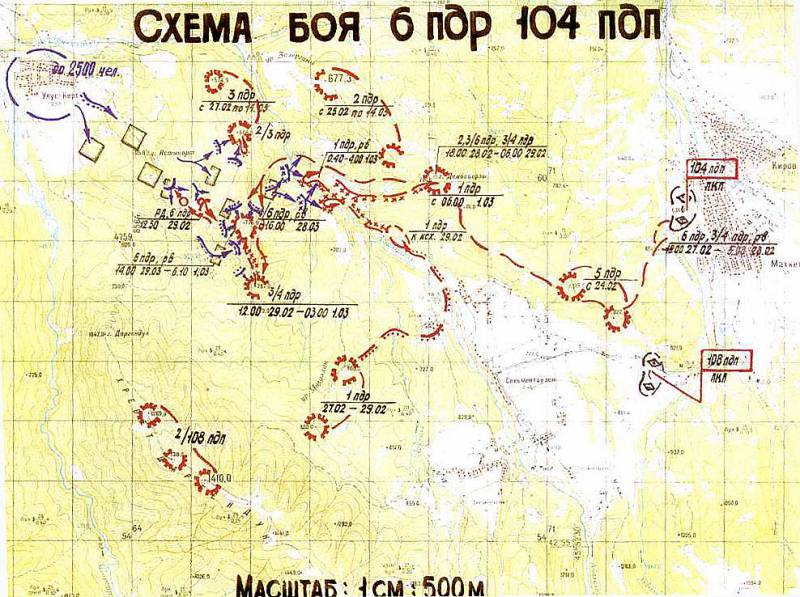 But Troshev will tell about this later. At first there was silence. On March XNUMX, information about the death of the paratroopers leaked to the press (a week after the battle). On March XNUMX, the heart of the commander of the Northern Marine Corps stopped from experiencing fleet Major General Alexander Otrakovsky, who was ready to go to the aid of the paratroopers, but he was ordered to stay in place. Otrakovsky was refused his repeated requests. He understood that his comrades were dying, but did not dare to violate the military order.

Sergei Yastrzhembsky, presidential aide, asked the press to put the right emphasis on the fact that hundreds of militants were killed. But the official number of losses was not called. The first could not stand the governor of the Pskov region Yevgeny Mikhailov, who, referring to information received from the commander of the airborne forces Gennady Shpak, then called the official number of the dead - 85 people. Although 84 people died.

Our compatriot Dmitry Petrov is in strict order alphabetically in this list 16. On the monument in Rostov-on-Don, his date of birth is engraved, and the date of death is not indicated: it is not known for sure on what day of February or March 2000 of the year he died. 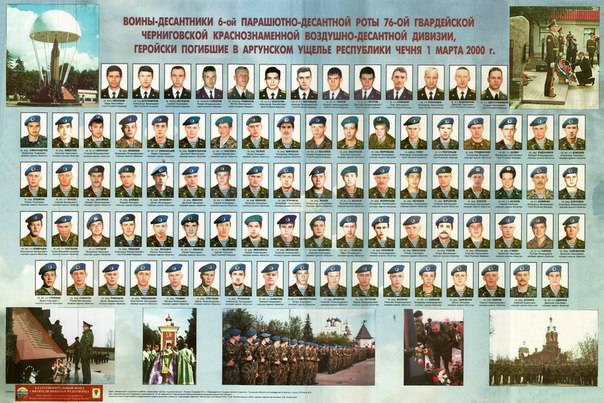 Only they did not die in alphabetical order, and received awards posthumously:

The following soldiers survived the battle: