Is my friend the enemy of my enemy? Reflections on the events in Orlando

14 2016 June
201
After reading the comments on the article on the incident in Orlando, I decided to express a couple of thoughts.

And they do not concern the shot representatives of the LGBT USA, I, frankly speaking, do not care a bit, and not even the one who sent them to the next world. This is in any case, the problems of the American system. As special services, and the government. And, paraphrasing the well-known proverb, in that monastery there is nothing to go with its charter. 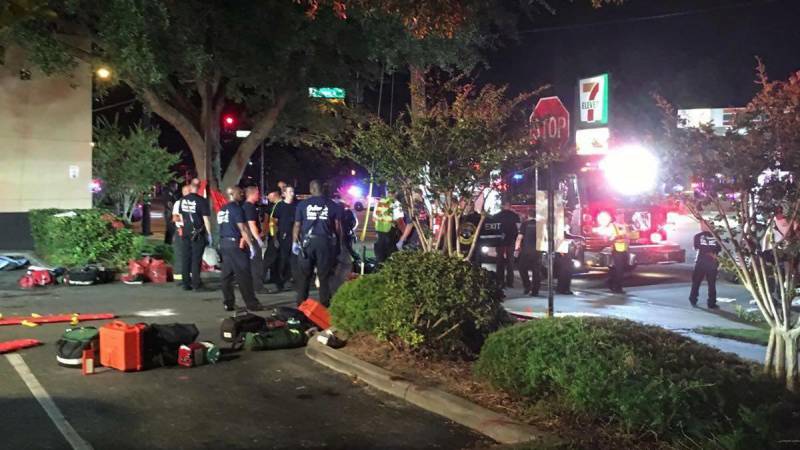 But before proceeding to the citation of comments, it is necessary to voice a few questions.

1. Who was killed in Orlando? People, or still not very?

That's how for me - not so much. That is, if we speak tolerantly, then as long as these representatives of the other world do not claim to be my powerful ass, then they are quite people. Especially there, over the ocean. They go to their parades, demonstrate their ideas - to spit. These are the problems of the American pans, even if they cook in it.

When this problem arises in Russia - this is a completely different calico. Yes, when in my city a certain rally was organized in defense of LGBT rights, then ten times more people gathered on the opposite side of the defenders, with the intention to prove a slightly different point of view, different from LGBT. And, I confess, I was also in that crowd, and not a fig with a camera and a microphone. Very different things, very far from correspondent activities.

In other words, when LGBT people play outside our country - oh yeah, I’m tolerant, I don’t know who. The very embodiment of equality and understanding. But when we ... sorry.

The fact that the person who organized the massacre of LGBT people in Orlando is a US citizen is peculiar. Omar Matin, 29 yo Coming from an Afghan family. His father successfully works on the US satellite television channel for Afghans. 29 years is like an age ... average. It would not be a boy already, but far from a reasonable husband.

To the portrait of Omar, you can still add the fact that he was not observed mental abnormalities, and the sharpness in the relationship is inherent in all people from that part of the world.

It is unlikely that the "suddenly seen" Omar saw the kissing organisms with male signs and slid off the coils. I believe more that someone helped him.

It has already become clear that the assistant was. He is also a character from the action movie. Marcus Duane Robertson, 47 years, former Marine. After serving, he assembled a gang, which he called "Ali Baba and 40 robbers" and at one time successfully robbed banks. Sat (of course), including for illegal traffic weapons. A year ago, returning from a regular "walk", he took the name of Abu Tabah and now conducts a network seminar on the fundamental study of Islam of a very radical nature.

Omar Matin was one of the attendees of the seminar. Already proven. Here, nasminarilsya.

No, by the way, data that Matin was in the ranks of ISIS. Yes, he declared sympathy. So in principle, you can equate. But more on that later.

What follows from this?

And nothing. First of all, it is the headache of the US government, which leads a super-democratic policy to legalize everyone and everything without exceptions.

Of course, after such an event, the heads of normal states could not help but express condolences. Everything is clear here, not every day fifty people are so easily killed.

However, many of the condolences were silent, like fish, when the 2 of May in Odessa was not quite normal people (or rather, outspoken nonhumans) killed absolutely normal. This is not a tragedy. And when almost 10 thousands of people died in the Donbas in two years, for some reason, no one called this tragedy a tragedy.

For two years, from among my acquaintances on the other side of the border, 11 people died. For me personally, this tragedy is immeasurably greater than the death of fifty ... representatives. Because each of these eleven could bring to this world much more benefit than all 50 LGBT people, and even in the USA. This is a tragedy. And what happened in the United States is nothing more than statistics, and even with the filing of the government of this country.

But back to ours. This is more significant than trampling the topic of these representatives.

What I saw in the comments, and what I, to put it mildly, did not like.

A strange attitude of some of our visitors. (Published without editing. - Ed. "IN".)

dmi.pris:
What can you say here ... Probably for the first time I support the radical Islamist ... Although this is a murder. If you want to impose sodomy, you will receive an answer.

Militon:
What you sow, then reap. They spread terror around the world. The boomerang is back and slammed into American buggers. Well, let them bury quickly.

Anglorussian:
Nobody killed people. Only partners ... You are like me, any other unfaithful pig-eater is a legal target for the same attack from a poor girl who does not like the world in which he lives (instead of leaving for his wonderful world with sheep and sharia) orders arrange here among us). How promising?

faridg7:
So I could consider Tchaikovsky, who suffered from frustration, and hid it in every possible way. But I can’t consider these people suffering - they expose this abomination as dignity and want their interests to be considered. I don’t feel sorry for them, I’m sorry for the arrow.

isya top:
"Omar Matin shot 50 and injured the visitor to the 53 institution, reports RIA News".
not visitors, but homosexuals. our person

YARG:
The medal is necessary to give the guy. Hero of our time.

Darth Revan:
Islamists are enemies for me, but I would shake hands with this guy! Heresy must be eradicated with a weapon in hand!

I deliberately removed the checkboxes, even if not all quoted here - the Russians. Essentially does not change, but causes, as they say, concern.

I agree that representatives of LGBT people do not cause pronounced positive emotions in the majority of the population. However, let's draw some kind of parallel.

Matin was not like an ISIS fighter. Only sympathetic. Therefore, probably, in the USA they got off so easily. Irony? Partly.

So, the hero of our time, the body, worthy of shaking hands or medals. Having made a successful attempt to purify a small crap part of our world from filth. So?

But forgive those whom he sympathizes with, they also cleanse the world of filth. Killing dissidents, destroying monuments of ancient civilizations, cutting off heads to journalists and prisoners of war. And it was precisely those whom Matin sympathized and idealized, so carefully processed our videoconferencing systems in Syria. And it was in the struggle with his ideals that our compatriots perished.

I just want to ask: gentlemen, who are you for?

By the way, I agree in part. Yes, they did. And, quite possibly, we will not just see it, but feel it in our own skin. Or do you, dear, think that everything in ISIS is so easy for us to forget Syria? Do not hold them for fools.

Today in the ranks of ISIS there are hundreds of creeps from our country. The same, with treated brains, such as Matin or this ... Sparrow. Who is sure on 100% that they are all there? Personally, I - no. And it will come back. And not a fact to forget everything.

Yeah, I foresee: Matin, who killed fifty LGBT people in the United States, is one thing, and Ira Migunova, for example, which rips the belt of the suicide bomb in the Sochi bus — Moscow is another. One for us is a reason to bite, the second is a real tragedy.

You know, dear ones, probably because we are still treated as barbarians to the general mass. And we, oddly enough, constantly confirm. One happily rubs the little hands from the fact that the igilovsky fanatic shot a hundred homosexuals. The second climbs into the sector of fans of another country to wave their fists. The third one, shouting "Russia, go ahead!", Waving the national flag, leads the English fans to their battle on the square in front of the pub.

All this is definitely a manifestation of the highest level of spirituality and civilization. Here I will not even argue.

avt:
Well, do we all the world now have to mourn? Let them figure it out themselves, with their homosexuals and Islamists, but we need to draw the right conclusions from everything — we must live and develop our mind.

Subscribe Indeed, it is possible to grieve here only because of the lack of elementary thinking among some of our readers, and especially among our compatriots.

LGBT is an infection in which in the normal world there is only a place in reservations and closed clubs. But it, LGBT, doesn’t rush to the top. In Russia, at least. Well, except for the stage. But that is another question.

ISIS is also a cancerous tumor, but, unlike LGBT people, ISIS is eager for freedom to implant its own world, in its own terms. And, gentlemen approving, you (like us, by the way) have no place in this world. We are not scheduled. As dissidents, dissenters and in general.

I hope it is at least understandable? Or a vacation in the brain in full?

So, even a frank fool, or ... an ISIS sympathizer, may wish to shake hands with even a sympathizer of ISIS.

Which one will you be?