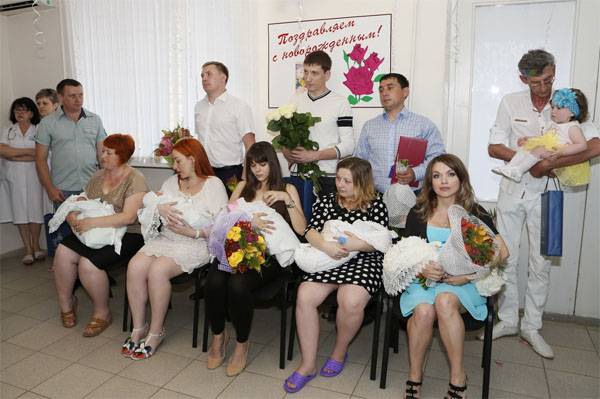 Moreover, mortality rates continued to decline in the country.

At the end of the “Forbes” material, the author even tries to reassure himself by giving the following phrase:

It is likely that with a further extension of the recession in the economy, the situation (...) may change. Even in countries with a developed economy and a more efficient social protection system, including a developed health care system, the economic recession still affects demographics. And I find no reason for Russia to suddenly become an exception to this rule.

Logic-s ... One compares Russia with Bangladesh (while in Bangladesh, with an economic collapse, everything is so “in order” with demographic indicators that a population that is larger than the population of the Russian Federation lives in a territory about the size of Tajikistan), the other is killed about that the population of Russia “does not die out” ... In general, the logic of the “partners” is the same: they literally dream of the territory of Russia as of the territory of Bangladesh with the level of Bangladeshi “technologies”, constant civil strife and at the same time an endangered people. Yeah ... It is literally a day-to-day dream of those who, since the end of World War II, pondered: which regions of Russia (USSR) should they drop atomic bombs of "democracy" for greater effectiveness ...

Now it is worth referring to those indicators that so outraged one of the authors. Forbes.

According to Rosstat, the fall of the Russian economy in 2015 was about 3,7%. In 2016, a drop is expected again, but significantly lower - no more than 0,8% (the World Bank forecasts up to 1,5%). What about birth and death rates? Things in this area are as follows (if you believe the indicators of the same Rosstat):

For the period from January to April, about 605 thousands of babies were born in the Russian Federation. This is about 6 thousand people less than the same period last year. However, at the same time, mortality, including infant mortality, has decreased by almost 30 thousand. The natural decline in the population still manifests itself - about 37 thousands of people for a specified period. However, the new tendency to reduce natural losses suggests that by the end of the year, the indicator may again either go to zero or be replaced by a natural increase.

It is noteworthy that the death rate in the Russian Federation is declining for all categories of causes. Thus, according to the country's main statistical office, on a monthly comparison (for April) of 2016 and 2015, the mortality rate from tuberculosis decreased by 319 cases; on 1072 cases - from neoplasms, including malignant ones, on 218 - from alcohol poisoning, on 655 - from pneumonia, on 230 - from cases on transport (including accidents), on 5493 from ischemic disease, on 109 - from hypertension, on 695 - from from diseases associated with circulatory disorders. In addition, on the 284 case, the death rate from suicide decreased, on 32 - from murder. The increase in the mortality rate was observed only in three categories: deaths from influenza and acute respiratory infections (plus 21 case compared to April 2015), intestinal infections (plus 2 case) and from accidental drowning (plus 31 case).

General indicators of reducing infant mortality also can not be encouraging. The number of children who died before the age of 1, on 1000 born in January-April, 2016, was reduced to the 6,1 case. Over the same period of 2015, 6,7 cases were noted. For comparison: the average infant mortality rate in EU countries is 5-5,2 cases, in Ukraine 8 cases per 1000 people. Moreover, if in the EU the trend develops towards the decline in the percentage of infant mortality, Ukraine is experiencing its growth (about 0,4 cases compared to January-April 2015).

Over the past 12 years, infant mortality in Russia has declined by more than 40%. The leaders among the regions with low infant mortality in the Russian Federation include: the Nenets Autonomous District (zero deaths from January to April 2016), the Chuvash Republic (2,6), the Novgorod region (3,7). There are alarming indicators in this regard in the Chukotka Autonomous Region (26 infant deaths on 1000 born), in the Jewish Autonomous Region (18) and Karachay-Cherkessia (10,4).

Birth and death rates in the regions of Russia, as noted by experts, are not directly dependent on their economic indicators. The availability of a relatively developed health care system and the possibility of obtaining real (but not paper) access to the population make a much more significant contribution to the processes. Although the developed health care system is actually also part of the economy.

Where local statistical services allow themselves to report on improving the quality of medical care provided, trying to gloss over the real situation, after a very short period of time, truth reveals itself in mortality, including infant mortality. In other words, it is pointless to hide real numbers when taking into account the presence of a large number of modern ways to check and compare such reports, including journalistic inquiries, which sometimes make it possible to reveal some “postscripts”.

It should be noted that in order to improve the demographic situation in Russia, the state is implementing a large-scale project called the State Program of the Russian Federation "Health development". The program is designed for the period up to 2020 of the year and in its essence, from the point of view of national security, it is certainly no less important than the program of reform and re-equipment of the Russian army.

It is encouraging that for 4 year before the end of this program, some goals set by the state have already been achieved. In particular, the Ministry of Health planned to reduce infant mortality rates to 6,4 (for 1000 born) by 2020. As it was said in the material above, for the first 4 months of the current year this indicator is fixed at the mark of 6,1.

A very ambitious task is the state to bring life expectancy in Russia to 74,3 years to the year 2020 mentioned. At the moment, this figure is 71,4 of the year.

Among the goals: anti-tobacco and anti-alcohol. They are associated with the intentions of the Ministry of Health to reduce the percentage of the number of people consuming tobacco and tobacco products among the adult population of the country to 25% and among adolescents to 15%. Alcohol - up to 10 l (in terms of pure alcohol) per person per year. While alcohol consumption is 11,2 l.

It is worth noting that a set of certain measures already leads to positive results. Over the past 3 of the year, the number of tobacco users in Russians has decreased by almost 12%. In terms of alcohol consumption 10 years ago, Russia was in 3-th place in the world (after Moldova and the Czech Republic), now - on 8.

The health improvement program, of course, is directly dependent on funding from the state. And if this funding is not cut in favor of those who declare savings more important than the health and lives of Russians, then most of the goals will really be achieved. And how will not the "Forbs" experts react? - the problem of the Forbes experts themselves.

Ctrl Enter
Noticed oshЫbku Highlight text and press. Ctrl + Enter
We are
Again about fertility. The most important factors of the demographic situation in modern RussiaResults of the week. “I have sawdust in my head. Long words only upset me. ”
Military Reviewin Yandex News
Military Reviewin Google News
145 comments
Information
Dear reader, to leave comments on the publication, you must sign in.