13 2016 June
89
30 May on Ukrainian television released a continuation of the legendary cartoon about the Cossacks. Heroes went on a tour of Europe (where else?), Where they fully share European values ​​and demonstrate to foreigners their mastery of a soccer ball, using it not only as a sports attribute, but as a storage tank for Turkish gin or as a stopper for the volcano Eyyafyatlayokudlya. 15 of the new series is significantly inferior to its forefathers “How Cossacks Played Football” in wit and in time (2 min.), Although the author of the images of Zaporozhian Cossacks, a remarkable cartoonist, Edward Iyich Kirich, participated in their creation.


But those times are not the same ... Yes, and the screenwriter-director of cartoons about Cossacks, Vladimir Dakhno, rested long ago. And with him went the magic. Out magic ...

According to the soloist of the Kozak System group (I think, they decided to get his authoritative opinion because of the word Kozak in the name of the group.

Catch: kozak, Cossacks? ..): “We need to form an image of a successful male Cossack, to whom the sea is knee-deep, which can save, protect, come to the rescue, and at the same time laugh at himself ...”

In the New Cossacks somehow did not find it. Although I tried ...

A peeing boy was torn off in Brussels and the burning football stadium was extinguished with the help of his “fountain”.

The fall of the crystal chandelier on the head of the Queen of England was prevented, for which she granted them a knightly title.

They put the ball at interest in the Swiss bank 3 - every hour they received a new ball. Enriched! And in the evening, their cool “Lamborghini Convertible” (exchanged for balls, as I understand it), the oxen dragged in tow, like Makhno's car, home to the hut.

Well, everywhere the Cossacks, of course, fall for a marvel, and it does not matter: you are a French from a support group or a bronze mermaid from Copenhagen ...

Yes, there was one true moment! In Ireland, the thing happened. Leprechaun asked a Cossack coin for his magic pot, and they honestly-honestly confessed: "Grosz is mute ..."

In general, the expectations of the new cartoon did not meet. Pride for the Cossacks did not add, visa-free regime is not closer ...

But he pushed for the creation of a comic about the Russian-Ukrainian friendship and mutual assistance of fraternal peoples.

So it will be true!

It’s not good to sneer at the good heroes of my childhood. And do not compare the image of the Zaporozhye Cossacks with svidomitami.

Dakhno Cossacks are good, honest and brave friends who are ready to come to the rescue and provide support at any time. They are not only good athletes, but also excellent warriors, fighters against injustice, theft and rudeness.

I want to present you my vision of what the continuation of the story about the fascinating travels of the Cossacks would look like today. And let Eduard Ilyich Kirich forgive me for using images of beloved heroes (I sent a letter to his name), but I believe that the Cossacks - as a symbol of freedom-loving Ukraine - could become such a bridge of friendship between the Russian and Ukrainian peoples. In his comic, he tried to unite the efforts of Russian warriors and Zaporizhzhya Cossacks to fight evil, injustice, hatred and aggression.

I understand that it is difficult to do now in the real world. But I want to present it in the cartoon world of comics. The brothers will make up sooner or later anyway. This is, in fact, the meaning of fraternity.

And let this drawn история will be prophetic! 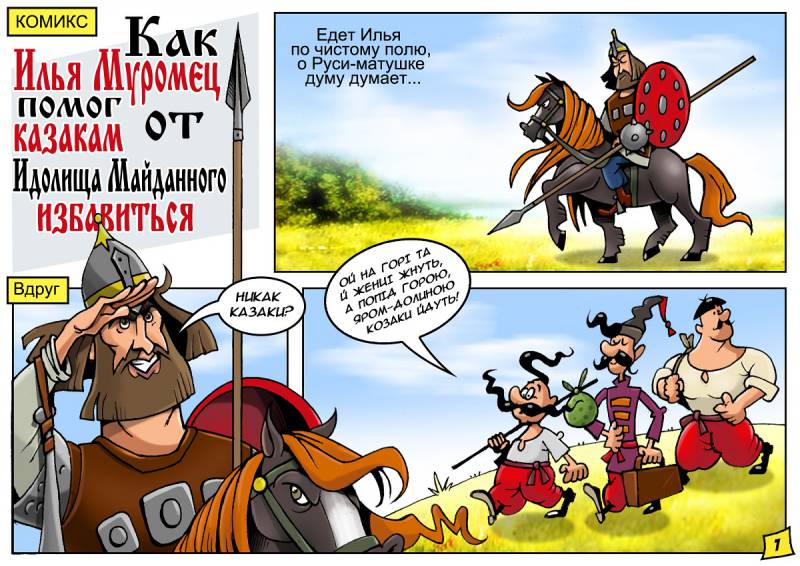 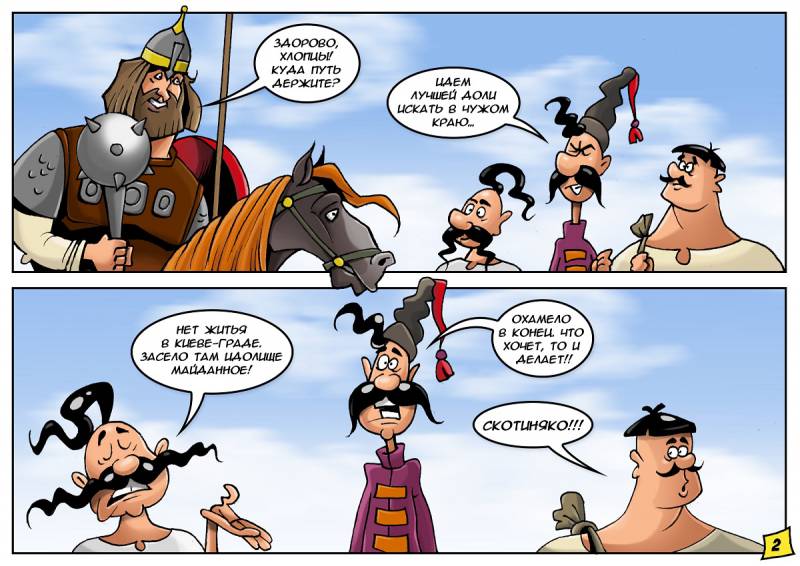 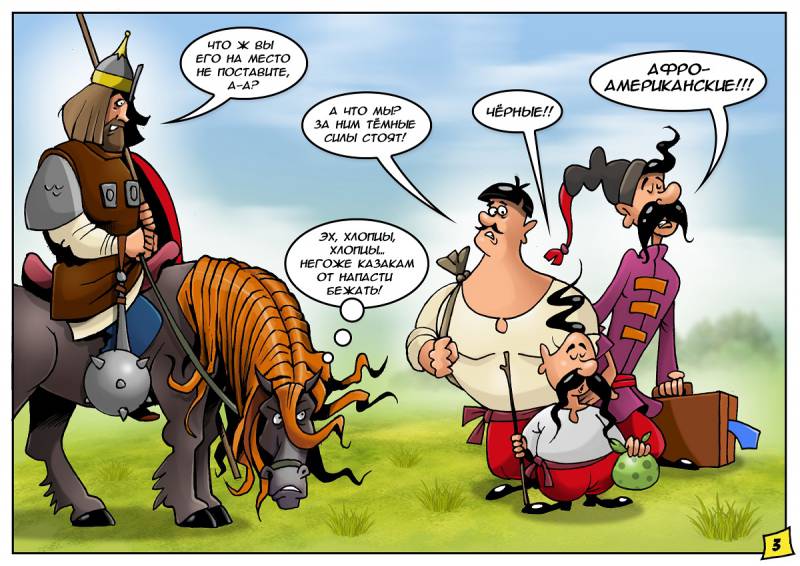 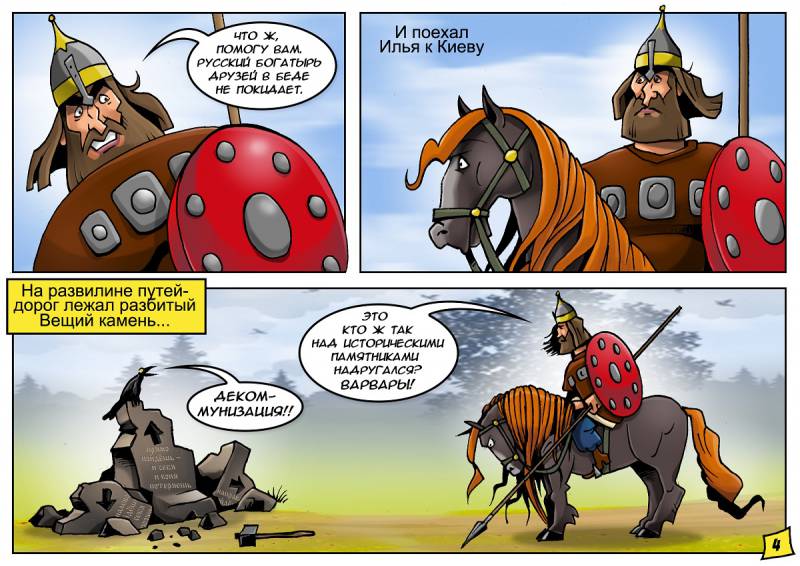 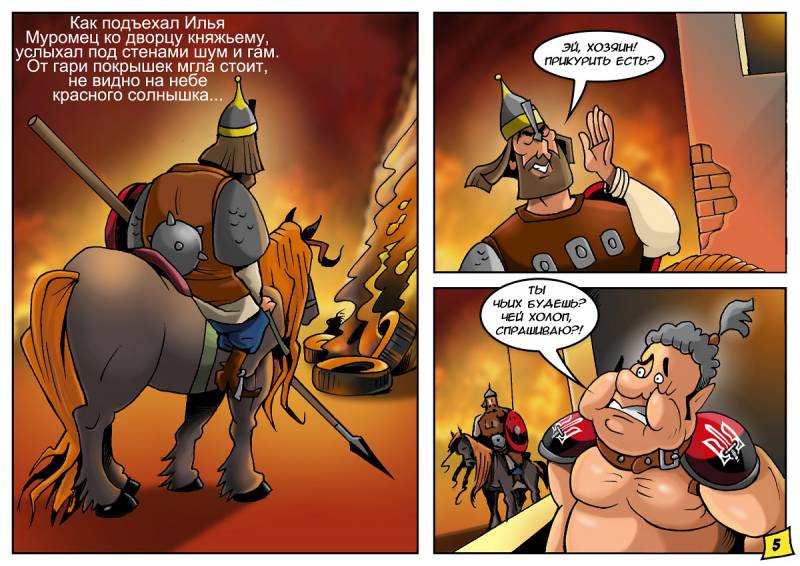 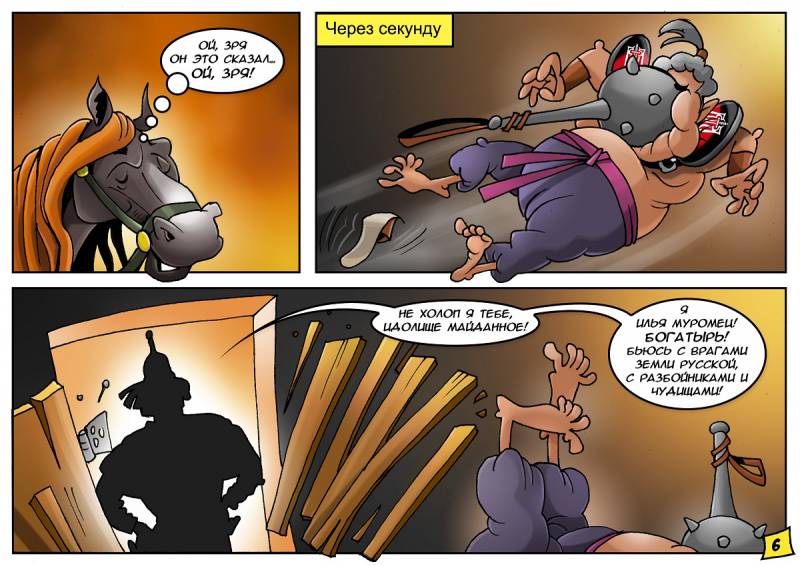 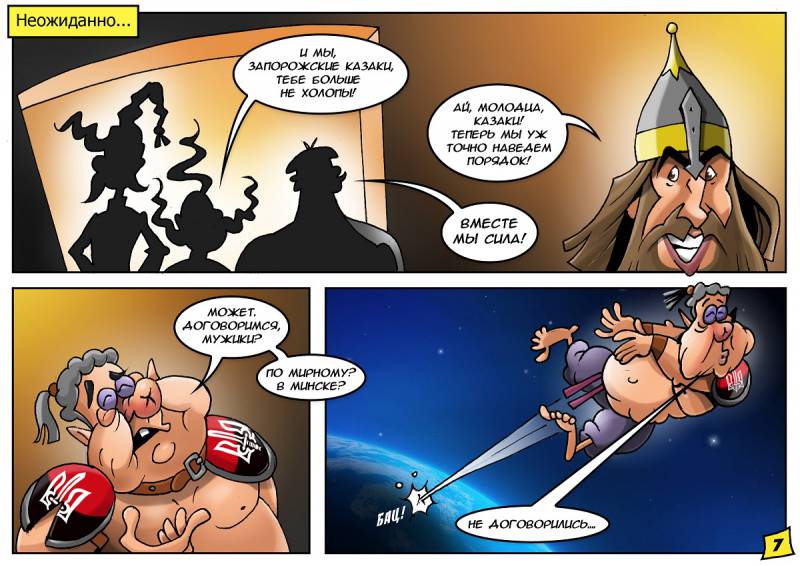 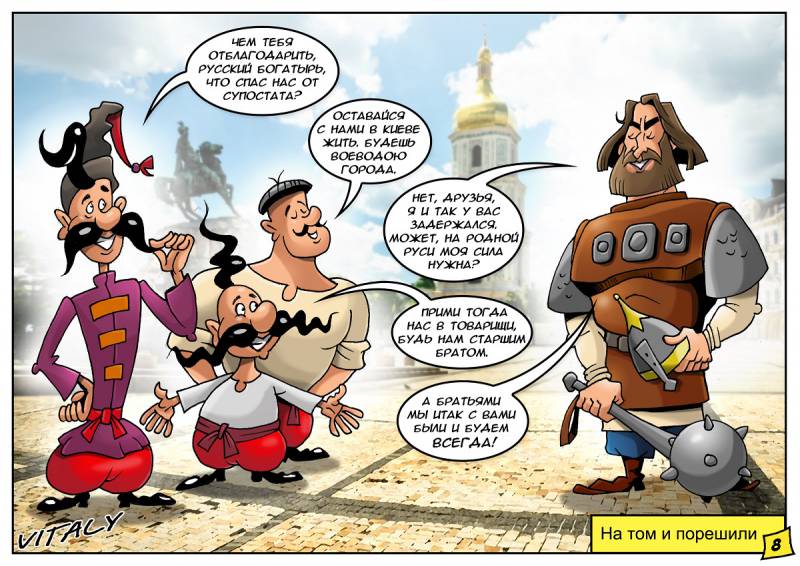