How the USAF defeated the Luftwaffe 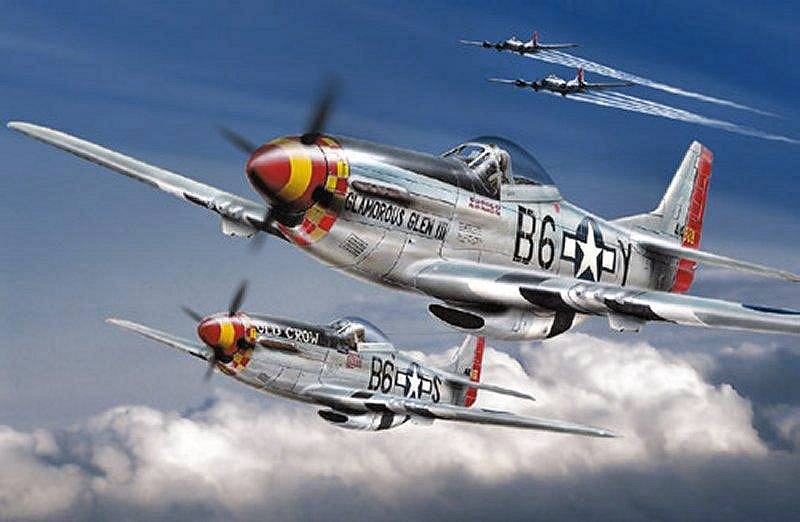 In the midst of the war, the US Air Force completely abandoned disguise. Instead of the traditional light colors (sky colors) on the lower surface of the wing and the green color on top (to merge with the ground), only the glare of aluminum remained. Only the markings and the dark stripe in front of the cockpit are preserved from the coloration, in order to protect the pilot's eyes from glare on the polished metal.

This measure allowed not only to reduce the cost and speed up the production cycle, but also to improve the aerodynamics of the aircraft: smooth metal lining created less resistance than enamel.

But the main thing was the essence of the decision. Waiver of disguise as one of the most important principles of warfare testified to the absolute contempt for the enemy.

The once formidable “Luftwaffle” lost all regalia and with a bang lost the battle for air. The reason was the banal lack of minds and a culture of production. The Germans were unable to establish a serial supply of turbocharged engines and create a reliable aviation motor power over 2000 hp Without all this, the Luftwaffe came to a quick and inevitable end.

The bet on the missiles did not materialize. In fact, the German rocket engineers were ahead of everyone just because no one seriously competed with them. Experiments with rockets have been conducted since the beginning of the century, but did not find military use until the appearance of accurate targeting systems (the second half of the 20th century). Therefore, all these “Fau” had no combat value and were suitable for terrorizing the population of large cities. As well as jet fighters, whose engines, created by 40-s technology, had a lifespan of only 20 hours.

Based on the technological level of those years, the most logical solution was the improvement of piston engines and structures of existing aircraft. Turbocharging, cockpit ergonomics, reliable armament, sights, communications and battle controls.

When meeting with the "Mustangs" and "Thunderbolts" it turned out that the Germans have nothing.

“Mustang” - a plane from the future

The pilots flying the North Amerikan P-51 modifications “D” had such things in the cockpit that are associated with a much later era:

- Tail radar warning AN / APS-13. The system caught the enemy at a distance of 800 yards (~ 700 meters). When an enemy fighter appeared from behind, an alarm system in the cockpit was activated. “Make a barrel, immediately! Get out! Leave! ”;

In the heat of the air battle, the pilot tried to keep the enemy in sight. At this point, the K-14 device, which measured the acceleration and angular velocity of the roll, determined the advance to the selected target. At the right time the computer gave the command to open fire. If the pilot pressed the trigger, the tracks of the fired bullets with diabolical accuracy intersected with the target.

The invaluable combat experience that our Pokryshkins mined in hot fights, risking their lives and paying with blood, got to every American cadet along with a diploma of completion of flight school. They shouldn't have fought 10 once to figure out how to aim correctly and when to open fire, the automatics did everything for them. Given that, without this experience, the chance of survival was small. The dead are eternal memory, the survivors are the glory of the air aces.

Aces could see the enemy without the control system of the rear hemisphere, as well as shoot without analog computers. But it is impossible to overstate the importance of such tools for beginners or not too lucky pilots, "extras." Which was given the chance to shoot down their first and only aircraft, or at least hold out until the end of the battle.

All this equipment was mounted not on 5-10 experienced boards, but on thousands and thousands of serial hawks!

Coupled with a multichannel radio station, a radio navigation system and an IFF respondent (“friend or foe”), to competently coordinate their actions and facilitate the work of ground-based radar operators. 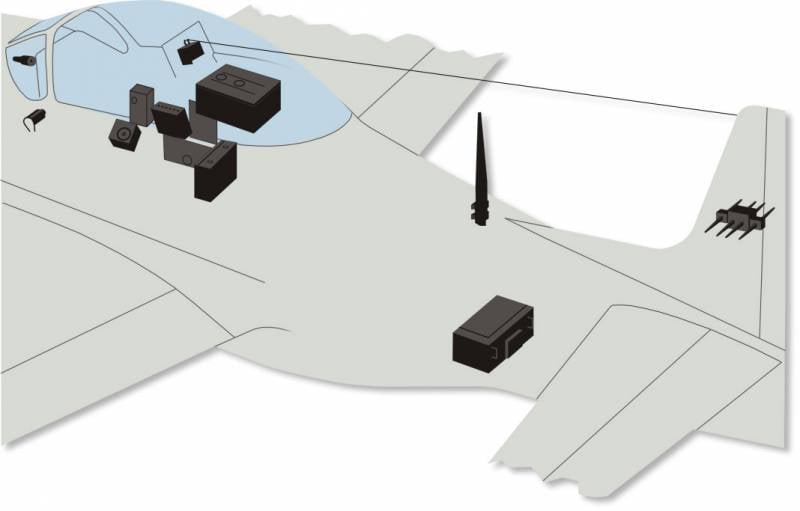 Arrangement of avionics on fighter "Mustang"

Drop-shaped lantern with a great overview. Oxygen system. Suspended fuel tanks, using which the Mustang, having risen from British territory, had the opportunity to conduct an 15-minute battle over Berlin, and then return to its base in Mildenhall.

Armament - six “Browning” 50-caliber. Selection weapons dictated by the situation. The main opponent is the Luftwaffe fighters, in “dog dumps” with which the maximum rate of fire and the duration of the queues were required.

Total salvo - 70 shots per second. Even before the six-barrel cannons and Hollywood special effects, the P-51D was called “circular”: its lines literally “sawed off” its tails and wings with a swastika.

And finally, the heart of the fighter.

By the middle of World War II, the designers had exhausted all the reserves for the modernization of aircraft engines. The only way out for a radical increase in performance was the installation of a turbine on the exhaust pipe. Using the energy of hot gases (up to 30% of the engine's energy!) To pressurize the air into the carburetor.

Work in this direction was carried out in each of the warring powers, but only the ocean could bring the idea to mass production. Licensed Rolls-Royce “Merlin” (“small falcon”) with a turbocharger of its own design allowed the “Mustang” to fight at heights above 7000 m.

In terms of flight performance, the P-51D was undoubtedly the best fighter of the Second World War. Due to its technological design, it was launched with a series of more than 15 thousand aircraft (including the 8156 modification “D”). 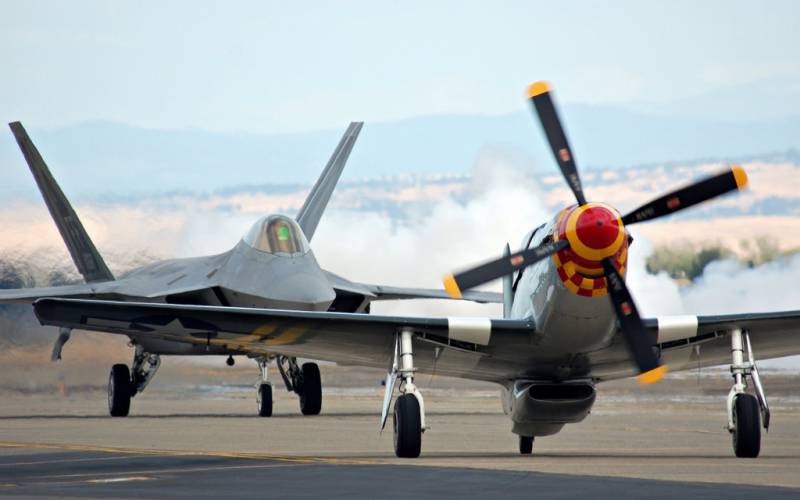 Take-off weight of 8 tons and combat load, like the two Il-2 attack aircraft.

This was Ripablik P-47 “Thunderbolt”, created by the efforts of the Russian-Georgian aircraft designer Alexander Kartvelishvili.

According to the equation of the existence of the aircraft, when installing any additional load (gun, oxygen system, radio station) to maintain the original LTH will have to proportionally increase all other structural elements (wing area, the volume of fuel tanks, etc.). The weight spiral will twist and rest against a critical parameter - engine power.

In other words, in the presence of an engine of greater power, you can safely increase the take-off weight and install any equipment without compromising the flight characteristics of the aircraft.

During the war years, this engine was put on many famous aircraft, incl. naval fighters “Hellcat” and “Corsair”. When landing on the deck of the ship R-2800 “Double Wasp” presented considerable threats. At low speeds, its monstrous torque threatened to lead off the course and turn the plane. Because of this, the Corsairs were forced to land at the “side”, around the circumference. But overland “Thunderbolts” didn’t have similar problems; everyone had enough aerodrome size.

Having received a supermotor at its disposal, the engineers of Ripablik Avieish designed the same huge fuselage, a “jug”, filling it with an impressive amount of equipment. 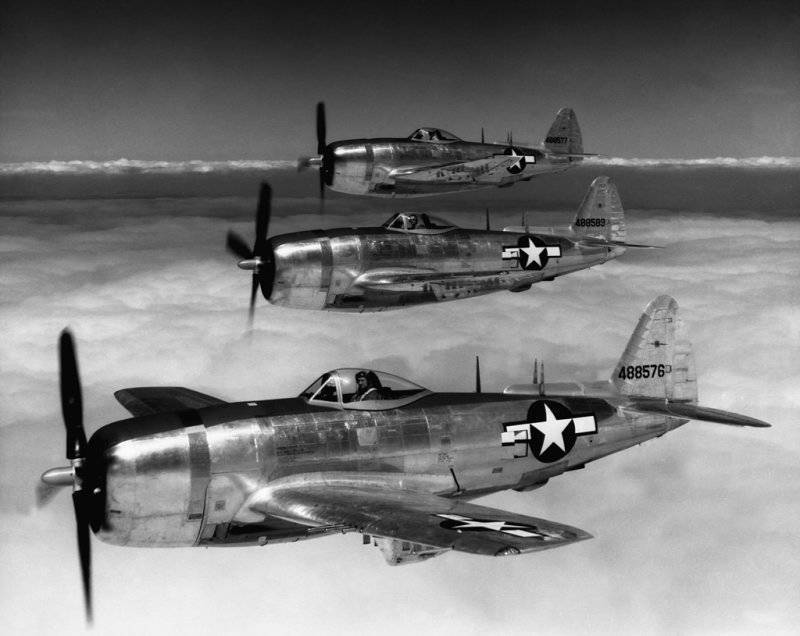 Eight points of built-in weapons with a total 3400 ammunition ammunition. “Thunderbolt” launched 85 large-caliber bullets every second, the name is the length of a continuous queue 40 seconds! Record for a fighter of the Second World War.

A ton of bombs or PTB on external hangers.

90 kilograms of armor plates. Front cabin “Thunderbolt” was covered with a huge engine, and behind - the second, additional, radiator and mechanisms of the turbocharger. With damage that P-47 lost its high-altitude capabilities, but continued to fly and still could fight.

A steel “ski” was installed under the cabin floor to protect the pilot during an emergency landing with the landing gear retracted.

A full range of amenities was present in the cockpit, including an oxygen system, a urinal, and an autopilot. The composition of the onboard radio equipment was not inferior to the “Mustang”.

You should not be ironic about the genius Kartveli, who turned a combat aircraft into a luxury airliner. The designer (himself a former pilot) knew his stuff. The drag coefficient of the thick-minded “Thunderbolt” turned out to be less than that of the small, narrow and thin “Messerschmitt”. The P-47 was one of the fastest fighters of its era. In horizontal flight at an altitude of 8800 meters, it showed the speed of 713 km / h.

It was a universal machine, the ancestor of the modern class of fighter-bombers. High-speed attack aircraft, able to stand up for themselves in air combat. In another scenario: a long monotonous flight next to the “boxes” of strategic bombers. 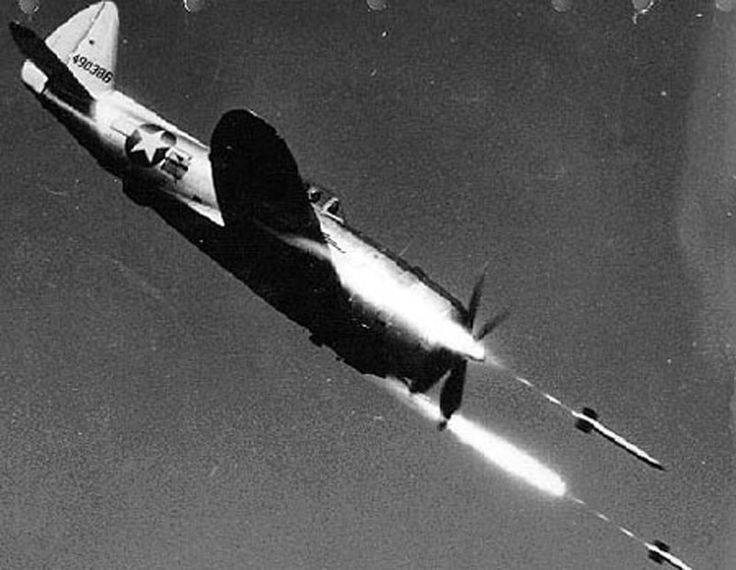 During one of these attacks, the tank of the famous ace Michael Wittmann was burned (138 victories)

Here is such an amazing attack aircraft, hunter for tanks and an escort fighter. Whose design contained much more amazing devices and innovations than any German “wunderwaffe”.

With regard to the experimental technology of "tomorrow," then over the ocean, too, did not sit idly. Only, unlike the fascist bastards, the winners did not rush to promote their secret development. 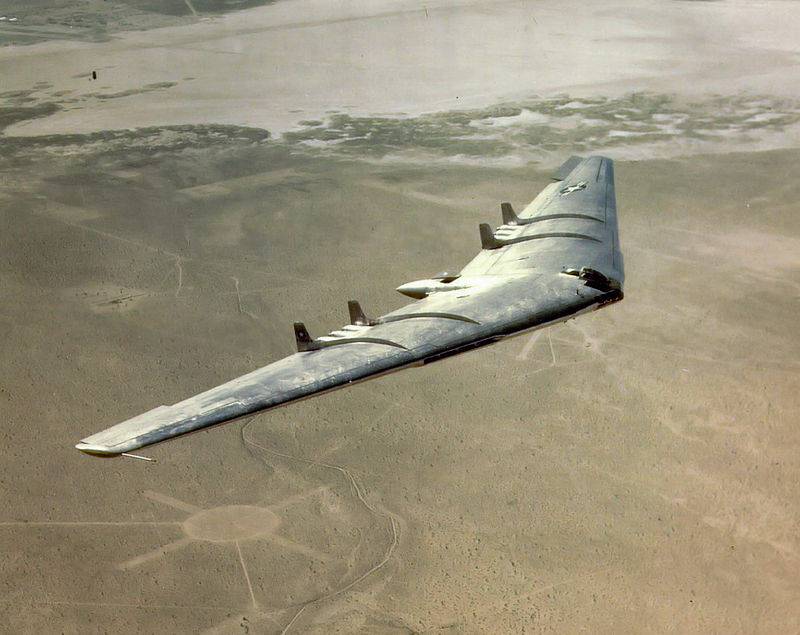 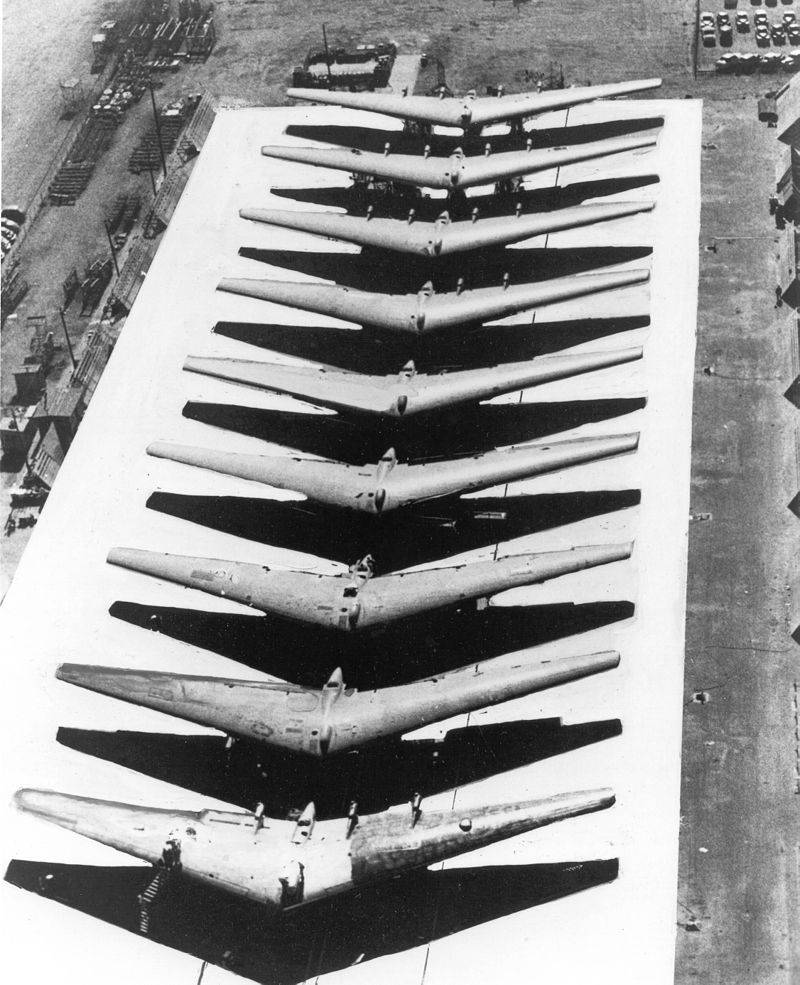 In contrast to the mythical flying saucers of Hitler, these very real cars remained buried under the dust of time.