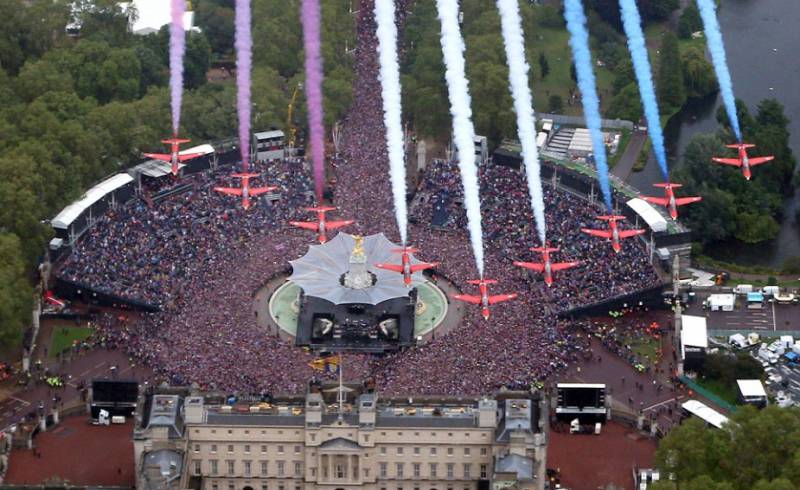 On June 11, 2016 in London, a traditional military parade was held in honor of the birthday of Queen Elizabeth II of Great Britain, in which more than 1600 royal guardsmen, as well as horse guards, took part. Sailed across the Thames flotilla ships, and Royal Air Force planes flew over Buckingham Palace.

This year, on the occasion of the round date of the celebration lasted three days, as the Queen celebrates 90 anniversary. A series of anniversary events began on April 20, on the eve of the Queen's birthday. Queen Elizabeth was born on April 21, but traditionally the English monarch's birthday is celebrated twice. The first time is the birthday itself, and the second time is in June, when warm weather is established and public events can be held outdoors. The second celebration is the official birthday and is celebrated with a military parade.

June 11 - Queen in an open phaeton drawn by a pair of horses, took the parade of "carrying out the banners" (Trooping of colors). As always, thousands of people watched this, but this year the attention to this event was unprecedented. No less expected than the parade, was the traditional exit of the entire royal family on the balcony of Buckingham Palace. 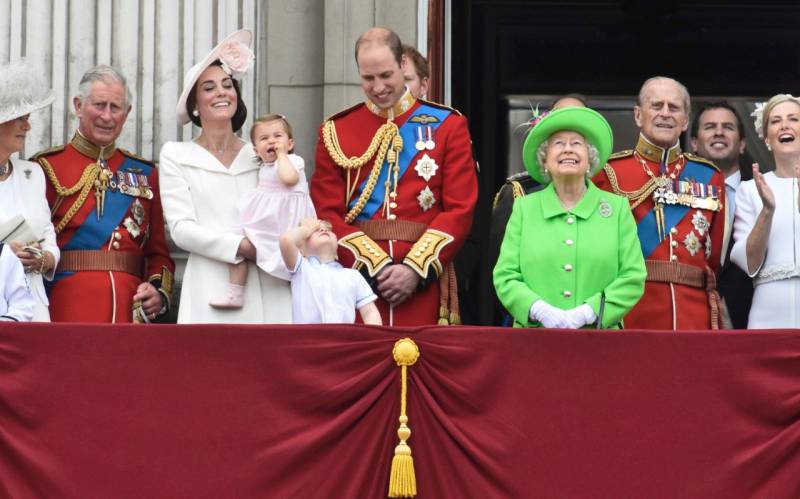 Official events ended with a parade. The queen and her relatives greeted the crowd on the square, after which they watched the ceremonial flight of the aircraft of the Royal British Air Force (RAF). 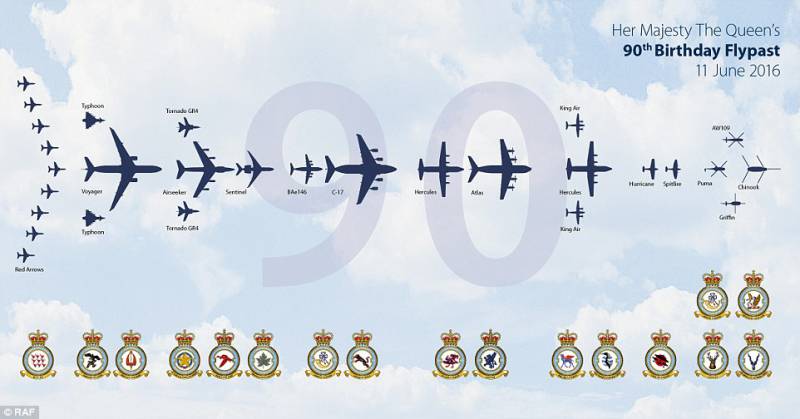 15 of various types of aircraft took part in the celebration of the anniversary of Her Majesty, five of which are currently provided by squadrons celebrating their own 100-th birthday. 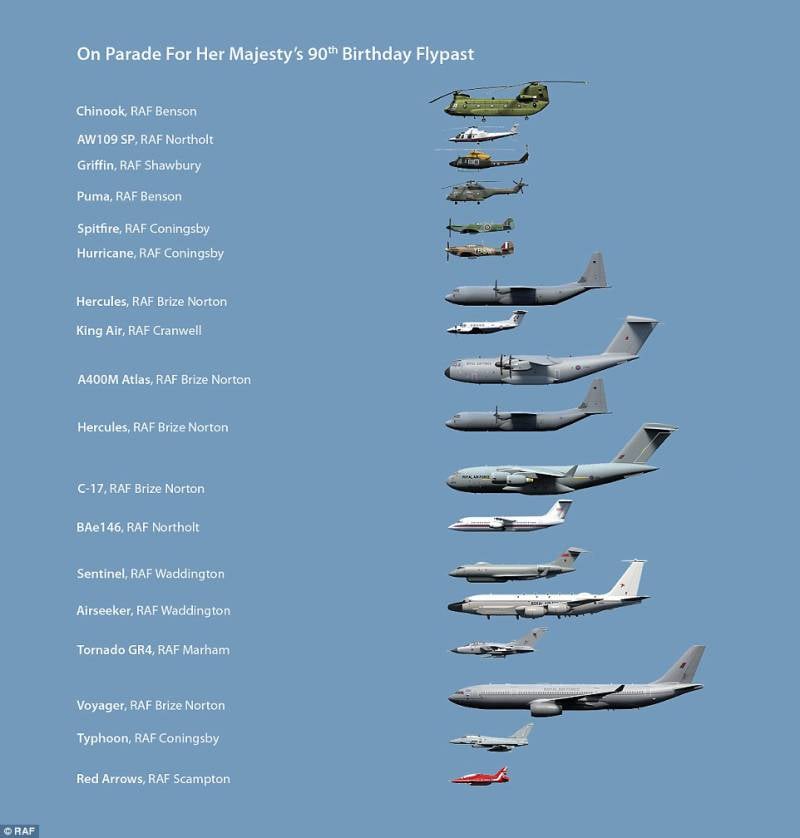 RAF airplanes and helicopters involved in the air show

In the parade with an interval of 30 seconds passed eight groups, each of which was from two to nine aircraft. The parade was opened by helicopters Chinook CH2, Griffin HT 1 (British version of Bell 412), Puma HC1 and AW109SP from different helicopter squadrons. 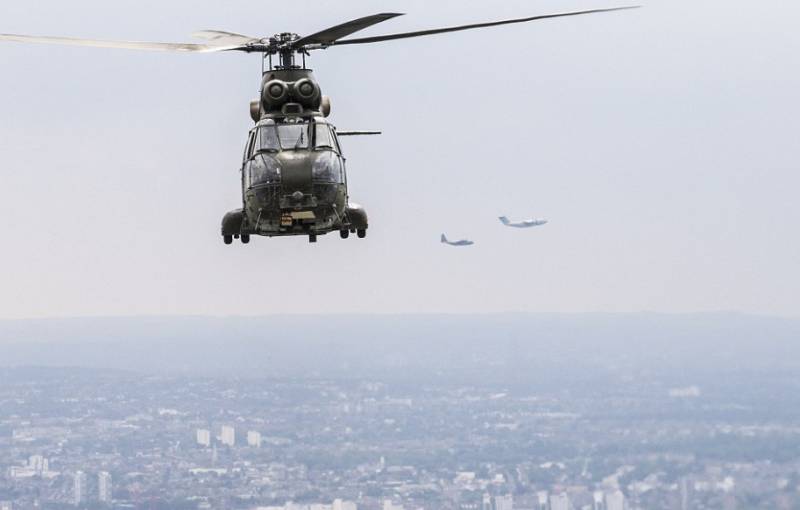 Heavy military transport helicopters Chinook CH2 were purchased in the USA, Griffin HT1 and Puma HC1 were built under license, AW109SP is a joint British-Italian project. 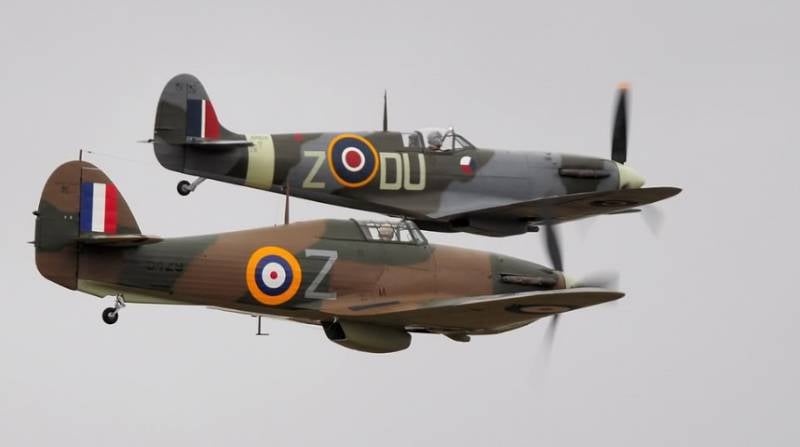 Following the wing-to-wing helicopters were reconstructed piston fighters from the Second World War, the Spitfire and Hurricane. Such fighters took an active part in the air battle for Britain. 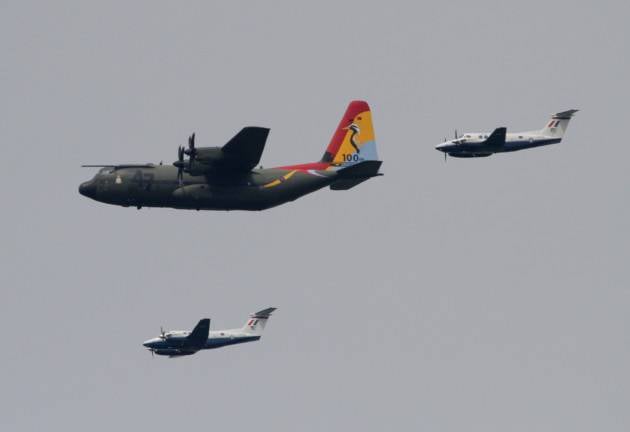 Military transport aviation The UK was also represented by another Hercules C4 and A400M. Despite the fact that the S-130 itself is not a very small aircraft, but against the background of the Airbus A400M Atlas, it looked modest. A400M, which is a product of cooperation between aviation companies in Europe and the USA, has just begun to enter the arsenal of the Royal Air Force. 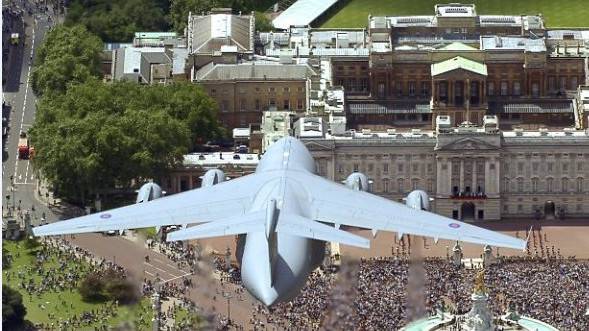 Next in the line of transport vehicles were C-17 Globemaster III and BAE 146. American-made C-17 is capable of transporting more than a hundred military personnel. Flight range with cargo weight 76 650 kg - 4 445 km. The British Air Force has eight C-17 transports.

The RAE BAE 146 is used in two versions - for delivering small loads and transporting senior officers. The aircraft with a VIP-cabin is designed for 19 passengers. The Royal Air Forces operate four BAE 146.

American-made reconnaissance aircraft RC-135W based on Boeing-707 were replaced in the UK by Nimrod R1, which, for financial reasons, were abandoned in June of the year 2011. RC-135W has a wide range of capabilities for detecting and identifying radio frequency spectrum emissions and jamming. It can be radiation of radar and air defense guidance stations, as well as signals of radio relay lines and mobile phones. Today in the RAF and there are two aircraft RC-135W.

Sentinel R1, built on the basis of the Bombardier Global Express, is designed to monitor the battlefield using AFAR radar and optoelectronic systems, receiving and retransmitting data from the UAV. The aircraft may also be involved in the search for submarines. Currently in the UK there is 6 Sentinel R1.

Typhoon fighters at the moment in the RAF are the only aircraft designed to gain air supremacy and intercept. As of the beginning of the 2016, the British Air Force received 137 fighters, all ordered by the 232 aircraft. 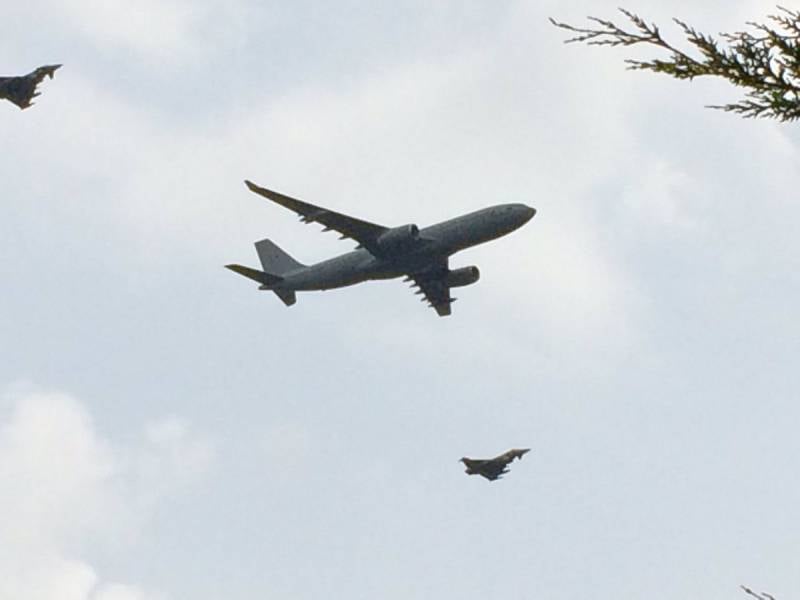 Voyager is a military modification of the Airbus A330-200 passenger airliner. It was created as a universal dual-purpose aircraft - tanker and transport. The Royal Air Force tanker fleet consists of six such vehicles.

Completed aerial parade nine Hawk T1 aerobatic team Red Arrows. The Red Arrows group has been flying the Jet Hawk training since the end of 1979. In total, the Red Arrows pilots made 4700 performances in 56 countries around the world. The red lightweight Hoki are equipped with a forced engine and special smoke generators with which you can produce colored smoke of blue, red and white. 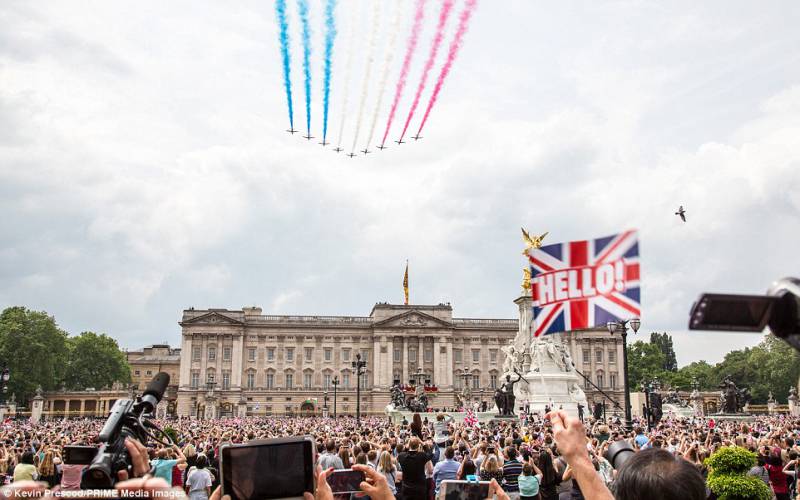 For a long time, Hawk Controller Family was leading in the market for training and combat training aircraft. Thanks to good flight data, this machine can carry weapons and be used as a light attack aircraft and fight subsonic aerial targets. In the near future, in the UK, early-firing trainings should be replaced by a new, modern Hawk T2 modification, which uses the Eurofighter Typhoon fighter's avionics.