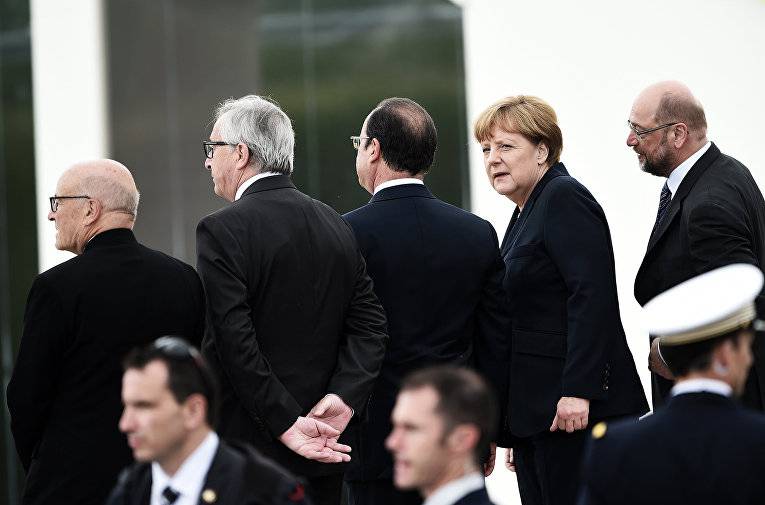 European Commission President Juncker next week will go to the economic forum in St. Petersburg. The Eastern Committee of the German economy demands termination of sanctions.

Berlin - Vladimir Putin will receive guests again next week in his hometown of St. Petersburg. And not only company executives who have been absent in recent years, such as the head of Siemens concern Joe Kaeser, Linde group board chairman Wolfgang Büchele and Uniper chief Klaus Schäfer, will gather there. Jean-Claude Juncker, President of the European Commission, will also arrive in Putin’s hometown at the International Economic Forum, although some countries of the European Union have expressed great dissatisfaction with this step.

“Moscow is strongly interested in a dialogue between the EU and the Eurasian Economic Union,” said Büchele, who is also the chairman of the Eastern Committee of the German economy (WCES). Previously, he met with Putin in Moscow. The head of Linde also expressed his support for “that Federal Chancellor Angela Merkel is also in favor of this dialogue,” which ultimately should lead to the creation of a single economic space from Lisbon to Vladivostok.

Merkel and Juncker want to win over Moscow and, with one major decision, make adjustments to the development of the conflict in Ukraine. This is an old recipe from the Eastern politics of Willy Brandt (Willy Brandt) and Egon Bahr (Egon Bahr), which at one time led to detente in the East-West confrontation. However, it is the former members of the Warsaw Agreement - the current members of the EU - that reject rapprochement with Russia.

Such a theme will arise at the latest in July, especially since by July 31 the term of EU sanctions will expire or be extended. In order to ensure unity in the EU on this issue, German Foreign Minister Frank-Walter Steinmeier (SPD) wants to propose easing the hard front and easing the sanctions burden in case the implementation of the Minsk Peace Agreements Ukraine will progress.

“We fully support the position of Foreign Minister Steinmeier,” Büchele said in Berlin at a meeting of members of the Eastern Committee on Thursday. It should create incentives to defuse the conflict for both parties - Russia and Ukraine. The Eastern Committee calls for “the beginning of the termination of sanctions”. Büchele, however, at the same time stressed that at the present time it is a question of such an “important gesture” as a weakening of the entry ban regime for Russian politicians than “significant easing of trade and financial sanctions”.

Greater concern, according to Büchele, is a matter of concern for the VKNE and the development of the situation in Ukraine. For example, the possibility of social unrest caused by a long recession in the economy worries. Despite the EU association agreement with Kiev, Ukrainian exports to Europe in 2015 were down by 7%. This, according to Büchele, is to blame for the fact that either the quality of the goods is unsatisfactory, or the goods due to the already oversaturated supply in Europe are not in demand.


As Büchele insists, billions of Ukraine’s support is now needed. On the other hand, he recalled the need for political progress in the reform process in Ukraine, and also that Kiev should again intensify trade with Russia. Only then, in his opinion, the country will be attractive enough for the investments of German firms.

The development of the situation in Russia, the chairman of the VKNE, described as twofold: on the one hand, the recession is being held not only because of Western sanctions, but also because of severely falling oil prices and the devaluation of the ruble as the national currency. On the other hand, it is “more optimistic” that German-Russian trade will reach its lower limit this year, and will even show some growth this autumn. In 2015, German exports to Russia fell another 25,5%, to 21,8 billion euros. From 2013, the level of German-Russian trade fell by a third, the exchange of goods between Europe and the largest country on Earth - almost 36% in general.

Ctrl Enter
Noticed oshЫbku Highlight text and press. Ctrl + Enter
We are
What worried European politicians who spoke about the crisis of the European Union?The head of the DPR visited Gorlovka, the cadets took the oath, and in the "Olympic" hosted the forum "Donetsk Republic"
Military Reviewin Yandex News
Military Reviewin Google News
60 comments
Information
Dear reader, to leave comments on the publication, you must sign in.