The symbol of the Cold War returns to the sky 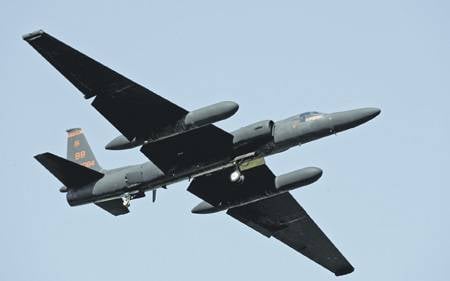 The United States wants to reanimate active practical flights of high-altitude aerial reconnaissance U-2 (ceiling over 21 km) that became famous during the Cold War. Moreover, a squadron of such aircraft may well be placed in Europe - in close proximity to the Russian borders. About this in March, wrote the British daily newspaper Independent, citing the words of the then commander of the NATO Joint Armed Forces in Europe, the American “hawk” Philip Breedlove. “The European command of the US Armed Forces needs additional intelligence gathering platforms, such as U-2 and RC-135. This is necessary in view of the increased need for such information, ”says the publication of the words of the commander.

It is noteworthy that the American General Breedlove was born in 1955 — the year when the first U-2, called Dragon Lady (“Lady Dragon”), took to the air. Independent also quoted him saying that “in the long run, Russia poses an existential threat” to the United States. Wow, what an original word in the mouth of the military! And after all, there are no synonyms for it, only “being”. But what to the forehead, what to the forehead, because in combination with the word “threat” it sounds very frightening. This is not any “fashionable” informational or hybrid wars with “polite people” on the unmarked trenches of the front line! And therefore, they say, the “appeal” to the European theater of military operations of the U-2 and RC-135 aircraft seems to be obvious, it suggests itself. Bridlav himself, while in the post of commander in chief, did not throw the wind in this sense of the word - he also used the available opportunities. The April 14 Baltic incident with the RC-135 approaching the Russian territorial waters, when the Su-27 fighter made a “barrel” around the American intelligence officer, is a graphic confirmation of this.

Military experts interviewed by the British newspaper unanimously suggested that if the request of the NATO strategist is satisfied, then U-2 and RC-135 will probably collect data on the Russian naval forces and coastal forces during the assignments. But at the same time they will not cross the airspace of the North Atlantic bloc. They say that in America, of course, they did not forget how 1 of the year 1960 in the Sverdlovsk region (now Yekaterinburg) was shot down by U-2, which was considered invulnerable to Soviet air defense forces, piloted by Francis Powers. And the very first ground-to-air missile (of the eight released) attacked an air spy from the Soviet Dvina C-75 anti-aircraft missile system.

The Pentagon has still not commented on the proposal Bridlove. A source familiar with the programs of the US Army connected with Europe told the Independent that “although there is no information in the public domain about the deployment of U-2 to obtain data on the Russian Federation, this does not mean that there will be no such use of reconnaissance aircraft for this purpose” .

WAS PLANS FOR THE LISTINGS?

Meanwhile, a lot of interesting information has appeared about Dragon Lady and “made famous” by the captain of the US Air Force, and then by the CIA Powers employee in recent years, 10.

It is strange that the name U-2 generally flew from the lips of General Bridlaw. After all, back in January 2006, when he was deputy commander of the 16th aviation group at the Ramstein airbase, the US Department of Defense announced that it intends to send these spy planes "to retire." One of the largest news agencies in the world - United Press International (UPI, USA) - with reference to an anonymous source, even then announced the deadline by which these reconnaissance aircraft were to become “junk” and museum items - 2011. Moreover, the deadlines for the decommissioning of the “high-altitude” were scheduled for years: in 2007 it was planned to write off three such aircraft, in 2008 - six, over the next two years - seven aircraft each, and finally, in 2011 - the last ten. Total - 33 air reconnaissance during the "five-year period." Judging by the report, U-2 modernization plans were not even considered.

In the same January, the American online publication Strategy Page, which positions itself as a source of up-to-date information on military topics, as if confirming that the U-2 will be decommissioned by the American army, confidently said that they would be replaced by Global Hawk reconnaissance aircraft. “Both airplanes do not differ in size and are equipped with the same equipment,” the publication noted as the case was almost resolved. “However, due to the lack of a pilot, the Global Hawk can be in the air twice as long as the U-2, namely the 24 hour.” And it indicated that in five years, as the Dragon Lady, which has been serving for half a century, has been written off, the United States plans to purchase more 40 of such unmanned reconnaissance aircraft, which have been created over the last 10 years.

This information has become interested in the Russian news agency RIA. News. The press service of the US Air Force told him that only in 2004, new unmanned reconnaissance aircraft carried out about 50 missions in Iraq, provided about 12 thousands of images and flown a thousand combat hours. And 1 – 2 May 2000, the Global Hawk first flew the Atlantic Ocean from the USA to Europe. In 2001, a similar non-stop flight was made between the United States and Australia across the Pacific Ocean — a record distance for unmanned aircraft. He flies, however, "a little lower" U-2 - the maximum ceiling 19,8 km. But he has many other great advantages.

However, in the 2011 year, neither the “advanced” UPI nor any other agency made it clear to the world community that these quite explicable plans for parting with the Dragon Lady were somehow realized. Neither with reference to official information, nor to the data of any "secret" source.

The reason for throwing such information could well be the "round date" of the flight and the downing of Powers, which in 2010 was even modestly noted in Moscow. The son of the spy pilot Francis Gary Powers Jr., who founded the Cold War Museum in the USA, came to the Russian capital on the 50 anniversary of the event.

It is interesting that he met then with one of the developers of the Dvina air defense system - the designer 88-year-old at the time, Karl Alperovich. The latter told the guest that the C-75 system was created as soon as possible after July 1956, when American U-2 systematically violated the airspace of the USSR, and in September, the 1957 divisions armed with this complex began to enter the troops. “We have completed our task. It was a significant step in the creation of air defense equipment in stories of our country, - enlightened the Soviet and Russian scientist a descendant of an American spy pilot. “C-75 shot down U-2 Powers and subsequently won the war in the skies over Vietnam, where about a thousand American planes were destroyed with its help.”

By the way, from 29 winged U-2 serial American reconnaissance aircraft, lost for various reasons since May 1956, seven were shot down by the C-75 air defense system: one each in the USSR and Cuba, a couple - in Taiwan and three aircraft - China The rest broke for technical reasons and because of the "human factor". No wonder, according to UPI, the American pilots did not complain about the Dragon Lady; This machine was also once created in an unprecedentedly short time, and then it is “found” by instability in a rarefied space, then it is difficult to control it on certain flight conditions.

“I am glad that Powers survived,” said Alperovich at the meeting. “It was a worthy man who courageously, without panic, accomplished his task.” In turn, Powers Jr. replied that his “father was a soldier and a victim of the Cold War and the paranoia that prevailed in those years in the USA when he returned home”: “He was primarily a military pilot, and then an intelligence officer and during interrogations at the KGB, he tried not to give out military secrets. ” As for the latter, we will delicately disagree here, for Powers, who was fully exposed, had no choice but to give out this secret after portion.

Poshing at the borders

And since then, as it was announced “Good bye, U-2!”, And five years after that year, how this machine should remain in the history of world aviation, the most prominent NATO commander, besides the military aviator, "Let out" about some possible plans for the return of U-2 to reconnaissance flights. At the same time, General Bridlove didn’t even remember the Lockheed mate, the Global Hawk drone,.

And what would it mean?

The answer is one: while the Global Hawk - “machine” is still “raw” and not cheap (in January 2012, the US Air Force decided to stop buying UAVs because of their expensive maintenance, and transfer the already purchased vehicles to the reserve) old man "Lockheed U-2 is much cheaper. And it began to emerge that with the “funeral” of the latter they obviously got excited. Especially since he has once again distinguished himself in reconnaissance over Iraq, supplying the command with images, from which they took more accurate information than from a photo from space. And in the 1991 year, again during the war with Iraq, with the help of U-2 more than half of all photos of the military zone were taken and traced to the 90% of all Iraqi targets. The old-time aerial intelligence officer experienced a series of upgrades and, according to the US Congress Research Service, could perform combat missions up to the 2050 year.

In the middle of the 2000s, pilots who did not like this car tried to insist on replacing Dragon Lady with Global Hawk. A drop of their patience overflowed so far for today the last and 29-e on the account of an emergency with a scout, which happened on 22 on June 2005 of the year. Then the U-2S with the hull number 80-1082, returning from a flight over Afghanistan, crashed during an approach at the Al Dhafra (UAE) airbase. At the sprinter, which turned out to be close to the ground, the PTO shaft from the engine suddenly collapsed, as a result of which the hydraulic systems and power supply simultaneously failed. The pilot had no chance to save the car and himself, and he died. And two years before that, near Seoul, flying up from the Osann airbase, the engine refused at the side of the number 80-1095. U-2S "nodded and sang," the benefit of the pilot was able to eject and received minor injuries upon landing; and three more people fallen car crippled on the ground.

Since then, however, the passions have cooled, and the military have once again concluded that it is not premature to write off U-2 beforehand.

Russia's permanent representative to NATO, Alexander Grushko, in the stuffing of information about U-2, the main European atlantist Bridlav, sees the preparation of public opinion. “I have not seen any statements from NATO regarding the possibility of using U-2,” he said on the Russia 24 television channel (VGTRK). “Most likely, if such a decision is made, it will be accepted by the United States.” That is, unilaterally, as is usual in Washington.

“A few things are absolutely understandable,” said the representative. - Of course, U-2 will not fly over Russia. If they are used, then only along the borders of the regions adjacent to the Russian Federation. ”

What is true is true, at least close to the Russian borders to spy on reconnaissance equipment. Let us say here almost with the words of a classic: it is unlikely that some newly-minted Powers will come up with the idea to try “one more time” to fly to the middle of the Urals. But somewhere over the neutral Baltic, any Su-27 will be able to spin a “barrel” around it ...