How a nuclear warhead works 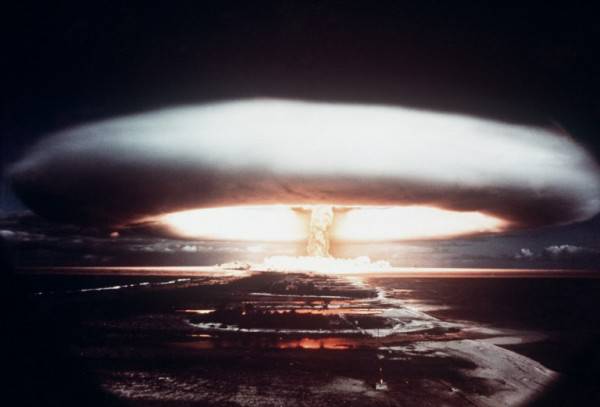 The entire bulk of intercontinental ballistic missiles, tens of meters and tons of superalloys, high-tech fuel and perfect electronics are needed only for one thing - to deliver a warhead to its destination: a cone about a meter and a half high and thick at the base with a man’s body. Most powerful weapon on Earth is very compact - a thermonuclear charge with a power of 300 kilotons (20 Hiroshima) is shaped and volume like an ordinary bucket.

In addition to the charge, there is a control unit in the warhead. It is also small in size - with a can - and performs several tasks at once. Home - undermining the charge at a certain, strictly calculated height. Nuclear weapons are not intended for use on the earth's surface - except to disable the underground launch pits of enemy ballistic missiles, Popular Popular Mechanics writes. 1200 meters are considered to be the optimum altitude of missile warheads. In this case, the blast wave reflected from the earth's body merges with the other, diverging to the sides, and enhances it - this is how the main striking factor of a nuclear explosion, the all-crushing shock wave, is formed.

Automation of the combat unit controls the steering engines: pneumatic or powder, and monitors the thermostatic charge stabilization, since the weapons-grade plutonium, of which it is, is in a normal state, it tends to heat up. In addition, the cone has an onboard power grid with power supplies and protection from electromagnetic impulses. All this farm is securely mounted on the shock absorbers and enclosed in a strong power frame, covered on top with a thick layer of thermal insulation.

I will go to the distant station

The technology by which warheads are separated from the rocket and placed on their own courses is a separate big topic about which you can write books. Therefore, we just say that today the "bus" scheme is used: the breeding unit in the right place brakes, turns around, releases the warhead - in order not to lead it astray, it can even turn off its engines for a while - then it accelerates again and follows to the next "stop". All this ballet takes place at an altitude of 1200 kilometers, where artificial earth satellites fly.

Separated from the last stage, the combat unit reaches the top of its trajectory, and then begins to fall towards the Earth. It enters the atmosphere at an exorbitant speed — 15 times faster than sound — its outer shell heats up to five to six thousand degrees and begins to burn. The worst part is the bow - in the warheads it is made of quartz and covered with the thickest layer of thermal insulation. However, the sides are not good either: the air turned into a plasma polishes the burning surface of the warhead like sand or emery paper, taking away the heat-shielding coating.

At an altitude of 50 kilometers above the surface of the warhead enters the dense layers of the atmosphere and is experiencing powerful negative overloads: the air slows down it no worse than the concrete wall - the accelerated car. This is where the power cage works together with shock-absorbing mounts - otherwise the contents of the combat unit will be derailed from the regular places, breaking the power and communication cables.

Bound by one goal

Thermonuclear charge and control unit continuously communicate with each other. This “dialogue” begins immediately after the installation of a warhead on a rocket, and it ends at the moment of a nuclear explosion. All this time, the control system prepares the charge to act, as a trainer - boxer to a responsible duel. And at the right moment gives the last and most important command.

When putting a rocket on combat duty, its charge is equipped to a complete set: a pulsed neutron activator, detonators and other equipment are installed. But he is not yet ready for the explosion. For decades to keep in a mine or on a mobile launcher a nuclear missile, ready to jerk at any time, is simply dangerous.

Therefore, during the flight, the control system transfers the charge to a state of readiness for an explosion. This happens gradually, with complex sequential algorithms based on two main conditions: the reliability of movement to the target and control over the process. Should one of these factors deviate from the calculated values ​​and the training will be terminated. The electronics translate the charge to an ever-higher degree of readiness in order to give a command to trigger at the design point.

A nuclear explosion occurs instantaneously: a warhead flying at the speed of a bullet manages to pass only a few hundredths of a millimeter, as all the power of a thermonuclear charge turns into light, fire, impact and radiation - and all this is a terrifying force.

Ctrl Enter
Noticed oshЫbku Highlight text and press. Ctrl + Enter
We are
Warhead: what's inside and how it works after separation from the rocketNuclear era. Part 6
Military Reviewin Yandex News
Military Reviewin Google News
26 comments
Information
Dear reader, to leave comments on the publication, you must sign in.