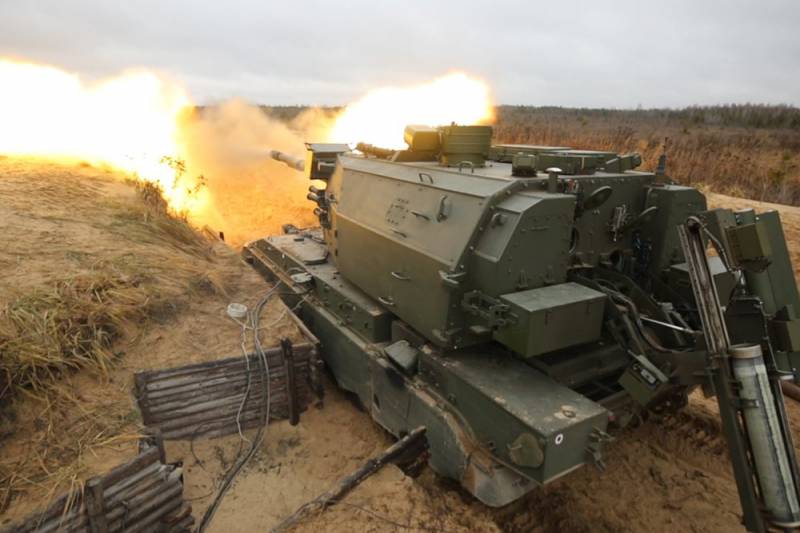 Lived: in the parades are already marching combat robots. And this is not a joke: the multifunctional robotic complexes "Uran-9" have recently passed on Hmeimim along with the usual technology.
About how far our military equipment has stepped, I talk with the host of the program "Military Acceptance" of the TV channel "Star" Alexei Egorov.

Alexey, a strong impression was left by the scene from your plot about combat robots. Especially when the creator of "Uranus" is experiencing it for himself: he gets in the way of the 10-ton machine ... Is this, let's say, a movie?

Alexey Egorov: It was so. But the speed at that moment was small, so the risk is small. Everything on our shoot is absolutely real. The only thing in the case of testing "Uranus-9" for safety net was a person who could press the red button and remotely stop the robot.

But he never pressed the red button. There was no need.

Are robots so smooth?

Alexey Egorov: The biggest problem with robots is the speed of communication. Relatively speaking, you see with the help of a robot that you need to shoot. So far I have processed the information, while the signal has passed ... It is about fractions of a second, but it also matters. The decision in battle should be made instantly. The development of combat robotics goes in two directions. Under the robots create new programs that reduce the time of the signal. And as never before, the problem is: is it possible to transfer to the robot the right to make a decision on a shot, and therefore on shooting at a person. But this is a matter of law.

"Uranus-9" is a robot in the literal sense of the word. But there are robotic Tanks, the same "Armata": the crew in an isolated armored capsule, the tower is uninhabited, firing is controlled remotely.

I correctly understood the story about smart mines: will they soon be able to distinguish a soldier from a civilian?

Alexey Egorov: So it is. For many years, no one in the world could understand how even our relatively old mines, such as “The Hunt”, are arranged. They were used in Afghanistan. Mina distinguished animals from humans: the sheep will pass and will not explode, but man will not pass. Only after the collapse of the USSR such mines were found in the warehouses of one of the Baltic republics. They found out: the main secret in the seismic sensor.

More advanced ones, such as the Medallion, have now been developed. She is even smarter. Indeed, the next generation of our mines will teach us to distinguish a soldier from a civilian. How is this possible? Mines are sensitive to metal. But not only that. There are more secrets that we cannot talk about.

Scene: here you are in a white shirt "riding" on a self-propelled gun "Coalition". At the speed of leading the report, holding the barrel. Not risky?

Alexey Egorov: By the way, it goes very smoothly. Risk? We train first, the crew chooses the optimum speed. By the way, much more difficult for my operator. I hold onto the trunk with my hands, but he has a camera in his hands. Sometimes the operator even bind. And always choose places where there are three points of support: for the legs and for the body strut.

As for the cameras: you often place them in the firing zone. Are bosses understanding losses?

Alexey Egorov: We have already started collecting broken GoPro. But many cameras survive, only the mount is damaged. As for the authorities, everyone understands that, by making a serious military program, you cannot risk people. And if you do not risk technology, then nothing can not be removed.

We, for example, when we made a film about flame throwers, we had a kopter hanging right above the point of impact. And there expensive equipment, once in 10 more expensive than the usual GoPro.

It happens that losses do not come from mines and shells, but from the fact that they fall into the zone of electronic warfare.

There was a case. Worked on a serious object, on which one, I will not say. Got all permissions. And for no reason at all, a kopter is off course. It flies normally and - once, it falls.

The equipment is good, the batteries are charged, the control is normal. And suddenly some kind of power changes everything. Whack - and at full speed in the ground.

In the submarine storyline, your drones also behaved very strangely.

Alexey Egorov: During the filming of "Vladimir Monomakh" we did not have our own kopter. We hired a team with great experience. The camera they had was not a GoPro, but a full-fledged "Mark" with an expensive lens. And now our kopter flies and in some place sags down half a meter, then the flight is restored. Devilry! Smooth flight - failure - smooth flight - again failure. Panorama can not be removed, we write only fragments of seconds on 5-7. In the end, the guys, without my consent, took and started the kopter at full speed along this trajectory. Just to understand what's going on. And ... the copter disappeared.

Imagine the situation: Severodvinsk, five in the morning, the footage is not known where. They lifted all services on their ears, found it. The copter crashed, but the camera survived.

How do you understand the sailors of "Donald Cook"! (destroyer fleet The United States, which all electronics refused when approaching the Russian Su-24 bomber. - Ed.). And the question begs: due to what are we creating something of this sort, but it does not work out for others? Let's say the most accurate RPG-29 is the Vampire, which is called the "sniper grenade launcher." We can do these, they are not. Nicely. But still, why?

Alexey Egorov: Designers told me more than once: they do that weaponwhich they ordered. The military set the requirements, which are always outside the existing level. Two or three steps ahead.

And further. Excellent systems are always obtained when an enterprise does not boast of its achievements, and within the framework of the military-industrial complex unites efforts with its colleagues. For example, in Soviet times, the priority for resources and funding was from the nuclear industry. And when the nuclear scientists developed a projectile for the Chrysanthemum complex, it turned out to be unique.

Or take the original solution - ignition of charge when firing ACS "Coalition" occurs due to microwave radiation. That is, the powder is set on fire simultaneously, as in a microwave, which dramatically increases the efficiency of the shot. But how it is a secret.

Are the viewers unhappy?

Alexei Egorov: We are reproached: you do not let people open up, my long question sounds in the air, in response: "yes", "no" and "does not matter." It seems that our general designers and military representatives are tongue-tied. This is not true. Simply speaking into the camera, they think all the time: they wouldn’t have missed the point. By the way (laughs), I caught myself thinking that now I am behaving just like them.

Coalition, Su-34 and T-50 are high-tech products. And take a mortar. He created more than a century ago. Nothing new in the design appeared: a pipe, a plate and a sight. During the Great Patriotic War a ingeniously simple mechanism for re-loading was added. And that's it! But we created a silent mortar, but no one in the world could.

Alexey Egorov: We have an organization whose name it was not possible to say out loud until recently, - the Research Institute of Applied Chemistry. We are very strong in developing chemical formulations. You could say trendsetters. For example, there is nothing in the world like our heavy flamethrower system "Sunpipek".

When they were filming a story about flamethrowers, we were not allowed into the workshop where thermobaric ammunition is produced. This is a rare case, usually allowed. But if the machine gets into the frame, then the experts will understand what we are doing and in which direction we are moving.

I will not answer directly the question about the silent mortar. Just to say that there is a feeling that this is a spike of chemists and manufacturers of mortar systems. The secret is not so much in the mortar, as in his shot.

As for world records, they are stories the creation of our military equipment a huge amount. For example, everyone knows what Kevlar is. Meanwhile, we had a superior Kevlar aramid canvas. But who heard about him?

We were the first to create an all-metal submarine. Launched in 1834 year. Designer - Adjutant General Karl Schilder. Since it made the world's first missile launch from a submerged position.

Let's do a good deed: the military is annoyed by myths and bloopers about the army and about weapons. Create a list of "bloopers"? For example, do not say "at the helm of a fighter." The pilot's right hand is on the aircraft control stick, the left hand is on the thrusts (engine control levers). Steering wheel in the cockpit no.

There are no "platoon commanders." Platoon, company, regiment, brigade, division commanded by the commander. Army and above - commander.

Alexey Egorov: There is no bullet "with an offset center of gravity." Although many believe in this myth. If such a bullet were, then it would fly anywhere, but not at the target.

There is no captain on a warship or submarine, there is a commander ...

But I can say that people are no longer annoyed by this. They shot the speedboat "Raptor". He approached the commander, warned that I did not know the maritime laws and terms. He says: "Yes, call it what you want. You will call the hatch a lid - not scary." That's when you did not understand - bad. If, say, the general designer carefully prepared for the visit of the film crew, and you came to him unprepared, it is annoying. But if people see that you are immersed in the topic, then the little things are forgiven.

Significantly: I was at a factory near Krasnoyarsk, which produces 90 percentages of our satellites. When they said goodbye, they told us: more than a hundred journalists came here. But you are the first who shot at our factory for so long: three days.

And they have so many interesting things ...

"Military acceptance" comes out weekly, it's like a non-stop conveyor. Plots enough?

Alexey Egorov: Yes, a very so powerful conveyor. But with the stories we are all very well. As I was told in Chelomey KB, there are much more secrets about which we will tell you (now or when the time will come) than you can imagine.