15 2016 June
29
Autumn 2015 Year Manufacturer weapons from Germany, the Schmeisser GmbH company has launched its new product - a 9-mm self-loading pistol SLP-9 with a double-action striker trigger and a polymer frame. This model is a full-size pistol, which is similar in design and layout to the Austrian Glock 17 and the American Smith & Wesson M&P. It is with the Austrian "Glock" that this pistol will compete in the European and world markets.


Schmeisser GmbH proudly bears the name of the famous gunsmith Hugo Schmeisser (Hugo Schmeisser), who is rightfully considered one of the most innovative weapon designers of the first half of the 20th century. Currently, the company is mainly engaged in the production of AR-15 semi-automatic rifles for hunting and sport shooting (the company is quite popular in Europe among athletes-shooters), as well as combat / police versions of M4 / M16 rifles. In this case, all the main components of the listed small arms are made directly in Germany according to the highest quality standards, with a guarantee of the early delivery of the ordered small arms and spare parts to them.

Schmeisser SLP-9 pistol allowed the company to enter the market of short-barreled weapons, representing a rather interesting product. First shown at the end of last year at an exhibition in the United States, in 2016, it was officially introduced for the international market at the gun shows SHOT Show and IWA. The SLP-9 pistol was the first self-loading short-barreled weapon of this German company. The gun is designed primarily for personal self-defense, open and hidden carrying, can be used as a service weapon and for target and recreational shooting, as well as for conducting IDPA competitions. 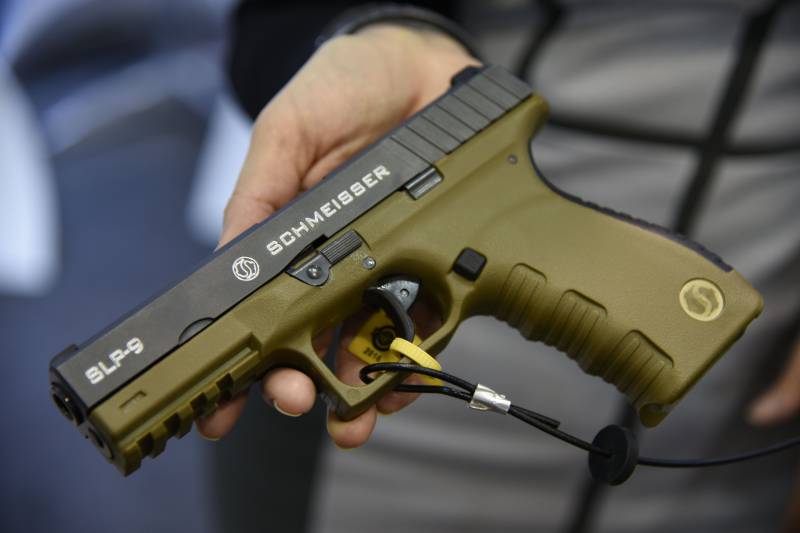 In fairness, it is worth noting that the Schmeisser SLP-9 is not a completely new product on the international market for small arms: several years ago, exactly the same gun was already released under the name TM-9. Then its manufacturer was engaged in a small company TARA Perfection DOO, which is located in Montenegro. This model has already been able to achieve some fame on the world market for civilian and military / police small arms, but under the brand name Schmeisser you can always count on a faster growth in sales. At the same time, the TARA group of companies has many years of experience in the field of high-tech products for the defense and aerospace industries, while possessing the most modern production technologies. Being in the territory of Montenegro, the company is able to provide a high level of product quality at a low cost compared to most of its direct competitors.

The TM-9 pistol was first shown in Paris back in 2013. At the same time, this model is a good sample of modern firearms, which successfully combines the popular cartridge caliber 9x19 mm, a relatively small mass, good ergonomics and a decent store capacity. In addition, trying to convince the consumer of the maximum reliability of its product, TARA provided its customers with a guarantee for the main parts of the gun on the 50 thousand shots.

Automatic pistol built on the use of recoil in the short course of the barrel. Locking is carried out using the declining breech of the pistol, which enters with its rectangular protrusion located directly above the chamber, into the window for ejection of the shotgun shells. In front of the frame of the Schmeisser SLP-9 self-loading pistol there is a Picatinny rail that allows you to attach a laser designator, tactical flashlight or other tactical accessories to the pistol. To protect the gun from mechanical damage and corrosion, the surface of the steel parts was treated with a special coating called Tenifer. 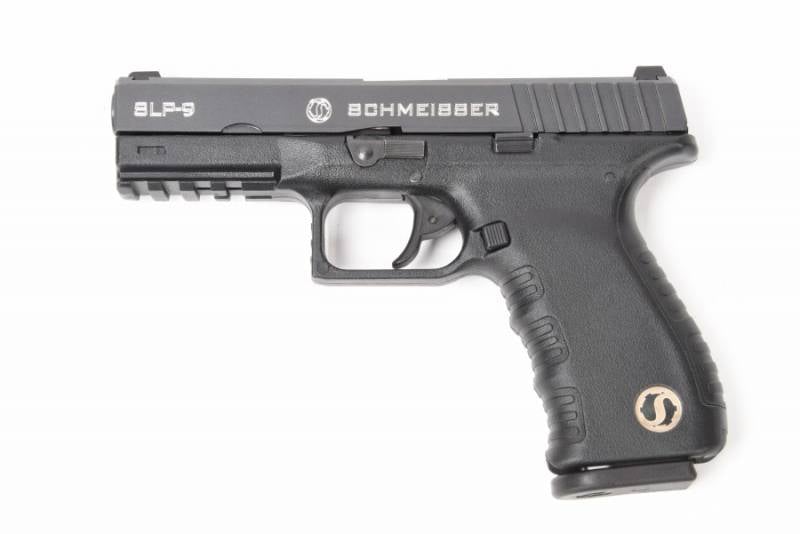 The Schmeisser SLP-9 self-loading pistol is equipped with a milled shutter housing made of stainless steel with black coating, the reinforced polymer frame of the pistol is available to buyers in black, grayish-green olive and sandy versions. In addition, there are 3 interchangeable lining for the back of the pistol grip, butt plates of various sizes are used to adapt the gun to the hand of the owner. On the sighting device, there are three white dots designed to improve aiming in low light conditions. The standard front sight and rear sight, which are secured in dovetail slots, can be replaced quite easily with any other sighting devices, for example, with fiber-optic or tritium inserts.

Like the Austrian model Glock 17, the Schmeisser SLP-9 pistol holds 17 ammunition caliber 9x19 mm. It uses a two-row box store, while the store is completely steel, with the exception of the heel (made of polymeric materials). Schmeisser SLP-9 pistol magazine latch was designed as a button. In contrast to the lever latch, which is typical of modern German-made pistols, it is made two-sided, while the lever for disassembling the weapon and the bolt lag lever were located on the left side of the frame. Such a solution greatly simplifies the weapon, making the process of its incomplete disassembly extremely simple in comparison with other shock gun pistols. The design of the store uses stainless steel, while the store body is covered with a special anti-friction coating, which is designed to provide higher speed, reliability and convenience of reloading the store in a variety of situations.

The SLP-9 pistol uses a hammer-type firing mechanism. The length of the barrel of the gun is 113 mm, it has six right-hand polygonal grooves. The axis of the bore is extremely low - 25 mm (or 0,98 inches), which provides the arrow a soft recoil and a small tossed muzzle of the barrel when fired. A distinctive feature of the Schmeisser SLP-9 pistol is its unusually easy double action trigger, which the manufacturer designates as DARE (Double Action Rapid Engagement). So the first pistol shot requires an 3,5 kg effort on the trigger and the 10 mm hook stroke, but then it is triggered already during the 3 mm course, allowing the shooter to make quick presses after the first shot. The DARE trigger mechanism also allows, after a misfire, not to send a new cartridge into the chamber, but simply re-press the trigger. At the same time, most schools of military firing teach that in case of a misfire, it is imperative to extract the defective cartridge and send a new one, not trying to try your luck and experiment. 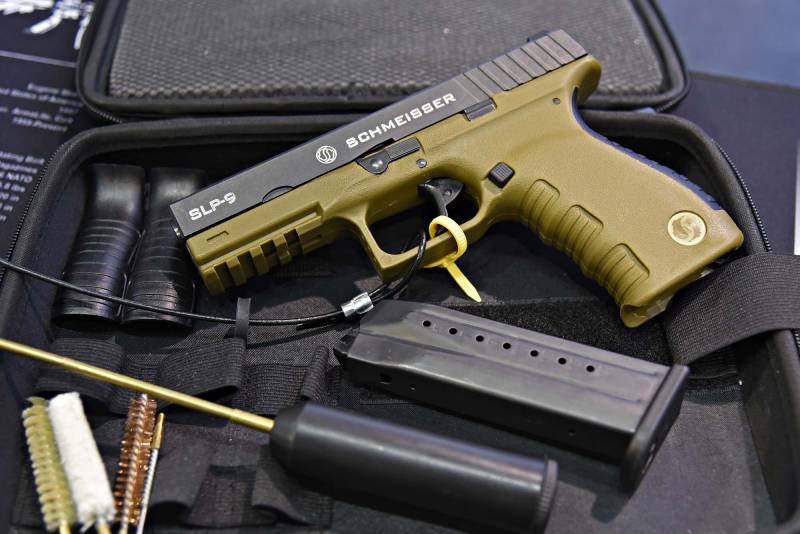 The Schmeisser SLP-9 pistol is equipped with an automatic firing pin guard, which makes a shot from it possible only when the shooter has fully squeezed the trigger. A wide and openly located ejector liner will always tell the gun owner about the presence of a cartridge in the chamber. It is worth noting that the SLP-9 self-loading pistol is quite compact in size. Its length is 187 mm, the width of the entire 30 mm, and the weapon with a fully equipped magazine on 17 cartridges weighs 950 grams (33,5 ounces).

But if we leave out the technical features of the model and its compactness, the price of the novelty comes out on top. There is no information on the availability of the model and current prices in the Old World, but the price recommended for the SHOT Show 2016 exhibition for the USA ranges from 499 to 550 dollars, and in Canada to 750 dollars. This pricing makes the Schmeisser SLP-9 a very good alternative to Glock pistols, both in terms of sales price and manufacturing quality. 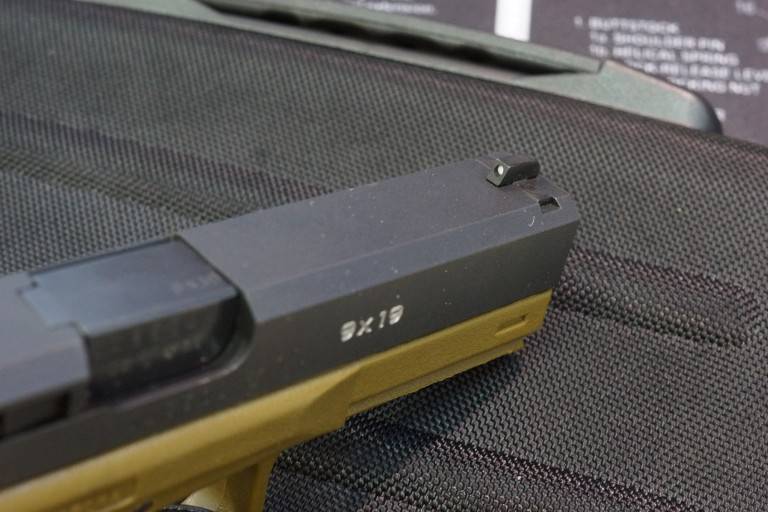 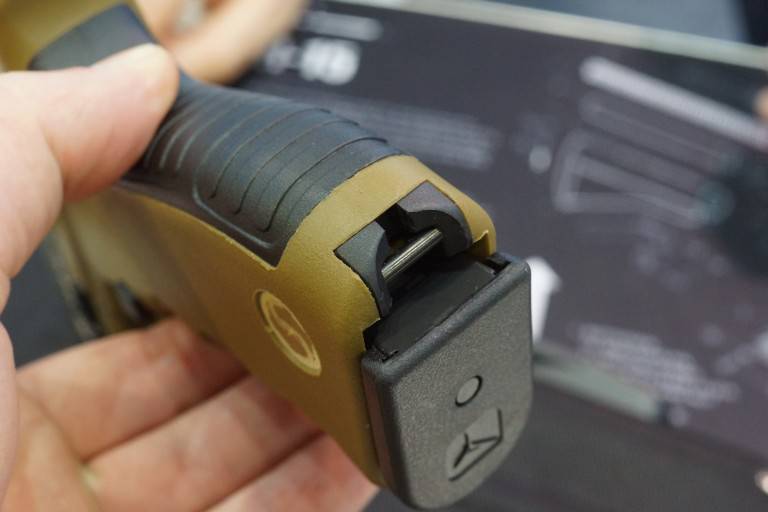 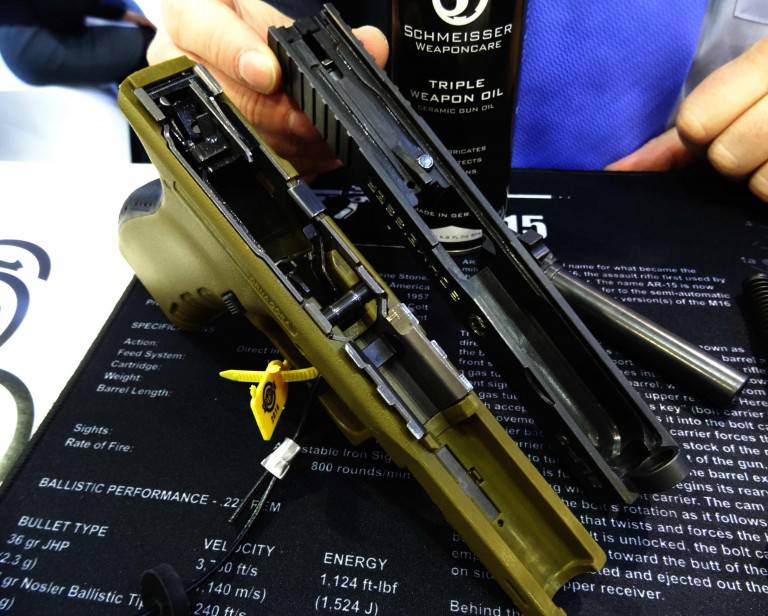 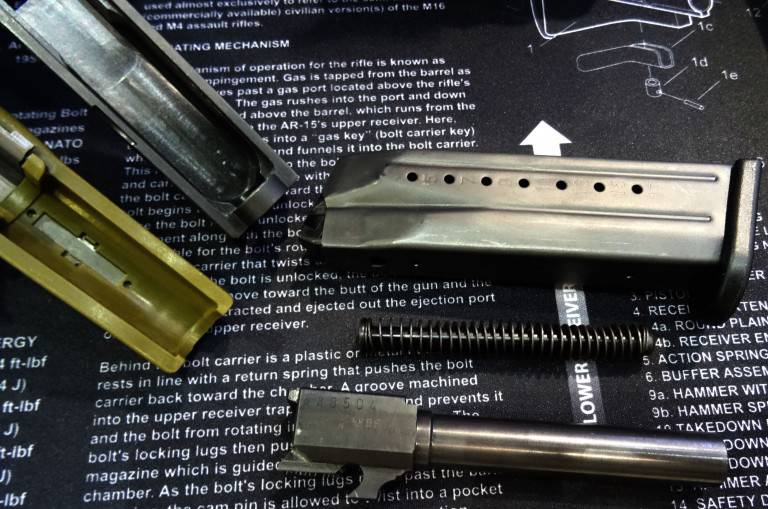