12 June - Day of Russia. And a holiday, and a reason to reflect

12 2016 June
183
Today our country celebrates one of the public holidays - Day of Russia. Previously, this holiday was called the Independence Day of Russia, having received its status due to the adoption of the Declaration of State Sovereignty of the USSR. This document, which is still provoking heated debates, was adopted on 12 on June 1990 by the Congress of People's Deputies of the RSFSR elected by the vote of 4 in March of the same year (a total of 1068 people).

On the subject of the declaration adopted at the Congress, and on the election of the people's deputies of the Congress itself, it is worth saying a few words separately. And these words are about the legitimacy of the Congress and the legal force of the decisions made in its course. The fact is that 12-15 in March 1990 was held by an extraordinary congress of people's deputies of the USSR, which not only managed to create the post of President of the Country of Soviets specifically for Mikhail Gorbachev, but also to abolish one of the fundamental constitutional articles of the Soviet Union. It's about the article, which assigned the CPSU a leading role in the public and state sectors.
Elected in March 1990, the composition of the Congress of People's Deputies of the RSFSR for 86% consisted of members of the Communist Party of the Soviet Union (920 seats). And during the vote on the so-called Declaration of Independence of Russia 12 June 1990, 907 people's deputies said this declaration "yes." Only 13 people voted against the declaration. As you might guess, the absolute majority of those who voted at the time for the “independence of the RSFSR” were represented by the CPSU. However, the abolished article of the Constitution of the USSR, which existed at that time, the leading role of the Communist Party, as already noted, was abolished. In this regard, the question arises: did it mean that the decision of the majority of people's deputies to adopt the declaration, and all the other decisions of the RSFSR people's deputies congress, compiled on 86% of the members of the CPSU that had party membership, had at least some legal basis? The question about which spears break to this day ...

However, it is worth moving from legal subtleties to subtleties, so to speak, humanitarian. Until now, the overwhelming majority of the population of Russia cannot clearly answer the question of from whom, after all, did the RSFSR then become “independent”? And to answer this is really extremely difficult. If we approach the consideration of the situation from the everyday point of view, then the deputies in Moscow with authority would act like a collective careless mother who abandons her children. Like, everything ... - I will declare independence from all of you and I will live in clover. Perhaps the comparison of Russia with the mother, and of the Union republics with children, is somewhat incorrect and offends someone from the inhabitants of the Union republics, but if guided solely economically, the comparison still has the right to life.

If you get acquainted with the text of the Declaration of Sovereignty itself, the decision of the deputies looks altogether blasphemous. Judge for yourself - from the text of the document, which actually continued the beginning of the collapse of a huge state and led to dire consequences for tens of millions of people:

The First Congress of People's Deputies of the RSFSR, Conscious historical responsibility (and where is this responsibility? - author's comment) for the fate of Russia, testifying to respect for the sovereign rights of all the nations that are members of the Union of Soviet Socialist Republics, expressing the will of the peoples of the RSFSR (was that the will of the peoples? Yes, well ... - author's comment ) solemnly proclaims the state sovereignty of the RSFSR throughout its territory and declares its determination to create a democratic rule of law within the renewed Union of the SSR. 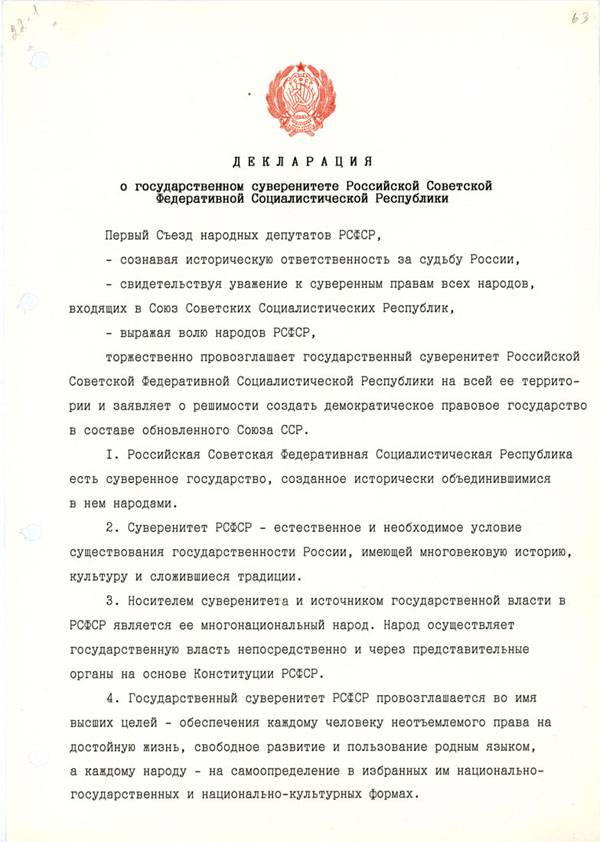 And until this point, the RSFSR did not possess sovereignty on its territory?

In fact, this document with the dubious legitimacy of the de facto cut off the millions of Russians living in the Union republics from their historical homeland - from Russia. Although the text refers to "historical responsibility" ... And who answered?

But then there was also a referendum on preserving the USSR, despite the results of which the citizens of the country were simply “shod”, without even bothering to explain why the results of the plebiscite were sent to garbage cans.

It was against this background that the new Russian sovereignty was taking shape. They declared independence from members of their own families, drew the boundaries between the houses, and then they applauded violently to all this under the friendly approval of Western "friends". If we are talking about sovereignty, then, excuse me, to whom should Russia with an 1000-year history have to prove the fact of its independence? Who in the world so far has not been able to realize that the sovereignty of Russia is determined not by a piece of paper written under dictation from an overseas “partner”, but by the whole history, spirit and courage of the people?

By the way, about 1000-year history. The holiday itself (the Day of Russia), it is quite patriotic (if again not to delve into the intricacies of jurisprudence of the end of 80's - the beginning of 90's), it seems to be unifying in nature. However, the very fact that Russia’s Day is 12 June is, as it were, implicitly obliged to carry with it the following plan: before 12 June 1990, Russia had no history? In other words, it was vital for people who implemented the Declaration with the Declaration at the time to push through the idea of ​​“sordiness” of Russia, and that the story “is being written from a pure democratic list”. For a complete victory over historically common sense, then it remained quite a bit - to announce the beginning of the calendar with 12 on June 1990, in order to combine it with the New Year, and in order to fully take root in the minds of the Russians ...

Thank God, not rooted, and, frankly, it is quite possible to understand those people who see in 12 June is not the day of the celebration of Russian sovereignty, but a day of dependence on those ideas that fed us in 90. It is quite possible to understand those who offer to transfer the Day of Russia to 18 in March (reunion with the Crimea) or on the day of the Baptism of Russia, in order (in the latter case) to emphasize the historical foundations of Russia and Russian society. 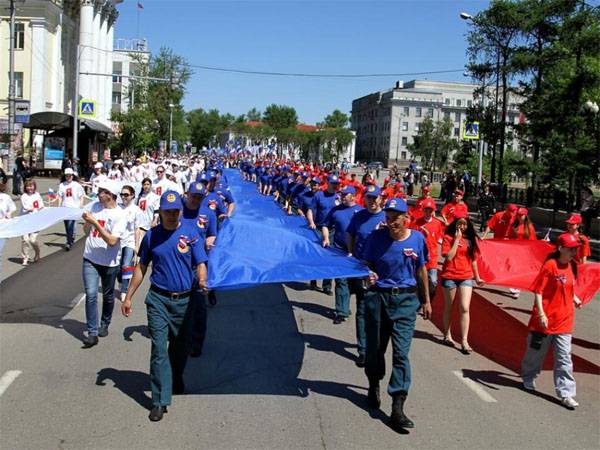 On the other hand, the holidays carry something adolescent-maidan, and therefore leave 12 June on the calendar just as Russia Day is at least because this date will always remind you of the error in millions of mutilated destinies made in 1990, and that it’s impossible to repeat such a mistake by Russia under any circumstances.