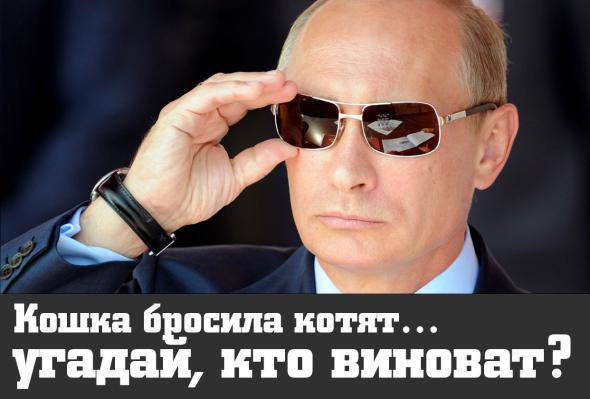 Four large grocery supermarket chains in Lithuania recently suffered a boycott that lasted several days. The cause of steel prices for cauliflower. An angry buyer wrote on Facebook that for a head of cauliflower 3,49 euros are shamefully demanded, and social networks are filled with outraged posts in which local prices are compared with prices in Poland and Britain. Lithuanians had to pay three times more.

One of the affected retailers, Maxima, panicked and said that Russia was behind the boycott. Of course, no one took this attack seriously, but it should be noted that shifting blame to the Kremlin in our region is a widespread phenomenon.

The same thing happened in Sweden a couple of weeks ago when the collapse of the internal infrastructure occurred. The so-called expert on terrorism from the National Defense Academy did not rule out that the problems arose due to the fault of some external force, "probably Russia".

“A security expert” said on the pages of Göteborgs-Posten that guns are needed on the island of Gotland, but they will not be enough to repel the threat from a hostile neighbor. Headlines on the front pages of some newspapers almost shouted about the war.

Now it became clear that the accidents had nothing to do with any interconnected sabotage. Even military activist Dagens Nyheter, Mikael Holmstrom, could not find contact with Russian aircraft or submarines.

Today Russophobia reminds the situation a hundred years ago. Then they also demanded to increase defense spending and strengthen ties with a strong power (then it was Germany). The country was seized with immense suspicion because of wandering Russian carpenters. The headman of a village told in 1913 year how he carefully inspected the grinding equipment of four joiners, expecting to see stigmas from the workshops of the Russian army, but he did not find anything. At the same time, the chief of the Stockholm police invited several joiners to a restaurant in the hope that they would give out disguised officers to their manners.

Now, in 100 years, we will not deny that some sprays of Russian propaganda are reaching us. However, it does not lead to serious consequences. The Kremlin’s information attack does not affect our major publications, and social networks are also hardly at risk. The sites of Swedish right-wing extremists pose a much greater threat to the democratic social order.

As for the real manipulation of public opinion through the leading media, we go back a decade ago. Dagens Nyheter, whose editor-in-chief was then Hans Bergström (Hans Bergström), conducted the largest stories modern swedish press disinformation campaign commissioned by a foreign power. For several months, Per Almark (Per Ahlmark) tried to convince us that Iraq possesses nuclear weaponsand at the same time discredit UN inspectors led by Hans Blix (Hans Blix).

The Dagens Nyheter campaign in 2002-2003 by all criteria fits the definition of propaganda given in a special NATO magazine that publishes the actively discussed center of “strategic communications” in Riga - Stratcom.

The Russian propaganda war is described in the journal as follows: “it includes deception, irresponsibility, pure lies and the creation of an alternate reality”.

All this was present on the pages of Dagens Nyheter in 2002-2003, only the source was not Moscow, but Washington.

The transition of Russian propaganda to the offensive is often called the "hybrid war." By itself, this way of waging war is not news and not the invention of Russia. Including, therefore, the term raises many questions in international debates. Many Americans, including those in NATO publications, warn against the careless use of this expression, which has more emotions than meaning.

The most in-depth analytical study on the topic was recently conducted by the University of Helsinki with the participation of a number of invited experts. The conclusion reached after the completion of the first phase of the work is the following: “the concept of“ hybrid war ”is not applicable as an analytical tool for assessing the military potential or foreign targets of Russia. Consequently, this concept should not be used in the process of strategic decision making and defense planning. ”

It is indicated that the term confuses rather than explains, and therefore may lead to incorrect conclusions, including those that will play in favor of Russia.

So what is the Russian propaganda offensive, which even the Swedish government seems to fear? Many mention the channel RT, however, according to independent research, its role and scale are exaggerated. I myself regularly watch his programs (mainly on the Internet), as he often talks about what the BBC and CNN are silent about for various reasons. Of course, the information is often served with a noticeable bias in the Russian version of current political events. It is a bit like Fox News, albeit in a different key. If someone needs a balance, you can search for similar news on the counter propaganda website Radio Free Europe / Radio Liberty, which is funded by the United States.

If you need an alternative to the Russian version of the Ukrainian events, that is, the Kyiv Post with its nationalist interpretations. And the best way to read independent international blogs, such as Odessa talk or Ukraine update. There, voices are speculated about Russian manipulations and they openly talk about the dependence of the Ukrainian authorities on oligarchs and ultranationalists. Critical, but at the same time rich in shades, the discussion about modern Russia is conducted in the Sean's Russia blog. Baltic Times gives a fair, though hardly a completely objective picture of the situation in the Baltic. There you can also find the most revealing reports about the intellectual level of Stratcom activities in Riga.

By joining Stratcom, the Swedish government chose in many respects to assimilate the picture of the world, sometimes bearing the imprint of Baltic and Polish nationalism. The same applies to the Department of Civil Defense and Readiness, where posts in the "private" Twitter of one of the department heads happily show what is happening in the minds of the leadership.

It is still not entirely clear what exactly Sweden will do in Riga. In a slightly strangely worded “declaration of intent”, there was a “heartfelt wish” to find the head of the technical and scientific development department. But there is no such department in terms of organization on the Stratcom website. Of course, this can be attributed to the fact that the site is rarely updated. But, in my opinion, the case smells of electronic intelligence.

Now that the beautiful alliance of Social Democrats and Greens has involved Sweden in this NATO-related organization, it remains to be hoped that our representatives will keep what they call a hybrid war within reasonable limits. Perhaps the Swedish specialists will have the opportunity to assess the scientific level of the center’s activities and lower the propaganda tone of the publications. Otherwise, Sweden will have to shoulder the heavy burden of collective responsibility for the organization, which is almost entirely based on the old logic of the Cold War.