Russia under the gun of “unofficial” sanctions (The Financial Times, Great Britain) 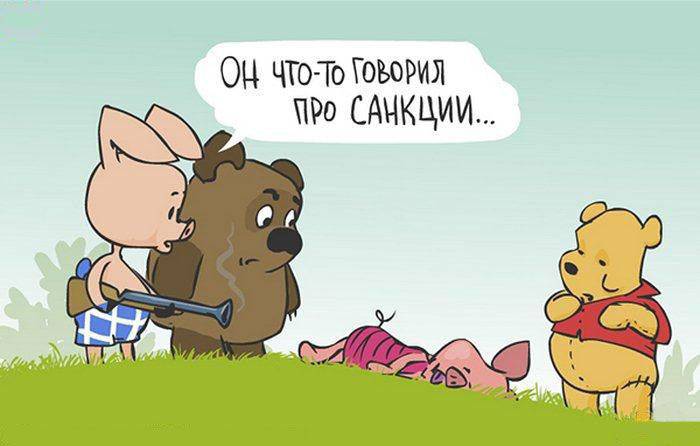 Recently, Russia presented the world two completely different pictures. Moscow returned to the global capital market by issuing bonds in euros for the first time since 2013 (after a year, Russian leaders and enterprises were under the blow of Western sanctions due to military intervention in Ukraine).

At that very moment, an angry pensioner caught Prime Minister Dmitry Medvedev off guard in front of camera lenses in the annexed Crimea. He complained to the Minister about the lack of indexation of pensions. “There is simply no money,” Medvedev replied. - Finding the money - will be indexed. You hold on, health to you, good mood. " The incident has generated a wave of contemptuous reviews in social networks.

In fact, the situation with the Russian budget is not as deplorable as Medvedev said. This year its deficit will be 4%, for the first time since 2010. However, by getting 1,75 a billion dollars to issue bonds, Moscow has demonstrated that it is still able to attract loans. Thus, it is likely that she will be able to find the remaining 3 billion, which are needed to equalize the budget for this year. Russian bonds are not affected by sanctions, and there is no official ban on raising the debt ceiling either. But if the purpose of the bond issue was to show that the sanctions are not so terrible, and that the interest of investors will calm all fears, the idea clearly failed. The operation showed that “unofficial” (that is, imposed by governments behind the scenes) prevent enterprises, banks and financial institutions from restarting business with Russia.

Moscow claims that foreign investors (and, for the most part in the UK) purchased bonds of more than a billion dollars. However, many large funds refused to participate, and very few people openly admit that they bought Moscow securities. The source of a significant part of the funds that came from the UK can be Russian capital, which is walking between London and Moscow. The problem lies not in the absence of demand, but in the concerns of investors: it will not be easy for them to sell Russian bonds in the secondary market. The prospectus notes that there is no guarantee that they will be accepted by the Euroclear and Clearstream systems used by many investment organizations. This means that at the moment they can be processed only with the help of the Russian system.

Informal sanctions make themselves known. In February, the Russian Ministry of Finance contacted 25 US, European and Chinese banks to organize the issuance of bonds. Washington privately contacted American banks and asked them to refuse to participate. Otherwise, it could undermine the effectiveness of the sanctions and give Moscow the opportunity to use the funds for the needs of its banks and enterprises that cannot receive funding in the West. The EU sent a similar warning to European banks. In the end, the only organizer of the issue was the state-owned VTB Capital. Moscow failed to attract even Chinese banks: this suggests that Chinese financiers are more afraid of annoying Western regulators than missing out on business opportunities in Russia.

Finance Minister Anton Siluanov loudly criticized European and American banks, which go in the wake of the “telephone right” (Western journalists often use this expression to describe the Russian judicial system). He also noted that Moscow is in talks with Euroclear about bond servicing, and therefore the system “was subjected to unprecedented pressure” from governments. In the Euroclear situation is not yet commented. Be that as it may, its largest shareholders are banks, which can face very big problems if the depositary is accused of violating sanctions. As for competitors from Clearstream (owned by Deutsche Börse), in 2013, they had to pay Washington 152 a million dollars in fines for violating US sanctions against Iran during securities transactions in 2008. The rest of the market participants could not fail to note such an unequivocal warning for themselves.

Western enterprises, of course, want geopolitical tensions to subside, because they are tired of a bunch of official and unofficial restrictions. However, the head of the European Council, Donald Tusk, said last week about the high probability of extending European sanctions against Russia despite the disagreement of several states. This means that the sanctions will remain in force for at least six months and, despite the declared “point” and “surgical” nature, will cover Russia with a much wider restrictive cloud ...

Ctrl Enter
Noticed oshЫbku Highlight text and press. Ctrl + Enter
We are
An open letter to Putin - after the anti-Russian attacks of our media and politicians ("Neue Rheinische Zeitung", Germany)Honey and tar Dmitry Medvedev
Military Reviewin Yandex News
Military Reviewin Google News
48 comments
Information
Dear reader, to leave comments on the publication, you must sign in.