While the CIA and the Pentagon are arguing, Russia is attacking the US-supported rebels (The Daily Beast, USA) 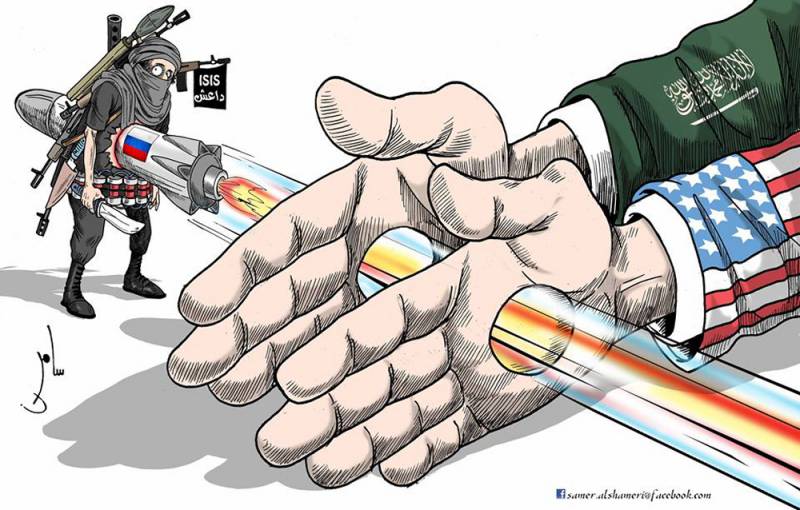 In Aleppo, the rebels, supported by the United States, found themselves in a difficult situation. The reaction of Washington was the tightening of the struggle - between the military and intelligence agencies of the United States

The US-backed opposition forces in the largest city of Syria are currently opposing a fierce attack led by the Russian military, and this raises serious concerns, since the rebels can be completely eliminated within a few weeks.

How did the Pentagon and the US intelligence agency react to this?

Arranged a fight among themselves.

Two officials of the US Department of Defense told the Daily Beast publication that their department did not want to support the rebels in Aleppo, because the latter, according to some reports, are closely linked to the Al-Qaida Syrian offshoot - the Jabhat al-Nusra group. The CIA, which supports these rebel groups, rejects this information, stating that the situational alliances created in the face of the Russian offensive are alliances based on military necessity, not on common ideologies.

“It is rather strange that officials of the Ministry of Defense echo Russian propaganda,” said one American official, who supports the intelligence agency’s point of view, in response to the Pentagon’s claims that the Syrian opposition and al-Nusra are one and the same.

But even if the rebel groups were in no way connected with the "Al-Nusra Front," there would still be a kind of strategic conflict with the US military tasks. According to Pentagon officials, the rebels in Aleppo are fighting against the regime of Bashar al-Assad, and the main task of the American military campaign in Syria is the destruction of the self-proclaimed "Islamic State."

“We do not play any role in Aleppo. The forces that we support ... are fighting against ISIS, ”explained one Ministry of Defense official to the Daily Beast.

The intelligence community, which supported the opposition forces in Aleppo, believes that ISIS cannot be defeated while Assad remains in power. According to them, this terrorist group thrives where there is no stability. And only local forces - such as those supported by the CIA - will be able to get rid of this threat.

“The opposition is trying to keep its position in the face of the most brutal offensive of the Syrian and Russian forces,” one intelligence agency official explained. - The defeat of Assad is a necessary condition for the final victory over ISIS. As long as an insolvent leader remains in Damascus, and as long as Syria remains an insolvent state, ISIL will have a place from which it can manage its operations. ”

"You can not cope with LIH, if the state has ceased to be capable," - said this American official.

These disputes, which broke out between the two US departments, are evidence of the growing contradictions in the US approach to helping the rebels, who have already shown their inconsistency.

The Department of Defense is currently helping some rebel groups fighting against ISIL in the north and east of Syria, and more than 250 American military advisers are moving with the troops to ISIL, the city of Rakka. This same militant group is attacking the city of Manbij, which was a major highway for transporting people, weapons and inventories from Turkey to Syria. Meanwhile, the CIA has supported some opposition groups in Aleppo, the largest city in Syria, where in the past few weeks, Syrian and Russian troops have launched a powerful offensive.

"The United States has two independent programs that do not support, and sometimes even contradict each other," said Jennifer Cafarella, an analyst at the Washington-based Institute for the Study of War, specializing in Syria.

In fact, American support for a particular group may vary depending on its location in Syria. For example, the Pentagon supports the Kurdish forces associated with the Kurdish Democratic Union party in eastern Syria, but it does not support the forces of the same party in the north of Aleppo. With the support of the Russians, the militants of this party in the north of Aleppo attacked the forces that the US is helping.

“In our country, departments should not argue with each other. The White House needs to decide what its approach to Assad and rebel groups should be. I think they have a clear approach to ISIS, ”said David Gartenstein-Ross, a senior fellow at the Washington-based Foundation for the Defense of Democracy, in an interview with the Daily Beast.

These differences within the Obama administration arose at a critical moment for the war in Syria. Aleppo may be under a multi-month siege in which the opposition and Russian-backed government troops will clash, causing many civilians to suffer and a new refugee stream. And this is the best scenario. In the worst case for opponents of the regime, Aleppo will fall under the control of the forces of Assad for several weeks, which is likely to ensure the survival of his regime. Meanwhile, the fall of Aleppo will not give any guarantees regarding the outcome of the war. In fact, it can spur Assad's opponents, such as Turkey and Saudi Arabia, to strengthen support for the opposition fighting on the front lines.

Meanwhile, Assad demonstrated his confidence in success earlier this week when, when addressing parliament, he declared that he would free Aleppo from foreign-backed "terrorists", and even added that Aleppo would eventually become a cemetery for Turkey.

“Our war on terrorism continues,” said Assad during his address to parliament, which was broadcast on state television. - As we freed Palmyra and many other cities before it, we will free every inch of Syria from their hands. Our only option is a victory, otherwise Syria will not survive. ”

Russia has repeatedly stated that its attacks are directed only at the positions of such terrorists as the “Front al-Nusra”, however, such statements are increasingly difficult to be taken seriously. Russia inflicted many blows on hospitals and positions of more moderate opposition.

On Wednesday, June 8, at least 15 people died as a result of two air strikes of government troops in Aleppo, as reported by the Syrian Human Rights Observatory, which keeps statistics on civilian casualties. One of these blows was reportedly inflicted on the hospital, and as a result, at least 10 people died. Representatives of this organization also reported that in one of the suburbs of Aleppo as a result of explosions of barrel bombs dropped from government helicopters, at least five people were killed, including two children.

According to the Institute for the Study of War, which tracks attacks in Syria, the number of places that came under attack by Russian troops has tripled over the past five days, from about 10 to 30. As the representatives of the institute explained, Russia is arranging a series of attacks along the opposition’s main supply route, Roads of Castello.

However, the Obama administration is not ready to provide new weapons to opposition groups or to increase the volume of aid, and officials of the administration and military department admit that it is very difficult to develop a strategy that would suit everyone.

“It is unclear whether there is such a strategy to help the opposition, in which the benefits would outweigh the costs. This is explained by the fact that al-Qaeda remains a very powerful force within the opposition. How can the opposition be strengthened without strengthening Al-Qaeda? ”Said Gartenstein-Ross.

It is worth noting that the coalition headed by the United States has no right to fight with the Syrian regime and its desire to break the will of the opposition. The US military mission is limited to strikes at positions of ISIS. In practice, this also causes a lot of problems. Currently, the United States and Russia are trying to avoid collisions between themselves, making it so that their air campaigns do not overlap. This allows Russia to some degree of influence on where the US will strike, and Assad’s supporters are unlikely to oversimplify the task of striking against government forces opposing the opposition.

Perhaps that is why, according to statistics from the Pentagon, a coalition led by the United States for several weeks did not strike in the Aleppo area.

Whatever the outcome of the attack on Aleppo, according to critics, the lack of a clear approach to the issue of supporting the rebels, reduces the ability of the United States to influence the settlement of the five-year Syrian conflict.

“Most likely, in the near future, these opposition groups will unite around radical groups that demonstrate higher efficiency,” said Kafarella.

Ctrl Enter
Noticed oshЫbku Highlight text and press. Ctrl + Enter
We are
Bashar al-Assad: In Syria, not the “revolution” that the enemies are talking about, but the revolution of the army and the people against terroristsSyria: Americans scare themselves, and Asma Asad buys chairs
Military Reviewin Yandex News
Military Reviewin Google News
33 comments
Ad