Donkey's jaw, as well as David and Goliath!

Interesting, isn't it? A man took a donkey's jaw and killed a thousand people. That is, it is obvious that everything is in God's hand. He wished, and Samson gained strength, he wanted, and he lost it! However, in this case the reference of the Bible has a slightly different meaning, namely, the source study. The fact is that many theological plots are reflected in the miniatures with which artists decorated medieval manuscripts. At the same time, their main feature was that, having a finished biblical story, the medieval miniaturist took as a model ... the people around him! He simply did not know and could not see anywhere, but what people looked like at that distant time. The concept of historical development was deeply alien to him, so his miniatures were a kind of "photos of time" and, studying them, we can thus get to know how people of the Middle Ages looked at different times, and, of course, how they looked weapon and armor. Accordingly, both the shepherd David and the giant Goliath, miniature painters of different eras painted completely differently, which gives us reason to consider their images very valuable historical sources. 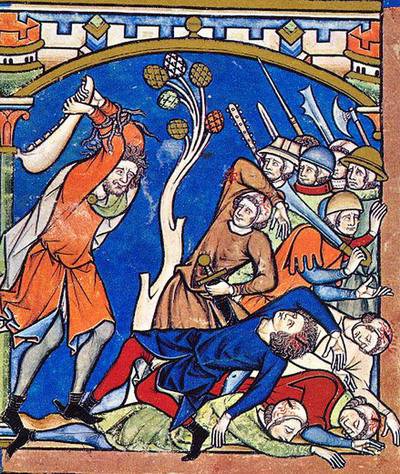 Samson beats his enemies with his ass mouth. A miniature from the famous “Bible of Macieus” or the “Crusader Bible” that belonged to Louis the Holy. Dated 1240 - 1250 Located in the Pierpont Morgan New York Library, two sheets at the National Library in Paris, one at the Getty Museum. Pay attention to how lovingly, one can say, and with skill the weapons of the people depicted on the miniature and their attire are written out. We see two felchens at once, although only about half a dozen of them were actually found.

But the modern reconstruction of this "sword", very similar ... yes, to the donkey's jaw! That's just to prove it can not be!

That is, it is enough for us to arrange medieval miniatures by years to clearly see how weapons and armor changed from year to year and century from a century. Accordingly, these changes are seen on effigious sculptures and are complemented by various other artifacts that have come down to our time. But we will talk more about the metal products of the Middle Ages, but now we are interested in “pictures”, all of which are united by one biblical storyline. On some - Samson with a donkey's jaw in his hands, on others - the shepherd David kills the giant Goliath. 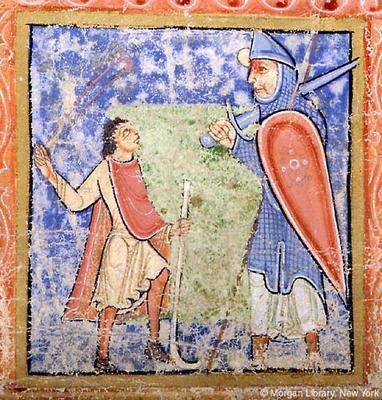 Well, this is the earliest image of David and Goliath of those that I managed to find. This is a miniature from Psalter from Canterbury, it dates from the 1155 - 1160 years, and is still in the same Morgan library. The shepherd is not interested in us, but Goliath simply asks for a drawing depicting a warrior of this time. He has a helmet with the tip bent forward, a long chainmail with a slit, put on an even longer shirt, and a shield in the shape of an inverted drop. 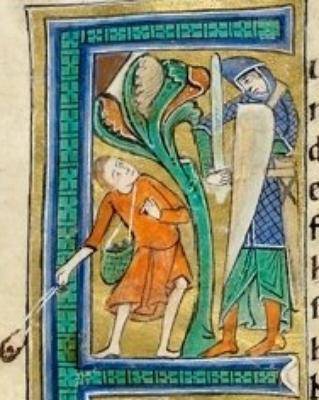 Next miniature from France, 1151 - 1175 The original is at the National Library of the Netherlands. And on this miniature we see all the same. Is that the mail has a front cut and looks a little shorter, and the shield has a belt - a tug. 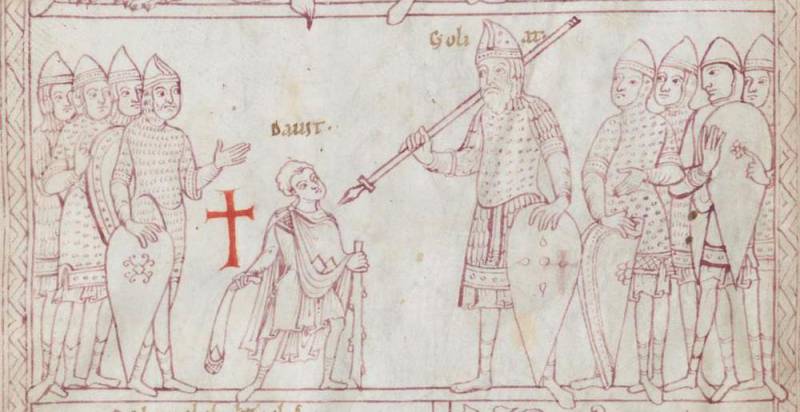 This miniature is from a manuscript from Germany, 1170 - 1180. And here it was clearly not without the influence of the Byzantine school. Look, on Goliath, in addition to chain mail, some scaled armor is clearly visible, quite characteristic of Byzantine icon painting and painting. But in general, weapons still remain international and uniform! 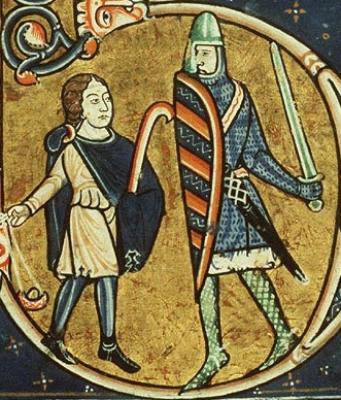 The capital letter O from the French manuscript 1180. The helmet acquired a noseband with an extension on the face, the shield became patterned, and the legs, too, finally received protection. There is obviously something quilted on them. 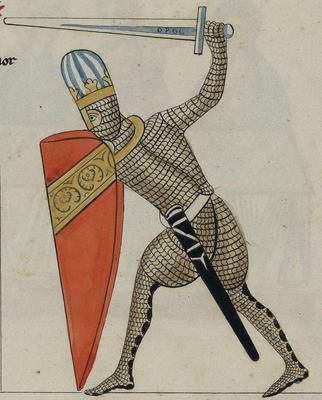 Now we have Goliath 1185 from France. As you can see, the helmet on his head is “swollen”, it is possible that it is painted or covered with striped fabric, the body is covered with chain mail from head to toe, but the chain mail armor on his legs is not in the form of stockings, but simple stripes tied on the legs from behind. Apparently, it was more economical.

But this is a kind of comic book of three pictures, one after another. Again, they are again David and Goliath, but now from Spain, the manuscript from Barcelona, ​​which dates from the period from 1200 - 1300 year. Library of San Lorenzo de Escorial. The first miniature shows how Saul dressed David in metal armor, but he did not like it. Not used to it. 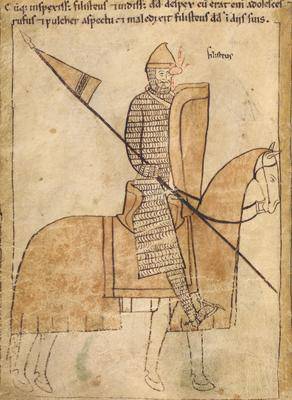 On the next miniature (it is in front of us) we see Goliath dressed as a typical knight. Helmet, shield, spear with a triangular pennon-pennon pennant, mail armor, and on his legs he has chain mail stockings. The element of humor: we see how the young David’s stone “flashed” into his forehead, so much so that only the spray flew! 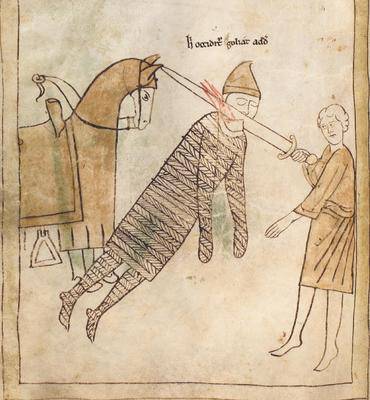 Well, here the ill-fated Goliath fell from his horse, and David chops off his head. The armor of Goliath, as you can see, is very simple and is not covered with anything on top, but his horse is depicted in a cowboy. 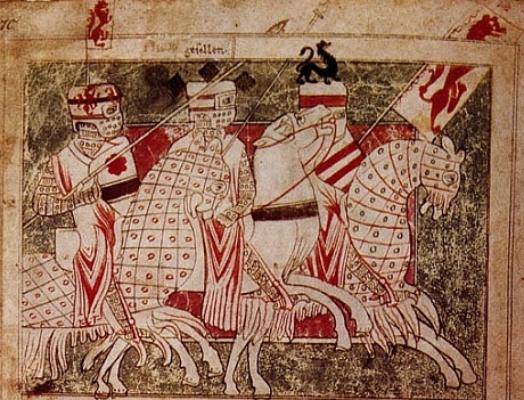 This miniature from Aeneid 1210 - 1220. Thuringia, the State Library of Berdin, there is no David and Goliath, but then the helmets as well as their stamp decorations are perfectly reproduced. On horses, they put on quilted blankets, and on shields we see the coats of arms of their owners.

Goliath from the Bible of Matsiyevsky disguised himself as a real dandy: on his head a painted helmet “Cap de Fer” (that is, an “iron hat”), on the body is a chainmail hauberk with a hood, on his knees are quilted knee pads, but his knee pads are from metal plates on strings, the truth is still the most simple, not anatomical shape. The shield in the form of "iron" has decreased in size, and surcoat appeared in the form of a long sleeveless shirt over the armor. Recall that this is 1240 - 1250's. 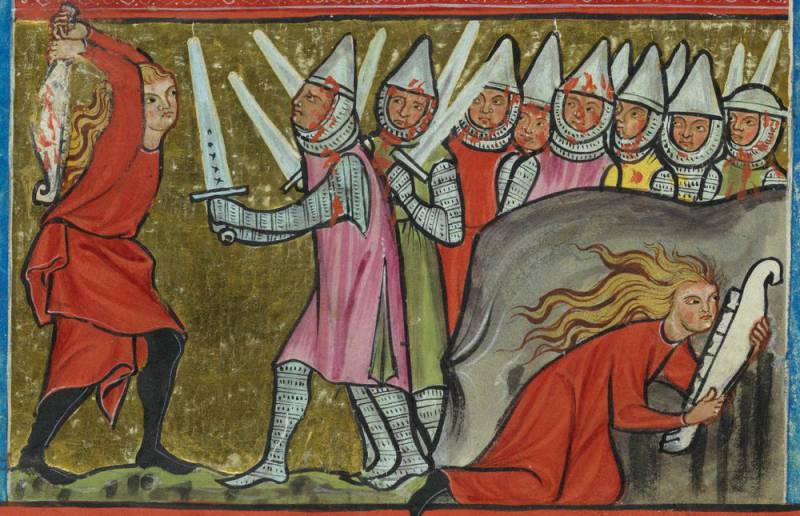 The Donkey's Jaw is a miniature of 1300 from Zurich, Switzerland, and the manuscript from which it was taken is in the library of the canton. We look attentively and note that the first warrior’s sword depicts crosses, obviously, the manufacturer’s “mark”, that all the warriors are already in surcoats, but for some they are girded, and for some not. And helmets ... helmets are tapered, that is, they continued to be worn along with everyone else. 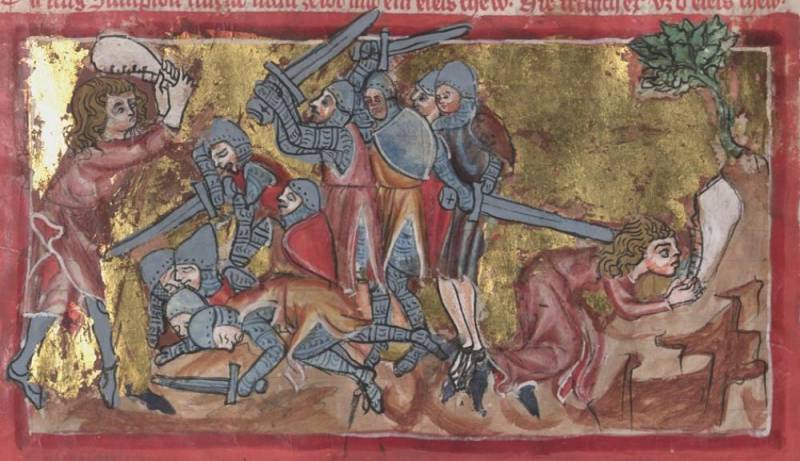 A miniature dated 1300 - 1350's. from Austria, Württemberg Library. Here we already see bascinetts helmets on the soldiers, even with holes along the edge. That is, at this time they were already quite widespread! 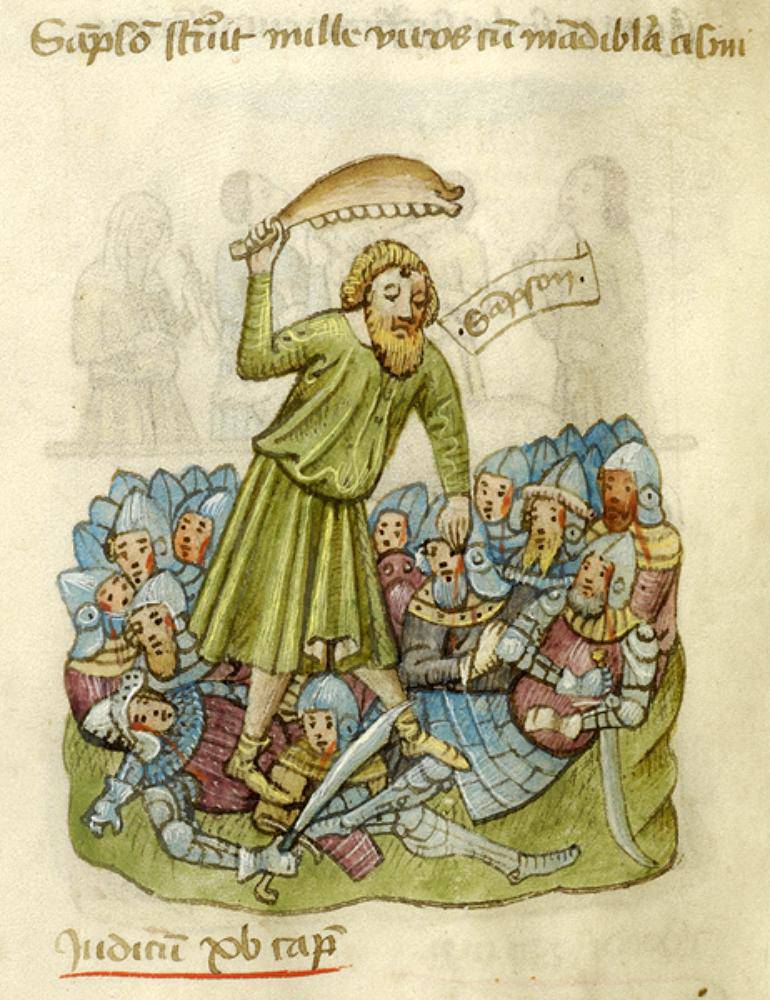 Finally, another picture of the assassination with the donkey's jaw: 1450 year, a manuscript from Belgium, is in the library of Morgan. On it, we see infantrymen in lamellar armor, brigandines and fechchens in their hands. That is all the same, as we are told, and other sources, and, in particular, the same effigii. 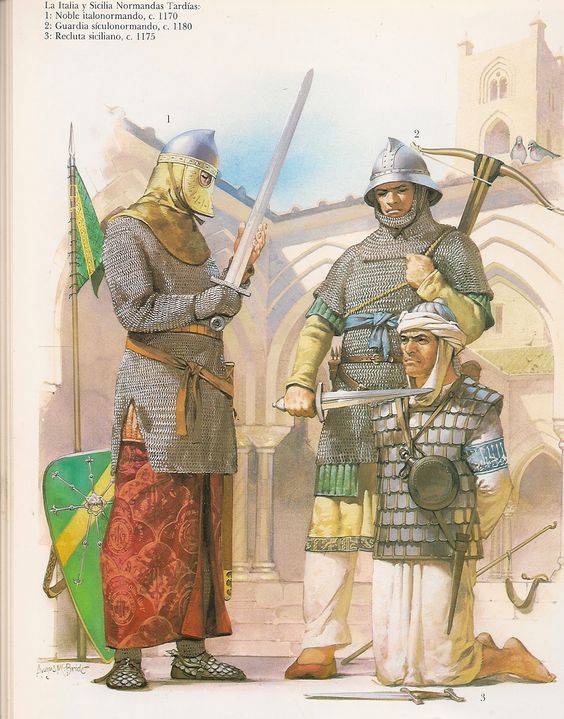 Well, now compare the miniatures presented here with the works of contemporary artists, well, let's say, the drawing of the same Angus McBride. On it we see the 1170 warriors - 1180's. Obviously, when working on it, he used not one, but many different miniatures, including relying on those that we could see here. That is, the reconstruction carried out by him was worked out very carefully. 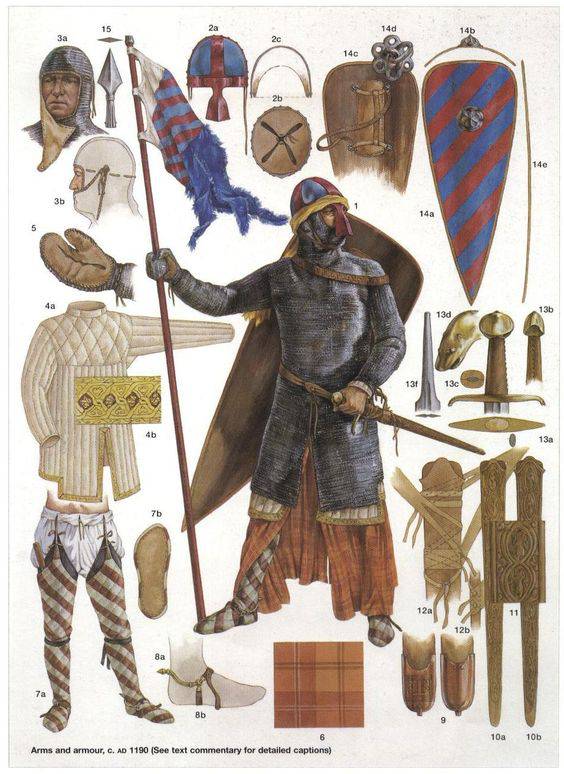 The pattern on which we see the knight 1190 of the year is worked out even more carefully, here we see everything in detail, right down to the pattern on the fabric. The sword depicted in the figure was once described by E. Oakshott, and his photo was in all his books, including in black and white. It should be noted that this is exactly what the knights who participated in the victorious battle of Montjisar and the tragic battle of Hattin could look like.

So modern illustrators, depicting warriors of the middle ages, have an excellent base for creating their works, and almost every detail of the weapons of one or another armor can be attributed both on the basis of real finds and medieval miniatures, of which there are many thousands today. (!), with only the smallest part of them digitized and available for viewing on the Web!