15 2016 June
55
China conducted a test launch of the Dongfeng 41 (DF-41) ICBM with a split head for individual targeting. The US Department of Defense reported on April 19 about the fixation by space of the flight of two warheads. The three-stage Dunfeng-41 solid-fuel rocket has an estimated mass of up to 80 tons and is capable of carrying individual-guided combat units from 6 to 10 to ranges up to 15 thousand km. Accuracy of fire (KVO) 100-200 m. The mass of the head part - 1200 kg (can be equipped with a monoblock warhead 300 CT or six 200 kg warheads and 30 CT power). It is believed that the nuclear warheads for the new ICBM are a “transitional product” until more advanced - compact, lightweight and powerful - warheads are developed. The rocket provides for mine and mobile basing - with autonomous launchers modeled on the Russian complexes "Topol" and "Yars", as well as on railway platforms.

The creation of the DF-41 was conducted intermittently from 1986, the first flight tests began in the 2012 year. The first throwing test with shooting from the transport-launch container DF-41 in the railway-based variant was carried out on December 5 of the year 2015. The product is in the final stages of development, official statements about its adoption by the PLA have not been received yet.

Iran conducted an unannounced launch of the latest carrier rocket, which, according to the Pentagon, hides the test of an intercontinental ballistic missile.

Based on telemetric tracking data, US intelligence agencies believe that the launch of the Simorgh space launch vehicle, carried out on April 19, was partly successful because it did not go into orbit. Since the beginning of the year, Iran has already conducted a series of tests of ballistic missiles and announced its intention to continue to develop its missile program.

In the United States at the end of March at the White Sands (White Sands Missile Range) test site in New Mexico, they conducted test launches of anti-aircraft missiles from Stinger MANPADS with a new Multi-Launcher. 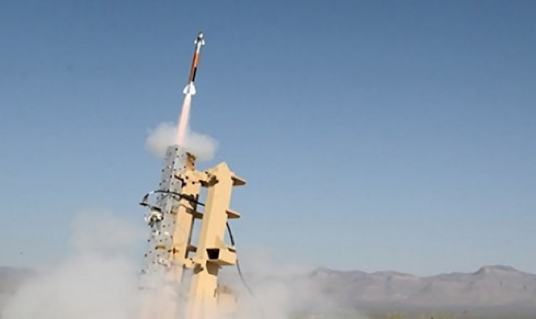 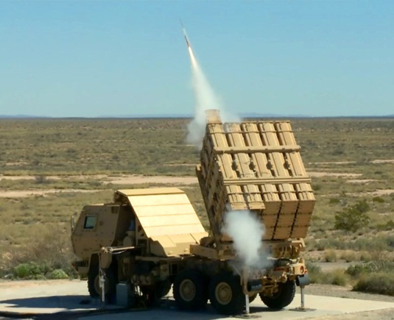 MNTK is a rocket 61 cm long, 3,8 cm in diameter and weighing about 2,3 kg, designed to intercept and destroy enemy low-flying targets, such as tactical missiles, artillery and mortar shells, at a distance from 3 to 4 km. It is equipped with a semi-active guidance system that directs it to a target illuminated by ground-based radar.

The Indian Air Force 11 of April conducted successful tests of a home-to-air missile designed for the Akash air defense missile system. The missile launched from a test complex at the Chadirpur test site (Orissa) hit the Banshee drone (Banshee), also created by the Defense Research and Development Organization (DRDO) unit of the Indian Defense Ministry. 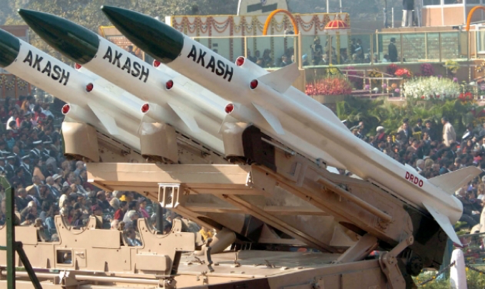 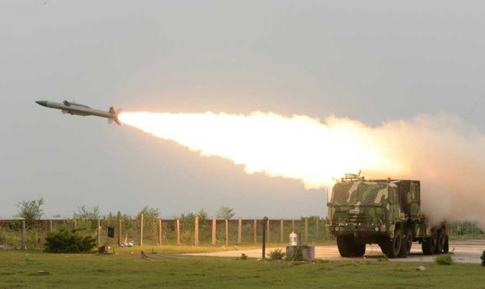 It can reach speeds in the 2,8-3,5 Mach, is equipped with a 60 kg warhead and can hit air targets, including combat aircraft, cruise missiles, air-to-ground missiles, at a distance of up to 25 km. The “Akash” air defense system (Akash) was adopted by the Air Force and the Air Force of India in 2015.
The US Air Force Command, when developing the next generation of combat aircraft, decided to abandon both the very concept of "fighter" and the numbering of generations. In the future, a promising aircraft will be characterized as a "family of systems", which should perform a wide range of tasks, including striking ground targets, gaining air superiority, countering satellites and electronic warfare. The list of requirements for the new device will be formed after analyzing the level of development of modern armory developments and their impact on the ways of conducting future hostilities. 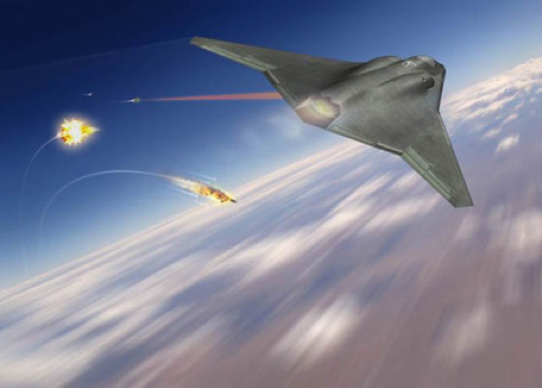 It is believed that the development of a new "family of systems" will take from 20 to 30 years. A new device will not be created by a single project. Instead, it is planned to conclude contracts with leading manufacturers of weapons and military equipment for the development of independent technologies, which can then be combined and combined with each other. All these technologies should make it possible to participate in long-range combat operations, deliver a large number of ammunition to the desired point and launch them far beyond the limits of the enemy air defense systems. As part of the new concept, the US is already developing a promising strategic B-21 bomber and “flying arsenals”. It is assumed that these aircraft will be able to perform various tasks both individually and jointly, effectively complementing each other's capabilities. It is also planned to include carriers of a qualitatively new weaponry, including energy weapons and hypersonic missiles, into the "family of systems".

The United States Air Force placed an order with Northrop Grumman for the production of a Large Aircraft Infrared Counter Measures for Military Aircraft (LAIRCM). 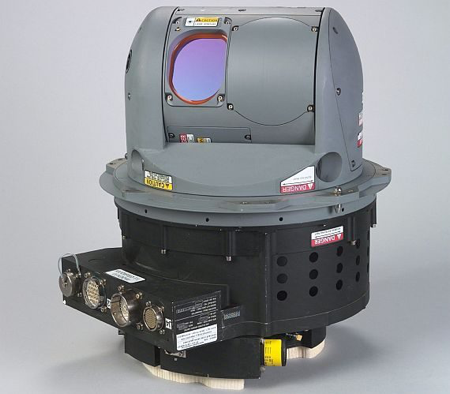 The system should automatically detect missile launches, determine the degree of their threat to the aircraft, accompany and, if necessary, destroy the approaching target using a laser beam. It is planned that it will be installed on all large-sized aircraft of the US Air Force during their modernization.

The Portuguese company TEKEVER Group is launching a new version of the AR3 NET RAY UAV, which has increased engine power by 33%, an extended payload range, including a radar of the sea surface survey.

The device is designed to perform several types of marine and terrestrial tasks, including reconnaissance, observation, target designation, environmental monitoring, communications. With a length of 140 cm, a wingspan of 320 cm and a weight of 14 kg, it can fly with a range of up to 120 km and a duration of about 10 hours. The launch of the UAV is carried out from a catapult placed on various platforms from small vessels to large ships. 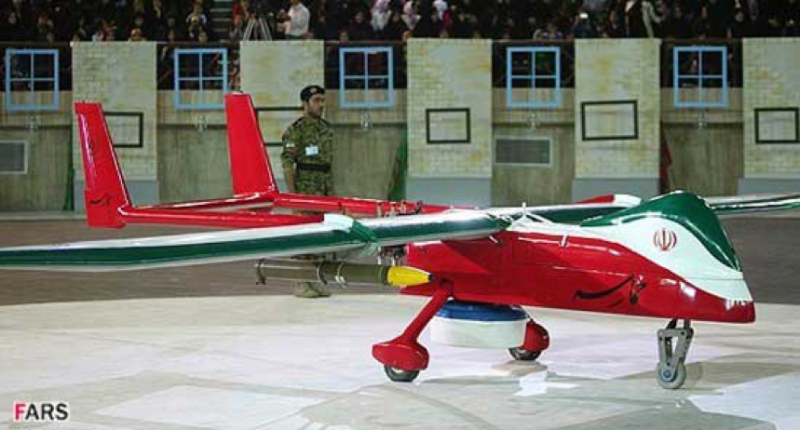 The device solved complex tasks together with other Mohajir (UAH), Shahid (Shahed), Ababil (Ababil) UAVs belonging to the Islamic Revolutionary Guard Corps during the Payambar-e Azam.

The US Navy research laboratory is developing single-use micro UAVs (Close-in Covert Autonomous Disposable Aircraft-CICADA). His concept involves creating cheap, ultra-small UAV-controlled GPS systems that can be launched in large numbers and use microelectronic devices in the form of printed circuit boards for various purposes embedded in their structural elements (wing surfaces, fuselage) as payloads. The constructive elements of the micro-UAV contain printed circuit boards embedded in them in compliance with all the requirements of aerodynamics. 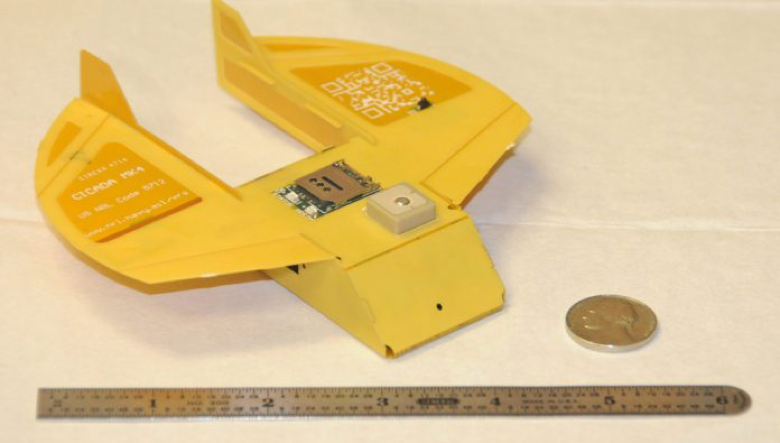 Due to their small size and the absence of an engine, gliders based on the CICADA principle become hardly noticeable and almost invulnerable to enemy air defense systems, which makes them very useful when used as repeaters, radio jammers, airborne contaminants, etc. in tactical level.

The United States Naval Officer Development School created a quadrocopter capable of landing on the water and taking off from it. The device can be equipped with a hydroacoustic system for detecting submarines. The device, called Aqua-Quad, works on solar energy.

It is built on a four-beam scheme with the location at the ends of the rays of electric motors with propellers with a diameter of 360 millimeters each. Between the rays are 20 solar panels. The mass of the device is about three kilograms. The Aqua-Quad flight time is about 25 minutes. Being on the water, the device can operate for several days, playing the role of a sonar buoy.

The American company FLIR presented a new compact thermal imager “Boson”, which can be installed on almost any class of equipment, including unmanned vehicles and UAVs. 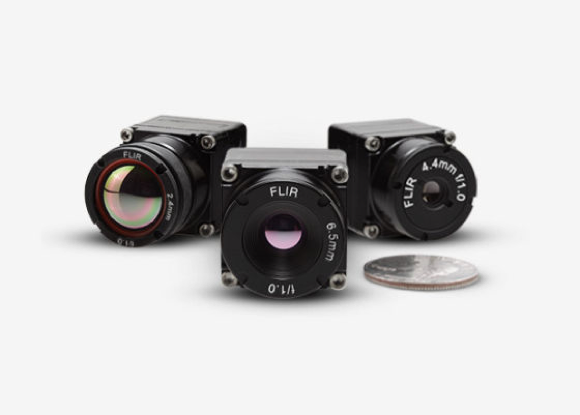 The size of the camera without a lens is 21х21х11 mm, weight - 7,5 g. The device operates in the 7,5-13,5-mic wave band. It is capable of shooting in two resolutions: 640x512 and 320x256 pixels. 15 lens options with different viewing angles are supplied with the camera as an option. The imager uses a 3,3 power supply in the device, the power consumption of the device - 500 milliwatts. Boson can operate at temperatures from -40 to + 80 degrees Celsius. For the processing of data in the device meets the new processor Myriad 2.

US Navy in September with. will receive the largest in the world, the first multi-purpose nuclear aircraft carrier "Gerald Ford". Its length is 332 m, weight is 100 thousand tons.

It is planned to accommodate about 4400 people on board. and 75 units aviation technicians. The Gerald Ford is expected to become the runway for F-35 fighters. According to preliminary estimates, 25% more planes will be able to fly from its board than from aircraft carriers that are currently part of the US Navy at the present time.