Mystery of a single tank 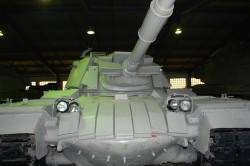 History The appearance of the Israeli version of the American M-48A3 in the Research Test Range of Armored Vehicles resembles a spy novel. And there is no complete clarity so far. Israelis have long made efforts to return this particular car home. Finally, the current Prime Minister Benjamin Netanyahu was able to convince Vladimir Putin to make an exchange. We give them a museum exhibit. They are the efficient tank from their old arsenals.


7 June 2016 of the Volga-Dnepr Russian Airlines An-124-100 transport aircraft was delivered from Israel by the An-3-48 transport aircraft, and it was unloaded by the Israeli Magah 3 tank, also known as M-XNUMXXNUMX. Perhaps this tank will go to Israel tank, until recently the former one of the most prominent exhibits of the armored museum in Kubinka.

Israeli Prime Minister several times publicly thanked the Russian president for agreeing to return the tank, which had witnessed the battle at Sultan Yakub. Then this car, as it was considered for many years, went missing along with the crew. And Netanyahu, in his words of thanks, stressed that "the missing soldiers have no graves, their parents have no place where they could come - so will at least the tank."

Any Arab-Israeli war of the late twentieth century for the USSR turned around the fact that the military and defense science received samples of the latest Western weapons. Tank M-48А3 Magah turned out to be one of the most interesting trophies of the 1982 military conflict of the year.

It was the first to use the dynamic armor protection of the Israeli design Blazer. Neither in the USA nor in the USSR there was anything similar then. Case and tower tank hung with some boxes that seemed to destroy the cumulative stream and even a point-blank shot from RPG-7 did no harm. It seemed unthinkable.

Therefore, when in the middle of summer 1982, the fighting in Lebanon subsided, a small but very professional group of Soviet military-technical specialists immediately went there. Their main task was to collect the preserved “boxes” of dynamic protection and bring them to the Union for study.

Recall 5 June 1982, Israel decided to invade Lebanon. The operation was called the “World of Galilee”. In the north of the country in the Lebanese valley, also known as the Bekaa Valley, local tank battles took place, in which the IDF armored vehicles and Damascus army tanks converged.

A complete failure for the Israelis ended the clash near the village of Sultan Yakub, which happened on June 10-11. Details about it have never been reported. Not surprising. It was there that M-48А3 tanks with dynamic protection were used for the first time, and without any triumph. Tankers were surrounded, from which they made their way with difficulty. Eight M-48A3 were hit. Moreover, four cars were captured by the Syrians and taken out of the battlefield.

So, when the Soviet specialists who worked with the remnants of the Israeli tanks, inherited by the Syrians, collected all the more or less preserved elements of dynamic protection and loaded them into the plane to be sent to the USSR, they were told that there was a surprise. It turned out that there was a completely tough M-48А3 in all its protective bodywork. Those who examined this trophy then, then told their colleagues that the tank made an impression of the combat vehicles that had just left the fleet, and not from the hot battlefield. Our specialists were told: wait for a gift in Kubinka.

There are different versions of how the captured tank was delivered to the Union. According to one of them - by sea, and then by rail. According to another, M-48А3 “Magah” was loaded into An-22, which soon landed at the military airfield in Kubinka, from which it was within easy reach of the 38-th Research and Development Testing Institute of armored vehicles in the same Kubinka.

In the fall of 1982, the tank and its amazing protection began to be tested in full. Our specialists quite critically assessed the miracle of Israeli military technical thought. The system "Blazer" consisted of very bulky boxes of various sizes that were mounted on the hull and tower. In addition, they did not guarantee one hundred percent protection even from hand grenade launchers, especially from cannon-shaped cumulative projectiles - therefore the tanks covered by them under Sultan Yaakub got burned.

However, let us pay tribute to the Israelis. It was their M-48А3 "Magah", lost near Sultan-Yakuba and declared to be in Kubinka near Moscow that gave an impetus to the accelerated and successful creation of dynamic defense in the USSR.

Very soon, the armored units of the Soviet Army received their own dynamic defense. It was much more elegant than the Israeli prototype, consisted of relatively small boxes of the same size, with which the body and armor were tightly covered. The first generation of dynamic protection guaranteed the destruction of the cumulative jet, today even the core of the sabrendor is destroyed. The tank becomes impenetrable.

According to experts, it is significantly superior and superior to that developed and developed in the West. And M-48А3 "Magah" took its place in the museum, which then was part of the military institute, therefore closed, and inaccessible to foreigners.

Alas, the fate of the museum is unenviable. He has already started to hit. Many tanks and armored personnel carriers decided to send to the amusement park "Patriot", to transfer something to other museums. Something to return to the previous owners, as is the case with the Israeli tank.
When the tank exposition was made open, Israeli veterans-tank crews became involved in it. And they always asked the guides: do they know where the crew was buried and how much blood was inside the tower. However, they argued: since Israeli tankers do not surrender in captivity, it means that they died. No response was received.

The current guides have no idea about the fate of the crew.

But even the old ones, even those who took part in the M-48А3 “Magah” tests, could not have said anything. An Israeli tank arrived at the Kubinka range without any traces of blood and without any damage. As a completely targeted car turned out to be at the disposal of the Syrians, if Israeli tankers do not surrender in captivity, this is probably the biggest mystery.

It is worth repeating, the Soviet engineers saw in the Bekaa Valley M-48А3 "Magah" almost in perfect condition. And his crew - Zechariah Baumel, Zvi Feldman and Yehuda Katz are still considered missing.

And it remains only to pay tribute to the Government of Israel, that it never forgets about its soldiers.
And if they cannot be found, it returns the combat vehicle on which they fought and, quite possibly, died.

Ctrl Enter
Noticed oshЫbku Highlight text and press. Ctrl + Enter
We are
Interview with Viktor Boyarsky: "Icebreaker is an exhibit in itself"Armor is strong. Report from the armored plant, where equipment is repaired for ATO (Ukraine)
Military Reviewin Yandex News
Military Reviewin Google News
69 comments
Information
Dear reader, to leave comments on the publication, you must sign in.