15 2016 June
4
In 1903, the American company Winchester Repeating Arms Company introduced the world's first commercial self-loading rifle chambered for the ring ignition Winchester Model 1903. This development of the designer Thomas Crossley Johnson attracted the attention of amateur shooters, and later even became the subject of military contracts. Releasing a new weapon, the manufacturer did not stop the development of self-loading rifles. Soon a new version of the weapon appeared, which became the world's first commercial self-loading rifle chambered for central ignition. By year of production, this product received the designation Model 1905.


The basis for the first serial self-loading rifles of the firm "Winchester" were the previous developments of TK. Johnson Back in 1901, he patented a new automatics based on a free gate, which could be used in the manufacture of advanced systems. Soon, the design described in the patent was implemented in a full-fledged M1903 rifle chambered for .22 Winchester Automatic. After that, the designer continued to develop the existing system with the use of some new ideas. First of all, it was decided to use more powerful central ignition cartridges. Also it was necessary to apply a new design of some units.

Especially for the advanced self-loading rifle, two new cartridges with different characteristics were developed. The main reason for the creation of new ammunition was the specificity of the cartridge market at the beginning of the last century. Many manufacturers, taking into account the requirements of buyers, continued to produce various cartridges with a propellant charge of black (smoky) powder. Such ammunition could not be used in self-loading weapons with a high rate of fire, because they left a lot of soot and could lead to damage of weapons. Thus, for the new rifles, cartridges with smokeless powder were required, the development of which TK took up. Johnson As part of the Winchester M1903 project, the .22 Win Auto cartridge was created, and the new M1905 rifle was proposed for use with the .32 Winchester Self-Loading (WSL) and .35 Winchester Self-Loading cartridges.

The .32 WSL cartridge was equipped with a 8,2 mm caliber bullet and a 31 mm long sleeve. An 11-gram bullet capable of speeds over 420 m / s was used with a muzzle energy of the order of 960 J. Ammo .35 WSL received an 8,9-mm bullet with a weight of 12 g and a sleeve of 29,3 mm length. Such a cartridge could accelerate a bullet to 425 m / s and give it more 1050 energy. J. In its dimensions, Winchester Self-Loading products differed from other ammunition of the time, which was done to avoid using incorrect cartridges and rifle damage.

In terms of overall structure, the M1905 rifle should have hardly differed from the previous M1905. It was proposed to use a long barrel connected to a detachable receiver. For ease of operation, the weapon had to be equipped with wooden fittings in the form of separate forend and stock. The only major external difference between the two rifles was the presence of a box magazine in a newer model. For a number of reasons, TK Johnson decided to use the new ammunition system.

The main part of the promising rifle Model 1905 was the receiver, divided into two parts. The top was a U-shaped part with fastenings for the barrel, reloading system and parts of automation. There was also a window for ejection of spent cartridges. The second part of the receiver was made in the form of an L-shaped frame and was supposed to serve as the basis for the firing mechanism. In addition, on its lower part were provided attachment for the store. Two parts of the receiver should have been connected using the front latch and rear screw. After connecting the two large units, the weapon was ready for use. 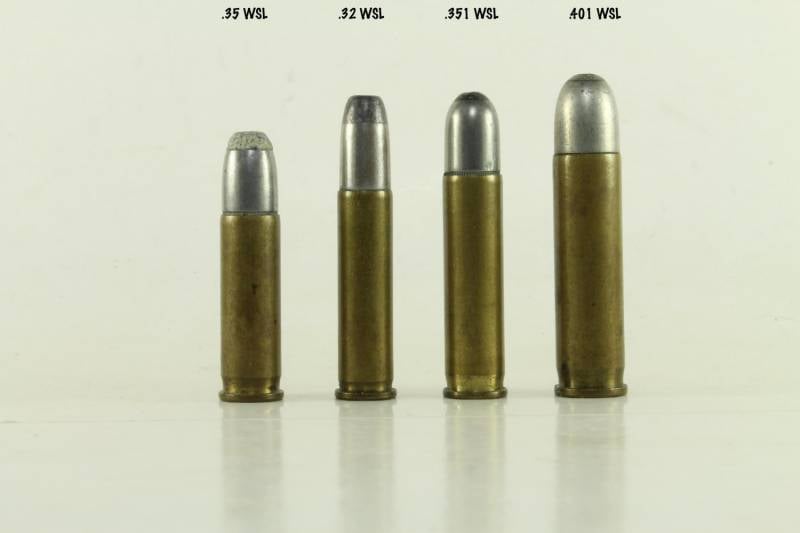 On the mountings of the front wall of the receiver was mounted rifled barrel. The basic version of the rifle was to be equipped with a barrel length 560 mm (68,3 caliber for .32 WSL or 62,9 caliber for .35 WSL) of different calibers. Under the barrel inside the forearm should have been placed a cavity for the installation of the return spring of the bolt and part of the bolt carrier. In addition, a spring-loaded rod was located under the barrel to perform a recharge.

In the new project it was proposed to use a new design of some automation components. In particular, the shutter and its frame, which increased and weighed, underwent significant changes. A small-sized shutter had to be installed on an elongated part of a concave complex profile. In the central part of this detail there was a hole for feeding cartridges. The front part of the bolt carrier should have been under the rear of the barrel, in the cavity under the forearm, and in contact with the return spring. The return spring with a guide rod with its rear end rested against a cracker under the barrel, the front one - against the front of the bolt carrier.

Inside the gate of the changed sizes the spring-loaded drummer was located for a shot. In addition, the bolt was equipped with systems for extracting and ejecting spent cartridges. 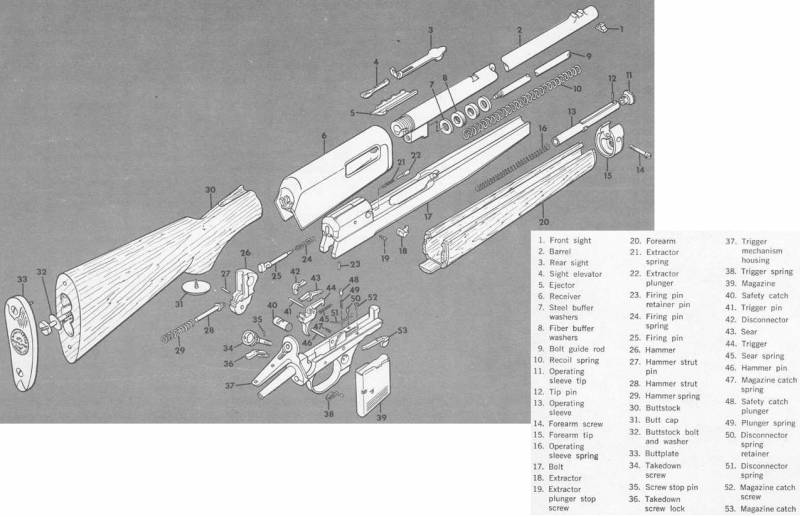 The design of the gate has been redesigned in connection with the use of a more powerful cartridge. The increase in recoil impulse required a corresponding weighting of some automation components. The use of a heavier slide frame and a reinforced recoil spring made it possible to compensate for increased recoil. It should be noted that when developing the previous Model 1903 rifle, which used a low-power cartridge (muzzle energy not more than 150 J), this problem was virtually absent. As a result, two samples of weapons should have noticeable differences with similar principles of work.

Parts of a hammer-type firing mechanism were mounted on the rear frame of the receiver. There was a trigger with its own spring, a sear and a large swinging trigger. The latter was significantly different from that used in the M1903 rifle, as the new store allowed for a considerable amount of free space inside the rear of the receiver. The trigger was connected to a mainspring equipped with a guide rod. As part of the trigger was present automatic fuse, blocking the movement of parts.

The Winchester Model 1905 rifle was supposed to get a new design store. Instead of not too comfortable tubular, placed in the butt, was proposed detachable box. The store of the first version contained five cartridges and was equipped with a spring-loaded feeder. Later, during the development of weapons, the store appeared twice as large. Fastening the store was carried out with the help of a prong and a latch. The back wall of the store was in contact with the trigger hook.

Sights of the existing design were saved. A movable adjustable front sight was placed on the muzzle of the barrel, and in the rear of the barrel was an open mechanical sight. Also, according to some sources, some rifles were equipped with ring-type sights.

Used furniture made of walnut wood, covered with varnish. At the front end of the forearm, a collar with a lid was fastened in which there was an opening for the core of the recharge system. In the butt plate there was a cavity for carrying cleaning supplies. On the forearm yoke and on the butt were fastened snappers for the belt.

Like the previous model, the 1905 rifle of the year was produced in two versions with different finishes. A cheaper (28 US dollars at the time of release) version called Plain finish received smooth polished hardware. For the 43 dollar, you could buy a rifle in the Fancy finish version with a notch on the wooden parts and a different finish. The mechanics of both versions was the same. 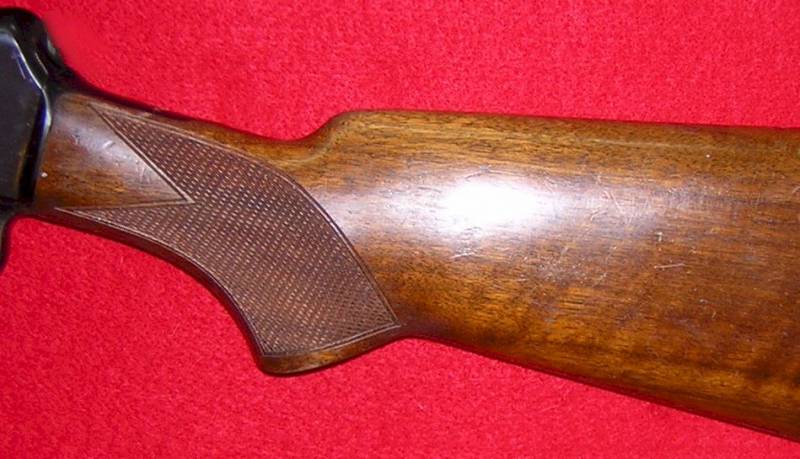 The Winchester Model 1905 rifle as a whole retained the principles of operation of the previous system, laid down during the development of the proprietary project. However, due to some design changes, noticeable differences should have been present. In particular, the use of a new store design had a noticeable effect on the operation of the mechanisms.

To prepare the weapon for use, it was necessary to detach the magazine, place 5 or 10 cartridges in it, and then return them to the place. Further, with the help of a lever under the barrel, the mechanisms were moved and the cartridge was sent and the trigger was raised. After pressing the fuse button, the rifle was ready to fire.

When pressing the trigger hooks, the trigger was unlocked, which, under the influence of the mainspring, hit the firing pin and fired. The recoil impulse forced the valve to move backward, compress its return spring, remove the empty sleeve and press the trigger. Upon reaching the extreme rear position of the bolt, the liner was ejected and the trigger was fixed. In addition, at this moment, the hole in the bolt carrier reached the receiving window of the store, which allowed the upper cartridge to get inside the receiver.

When moving forward with the help of a return spring, the shutter had to send a cartridge and press it to the chamber. Locking is not provided. After the release of the bolt to the extreme front position, the weapon was ready for a new shot. To continue shooting, you had to pull the trigger again. After the store was empty, it was necessary to replenish the ammunition and re-cock the mechanisms.

The new Winchester Model 1905 rifle, after the necessary tests, went into mass production and was offered to potential customers. Due to the absence of similar systems on the market, this product became the world's first commercial model of a self-loading rifle chambered for central ignition. Thus, TK Johnson was able, twice and with a minimum interruption, to become the creator of a new class of weapon, while Winchester remained in stories as a manufacturer of these systems.

Four variants of M1905 rifles were put into production. They differed from each other in the type of cartridge used and the finish. The customer could purchase a weapon for the .32 Winchester Self-Loading cartridge with a “smooth” finish, a “fashionable” version for the .35 WSL cartridge or another version of the rifle that most closely matches his desires and capabilities. 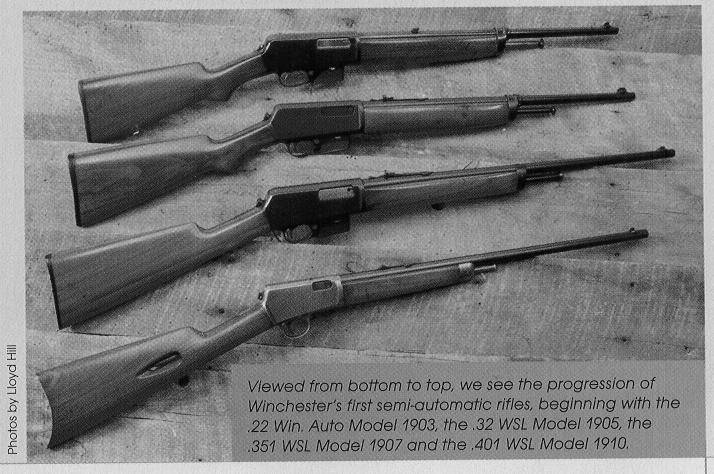 The first version of the Model 1905 rifle was produced without any special changes to the 1909 year. After this, a slight modernization was undertaken, which did not concern the main mechanisms. So, it was decided to change the design of the butt, equipping it with a pistol protrusion, and redo some other details. The rest of the rifle arr. 1909 almost did not differ from the weapons of the basic version.

Production of rifles Model 1905 in the original and modified versions continued until the 1920 year. During this time, it was released a little less than 30 thousand rifles for different cartridges and with different finishes. Customers did not give a clear preference for weapons under a particular cartridge, while one finish was much more popular than the other. According to reports, 20 has produced and sold thousands of cheaper Plain finish rifles. The remaining amount was in the Fancy version.

For various reasons, in 1920, the release of the Winchester Model 1905 rifles was discontinued. During this time, released less than 30 thousands of weapons. The world's first commercial self-loading rifle chambered for central ignition could not interest shooters in the same way as the previous M1903 specimen. Nevertheless, some new ideas were implemented in the M1905 project, which were further developed in the new developments of T.K. Johnson and Winchester. On the basis of the Model 1905, M1907 and M1910 rifles were soon created, differing from it in some elements of the structure. It should be noted rifle arr. 1907 was commercially more successful. This weapon was produced for half a century and gained a certain popularity not only among amateurs, but also among military people of different countries.