14 2016 June
6
In September 1944, the German industry released the latest self-propelled guns such as 15cm sIG 33 (Sf) auf Pz.Kpfw.38 (t) Ausf.M Grille. Termination of their production was due to the decision to complete the assembly of the necessary chassis. However, self-propelled guns with 150-mm guns were of great interest to the troops, which led to the emergence of a new car of this class with the required weapons. This development remained in stories called 15 cm sIG 33 / 2 (Sf) auf Jagdpanzer 38.

In mid-1944, the company Böhmisch-Mährische Maschinenfabrik AG (Czechoslovak ČKD) was engaged in the construction of two tracked chassis, used as the basis for various equipment and representing the further development of the light tank Pz.Kpfw. 38 (t). The Jagdpanzer 38 Hetzer self-propelled guns were built on the basis of one chassis, while others were used in the construction of the Grille self-propelled guns and ammunition carriers for them. The chassis of self-propelled guns of the second type did not differ in high characteristics of protection, which is why over time it ceased to suit the military. For this reason, by the fall of the 44th command decided to stop the production of such machines.

Completing the assembly of the chassis led to the cessation of the release of ACS Grille Ausf.M, but the troops still needed new systems of a similar class. For this reason, in September 1944, the German command requested the development of another version of the carrier 150-mm heavy infantry weapons. The base for this machine was to be the ACS Jagdpanzer 38 Hetzer. This solution allowed us to ensure the delivery of the required equipment, as well as to do without a serious restructuring of the production of armored vehicles. 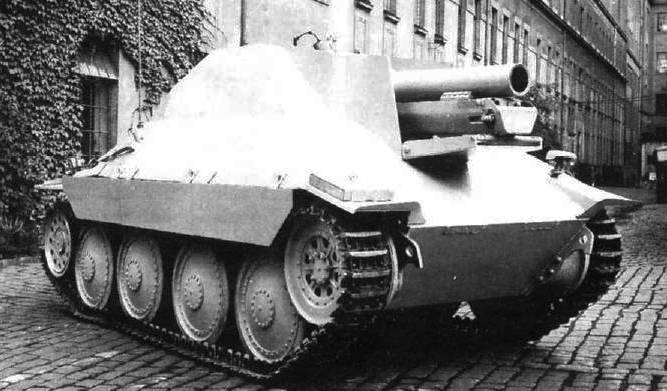 However, not wanting to reduce the production of serial self-propelled guns with 75-mm guns, the military demanded to build a new self-propelled gun based on a different chassis. The rebuilding of heavy guns required the construction and repair of armored Bergepanzer 38 armored repair and recovery vehicles. These BREM was a modified version of the "Hetzer" with no weapons and other design of the upper part of the body. The remaining units of the two machines were as unified as possible. Anyway, regardless of the specific type of base machine, the prospective ACS should have been based on one of the chassis of the Jagdpanzer 38 family.

The types of the selected weapon and the base chassis were reflected in the official designation of the prospective armored vehicle - 15 cm sIG 33 / 2 (Sf) auf Jagdpanzer 38. In addition, in some sources behind this self-propelled gun is saved the name of its predecessor - Hetzer.

For the restructuring of the ACS or BREM in the carrier of heavy infantry guns, some refinement of the armor case and other structural elements was required. The corps was supposed to partially preserve the existing lines formed by several inclined armor plates. The frontal part was made of 60-mm armor, the protection of the sides and the stern was imposed on sheets of thickness 20 mm. To the existing inclined upper front sheet, the shape of which was slightly modified, an additional detail was added. In addition, there was an additional box to install the gun. It consisted of vertical sides and a swinging frontal sheet, which could be lowered and raised, acting as a tool mask. Sheets 10-15 mm thick were used as part of the gun protection.

The 60-mm frontal sheet with a window for the gun, as well as the 20-mm bead and 8-mm feed formed a superstructure, the design of which resembled the hull. All sheets were installed with a slope inward and increased the size of the habitable compartment. The roof of the cabin was not provided. Get into the car could be right through the side of the cabin. 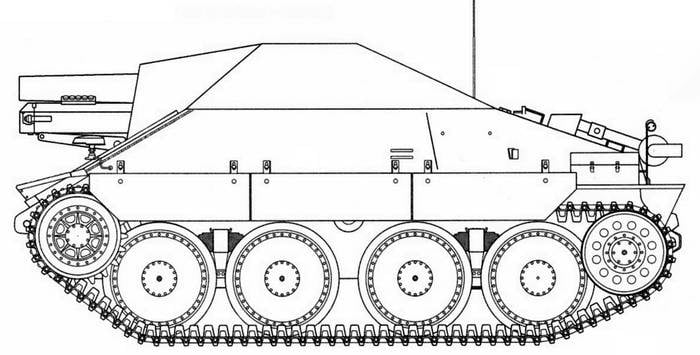 Scheme of the car. Figure Tehnikapobedy.ru

The existing layout of the hull with the front of the transmission and the integration of the control compartment with the combat compartment into a total habitable volume was preserved. Behind the partition in the stern was located the engine with part of the units. Thus, despite the processing of the hull and the use of other weapons, the overall architecture of the self-propelled gun remained the same.

SAU 15 cm sIG 33 / 2 (Sf) auf Jagdpanzer 38 was supposed to keep the Praga AC / 2 carburetor engine with 150 horsepower. The main element of the transmission was a six-speed gearbox with five forward gears and one reverse. The front-end drivetrain was coupled to driving wheels.

Chassis completely borrowed from self-propelled Jagdpanzer 38 and almost did not differ from the units of the previous technology based on Pz.Kpfw.38 (t). On each side, four support rollers were mounted, interlocked in pairs and equipped with leaf springs. Used front drive wheels and stern guides.

In front of the cabin, the installation of new weapons was envisaged. On a machine with manual pointing drives, an 15 cm sIG 33 gun was to be mounted. The attachment of the gun made it possible to direct it within the horizontal sector with a width of 10 ° with elevation angles from 0 ° to + 73 °. This allowed to fire both direct fire and from closed positions. In all cases, for guidance should use the sight Rblf36, borrowed from the base towed gun carriage guns. 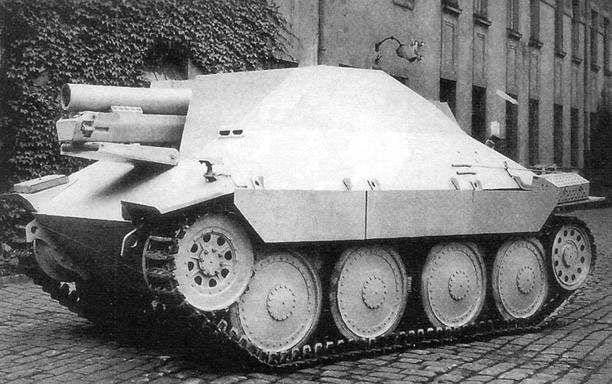 The 150-mm gun had a barrel of 11 caliber length and could accelerate shells up to speeds of the order of 240 m / s and send them to a distance of 4,7 km. The design of the gun included a sliding horizontal slide and hydropneumatic recoil devices. The ammunition could include separate loading shells of several types: high-explosive fragmentation, smoke and cumulative. A trained calculation could do up to three shots per minute.

In a relatively small combat compartment of the 15 ACS cm sIG 33 / 2 (Sf) auf Jagdpanzer 38, we were able to place several racks for ammunition in 15 shots. For a long shooting self-propelled gun needed the help of ammunition transporters.

For self-defense against enemy infantry, the crew of the armored vehicle had to use one MG 34 or MG 42 machine gun of the 7,92 caliber mm. This weapon and ammunition for him was proposed to be transported in one of the structures of the fighting compartment. There were no assembly systems on the wheelhouse, which allowed to keep the machine gun in combat status all the time.

The crew of the new combat vehicle consisted of four people. The driver was placed in front of the hull, to the left of the gun. There were viewing instruments for observing the road in the frontal logging room. The workplace of the commander-gunner was placed to the left of the gun, behind the driver. Also in the fighting compartment had to work two loaders. The crew’s additional responsibility was to use the FuG 16 radio station. 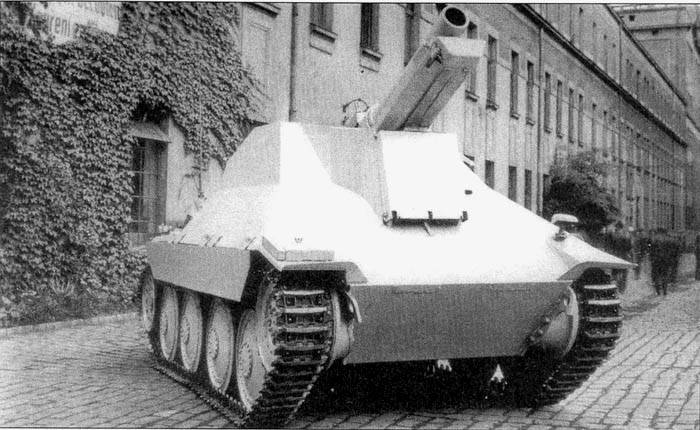 The barrel is raised, the mask automatically closed the opening. Photo Aviarmor.net

Despite the design change, the new ACS did not differ from the previous car in its size. Moreover, due to the use of tools with a shorter barrel length, it was possible to significantly reduce the overall dimensions. SAU 15 cm sIG 33 / 2 (Sf) auf Jagdpanzer 38 had a total length of 4,87 m with a width of 2,63 m and a height of 2,2 m. The combat weight was 16,5 t. Due to some dew of construction weight, the mobility had to be slightly reduced: the maximum speed on the highway fell to 32 km / h, power reserve - 130 km.

The order for the development of promising self-propelled guns with the 15 cm sIG 33 tool appeared in the early autumn of 1944. Design work was completed as soon as possible, so that by the beginning of winter, BMM had presented a prototype of a new combat vehicle. Soon the prototype was tested and confirmed the design characteristics. The machine had acceptable mobility and maintained the required high firepower.

According to the test results, it was decided to take 15 cm sIG 33 / 2 (Sf) auf Jagdpanzer 38 into service and start the mass production of such equipment. At the same time, however, the order for serial construction was received not by the developer, but by another organization. The company BMM at that time was loaded with other work, because of which the assembly of new machines was entrusted to another enterprise. According to various sources, it was Alkett or Krupp - the exact manufacturer has not yet been established, although it is known that they were not Czechoslovakia’s factories.

In December 1944 of the year, the manufacturer built the first self-propelled guns of the new type, the base for which, apparently, was the repair and recovery vehicles Bergepanzer 38. Over the next few weeks, the 24 BRAM was converted into ACS. After that, six more self-propelled guns based on other equipment were released. This batch was built by repairing and re-equipping the “Hetzer’s,” who returned from the front. Thus, at the end of 1944-o and the beginning of 1945, a total of 30 self-propelled 15 cm sIG 33 / 2 (Sf) auf Jagdpanzer 38 X-guns were built. 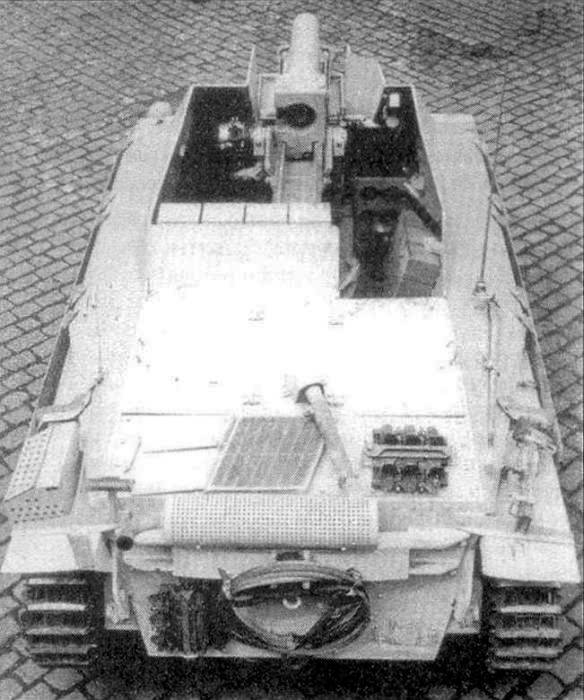 By the end of 1944, several dozen mouths of heavy infantry guns were present in the German armed forces, which were equipped with various self-propelled sIG 33 carriers and auxiliary equipment. Three dozen new self-propelled guns were handed over to the troops and distributed among several units. The staff of the mouth of heavy guns made it possible to transfer five such units to the new equipment - six cars for each.

Details of the combat use of the 15 cm sIG 33 / 2 (Sf) auf Jagdpanzer 38 are unknown. Probably, this technique was used by the troops in parallel with their predecessors and was used for the same purposes. Similar parameters of mobility and firepower allowed us to rely on similar combat effectiveness.

A number of 150-mm guns based on the Jagdpanzer 38 were used until the very end of the fighting in Europe. Later this technique was decommissioned. The fate of self-propelled guns was as sad as that of many other samples. In the postwar years, the equipment that was no longer needed was sent for cutting. As a result, all three dozen built cars ceased to exist. Samples 15 cm sIG 33 / 2 (Sf) auf Jagdpanzer 38 not preserved, there are only some photos of this technology.

SAU 15 cm sIG 33 / 2 (Sf) auf Jagdpanzer 38 remained in history as one of the last attempts to adapt the chassis of the tank Pz.Kpfw.38 (t) to solve specialized problems, as well as to make the Jagdpanzer 38 Hetzer self-propelled weapon a carrier of the new weapon. Due to the late start of work, a generally successful project did not lead to the construction of a large amount of equipment. As a result, solving combat missions on certain sectors of the front, such self-propelled guns could not affect the situation as a whole.