9 2016 June
41
The Tsar Cannon, one of the symbols of the Moscow Kremlin, is familiar to many as one of the iconic sights of the Russian capital. However, this bombard did not have to take part in the hostilities, although, as it turned out in the course of research, they still fired from it at least once. Anyway, it is more a monument, attracting tourists and having a decorative value. But this does not mean that artillery systems were not created in our country, which not only could be proudly called “king-cannons”, but were also widely used in combat operations. TM-3-12 can be safely attributed to such systems.


TM-3-12 is quite easy to decipher: marine transporter, type 3, caliber 12 inches. This is an 305-mm rail artillery 1938 model of the year. This railway super-heavy artillery system was equipped with some parts and mechanisms taken from the towers of the battleship "Empress Maria", which sank on October 20 1916 of the year under unexplained circumstances. It is only known that there was an explosion of the powder cellar on the ship, but it was not possible to establish what caused it. There is a widespread misconception that the guns for this artillery system were taken from the same sunken battleship, but this is not so. The guns for the creation of this artillery installation were borrowed from the old pre-revolutionary stocks, which were intended for unfinished line battle cruisers of the "Izmail" type. This information has the Central Museum of the Great Patriotic War 1941-1945, located in Moscow. It should be noted that all three TM-3-12 installations have been preserved to this day. One of them is located in the aforementioned museum on Poklonnaya Hill, the second is in the Museum of railway equipment named after V. Chubarov at the former Warsaw station of St. Petersburg, the third is located on the territory of the Krasnaya Gorka fort in the Leningrad Region. 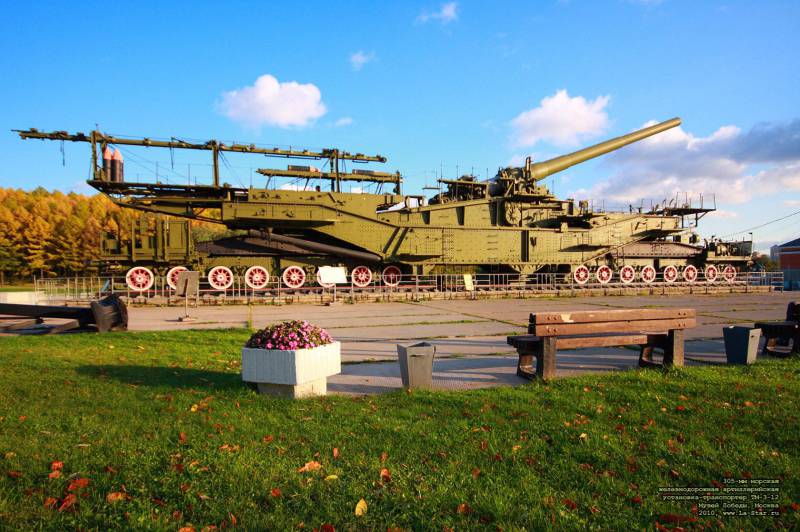 In total, three such super-heavy artillery systems were produced in the USSR, which were consolidated into the 9-th separate artillery railway division. The division consisted of 5 separate echelons, three of which were combat, which included the TM-3-12 artillery transporters themselves, one echelon was equipped with air defense systems, and another was a mobile base. As part of the division, these installations took part in the Soviet-Finnish as well as the Second World War. For the transportation and maintenance of a division of three TM-3-12 units, 110 rolling stock units and 459 personnel were necessary.

In October, the Central Design Bureau for Shipbuilding (TsKBS-1930) was formed at LMZ - Leningrad Metal Plant in October, which, under the leadership of A. G. Dukelsky, began developing a series of railway conveyors designed to house large-scale coastal defense weapons. As part of this work, the TM-3-1, TM-14-2 and TM-12-3 installations were created. The design of the TM-12-3 railway artillery installation began in 12 by the same design team, which at that time changed its name to TsKB-1935. The final draft of the conveyor was completed in May 19. The production of installations was established in the city of Nikolaev at the plant named after Marty. Their production was delayed for a number of objective reasons: the first installation was ready - 1936 July 1 of the year, the second - 1938 December 1 of the year, the third and last of the installations was ready 1938 January 1 of the year.

From 21 to 23 July 1938, the first installation was tested at NIMAP. At the same time, the drawbacks of her electrical equipment scheme were discovered and revealed. In the following two installations, this deficiency was eliminated; in addition, in order to facilitate the construction of conveyors, a number of parts were made instead of steel from duralumin. In January, 1939, all installations passed the second stage of testing, after which they began their preparation for troop testing. From 20 to 30 August 1939, all three TM-3-12 railway transporters passed ground tests, except for firing tests. By 7 February 1940, the installation passed the tests by firing at the Rzhevsky range, after which they were officially put into service. According to other data under Leningrad, they have already departed in January 1940. 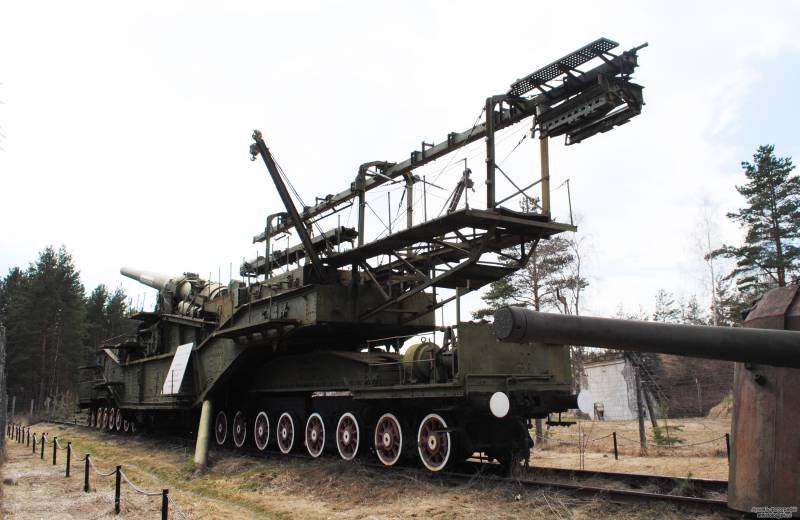 The TM-3-12 railway super heavy artillery system managed to take part in the Soviet-Finnish war. These artillery mounts were used to fire at the powerful defenses of the Mannerheim Line, and also bombarded Vyborg. The fire was carried out with the circular railway branch Sestroretsk - Beloostrov, which was commissioned in 1896, well known to the residents of St. Petersburg. This branch was ideally suited for the operation of these artillery systems. After the end of the war, the installations were shipped to the Hanko Peninsula, which the USSR received from Finland on lease for 30 years under the terms of the peace agreement. The first foreign naval base for the Soviet Union was created here.

It was here that the installation marked the beginning of the Great Patriotic War. With their artillery fire, 305-mm railroad installations suppressed Finnish gun emplacements located on nearby islands, and also did not allow the warships of the Finnish Navy to conduct targeted shelling of the Hanko peninsula. During the defensive battles (the defense of Hanko lasted from 22 June to 2 December 1941 of the year), they fired 108 at the enemy, spending approximately 570 shells (according to other sources - 625). It was not possible to evacuate these bulky installations from the peninsula in the conditions of war, so before evacuating the base they were partially dismantled, and partly they were destroyed by personnel by organizing explosions.

Despite this, between June 1942 and July 1943, the Finnish repair team was able to restore the TM-3-12 transporters and return them to service. After the withdrawal of Finland from the war under the terms of the truce concluded, all its trophies that were captured from the Soviet Union were subject to immediate return. In January, the 1945 of the year in combat readiness of the USSR received three TM-3-12 transporters back. The 305-mm railway artillery units were incorporated into the 1-th Guards Marine Railway Krasnoselskaya Red Banner Artillery Brigade. In service, they remained until the 1961 year, after which they were sent for conservation. 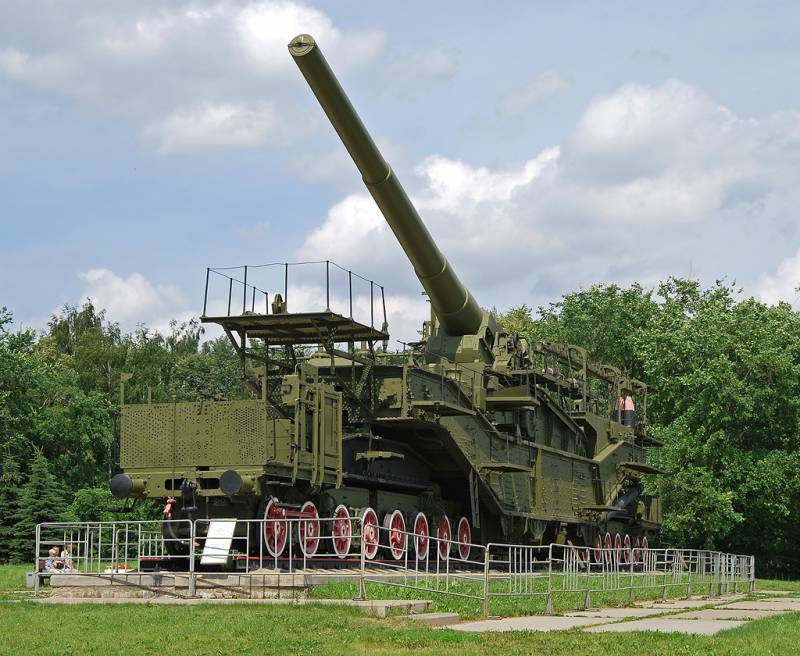 In terms of its design, the TM-3-12 transporter was a further development of the railway artillery systems developed earlier by the TsKBS-3 specialists, this is TM-1-14 (356 mm) and TM-2-12 (305 mm). As a prototype, it was decided to use the TM-2-12 transporter, but intended for installation on the TM-3-12 12-inch gun had a significantly longer length (52 caliber instead of 40 calibers from the TM-2-12 gun). In order to ensure the highest elevation angle specified by the technical specification in 50 degrees, the developers had to include a machine tool lifting mechanism in the combat position in the design of the new conveyor. At the same time, the Soviet designers took into account the rather negative experience of using the electromechanical drive for lifting the machine, implemented on the TM-1-14 rail artillery, this time using a hydraulic drive. In addition to improving the reliability of the lifting mechanism, this step reduced the time needed to perform this operation from 15,4 to 8,5 minutes.

Also was redesigned and feed scheme to the gun half-charges and shells. First of all, a shell cart was introduced into the cellar car, which rolled along the rails in the aisle between the racks. A cart loaded with a projectile rolled onto the front platform of the cellar car. The semi-charges on the front platform of the car were fed over the rolls, after which they were manually loaded into a cocor. Lifting the cocoons with the help of cranes was not very convenient in terms of time and masking. For this reason, in the design of the TM-3-12 conveyor, the length of the charging trolley was increased by supplying it with the winch necessary for lifting the kokor, this winch and replaced the cranes. But nevertheless they decided to keep the cranes, because with their help the supporting legs were installed. The charging platform had one more winch and a trolley for the horizontal movement of the cocor. It is worth noting that the TM-3-12 was the first conveyor where the filling process became fully automatic. So on TM-1-14 only a projectile was sent pneumatically, and half-charges were sent manually. On the TM-2-12 installation, both the projectile and the semi-charges were sent in a rush, but the latter simply did not reach their place in the cannon of the gun, therefore the final delivery was still carried out manually. And only in TM-3-12, the package was fully automatic and was produced by the throw of the charging table. This had a positive effect on the rate of fire of the installation: one shot at TM-1-14 took about 40 seconds, at TM-2-12 - 35 seconds, at TM-3-12 - 30 seconds, which allowed up to two shots per minute. 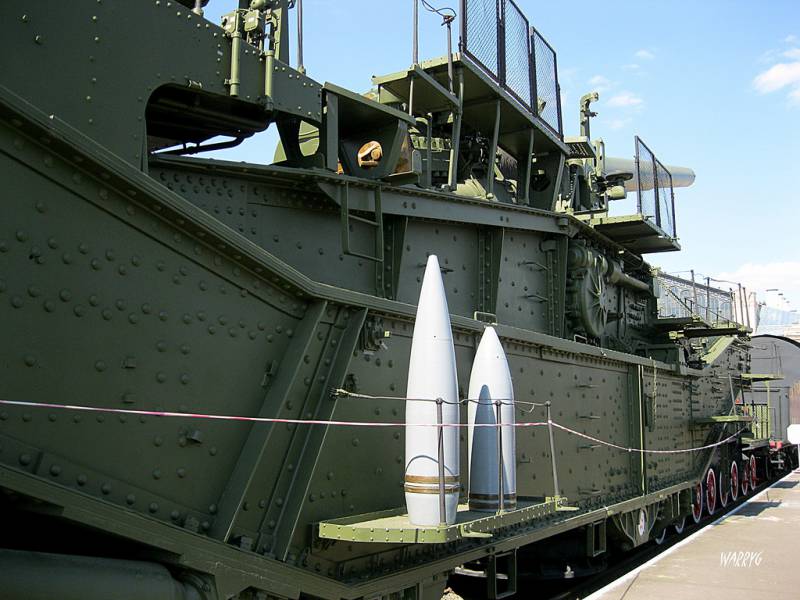 Even before the arrival of the TM-3-12 installations near Leningrad in January 1940, under the city in the strictest secrecy there was a construction of rotary platforms for circular shelling and railway entrances to them. The main method of firing for heavy Soviet railway artillery installations was firing from the base, which was a concrete massif with dimensions of 16x16x3 meters on an iron frame. A conveyor on rails that were embedded in concrete, drove on such a foundation. After that, the supporting cylinder was lowered from the conveyor, which was bolted to a concrete base. Then trolleys rolled out from under the conveyor, and he was already leaning only on the movable base (that same cylinder), as well as two rear rollers. The construction of such a structure was usually carried out for several weeks. At the same time, the installation was transformed from a railroad into an ordinary coastal one and was able to conduct circular shelling, which was especially important when firing at moving targets.

There was an artillery installation and an additional method of shooting - directly from the wheels. Since the horizontal guidance angle of the 305-mm guns on a railway installation did not exceed 5 degrees, the shooting was usually carried out from specially built railway branches, which were called "whiskers". The radius of the data of the whiskers was 500 meters. In order to change the angle of horizontal guidance of the gun by 10 degrees, the TM-3-12 transporter had to go several tens of meters along the line forwards or backwards.

The artillery installation ammunition consisted of both old armor-piercing and high-explosive shells of the 1911 model year, weighing 470 kg, and newer ammunition. The new ammunition that was put into service in the 1928 year, attributed the high-explosive long-range projectile mass 314 kg. The same projectile was used for firing from TM-2-12 artillery mounts. However, in this case, due to the significantly greater length of the gun, the initial velocity of the projectile increased to 950 m / s (against 823,5 m / s in TM-2-12), which allowed to confidently hit targets located at a distance of 29 632 meter.

Tactical and technical characteristics of TM-3-12: