10 2016 June
0
In February 1943, the German army received the first self-propelled artillery mounts 15 cm sIG 33 (SF) auf Pz.Kpfw. 38 (t) Ausf.Н or Grille, based on the light tank Pz.Kpfw. 38 (t). By summer, the industry had mastered the release of a new modification of this machine - 15 cm sIG 33 (SF) auf Pz.Kpfw.38 (t) Ausf.M, which had some advantages over the basic self-propelled gun. Nevertheless, even after modernization, only 18 shells of separate loading were able to be placed inside the close fighting compartment. A special ammunition transporter was required, capable of providing long-term combat operation of self-propelled guns. To this end, the Munitionspanzer 38 (t) Ausf.K was created.

The need for special carriers of ammunition to help self-propelled guns appeared immediately after the appearance of such equipment at the front. However, until a certain time, SAU crews had to rely only on the assistance of automotive vehicles. The proposal to create an ammunition transporter appeared only in the autumn of 1943. The new machine was supposed to enter the existing companies of heavy infantry guns and ensure timely delivery of self-propelled projectiles.

In order to save time, effort and resources, it was decided to build a new conveyor on the basis of the existing equipment, namely the ACS Grille Ausf.M. This armored vehicle was built serially on the basis of the existing light tanks, which made it possible to quickly establish the production of new technology, as well as simplify operation due to the high degree of unification. In addition, in order to maximally simplify production, it was decided to abandon the significant processing of the base machine. Only the fighting compartment, which now had to become a cargo compartment for transporting ammunition, was to undergo noticeable changes. The new machine, which has become the next version of the development of the tank Pz.Kpfw.38 (t), received the corresponding designation - Munitionspanzer 38 (t) Ausf.K. 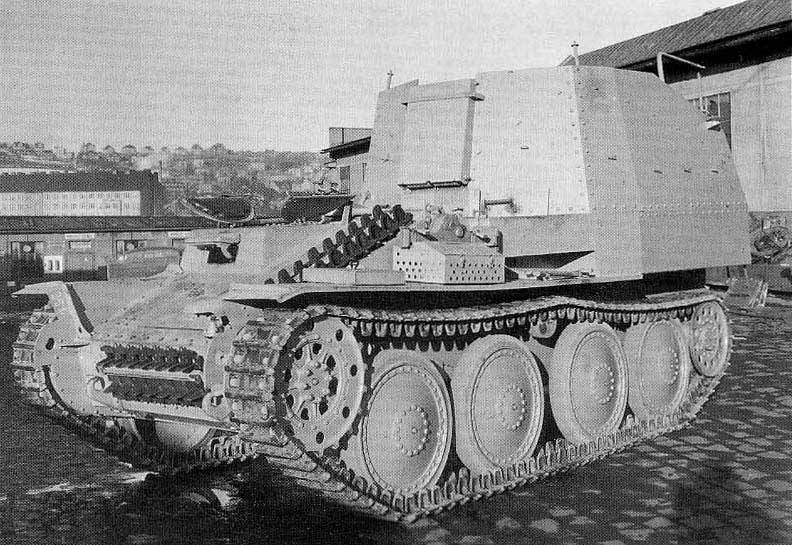 The new project meant the preservation of all the main units of the existing self-propelled gun. A ready-made tracked chassis with the hull of an existing design should have been used. Also maintained the existing felling of the fighting compartment. The layout of the car changed slightly, and all changes were associated with the new appointment. In front of the hull remained transmission units and a small office compartment with the workplace of the driver. The engine was located in the center of the hull, and the former fighting compartment in the stern was given under the cargo hold.

The case, borrowed from the Grille self-propelled gun, received two frontal sheets 20 mm thick. One of them was located vertically, the second - with a large slope. On the inclined sheet at the starboard side of the machine, a driver’s cabin was made, consisting of 15-mm parts. The hull sides should have been made of armor with a thickness of 15 mm, feed - of 10-mm. The cutting was to consist of several 10-mm sheets of different shapes, installed with a certain inclination inward. There were two frontal sheets placed at an angle to the axis of the machine, as well as the side with a beveled rear part. On the frontal part of the cabin, the swinging mask of the gun remained, but it was rigidly attached to other parts and was a fixed element of armor protection.

There are pictures of a certain car, similar to the Munitionspanzer 38 (t) Ausf.K, but with some differences in terms of the design of the wheelhouse. This model of the armored vehicle received a wheelhouse with a solid frontal part without a mask, and was also equipped with a hinged door in the rear sheet, under which there was a step. It was probably an early prototype or model of a promising machine. The serial equipment, for reasons of economy and acceleration of production, was maximally unified with the base ACS and received the corresponding cutting. 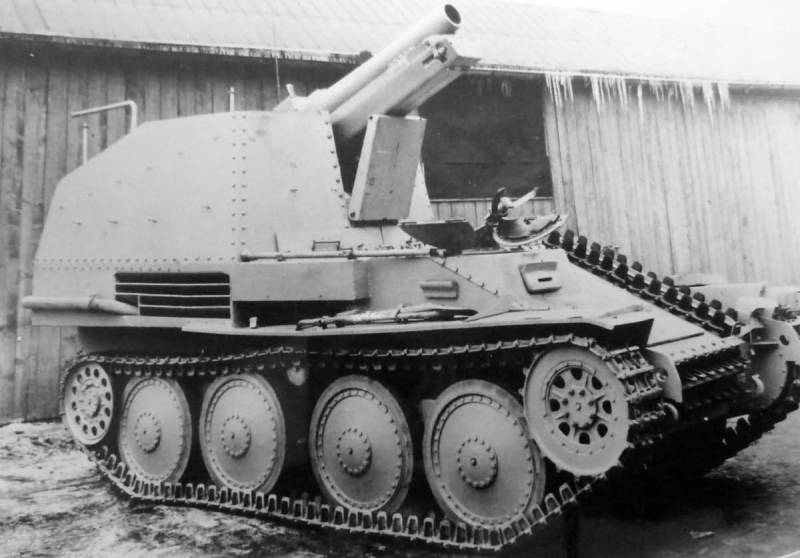 The car was to be equipped with a Praga AC carburetor engine with an HP 145 power. With the help of a small-sized cardan shaft, the engine was connected to a six-speed gearbox located in the front of the case. In the fencing shelves of the central part of the body there was an air intake and exhaust pipe of the engine cooling system. Transmission transmitted torque to the front drive wheels.

A ready-made chassis, created in the framework of previous projects, was used. On each side of the car there were four large diameter skating rinks. The rollers were blocked in pairs and fitted with leaf springs. Between the second and third pairs of rollers were placed supporting rollers for the upper branch of the caterpillar. Spiked drive wheels with a pinch gearing were placed in the front of the chassis, guides of a similar design - in the stern.

In the aft section of the 15 cm sIG 33 (SF) auf Pz.Kpfw.38 (t) Ausf.M base station was located the fighting compartment with the 150-mm gun, crew crew and ammunition. The new Munitionspanzer 38 (t) Ausf.K machine should have used the internal cutting capacity in a different way. The main task of this sample was the transportation of ammunition and assistance in combat work self-propelled guns. For this reason, the feed compartment in the new project has undergone some modifications. 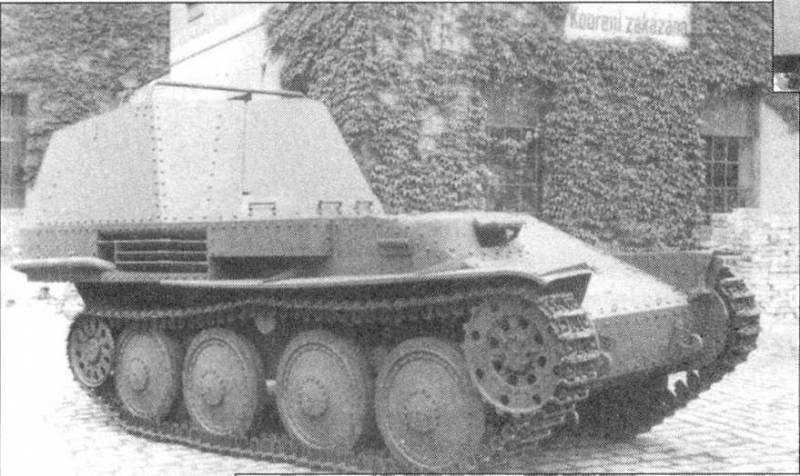 Munitionspanzer 38 (t) Ausf.K, an ammunition carrier, retained the available attachments for projectiles and sleeves on the right cheekbone and boarding house, in the stern of the left side and on the stern sheet. As already mentioned, the stacking of the base self-propelled guns of ammunition allowed to carry up to 18 shells and the same number of shells. The new project meant the installation inside the cabin of a special additional rack of box construction, placed on the site of the gun. In addition, in the freed volumes of the machine it was possible to place several more sets of mounts for ammunition. Due to a number of new units, the total cargo hold capacity was increased to 40 projectiles.

Due to the need for maximum simplification of the project and the rejection of significant innovations, it was decided not to equip the new ammunition transporter with special loading systems. It was suggested to transfer shells and cartridges to self-propelled artillery installations manually. The machines were supposed to stand next to each other, after which the crews were able to overload the shells from the laying of the conveyor to the SPG racks. After replenishing ammunition gunners could continue shooting.

Transporter Munitionspanzer 38 (t) Ausf.K received only a light weapon for self defense. To protect the enemy’s infantry and other threats, the crew had to use the MG 7,92 34-mm machine gun. Like the base SAU, the carrier of ammunition could not carry the king pin or turret to install a machine gun. It was proposed to transport this weapon in packing. 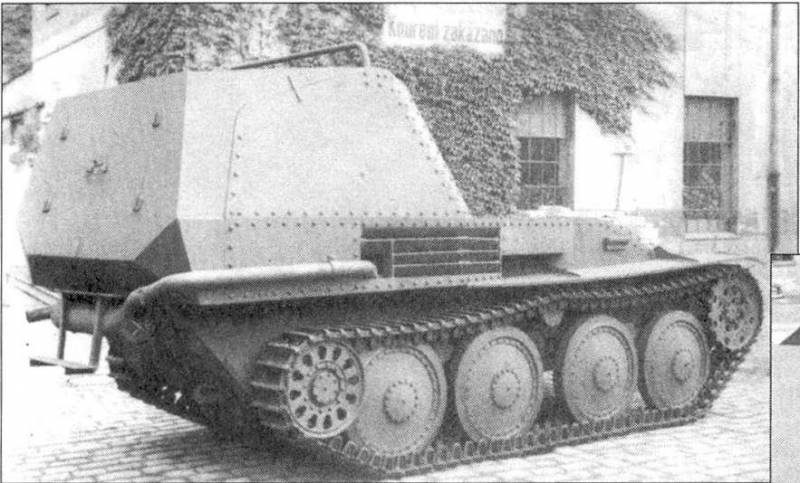 The crew of the carrier consisted of two people: the driver and the commander. The driver was placed in the control compartment inside the case. Workplace commander was in the cargo hold. The task of the commander was to use the FuG 16 radio station and participate in ammunition operations, both when loading onto a car and when replenishing ammunition self-propelled ammunition.

Being a modified version of the existing 15 ACS cm SIG 33 (SF) auf Pz.Kpfw.38 (t) Ausf.M, Munitionspanzer 38 (t) Ausf.K munitions transporter should not differ from it in size and weight. The length of the machine was 4,95 m, the width of 2,15 m, height - 2,47 m. Dismantling the gun with the installation in its place of the new ammunition storage means did not change the weight of the machine. The combat weight of the carrier with 40 shots reached 12 tons. Due to this, mobility on the basis of self-propelled guns was preserved: speeds up to 35 km / h and power reserve 190 km.

The first order for the delivery of the Grille Ausf.M serial self-propelled guns appeared at the beginning of 1943 and was carried out from April to June. During this time, Böhmisch-Mährische Maschinenfabrik AG (Českomoravská Kolben-Daněk) collected 200 ACS based on light tanks. In the autumn of the same year, the command decided to place another order for the production of self-propelled guns. In addition, it was then decided to order the ammunition conveyors that can work in the same units with the existing 15 cm sIG 33 (SF) auf Pz.Kpfw.38 (t) of both modifications. 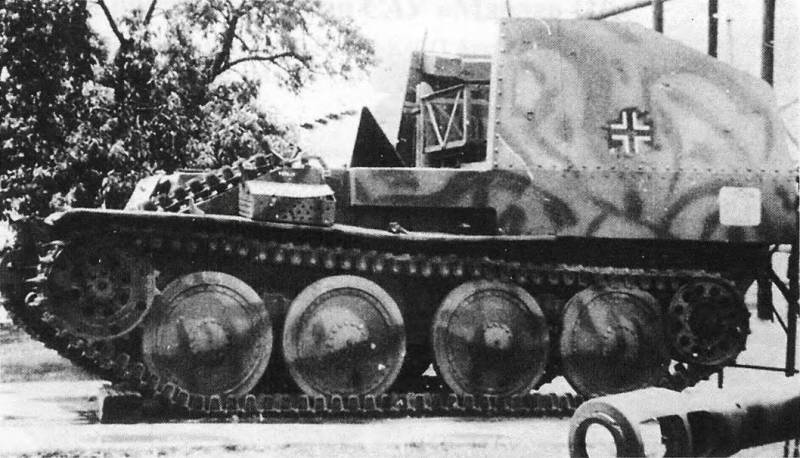 For certain reasons, the assembly of ammunition transporters began relatively late. The first self-propelled guns of the new order were built in October 1943 of the year, while the assembly of Munitionspanzer 38 (t) Ausf.K was launched only in January of 44. After that, the manufacturer continued work and for some time in parallel produced two unified machines for various purposes, intended for joint operation.

Some sources mention that this unification of the ACS and the conveyor had some interesting features. So, if necessary, the auxiliary machine could quickly and simply be converted into a carrier of a heavy weapon. For this purpose, an additional set of shelves was removed from it, instead of which the 15 cm sIG 33 gun was installed. The reverse alteration, in which the ACS could “turn” into a carrier, was not excluded.

Assembly of conveyors continued until May 1944. During this time, the BMM plant produced, according to various sources, from 90 to 120 machines of a new type. For example, quite often the number in 102 released by Munitionspanzer 38 (t) Ausf.K. This equipment was soon transferred to the customer, who was engaged in the distribution of new machines between the mouths of heavy infantry guns. 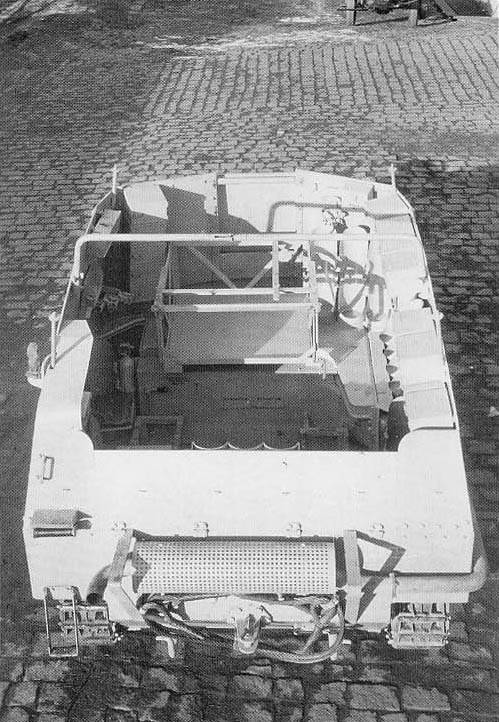 The interior of the cargo compartment. Photo Shushpanzer-ru.livejournal.com

The plans of the command involved the transfer of Munitionspanzer 38 (t) Ausf.K machines to the units armed with the Grille ACS of both modifications. Each company with six self-propelled guns was to receive two carriers of ammunition. The number of assembled conveyors made it possible to equip most of the companies with heavy infantry guns with the required equipment. Some such units, however, had to use other means of transporting ammunition.

Munitionspanzer 38 (t) Ausf.K ammunition transporters were not designed for permanent front-line work, which had a positive effect on their survivability. Without being exposed to significant risk, such a technique suffered minimal losses, which was not the case with the SAU Grille. As a result, a significant number of carriers survived until the very end of the war, when the operation of this technology ceased, for obvious reasons. After the end of the fighting, this technique lost all real prospects, which led to its cancellation and subsequent disposal. All built transporters during the first post-war years went to the smelting as superfluous. The same fate befell the ACS 15 cm sIG 33 (SF) auf Pz.Kpfw.38 (t): only one such machine of the “M” modification has survived.

The Munitionspanzer 38 (t) Ausf.K project was created as a solution to a major problem related to the operation of existing armored vehicles. By minor improvements of the base self-propelled gun, the project's authors managed to create a new specialized vehicle that simplified the work of artillery. Nevertheless, it should be noted that the carrier of ammunition appeared rather late, because of what the Grille ACS crews had to use less convenient auxiliary equipment for several months.