The project of modernization of tanks M1A2 SEP v.3 (USA)

9 2016 June
88
Main combat Tanks existing models can no longer fully meet modern requirements. This leads to the need to create a completely new technology or requires the modernization of existing samples. So, the American defense industry is currently creating a new project to upgrade existing M1A2 Abrams tanks. The new project received the designation M1A2 SEP v.3 and is a further development of similar developments of previous years.


Modernization of tanks M1A2 for projects of the SEP family (System Enhanced Package - “Advanced Systems Package”) has been carried out since the late nineties. The first version of the SEP project involved the use of enhanced frontal armor with uranium elements, the use of modernized sights with thermal imaging channels, the integration of tank electronics into the latest communications and command and control systems. Some other changes were also present when saving most of the components and assemblies.

By the end of the last decade, a new version of the project was created with the designation SEP v.2. This time the power plant was improved, the fire control system and its individual elements were updated, and new means of communication were used. In addition, in the M1A2 SEP v.2 project, some ideas and technologies developed as part of the Future Combat Systems program were used. According to The Military Balance 2016, the US Army currently has 1593 tanks M1A2 SEP v.2. At the same time, most of the M1A2 family tanks have not yet been upgraded for new projects. 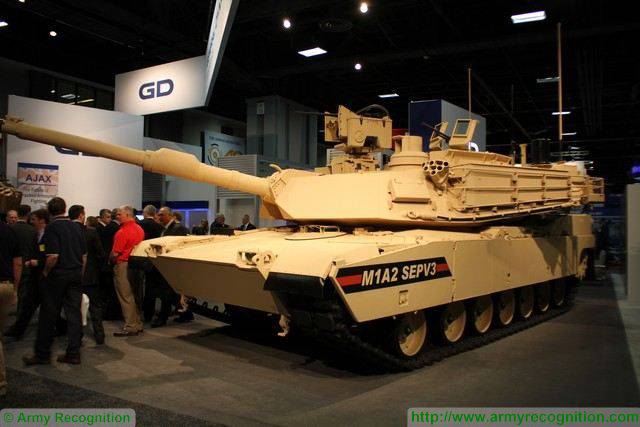 Later it was decided to develop a new project to modernize the existing main tanks in order to further improve their performance. The new project SEP v.3 involves updating the tanks with the “package” of the second version by installing some new equipment and updating their ammunition. At this time, the requirements for the modernization of tanks relate not only to electronic equipment, sights, etc., but also used ammunition.

The most notable innovations of the project SEP v.3 relate to the ammunition of the main tank guns. In the laying of tanks should appear two new types of projectile, with which the crews will be able to solve various combat missions. It is noteworthy that such a modernization of the tank led to the need to develop and introduce some new equipment for working with ammunition.

To increase the potential of the tank M1A2 SEP v.3 in the fight against enemy armored vehicles, a new armor-piercing projectile with improved characteristics was developed. Together with existing products in the future it is proposed to use armor-piercing sub-caliber shells of the M829E4 AKE type (Advanced Kinetic Energy - “Advanced Kinetic Energy”), developed by Orbital ATK. The M829E4 product is a unitary ammunition for the 120-mm M256 tank guns and is equipped with an armor-piercing piercing-assault projectile with a detachable tray. By improving the shape of the projectile and the use of new materials, the new ammunition is characterized by higher armor penetration characteristics.

In July last year, the M829E4 AKE projectile successfully passed the first stage of qualification tests, which made it possible to continue work and begin to determine future prospects. So, by the end of 2015, it was planned to manufacture and test the first pre-production batch of shells. By that time, the Pentagon and Orbital ATK had time to sign several contracts, implying the delivery of new projectiles for a total of about 80 million dollars.

In the foreseeable future, tests of the new projectile will be completed, after which it will be put into service and will fully enter into the ammunition package of the tanks being upgraded. According to some reports, the M829E4 armor-piercing projectile can also be used by other M1A2 tanks that have not been upgraded by SEP family projects.

The most important innovation should be a new projectile being developed under the AMP (Advanced Multi-Purpose - "Improved Multi-Purpose") program and known as the XM1147. The class of this product is defined as HEMP-T (High Explosive Multi-Purpose with Tracer - "Multipurpose high-explosive fragmentation with a tracer"). The project of a new multipurpose projectile was developed by the Armament Research, Development & Engineering Center, subordinate to the Pentagon. The goal of the project was to create a new high-explosive fragmentation projectile, which would significantly expand the range of fire missions solved by tanks.

The core technologies used in the AMP project were said to be ready for use back in the 2006 year, but the full-scale development of the projectile was launched only a few years ago. In its current form, the XM1147 projectile is a unitary ammunition with a total weight of 21 kg. Actually the projectile is made in the form of a feathered product with a programmable fuse. It is possible to explode when in contact with a target, after contact with a certain deceleration or at a given time in air.

The AMP / XM1147 projectile is equipped with a programmable fuse, which makes it possible to increase the efficiency of its use by employing the operating mode most appropriate for the situation. However, to use such functions, the tank must receive new equipment. The M1A2 SEP v.3 project involves the use of ADL (Ammunition Data Link - “Data Transfer to Ammunition”) equipment integrated into the fire control system. The task of the ADL system is to program the projectile fuse with the introduction of data received from the MSA of the tank. 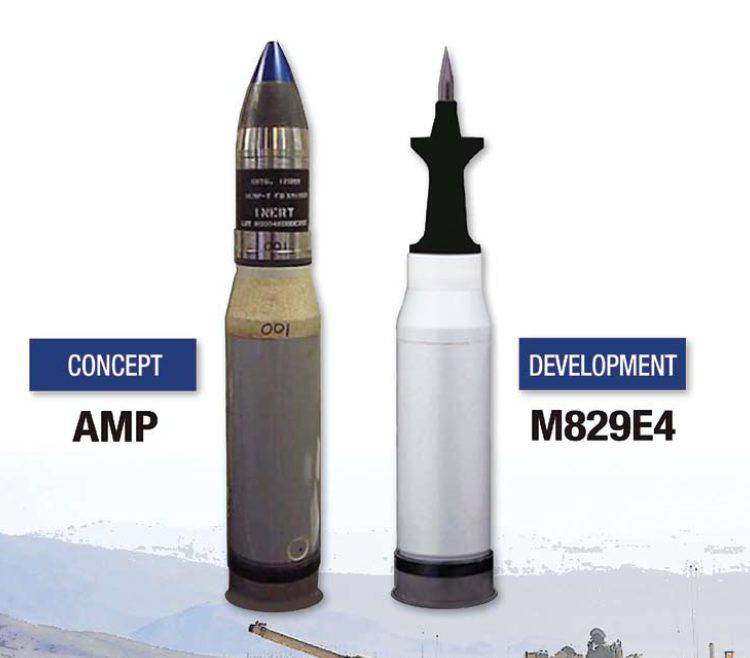 The fire control system should also include upgraded aiming devices. The gunner's sight and panoramic commander's sight should now be equipped with IFLIR thermal imaging devices. In addition, the commander's and gunner’s workplaces are proposed to be equipped with high-resolution liquid crystal displays. It is assumed that such a re-equipment of the tank will greatly simplify the detection of targets and their subsequent attack.

As part of the SEP v.3 project, additional tank armament is undergoing significant improvements. A remotely controlled combat module is added to the machine gun mounted above the hatch of the loader and covered with an armored shield with reinforced glass. For mounting on the roof of the tower, next to the commander’s workstation, the CROWS-LP module (Commander's Remote Operated Weapon Station Low Profile - “Commander’s remotely controlled armory low profile setting ”).

The CROWS-LP system is equipped with a large-caliber machine gun M2HB, which is controlled by electric drives. The module receives optoelectronic equipment for monitoring the situation, searching for targets and aiming weapons. The signal from the surveillance system is transmitted to the commander’s workstation. Management is carried out remotely. The placement and equipment of the CROWS-LP combat module allows you to use this system not only for its intended purpose, but also as an additional panoramic sight with limited capabilities.

To supply electricity to all existing and additional systems, it is proposed to use a new type of auxiliary power unit. Taking into account the experience of the combat use of equipment, it was decided to transfer it to the main corps booking with the aim of reducing the risk of defeat.

Recent reports on the SEP v.3 project also mention some reinforcement reservations. The purpose of such improvements is to enhance the overall parameters of the armored hull, with special attention being paid to protection against various explosive devices.

All other components and assemblies of the tank M1A2 SEP v.3 correspond to the previous project of modernization SEP v.2. Thus, within the framework of the new project, it is proposed to use the existing corps and tower, armament, power plant, etc. However, some updates of all these units were implied by previous projects of the SEP family.

The first prototype of the tank M1A2 SEP v.3 was built last year. The first public demonstration of this vehicle was held on 12-15 in October last year during the exhibition of the Association of the US Army AUSA 2015. In the pavilion of the exhibition was presented a tank that received a set of new equipment, the most notable element of which, for obvious reasons, was the new combat module. On the side screens of the prototype tank there was a corresponding marking.

Last fall, it was reported that the modernization of existing tanks under the new project should start in the 2016 fiscal year with the delivery of mass-produced vehicles in the 2017. New works on updating the equipment in accordance with the new project will have to stop the implementation of the modernization of the project SEP v.2. For such work in the budget for the 2016 fiscal year 367,9 million dollars were allocated.

According to recent data, the supply of upgraded tanks were significantly shifted in time. In the meantime, the contracting company has assembled several experienced tanks and is conducting tests. According to foreign press reports, to date, the company General Dynamics Land Systems (GDLS) built seven prototypes of the nine required. These machines have already been handed over to the customer and are now being tested at Hume and Aberdeen test sites. 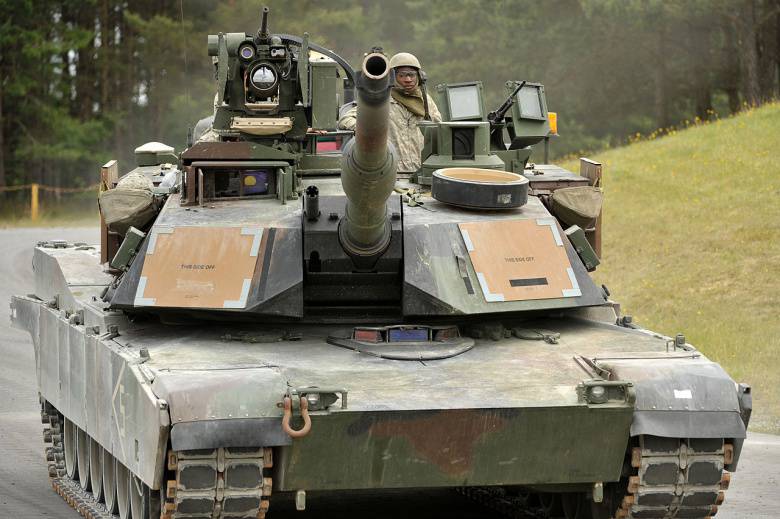 It is reported that the tests started at the very beginning of the 2015 and will continue until the spring of the 2020 of the fiscal year. GDLS representatives say that the prototypes are being tested and show themselves well in the conditions of the landfill. The commencement of full operation of the newly upgraded equipment by the army is scheduled for the third quarter of the 2020 fiscal year.

To date, General Dynamics Land Systems has been awarded a contract to upgrade several pre-production samples. After the deliveries, the prototypes will be upgraded and six pre-production tanks will be delivered to the customer in the M1A2 SEP v.3 configuration. Full-fledged serial upgrading of existing equipment will begin no earlier than the end of the current decade. In the plans of the Pentagon there is an update of the entire existing fleet of main tanks M1A2 SEP v.2 in the number of 1593 units.

The next project to upgrade the main tanks M1A2 Abrams involves the use of a number of new systems, including new ones for such equipment, as well as the addition of the existing range of ammunition with new products. It is assumed that such an upgrade of existing equipment will increase its survivability and firepower on the battlefield, as well as improve the basic parameters of search and target detection. Separately, in this context, we should consider a combat module with machine-gun armament, which can be used to combat tank-dangerous targets or as an additional means of monitoring the situation.

According to the latest reports, in the near future, GDLS should complete the delivery of nine pilot tanks, after which the order for upgrading pre-production vehicles will begin. Only then can a full and massive upgrade of the equipment used in the army begin. In total, the new equipment and the latest shells will be able to get up to 1600 tanks, previously upgraded from previous projects. Nevertheless, the first cars from this number will be sent for modernization only in a few years.