9 2016 June
73
If we compare the publications of the foreign press of today with the publications of at least 3 a year ago, then the difference is obvious. The major foreign media and the media trying to be in their trend lower and much lower, vied with materials and reports that the Russian army is an inflated colossus with feet of clay, that the Russian defense industry is breathing its last and finally drowned in bribery, and the military Russian machinery is rusting trash, the exploitation of which is a risk to life in the first and only place for those who exploit it. Some passages of a similar nature were replaced by others, the din in the Western media stood as in a real stable, but suddenly ... silence ... and obvious bewilderment.


The first thing that made the partners, forgive, shut up, were the frames with the very polite people who gave the Crimeans and the residents of Sevastopol the opportunity to say their weighty words in the referendum, reducing the threat from the Maidan radicals to zero. As soon as over the hill they saw well-equipped and armed Russian servicemen on the screens of their televisions and gadgets, they must have immediately started re-reading their own gems “about rusty automats and full of overcoats”.

The second thing that led the “partners” to a real shock was the beginning of the counter-terrorist operation of the Russian Aerospace Forces in Syria. The “flying trash”, as the Russian planes called the western “experts”, suddenly showed what the Aerospace Forces of the Russian Federation really are. Hundreds of destroyed terrorist infrastructure, countless liquidated militants, military vehicles, warehouses with weapons and ammunition. At the same time, the transfer of a strategic initiative from the hands of the ISIL and Dzhebhat an-Nusra militants to the hands of the Syrian government army, which has rekindled its spirit.

Caliber cruise missiles, precision aviation ammunition, the use of the S-400 anti-aircraft missile system for covering the Khmeimim air base, the operation of the Pantsir-S1 anti-aircraft missile and cannon systems, the use of the latest Su-35 multi-role fighters in the Syrian sky. And also: the use of strategic bombers, unmanned aerial vehicles, new models of army aviation, radar systems, electronic jamming. - The actual ability to conduct effective combat operations using any type of weapon and without any loud exclamations about an entire army of allies. As one of the most spectacular and effective operations - assistance in the liberation of Palmyra by the Syrian army.

Frankly, it should be noted that, even before the events described, not all foreign “partners” were skeptical about the weapons produced by Russia. Quite a few remained and remain who actually invest billions of dollars in the Russian defense industry, acquiring weapons and military equipment from manufacturers of the Russian Federation. Take India at least.

However, the events in the Crimea and Syria forced even the people who were an ardent supporter of the mantra on the “colossus on clay legs” and the “technological pit of the Russian defense industry” mate to turn over the turnips. About how Russia has strengthened its position as one of the leading exporters of weapons in the world, recently General Director of Rostec Corporation Igor Chemezov said. In an interview with the publication "Kommersant-Vlast" The head of Rostec told about the export growth that has been noted in recent years.

As a comparison - a few important numbers. In 2000, the volume of arms exports to Russia was approximately 2,9 billion dollars. At the same time, the package of orders from the “defense industry” of the country barely reached 6,5 billion. Today, Russia sells arms and military equipment worth about $ 15 billion. The total package of orders for Rosoboronexport has reached an absolute record for the entire history its existence - 48 billion dollars. At the same time, it is noted that today the dollar component is almost completely absent in terms of Russian arms exports.

In connection with the action of anti-Russian sanctions imposed by the United States, the purchase of military equipment and weapons from Russian manufacturers is carried out either in national currency or in euro, so that later on American structures that are Washington’s tool for eliminating competitors could not use the US judicial machine for the next fabricated case. After all, as is well known, the American court extends its jurisdiction (according to American laws) to any territory of the planet Earth, where the transaction took place when paying using the US currency. In other words, if country N acquired weapons for gray-green paper from Russia, then the United States could consider this as an argument for launching repressive measures against companies that participated in the deal, with subsequent probable arrests of their representatives anywhere in the world (a package of prison cell in Guam ...). Nothing personal, just business ... Eliminating competitors at all costs. The move by Rosoboronexport with the refusal of dollar deals clearly brings the “partners” from the United States to a white-hot, because any non-dollar transaction is also a small step towards refusing to service the US 18-trillion national debt.

The growth in arms exports from Russia allows the state to consider the possibility of refusing to sell certain types of weapons abroad. If the same US is ready, excuse me, injecting the "raw" F-35 into "partners", without actually starting their full-fledged operation at home, then Russia decides not to drive the horses. And not because the armaments are “raw” and “non-rolled”, but exactly because on the contrary - the individual samples are too good and effective.

This, for example, is about the Iskander operational-tactical complex. More precisely, about his version of "Iskander-E", which was originally planned to be exported. Saudi Arabia expresses a clear interest in acquiring it, but Russia, referring to the prohibitive list of offensive weapons, says Riyadh: “no”. And not only, it should be noted, the Saudis. It is also about Syria, whose president (Bashar Asad) has long declared its readiness to acquire Iskander-E. 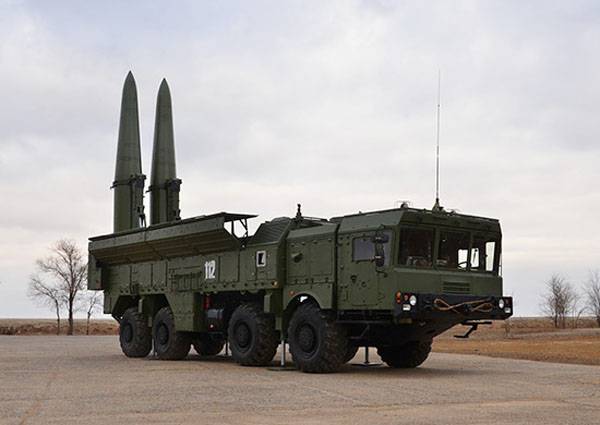 Why does Russia refuse? First, you need to have a promising ground in terms of similar complexes with even more outstanding characteristics themselves. Secondly, complex negotiation processes are possible, during which it is discussed that selling Iskander OTRK to the Saudis and Syria is somewhat strange at the same time, and selling separately is even more strange. In the case of the sale of OTRK to Damascus, the surprised people will do in Tel Aviv, with which Moscow is now very warm. In the case of the sale of Iskander-E, Riyadh will have to talk to Damascus and Tehran, which is also warm and warm. Therefore, Solomon’s solution was found - to delay the export sales of Iskander, which will allow not only to create a reserve for Russia itself, but also to stir up interest in the development of the military-technical complex.

For your information:: in terms of arms exports, Russia ranks second in the world, behind the United States, but at the same time reducing the backlog every year.