9 2016 June
7
NATO's regular exercises in the territory of various Eastern European countries are constantly becoming a cause for disputes and the cause of some deterioration in the international situation. In addition, such activities allow to work out the interaction of the armies of several countries, as well as to identify existing problems. As the foreign press reports, during the last maneuvers the NATO servicemen had to face another problem. This time, the normal work of the exercise participants is hindered by the specific logistics situation.

The German issues Süddeutsche Zeitung writes about the problems identified in the article by Daniel Broessler “Nato stößt auf Barrieren aus Papier” (“NATO is facing paper barriers”) published on 7 June. The author of this material describes the current situation in Eastern Europe, and also addresses the problem of troop logistics. As recent exercises conducted by the countries of the North Atlantic Alliance show, there are serious problems in this area related to bureaucracy and infrastructure.

At the beginning of his article, the author of the German edition notes that joint NATO exercises in Eastern Europe have already become commonplace. Long columns of military, automotive and special equipment with personnel move eastward to take part in regular exercises. On Tuesday, 7 June, joint exercises of several NATO countries codenamed Anaconda 2016 started at Polish training grounds. At several training grounds in the north of Poland, soldiers from several NATO countries, including the United States and Germany, will have to work out the interaction in a hypothetical crisis scenario in the Baltic region. The exercises involved 31 thous. Military and 2920 units of military equipment. 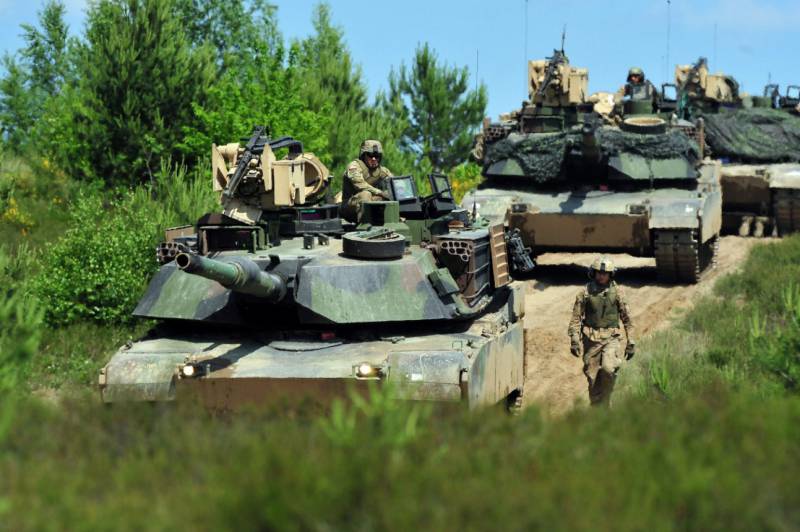 Techniques of various types should appear at the training site in the first place, which is expected to be associated with some logistical problems. As it turned out, Tanks and other machines do not receive the "green light" even in terms of partnership in the North Atlantic Alliance.

D. Broessler recalls the actions of NATO, following the entry of the Crimea into Russia and the beginning of the war in eastern Ukraine. NATO in general and the United States in particular reacted to these events by updating their plans and concepts. So, it was decided to “play it safe” and pay special attention to the security of the countries of Eastern Europe, primarily the Baltic region. A regular exercise began, in which a number of American soldiers take part. With the help of these activities it is planned to provide a response to possible threats.

In early July, at the upcoming NATO summit, it is planned to take another important decision concerning the security of the Baltic states. In Lithuania, Latvia, Estonia, as well as in Poland, it is proposed to additionally deploy a battalion of Alliance forces that can strengthen the existing armed forces.

It is noted that to date, NATO member countries have been able to solve the main legal problems. There were some difficulties related primarily to the main agreements between NATO and Russia. However, after the organization’s summit held in 2014 in Wales, most of the legal problems were resolved.

During the year after the last summit, the countries of the North Atlantic Alliance adjusted their legislation in accordance with the new requirements. Now, in the event of a crisis, the NATO command can, in the shortest possible time, obtain all the permits necessary for the passage of aircraft and the passage of ground forces. Together, countries have been able to achieve a lot and provide a significant simplification and acceleration of the necessary work.

An unnamed NATO official notes that previously, for the transfer of troops from Spain to the Baltic States, it was just a horrible amount of documents. Now transit permits are not so serious a problem.

However, the problem of permits for passage and passage has not yet been completely resolved. While some countries have simplified such a bureaucracy, other states are still unable to fulfill the requirements of NATO. So, for the preparation of the necessary documents and the passage of troops through the territory of the Czech Republic, according to estimates of NATO experts, it may take about 30 days. In this regard, the American commanders are increasingly making a proposal to create a "Schengen military zone."

NATO officials, despite the problems, urge not to panic. The time required for obtaining permits should not be considered as a delay. Alliance command respects the requirements of the partner countries concerning the transport of equipment and personnel. In addition, even paperwork is an additional way to prepare for a possible conflict: in such a situation, the military get the opportunity to examine in practice the existing situation regarding numerous permits and other documents.

The scenario of the current exercises "Anaconda-2016" implies counteraction against the conditional enemy who captured the conditional state Arnland and attacks the Baltic countries. One of the main objectives of these training activities, in addition to direct combat training at the test sites, is to work out the interaction of military and civilian structures, including in obtaining permits, etc.

D. Broessler believes that the most serious problem for NATO troops in the context of operations in Eastern Europe is currently the state of the infrastructure. By the end of the Cold War, the NATO military had the necessary information and knew which roads and bridges could be used to transport various equipment and troops. Later, the amount of such information was sharply reduced. An additional challenge for military logistics has been the privatization of railways in several countries.

First of all, NATO experts responsible for planning exercises do not have enough data on usable roads and railways, information about the condition of bridges and the dimensions of tunnels. New member countries of the organization conveyed such information only partially, which seriously complicates the planning of troop movement. To solve this problem, several special commissions were formed, consisting of representatives of the NATO command and member states. At present, these commissions work independently in the field and collect all the necessary information. They are expected to complete the main work before the upcoming NATO summit.

Recent reports show that the North Atlantic Alliance, which is increasing its activity in Eastern Europe, has to face new challenges. Thus, according to the German edition of the Süddeutsche Zeitung, in preparation for the latest activities, serious difficulties were identified with obtaining permits and the transfer of troops.

Recently, some successes have been achieved, to some extent facilitating the process of troop movement. Nevertheless, some bureaucratic barriers still hinder the implementation of the plans. Because of them, individual units may arrive in the specified area with a serious delay in days or even weeks.

Another interesting problem was the serious deterioration of the situation with data on transport lines. The data that NATO had during the Cold War years was outdated long ago, and new members of the organization, for whatever reason, have not yet provided relevant information. As a result, the Alliance command has to independently organize special “expeditions”, which must collect information about the transport infrastructure facilities.

Recent ones news NATO logistics look extremely interesting, and from certain points of view it is even surprising or comical. It turns out that the most powerful military-political union has a lot of problems associated with the bureaucracy and transport infrastructure. All this seriously worsens the strategic mobility of troops, and also negatively affects their combat capability and the potential for combat work in remote areas.

Nevertheless, one should not forget that such problems have already been identified, and to date, certain measures have been taken to eliminate them. Thus, in the foreseeable future, NATO is fully capable of solving the remaining tasks and bringing the speed of troop movement to maximum values ​​by eliminating the latest bureaucratic barriers and updating logistical plans with the help of up-to-date information on infrastructure.

This means that in just a few years, NATO will be able to transfer large groups of troops with equipment to significant distances within Europe, with corresponding consequences for the military and political situation in the region. As a result, it is necessary to develop new measures aimed at containing such potential, which can also be used against Russia.