9 2016 June
5
Fethullah Gülen (Hocaefendi) Fethullah Gulen (Khojaefendi) (Erzurum Province, born 1941) is a Turkish writer and preacher. The works of Fethullah Gülen on Islamic studies, theories of social organization and social dialogue are actively published by Western (primarily American) publishing houses. It offers a modern interpretation of canonical Islam with the introduction of the ideology of links between science and religion. He is one of the ideologists of the theory of harmony between Islam and democracy. An active supporter of Turkey's entry into the European Union. The ideologist of the “Ottomanization” of the Kurds (the actual assimilation of the Kurds with the Turkish population) in order to solve the acute issue of Turkish Kurdistan. The education of pro-Turkish (moderately Islamic) Kurdish elites in the schools of Fethullah Gülen was also supported by official Ankara. 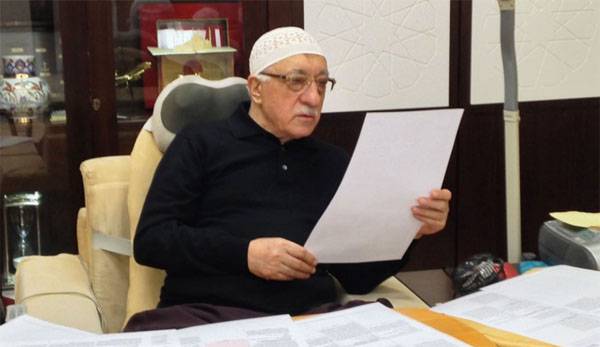 Not without taking into account the advice of Gulen Erdogan, trying to overcome his own arrogance, at one time decided on a truce with the Kurdish forces, including the Workers' Party of Kurdistan. Erdogan was actually able to convince that the Kurdish question would disappear forever from the agenda in Turkey if the Kurds permanently disappear as a special ethnic group, the number of which today (in Turkish territory reaches 18 million people). And they will disappear not by the method that official Ankara is trying to implant with fire and sword in the Kurdish provinces today, but with the help of the aforementioned "ottomanization".

And the process started and even more or less developed. However, it was not possible to fully develop the idea of ​​Gullen, the reason for which was Erdogan’s transcendental personal political ambitions. Perceiving the term "ottomanization" too literally, Erdogan decided to concentrate power in Turkey in his own hands. Whether it is the spirit of Ottoman imperialism or a search of Erdogan’s stupidity and vanity is not so important today. It is important that the concentration of power in his own hands pushed “the main Turk of our time” (as he considers himself) Recep Tayyip Erdogan with Fethullah Gyullen.

The latter, realizing that Erdogan was flirting with the Sultan and the Caliph, presented information about the presence of corruption schemes in Turkey, the brain center of which is “comrade” Erdogan himself. Has anyone introduced or suggested? - an open question, but after such statements Gülen had to leave Turkey and go to the United States. Attention is drawn to the fact that as soon as Gulen was overseas, leading American publications declared him the most authoritative Islamic scholar in the world. Time magazine in 2013 put Fethullah Gülen among the hundred most influential people in the world. What is important is that while Gulen was journalists "Half" submitted to:

Fethullah Gulen is a Turkish scholar and Islamic preacher.

Gulen is a mysterious man. His influence in his native Turkey is enormous. It is carried out through graduates from its schools who have received key posts in the Turkish government, the judiciary and the police. It makes him look like a shadow puppeteer. And he is despised by about as many Turks as he is supported (loved) by
.

At the same time, American and many other Western publications wrote about Erdogan as a corrupt official, a suppressor of democratic initiatives and a ruler who was tough to authoritarianism.

Ever since then, very active harassment began on the schools of Islamic studies that work in Turkey, as they say, on behalf and on behalf of Khojaefendi: police checks, searches, detentions and arrests of preachers. So that all this activity does not look like an unmotivated attempt to settle accounts with a man who accused Erdogan of corruption, the Turkish political leader declared Fethullah Gulen the head of the conspirators who were trying to carry out a coup d'état in Turkey.

To such accusations, Gülen, who once supported Erdogan’s coming to power, from Pennsylvania responded with new accusations against Erdogan himself, stating that he had in fact launched a civil war against the Kurdish population of the country. Moreover, Gülen makes all of her statements in no way in the form to which Erdogan got used - no sharpness, no outrage, everything is calm, full-fledged and with links to evidence of sources (including the local population of the south-east of the country). His preacher Gulen supplies his comments with numerous quotations from religious sources, which adds to his credibility among moderate Muslim communities in Turkey and not only in Turkey.

With impenetrable calm, Gulen called on Erdogan to restrain his political ambitions for the sake of peace and tranquility on Turkish soil and begin substantive talks with the leaders of the Kurds. Such correspondence advice from Gulen led the Turkish president to another bout of rage, and he allowed himself to state that he questioned the moral and religious foundations by which Gulen and his associates, of whom there are many in Turkey, are guided.

From Erdogan's statements about Gulen-Khojaendi and his followers:

I doubt their faith

They will be cleared only by hell.

At the same time, the Turkish special services are stepping up with a new force in relation to schools and institutions connected financially and ideologically to Fethullah Gulen and the Hizmet public movement affiliated with him.

The publication reports that the businessman is the head of his own company Dumankaya Holding, which Turkish law enforcement officers suspect of receiving funds from the structures of Gulen to finance activities aimed at overthrowing Erdogan.
During interrogation, the Turkish businessman was asked to clarify the situation with opening a bank account that received funds from foreign countries (in particular, 25 grants through the Bank of Asia from 2008 to 2016).

Did these funds go in the name of the organization that Fethullah Gulen supervises? - Halit Dumankay was asked.

In addition, the Turkish police tried to find out from the businessman about his attitude to the personality of Gülen.

From interrogation materials (only questions from the investigator are presented):
Did you communicate by phone or in person with Fethullah Gyullen?
Have you met any of those who are members of his organization (Hizmet)?
Did you participate in meetings organized by domestic or foreign members of the party structure of Gulen? Have you made visits to representatives of such structures?

In the camp of the organization, supervised by Gulen, the arrest and interrogation of a Turkish businessman was called "witch-hunt." Fundamentally, this material proves the fact that supporters of Fethullah Gulen are under the scrutiny of the Turkish police and special services, after Gulen accused Erdogan of unwillingness to go "along the path of democracy" and "follow cultural and religious values" (dispersal of 2013 demonstration of the year).

One gets the impression that the absentee clash of Gulen and Erdogan is connected with the fact that Erdogan failed that very project of “ottomanizing” the Kurds, following the path of satisfying personal political ambitions.

The arrest of the businessman Dumankaya was not the last.
The numerous arrests of Islamic preachers who spread the Islamic ideology of Fethullah Gülen in Turkey are reported by the Turkish journalist and blogger Bilyal Sahin on the pages of the publication Özgür Düşünce (this edition is often referred to on his Facebook page by Fethullah Gulen himself).

The Bilal Shahin report reports that the Turkish police made arrests of 13 people who donated money for schools close to the Khojaefendi public organization. In some cases, we are talking about donations for the purchase of land for the construction of such schools. Turkish police say that under the guise of Islamic schools in the country recruitment points for terrorists, including representatives of the Kurdistan Workers' Party, which is considered an official Ankara terrorist organization, operate.

Attention is drawn to the fact that the majority of detainees are deep old men (some 80 and older). Thus, 80-year-old preacher Ramazan Keskin was arrested in Antalya. The material states that this person was engaged in charity and helped students, but was accused of involvement in recruiting into terrorist cells.

From the same material Bilyal Sahin:
The former deputy of the Justice and Development Party (Erdogan’s party) from the city of Izmir İlhan İşbilen was detained. When a corruption scandal broke out around the party and its leadership, Ishbilen made a decision to refuse the deputy mandate and leave the party. Some time later, he was arrested and sent to Ankara prison on charges of involvement in terrorism and preparing for a coup d'etat in the country. Ishbilen spent about 4 months in prison, from where he wrote that he was being charged for quitting Erdogan’s party.

And on May 26, Gulen published a statement that “the insane Turkish authorities” (this is a quote) are preparing to stop any activity to which the above-mentioned Hizmet movement and he himself personally are concerned. According to the preacher, who is in the USA, Erdogan “buries” Islamic canons and democratic values.

Considering the fact that the American press did not reduce the level of piety towards Gülen and the fact that at the request of Ankara, the US authorities are not going to deport Gülen to Turkey, we can say that both he and his enormous religious and political ties in the Middle East, is a tool for Washington. This tool is used with the aim that Erdogan finally does not believe in his sultan's infallibility and does not even think of bashing against the United States.

Ctrl Enter
Noticed oshЫbku Highlight text and press. Ctrl + Enter
We are
Turkish decomposed. Preacher Gulen, "parallel structures" and attempted coupTurkey against the Kurds. Is there a new phase of conflict ahead?
Military Reviewin Yandex News
Military Reviewin Google News
5 comments
Information
Dear reader, to leave comments on the publication, you must sign in.