Exciting NATO allies with the myth of the Russian threat, the United States is in fact upholding a unipolar world.

9 2016 June
20
In an interview with the Opinion program, Russia's permanent representative to NATO, Alexander Grushko, said on Monday: “The fact that Russia poses a threat to NATO is simply a myth that makes it possible to carry out the policy that NATO implements and solve other strategic tasks along the way” . The diplomat assessed these tasks as follows: the Americans regard the threat as “an additional hoop that should strengthen the unity of the West.” 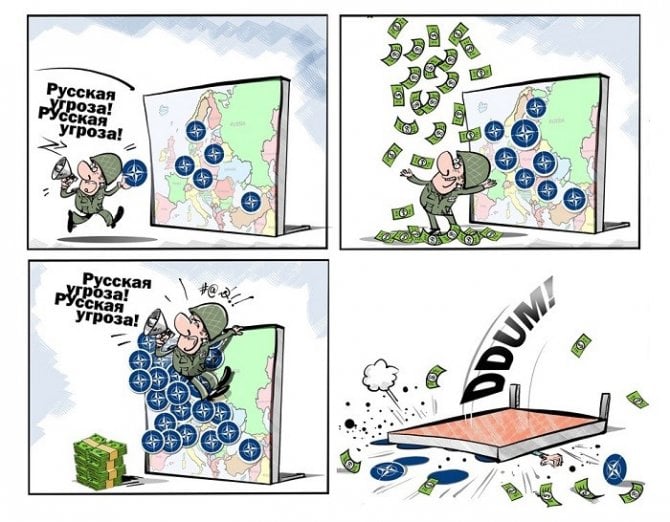 Europeans lined up in the wake of American politics

Strictly speaking, the unity of the West should be understood as the unquestioning obedience of American allies to the interests and policy of the United States. A typical example of this was история with the "White Book", which was prepared by the Ministry of Defense of Germany. In its new strategic document, Germany transferred Russia from partners to the rank of rivals representing a real threat.

The German media, citing the approval of the White Book by the Bundestag, reported on a new German political strategy as a fait accompli. In this regard, representatives of the Russian authorities expressed their serious concern to Berlin with the new German approach to bilateral relations. And spun.

German Ambassador to Russia Rüdiger von Fritsch called on everyone not to pay attention to the information of the German media about the “White Book” of Germany, in which Russia is declared to be a rival, not a partner. Von Fritsch called publications in the German editions propaganda. “This is only speculation, the document has not yet been published,” the ambassador said, but recalled that NATO appears in the Russian military strategy as an adversary, and Germany is part of NATO.

With such a refutation made and the Minister of Defense of Germany Ursula von der Lyayen. Only her interpretation is different from the words of the ambassador. Von der Lyayen also believes that the media did not accurately state the content of the White Paper in terms of the Russian threat, but she noted that at NATO, Russia is now considered not a partner, but a rival, and Germany is part of NATO.

Behind this verbal balancing act, it was left in the shadows that a new “White Book” was being prepared for almost two years. During this time, many closed and open discussions of its strategic tasks took place. 24 passed the final agreement on May, when, after disputes, the wishes of the Social Democrats included in the ruling coalition were heeded. Then there was the Bundestag. So there is no big secret about the content of the book. It was just that the Germans were alarmed by the reaction of Moscow, which noted in connection with the new strategy of the White Book the prospects of German-Russian "rivalry" not only in politics and the military field, but also in the economy.

The loss of the Russian market of the Germans worried. However, Germany, even contrary to its national interests, cannot retreat from the demand of the United States to recognize Russia as an enemy and strengthen NATO’s eastern flank because of the allegedly increased Russian threat. Therefore, Berlin is forced today to clumsily maneuver so as not to cause the outright anger of the Americans.

Permanent Representative Alexander Grushko spoke more than once about who really bears the threat to the continent. He already cited the real balance of the forces of the North Atlantic alliance and Russia. According to Grushko, NATO surpasses us in all types of weapons 5-7 times.

Here is a fresh private example. These days from the North fleet A new Russian diesel-electric submarine Stary Oskol is making the transition to a permanent base in Novorossiysk. In the North Sea, it was accompanied by the Dutch missile frigate Tromp.

There are four such ships in the Netherlands Navy. We have a frigate of this class (albeit with a slightly different quality of weapons), only one — the Admiral Gorshkov. He has not yet joined the fleet. Depends on months of testing in the Northern Fleet. But the ship is built. We assume that. It turns out that we are only four times behind the Netherlands on new missile frigates. Such is the illustration of the "Russian threat".


How the continent turned into a landfill


NATO military know this picture better than us. But the Americans created the myth, determined the military and political strategy, and it must be followed. For this, the Europeans, as they say, were driven into landfills. These days military exercises are taking place in the Baltic Sea, Poland, Lithuania, Estonia, Latvia, Scandinavian countries. It is noteworthy that the military is now taking part in the maneuvers of countries outside the North Atlantic Alliance.

The Polish-Lithuanian military brigade makes its debut on Polish training grounds as part of the large-scale Anaconda exercises. It was created in January of this year, and is now being tested on full-fledged NATO maneuvers. In addition, the units of the Finnish and neutral Sweden armies are involved in the exercises.

There were no oddies. Topnews There was information about how a brown bear broke up brave warriors at the number up to three thousand at the Finnish training ground. Brute ate an army dinner, cut off the equipment thrown in a panic. The unlucky bear is eventually shot down. Bear won. True, not the mythical and frightening of all Russian, but the most genuine Finnish.

Less known is another episode of Finnish teachings. During the night landing of the military on the island of Kamsholmen located in 20 kilometers from the Finnish capital of Helsinki, a local resident took the landing for a real invasion. As the newspaper Ilta-Sanomat told, late in the evening a big boat arrived at the summer residence of the islander's house, Bjarne Vinberg. From it landed a detachment of people dressed in military uniforms.

According to Winberg, unknown military men with large backpacks and objects resembling weaponheaded to a nearby forest. “I was very scared,” Bjarne Vinberg told Ilta-Sanomat reporters. He quietly jumped into his boat and quickly left the island, calling for rescue on the way.

This case didn’t just add to the textbook about the suicide of the American minister with a shout “Russians are coming!”. He showed that the military psychosis about the Russian threat had already entered the minds of Europeans. But NATO, defying military muscles, continues to strain its allies even more.

June on the scale of military maneuvers near the borders of Russia surpassed even the times of the “cold war”. Here are some recent facts: the Anaconda exercises already mentioned in Poland. 31 is a thousand soldiers from 24 countries. The largest contingents exhibited Poland and the United States - respectively 12 and 10 thousands of soldiers. At their disposal 3 thousand units of armored vehicles, more than a hundred combat aircraft and helicopters, 12 combat ships.

They are coming from May 27 and will continue until the end of June, the annual exercises in the Baltic States Saber strike (“Sword strike”). On June 6, the Lithuanian phase of these exercises, the Iron Wolf, began. According to the press service of the Ministry of Defense of Lithuania, over 5 thousand troops from Lithuania, the USA, Poland, Luxembourg, France and Germany take part in the maneuvers. German equipment used in exercises Tanks "Leopard" and American strategic bombers B-52.

As part of the exercises in the Baltic countries, the march of US armored vehicles Dragoon Ride-II took place. Already at its first stage, 200 units of military equipment of the 2 Cavalry Regiment of the US Army were advanced - Stryker infantry fighting vehicles, military off-road vehicles and heavy vehicles. By the way, in Daugavpils on the side of the road for the meeting of the column prepared a poster: “NATO you are killers. Yankee go home! ”(“ NATO, you are killers. Yankees, go home! ”). The Latvian police are now in a hurry looking for the initiators of this protest act.


In the neighboring Estonia, in the military town of Tapa, there are international military exercises Saber Knight (“Beat the Knight”) with the participation of military personnel from Denmark, Latvia, Lithuania, Estonia, the United States and Great Britain. June 13 will take their stage of the Saber strike exercise here. It should be recalled that in early May, Estonia had already conducted the most ambitious NATO military maneuvers in the entire recent history of the country, Spring storm (“Spring Storm”).

It is clear that all these armies are commanded by the Americans. Their interest was marked by analyst, former consultant to the US Republican Party, James Getras. He believes that the exercises with the participation of the US Army in the Baltic States are fueling military hysteria and demonstrate the weakness of the United States itself.

“We are increasingly seeing Europe begin to separate its foreign policy from American directives, and this confuses Americans: our control over security in Europe is weakening,” Jetras told RT in an interview. So the US decided to "build" Europeans, exhausted by their endless teachings and maneuvers. And the world again to present themselves as the main and only center of power on the planet.

These ambitions of a weakening superpower are not so harmless. Excessive military activity may well provoke a real conflict. Do they understand this in Europe, dutifully following irresponsible American politics? ..