9 2016 June
139
In Venezuela, more than 1,3 million signatures were recognized as valid in support of the application for a referendum on the early termination of the authority of Nicolas Maduro. This was stated by the executive secretary of the opposition Bloc of democratic unity. He also noted that the opposition has “six times more signatures than necessary.” 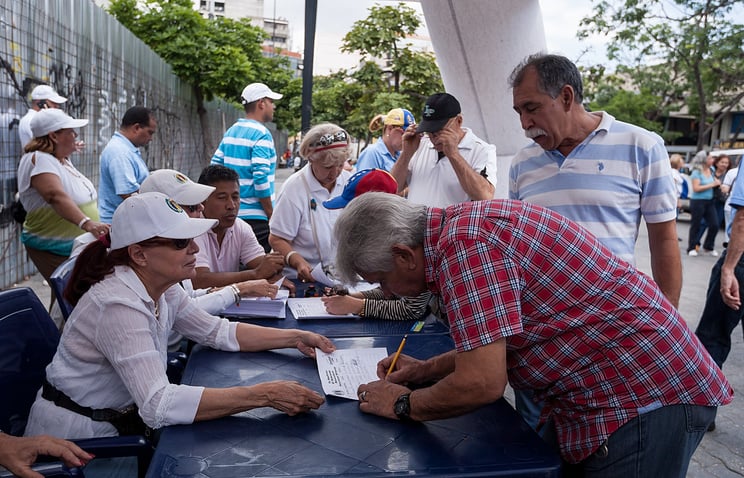 The Executive Secretary of the Opposition Bloc of Democratic Unity (BDE), Jesús Torrealba, after a meeting with representatives of the National Electoral Council, told the press: “We have signatures. We have six times more signatures than we need to start a referendum, to overcome this border in 1% and go on to collect signatures for 20% voters. ”

The agency indicates that the start of the passed stage of preparation for the referendum of the opposition needed 195 signatures of thousands of voters. Now they will need the support of as many as four million people. And if political opponents of President Maduro succeed in achieving their goal in July, a nationwide vote on the resignation of the head of state can take place, according to some estimates, in October 2016 of the year.

TASS recalls that, as a result of the parliamentary elections in December last year, the United Socialist Party of Venezuela, headed by Maduro, was defeated. Against the background of popular discontent, oppositionists for the first time in the last seventeen years gained control of the National Assembly.

Euronews also reports that on Tuesday, police in Caracas broke up a demonstration in support of the referendum.

One of the protesters, against whom the guards used tear gas, told the journalist with indignation: “I am a citizen of Venezuela, I put my signature on the demand for a referendum. And I demand respect for my rights. What it is? The police does not let us through. And we are starving. There are no products in the stores, only the queues. And I have two children! ”

Why does Venezuela live so badly today?

This was recently told in the journal "Forbes" Venezuelan citizen Enri José Machuca Navarro, an expert in international relations and the oil business.

Here it is, the beautiful Venezuela: the world's largest oil reserves, the eighth place in the world in gas reserves, the richest amount of resources of gold, strategic metals, etc. Despite this, the Bolivarian Republic of Venezuela is inferior to regional competitors in terms of GDP growth, and occupies the highest line (non-honorable) in the ranking of Latin American countries.

There is also a political split: the opposition argues that the state is ruled by totalitarianism, and the problem of food shortages is the result of the economic policy of the “chavista”; the government of Maduro accuses the opposition and the United States of sabotage.

The expert cites some essential data.

Firstly, the country's economy depends on the energy sector: since 1945, the Dutch disease has become one of its components, and in 2015, the share of energy resources in exports reached 96,4%! Bottom line: the life of Venezuelans is not just dependent on world oil prices, but highly dependent. Here is the dependency in numbers: oil revenues for January 2016 amounted to 77 million, while for the same period 2010 of the year they were at the level of 3,3 billion dollars. "The total decline in the country's income over six years was 4200%," specialist. “This unrealistic amount of money that Venezuela is not receiving now makes it very difficult to ensure government spending.”

Secondly, exorbitant social spending. The budget deficit for the 2015 year was approximately 25%. But where to get the money, which is so lacking? .. Over the past fifteen years, the government has directed most of its income to social programs and neglected the accumulation of savings. This significantly distinguishes Venezuela from the economic policy of large net exporters who have learned to compensate for the budget deficit due to accumulated reserves.

Third, the shortage of goods and services in the country is caused not only by inefficient state policies to control market monopolists, but also by the authorities' inability to create new production facilities and stabilize macroeconomic indicators (here the inflexibility of the foreign exchange market and increasing money supply are called).

Fourth, the United States does influence the situation in Venezuela, as President Obama recently decreed that this country threatened the national security of the United States. There is no doubt: Washington is actively involved in the process of destabilizing the country.

Fifth, the political situation in the republic is heating up: the confrontation between the parliament and the government is growing. One recent example: the opposition-minded parliament refuses to execute the decisions of the Supreme Court.

As a result of all this, the opposition proposes today to hold a referendum on the removal of authority from Maduro. This could lead to the formation of a new government with a new economic development program.

The expert does not want to predict the future of Venezuela, because it does not undertake to "guess what the exact price of oil will be by the end of the year." One thing is clear: the confrontation between key political players will continue. The quality of life of the population will depend on the ability of the state to work with big business, for which it is necessary to accelerate plans to diversify the economy. It is likely that the government will have to cut budget expenditures or find external borrowing. The latter is quite realistic for the republic, because this country has a reputation as a good borrower. "It remains to be hoped that Venezuela will learn a lesson from the current situation: you cannot live on oil revenues only," Navarro sums up.

We’ll add to the Russian government that it would also be nice to learn the lessons and stop glancing at bars of charts with the price of "black gold" running around the dollar, and think about the diversification of the economy, self-sufficiency and intellectual resources. It is not good for such an intelligent and resource-rich country to turn into a flea market in selling Chinese consumer goods.