Project "ZZ". No history, no money

8 2016 June
154
In "The American Interest" told about the "rewriting" Putin stories Russia, slightly likening the Kremlin to the Orwellian Ministry of Truth. In addition, it is argued that "Putin's manipulations" with history are "a threat to the West." The real history of Russia is deplorable: “Frankfurter Allgemeine Zeitung” reminds that Russian rulers shocked the poor public with passages about lack of money against the background of corruption scandals, and therefore invigorating Medvedev statements like “hold on” look ambiguous. 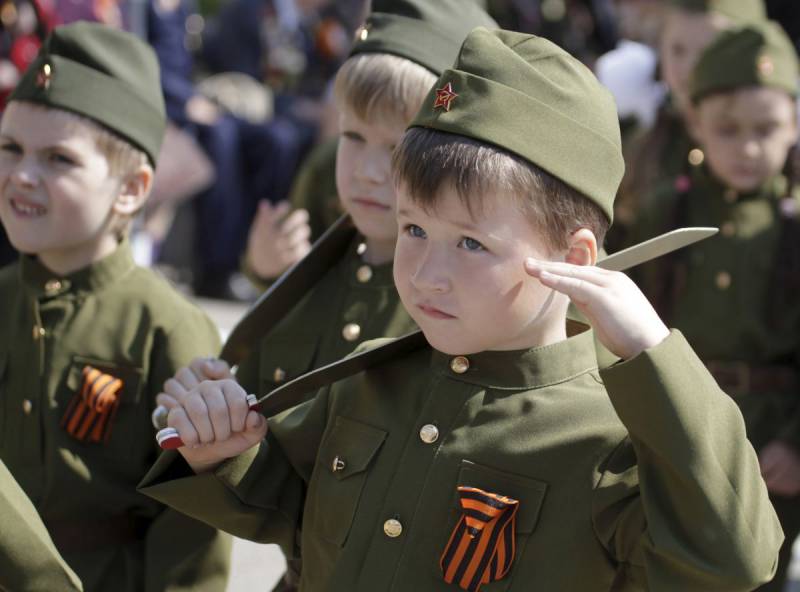 In a rubric under the awesome title "Revisionism" in the journal "The American Interest" An article by Andrew Foxall (Andrew Foxall) was published on how the story in Putin’s Russia is changing for the leader’s authoritarianism.

At the beginning of the material, Andrew Foxall repeats the arguments that have already become standard in the West: over the past two years, the Kremlin “annexed Crimea”, launched a “aggressive war against Ukraine”, intervened “in the Syrian conflict” and even “threatened the security of the Euro-Atlantic region” in various ways. And what's next? Meanwhile, the “situation inside Russia” was getting worse. Economic? No, the author is talking about something else, something else is bad: “the authoritarian regime of President Vladimir Putin strengthened his position”.

Next, the analyst explains his point of view.

Firstly, the following image of Putin is enshrined in Russian society: he is the defender of Russia, and it must be defended because the “predator West” attacks her.

Secondly, the Kremlin is "silently maintained" an atmosphere of intolerance. Enveloped in it, the authorities are attacking "civil liberties." The author is confident that opposition politicians in Russia are “being killed”, that “anti-Western sentiments” have spread around the country, and the deterioration in the economy is accompanied by bravado in the spirit of “a return to traditional values”. This kind of domestic policy led to a split of society: Putin united people "around his regime", and critics found themselves in the camp of "enemies of the state."

And this is where the analyst sees the use of history by the Kremlin as a “political weapons". Moreover, the author does not doubt that: “Undoubtedly,” he writes, “for the past sixteen years of rule, Putin used history, turning it into a tool of self-affirmation ...” Putin needed this to preserve the existing political system.

Next, the analyst goes to the West.

The fact is that the “manipulations with history” produced by Putin constitute a “threat to the West”, and even “growing”: they reinforce the confrontational component in Moscow’s foreign policy and nourish “anti-Western sentiments” in Russian society.

Andrew Foxall believes that Putin "cultivates conservatism," in which the USSR’s victory over Nazism is of key importance to ideology. Here the author discovers the “myths” that the Russian authorities “actively support”.

The most common of these "myths" were assurances that it was the USSR that had defeated Nazism, protecting Europe from it. Any doubts about this version of history are viewed by the Kremlin as a threat to the authorities. In particular, Foxall recalls the recent history of the letter of the Minister of Culture Mr. Medina to Mr. Mironenko, the head of the State Archives. Medinsky hinted that Mironenko might show “a desire to change his profession,” the authorities would understand that. In March, Mr. Mironenko was fired. The creators of the film about the Panfilov heroes in Russia do not want to pay attention to new historical data. Medinsky, in 2013, published the book “War: Myths of the USSR” and believes that the story begins “not with facts, but with interpretations” (“According to Medinsky, published in 2013 ), history begins “with interpretations but with interpretations.” ”).

(In fact, S. Mironenko, Director of the State Archives, was removed from the position of director, but not “dismissed” in general: now his position called "Scientific director of the archive." He spoke about this himself. “He asked for it himself, the desire wrote something so that he could concentrate on scientific work. We will even try not to limit his salary, ”- explained 16 March press head of the Federal Archival Agency Andrei Artizov. - O. Ch.)

In the end, I am convinced Foxall, "a distorted interpretation of history," which the Kremlin gives the people, is designed to unite society around the "idealized past." At the same time, historical distortions lend "legal force to aggressive foreign policy" no longer in the past, but in the present.

The analyst believes that the Kremlin, having subordinated the media and politicians, has already prepared the ground for historical revisionism. To rewrite history is what the Kremlin intended. And the state is the “sole guardian” of people's memory. That is Putin’s point of view. From here, it takes the origins and convocation of the commission on “historical truth” on the eve of the 65 anniversary of the victory in the Great Patriotic War. She supposedly must fight historical falsifications. And in 2015, V. Putin initiated the unification of history textbooks. All this leads to the “canon” of history prescribed by the state.

The author hints at Putin’s plan orulizm. He writes that by “falsifying” the history of the Kremlin means that it contradicts the official version today and its interpretation, from which tomorrow's may differ.

The West should respond to Putin by initiating “educational programs” in Russia. They should condemn the Kremlin’s attempts to “manipulate history” and clearly define the role of Russia and the USSR in history. Russia's attempts to "monopoly" to ascribe to itself victory in World War II are unacceptable, they should be "rejected". For this, the West needs to support research on archival materials stored in Russian repositories.

In Russia, many people take at face value "the Kremlin's manipulation of history." You can not leave it without attention, says Foxall.

Western media have told about the real history of modern Russia. She, apparently, is pitiable.

Frederick Schmidt in «Frankfurter Allgemeine Zeitung» notes that the Russian rulers shocked the poor public with passages about the lack of money against the background of corruption scandals, and therefore invigorating Medvedev statements like “hold on” look ambiguous.

The author recalls the recent scandalous statement in the Crimea, Prime Minister Dmitry Medvedev, where the latter appeared "in a not very favorable light." In Feodosia, the Russian ruler stumbled upon an angry pensioner who complained about the size of her pension - 8 thousand rubles. And the prices are “mad”, retired remarked. The response from Medvedev contained a message that “there is simply no money” and an indication “to stick here,” reminds the journalist.

It is curious that the authorities of Sevastopol regarded the issue of pensions as a “targeted provocation”. Friedrich Schmidt writes that with the help of such a simple formula of reaction, the Russian authorities are shifting responsibility for the problems "to the enemies" who allegedly attack Russia "both inside and outside."

No wonder the Kremlin declared "provocations" and the machinations of the West and the publication of offshore accounts of representatives of the elite of Russia. Putin said for a reason that the Panamanian dossier is an information product designed to “destabilize the situation” in Russia. Schmidt himself thinks that publications about all these accounts explain precisely why there is “no money for indexation of pensions” in Russia.

Western analysts believe that Russia is not all right, not only with the past day, but with today. The Kremlin, in the manner of the Orwellian Ministry of Truth, is busy "rewriting" history to please the "official" point of view and diligently "idealizes the past."

Why exactly the past? Undoubtedly, there is no propaganda novelty in that: the same Orwell historical workers also alter the old newspapers. In Russia, this is done for the same reason: life in the present is poor and difficult, it is not for nothing that the Russian prime minister advises the people to “hold on”, because “there is no money”.

Western analysts, though, ridicule Medvedev, whose statements are indeed worthy of the feuilletonist pen, but the Kremlin’s “historical” approach plunges them into depression. The “manipulations with history” produced by Putin constitute a “threat to the West” because they feed “anti-Western sentiments” in Russian society.

It is strange that analysts did not even mention the word “sanctions” in their articles once. From scratch, "anti-Western sentiment" does not arise, as much as Putin or his ministers are talking about this. At least one reason, yes should be. If Western states, clearly headed by the United States, have decided to strangle Russia with restrictive measures, they will not be considered “friends” in Russia. The West can repeat as much as it wants that sanctions are directed against the authorities, they will still somehow be beating up on the welfare of the people.

As for corruption in power and “no money”, then yes, such phenomena exist in Russia. Just like they exist in the West. They exist wherever there is state power.

Ctrl Enter
Noticed oshЫbku Highlight text and press. Ctrl + Enter
We are
The Germans declared themselves as political opponents of RussiaRrrevolution! We are rrrevolutionaries! ("Frankfurter Allgemeine Zeitung", Germany)
Military Reviewin Yandex News
Military Reviewin Google News
154 comments
Information
Dear reader, to leave comments on the publication, you must sign in.