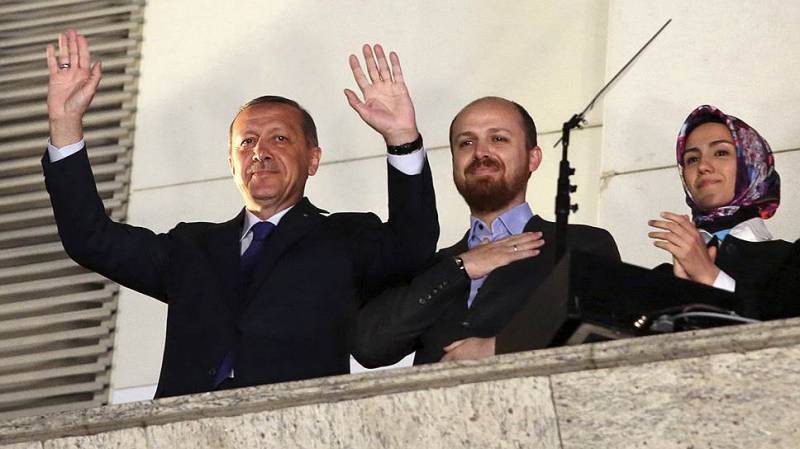 The hero of the famous Russian comedies Stepanych, who was noted for incredible and amusing adventures in Spain, Mexico and Thailand, did not stand next to Bilal, the son of Turkish President Recep Erdogan, who made me watch all of Italy intensely ...

For the whole world, it is no longer a secret that Turkish President Recep Tayyip Erdogan in his struggle for the revival of the Ottoman Empire actively supports the so-called "Islamic State" banned in Russia. So, the daughter of Erdogan - Sumiye Erdogan is the owner of the “secret military hospital” “Covert”, where militants of the terrorist organization “Islamic State” are being treated *.

With the consent of the Turkish president himself, the Turkish intelligence instructors are preparing ISIL militants * on the secret base of Konia, while she herself secretly cooperates with the third son of Turkish President Bilal Erdogan and transports the oil seized in Syria and Iraq to Europe and, in particular, Italy

After the numerous media reports of the Erdogan family’s involvement in corruption schemes and links to ISIL, the Turkish President immediately turned to reprisals in the country and conducted a series of arrests of national journalists to hide such information from the national and international community.

In this regard, it is impossible not to be surprised by the blatantly inexplicable calm of European public opinion, which literally watches the rabbit’s igilov contingent approaching the European cities, whose leash is in the safe hands of Recep Erdogan and his family.
So, Bilal "Erdoganich" a few years ago turned his gaze to sunny Italy. And pereahl there with his entire family.

By the way, Bilal together with his brother Mustafa and the president’s son-in-law Ziya Ilgen owns the shipping company BMZ Group. At its disposal are special berths in the ports of Beirut and Ceyhan, from where the smuggled oil “Made in ISIL” * is transported by tankers to consumers in Europe and Asia. Total BMZ Group has ten oil tankers.
Interestingly, Bilal Erdogan does not even particularly hide his ties with the Islamists. Thus, his photographs have recently been published, and bearded men next to him are like two peas in a pod like people who were previously seen on more violent pictures. In particular, with the severed heads of five men.

A few years ago, Bilal Erdoganych officially went to study at the University of Bologna, allegedly, this was a formal reason for changing the place of residence of his and his family. Journalists student status of Erdogan Jr. in the university confirmed.

It was in Bologna, where Bilal "Erdoganich" hoped to complete the study begun in 2007 in the branch of the American University named after J. Hopkins and get a doctoral degree, in February of this year a new scandal broke out.

A member of the Turkish businessmen’s family, Uzan, who was forced to emigrate to France because of harassment by the Turkish president, filed an application with the Bologna Prosecutor’s Office asking for a thorough investigation by Italian law enforcement authorities against Erdoganich.

According to the Italian media, the Uzan family accused him of violating European and, in particular, Italian financial legislation in connection with the information on Bilal Erdogan’s transportation of a large amount of cash to Italy in late September for 2015.

And that's not all: some experts believe that the igilov oil abundantly washed with blood goes both to Italy itself and to other European countries. And Bilal "Erdoganych" just directs these processes.

If this is true, then what are the statements of the US-led anti-Ghilean coalition about an “implacable fight against Islamic terrorism”? By the way, in this case, it is understandable why aviation This coalition, unlike the Russian air forces, almost does not bombard oil fields and channels for the supply of contraband oil in Iraq, Syria and Libya ...

However, the whole family of the Turkish president is somehow connected with ISIS *. Daughter Sumeye patronizes a military hospital located in southeastern Turkey, in лыanlıurfa province. The hospital treats militants IG *.

Active daughter Erdogan in international affairs. She organized a series of actions in defense of the Belgian-Belgian MP Mahinur Ozdemir, who was expelled from the party for denying the Armenian Genocide. Sumeyee personally met with the Belgian consul and demanded the rehabilitation of the “Turkish” deputy.

The powerful clan of Erdoganov openly supports "their" in the heart of a united Europe.

It goes without saying that such large-scale economic and political operations in Europe require the presence of many employees whom the Erdogan family can easily find in the ranks of the Turkish special services and ISIS militants *.

The commercial and political interests of Erdogan’s family members are closely intertwined with the interests of the IG * in the most bizarre way. The political support of Turkey for a long time helps the IG to expand its influence, to seize all the new territories of neighboring countries, and the oil revenues, “laundered” by the Erdogan clan, return back to the insurgents ’treasury, allowing either to continue expansion or to sufficiently resist the Syrian military operations. and the Iraqi army on the ground.

And it is simply surprising, and sometimes inexplicable, why Europe continues to look, with Olympic calmness, as the deadly arms of the Turkish-Igil congress close on its neck ...

ISIS * - prohibited in the Russian Federation