The Great Patriotic War showed the importance of the role of the commanders of fronts and armies.

Tell about fifteen leading military leaders on both sides. Information about the Soviet command is taken in the new 12-volume edition of the Great Patriotic War 1941 – 1945. Information about the German generals is contained in the biographical encyclopedic dictionary of KA Zalessky "Who was who in the Third Reich."

Each of the one and a half dozen representatives of the Soviet high command staff was not even 50 years old. Nine of them during the war were marshals of the Soviet Union: A. M. Vasilevsky, L. A. Govorov, G. K. Zhukov, I. S. Konev, R. Ya. Malinovsky, K. A. Meretskov, K. K Rokossovsky, S. K. Timoshenko, F. I. Tolbukhin. Five had the rank of army general: A. I. Antonov, I. Kh. Baghramyan, F. I. Golikov, A. I. Eremenko, I. D. Chernyakhovsky and one — N. G. Kuznetsov — admiral fleet. The oldest - 49-year-old Eremenko was a deputy, and then commander of a number of fronts. The 47-year-old Tolbukhin is the same. 46-year-old Vasilevsky - first deputy, after a while the chief of the General Staff, then the front commander. Marshals Govorov, Konev and Meretskov started the war at 44, Zhukov and Rokossovsky at 45. Chernyakhovsky was 35, Kuznetsov was 37 years old.

Soviet commanders fully used the advantages of youth: the ability to quickly acquire professional knowledge, performance, the ability to instantly respond to changing situations and find non-standard solutions, accumulate the experience of the enemy and oppose him with innovative options.

Age has affected the formation of military leaders. German commanders, almost all who came from the hereditary military, graduated from the Academy before the First World War, in 1907 – 1914. Soviet military leaders graduated from various military academies after the First World War and the Civil War, in 1927 – 1937. Academic education did not have two of them - Zhukov and Rokossovsky. But thanks to the independent permanent work and exceptional abilities, they thoroughly mastered the military theory.

Before the fascist aggression, Soviet commanders did not have combat experience in modern wars. The experience of Wehrmacht operations in Europe in 1939 – 1941 was not analyzed. The nature of the Winter War with Finland was studied very superficially, in which many miscalculations in the actions of the Red Army were manifested. No serious conclusions were made then. A significant part of the national command, especially the higher circles, remained captive to the experience of the First World War and the Civil War. 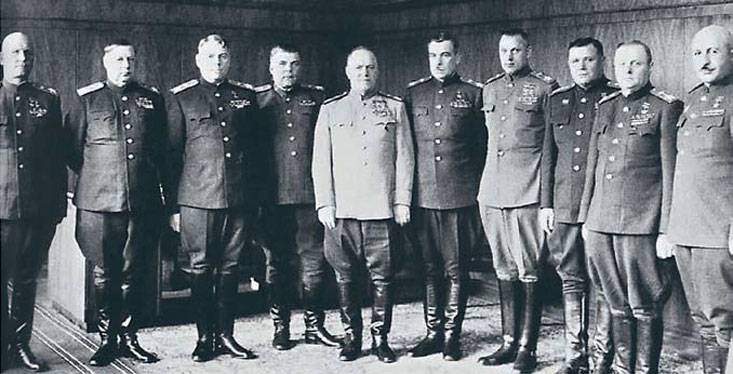 From left to right: Marshals of the Soviet Union I. S. Konev, F. I. Tolbukhin, A. M. Vasilevsky, R. Ya. Malinovsky, G. K. Zhukov, L. A. Govorov, K. K. Rokossovsky, Army General A.I. Yeremenko, Marshal of the Soviet Union K.A. Meretskov, Army General I. Kh. Bagramyan. Moscow. June 1945 of the year
At first, our commanders were inferior to German in professional terms. The commanders of the five fronts created on the first day of the war (Northern, Northwestern, Western, Southwestern and Southern) - M.M. Popov, F.I. Kuznetsov, D.G. Pavlov, M.P. Kirponos and I. V. Tyulenev - did not cope with their tasks. They were unable to reasonably organize the defense, lost control of the troops, showed confusion.

Commander of the Western Front Army General Pavlov in Spain commanded tank brigade, then followed by rapid promotion: head of the Armored Directorate of the Red Army, from 1940 - commander of the Western Special Military District. And a year later war broke out with a little. And 44 divisions were immediately subordinate to him. The commander of the Southwestern Front, Colonel General Kirponos also made a quick climb up the ranks: in the war with Finland, he commanded an infantry division, less than three months an infantry corps, then he subsequently became commander of the Leningrad and Kiev special military districts. As front commander, he had to manage more than 58 formations. Such a load was beyond the power of both. In addition, they did not master the methods of managing strategic, front-line and army operations worked out by the enemy on European fields.

Pavlov was removed from the post of commander a week after the start of the war, Kirponos died surrounded by September 20 1941. The remaining three front commanders were dismissed as unmanaged.

Unfortunately, other marshals and generals turned out to be professionally untenable. During the 46 months of war, the posts of the front commanders were occupied by the 43 man, moreover, from five to ten fronts acted in different periods. Most commanders - 36 visited these positions in the first 14 months. Only on the Western Front, in just four months, seven commanders changed.

Back in 1944, Zhukov noted: “We had no pre-selected and well-trained commanders of fronts, armies, corps, divisions. At the head of the fronts were people who failed one thing after another (Pavlov, Kuznetsov, Popov, Budyonny, Cherevichenko, Tyulenev, Ryabyshev, etc.). ”

Untrained people were forced to be appointed to high command positions. But there were simply no others, the reserve of personnel at the operational-strategic and operational levels was absent. The corps of the front commanders was formed only by the fall of 1942.

In the ensuing 32 months of war, only seven new 43 commanders were appointed to such high positions. I. Kh. Baghramyan, N. F. Vatutin, L. A. Govorov, G. K. Zhukov, I. S. Konev, R. Ya. Malinovsky, K. A. Meretskov, K. K. Rokossovsky, I. D. Chernyakhovsky. Their so important qualities as youth, extremely deep knowledge. stories and theories of military art, ennobled by talent and willpower, ensured rapid mastery of the methods of modern warfare and allowed them to professionally outperform German commanders.

In early September, 1941 of the year Soviet troops under the command of G. K. Zhukov carried out the first offensive during the war to defeat the strike force of the German fascist troops in the Yelni area. And on December 5, 1941-led troops of the Western Front launched a counteroffensive near Moscow. The victory was achieved thanks to the skillful actions of the commander.

Zhukov possessed the gift of foreseeing the intentions of the enemy, the ability to penetrate into the essence of the created situation and find effective solutions and methods of actions in accordance with the prevailing conditions. Together with Vasilevsky, he proposed to abandon the unsuccessful counterattacks and conduct an offensive operation to encircle and destroy the Nazi troops near Stalingrad. In the summer of 1943, Zhukov guided the actions of the fronts in the Battle of Kursk, which began with the repelling of enemy attacks and the subsequent transfer of Soviet forces to the offensive. At the final stage of the war, in the Berlin operation, he brought into battle two tank armies to defeat a strong enemy force on the outskirts of the city, in order to avoid protracted battles in the capital of the Reich. Zhukov carefully worked out all operations, provided them with all-round capabilities, skillfully applied one of the most important principles of military art - concentrating forces and means on the directions of the main attack in order to defeat the main enemy groups.

The operations of one of the most gifted commanders of the Great Patriotic Marshal KK Rokossovsky were distinguished by originality, the ability to use the weaknesses of the enemy, to ensure maximum fire support for troops in defense and offensive, and creative solutions to the tasks at hand. In the battles in the area of ​​Stalingrad, his subordinate troops of the Don Front participated in the encirclement of the German fascist forces and its destruction by the method of sequential cutting off. In the battles near Kursk in the summer of 1943, by Rokossovsky’s decision, for the first time, an artillery counter-training, which played a certain role, was carried out. In the Belarusian offensive operation 1944, the headquarters adopted an unusual proposal by Rokossovsky for the two forces attacking the 1 of the Belorussian front led by the troops to surround and destroy the Bobruisk enemy grouping.

The commanding art of Marshal I. S. Konev, especially in the offensive Kirovograd, Korsun-Shevchenko, Uman-Botosha, Lviv-Sandomir, Vislo-Oder, Berlin, Prague operations, was also vividly manifested. And none of them, by design and execution, repeated the other. Each one was distinguished by its originality, creative approach to solving operational problems, bore the stamp of individuality, military leadership inspiration.

Marshal KA Meretskov superbly acted as commander of the Volkhov and Karelian fronts, where operations were carried out in a complex wooded and swampy area with numerous lakes and rivers. Despite the incredibly difficult conditions, his troops, together with the Leningrad Front at the beginning of 1943, broke through the blockade. In 1944, the troops of the Karelian Front liberated Karelia, the Soviet Arctic and northern honor of Norway. As a result, Finland withdrew from the war.

Success in these operations was achieved thanks to the leadership art of Meretskov. He was distinguished by a skillful choice of directions of the main attack, thoughtful concentration on these areas of troops and material and technical reserves with a limited number of roads, bold roundabout maneuvers to reach the flanks and rear of the enemy, as well as coordinated actions with the Northern Fleet and the Onega flotilla. These operations were included in the national military historiography among the best achievements of Soviet military art.

Vasilevsky and Malinovsky, Govorov and Tolbukhin, Eremenko and Chernyakhovsky were distinguished by their creative originality, originality, thorough forethought and ability to translate into life strategic operations.

The propaganda minister of Nazi Germany J. Goebbels 18 March 1945 made the following entry in his diary: “The General Staff sent me a book with biographies and photographs of Soviet generals and marshals. From this book you can read a lot of things that we have missed to do in the past years. Marshals and generals are on average extremely young, almost none older than 50 years ... The command elite of the Soviet Union is formed from a class better than our own. I told the Führer about the book of the General Staff about the Soviet marshals and generals that I reviewed, and added: I have the impression that we cannot compete with such a selection of personnel. The Fuhrer fully agreed with me: our generals are too old and too exhausted. ”