11 2016 June
5
"Our troops held each of the positions for several days, sometimes for weeks."


Against the backdrop of grand battles in Poland, the battle for the Dniester looks like an episode. But the actions of the 11 Army of the South-Western Front gave the most valuable resource - time, which in the situation after the Gorlitsky breakthrough was the main factor.

The battle of Zhuravlen is a defensive offensive operation of the 11 Army of the Southwestern Front. The 6, 22 and 18 th army corps, by their actions 24 of May - 2 of June 1915, bound the enemy to considerable strength. As a result, the South German army suffered a major defeat.

The balance of power

The southern German army of A. von Linsingen, acting synchronously with the group of A. von Mackensen, in the middle of May pressed the 11 Russian army. Despite the successful counterattacks of the Russian troops 15 – 17 in May, the 18 th army corps moved to Zhuravno and Kalush, and the 22 th went to Mykolaev. Continuing to advance, the enemy on the night of May 24 crossed the Dniester.

The central place in these battles belonged to the operational grouping of Lieutenant-General V. I. Gurko (6 Army Corps and attached formations) - she played a decisive role in the battle of Zhuravleni. Komkor recalled: “In the middle of the night I was lifted out of bed. The chief of one of the assigned divisions from the 22 corps called with a question if I would allow him to withdraw his division beyond the Dniester, he had already prepared and partially strengthened a very advantageous position on the opposite bank of the river. Having forbidden to undertake anything like that, on the contrary, I strictly ordered him to immediately go on the offensive himself. If necessary, I told him, he could transfer his reserves from the left bank of the Dniester, while I would support his offensive with the actions of neighboring divisions. Soon a report arrived that our offensive was developing successfully, the Finnish division went forward. These circumstances and the arrival of fresh parts of my army corps became a turning point of our operations in this sector of the front along the Dniester River. ”

By May 26, the Austro-German units were concentrated on the left bank of the bridgehead at Zhuravno. In this situation, the flank attack of the 6 Army Corps and the units attached to it was of decisive importance. The success of the actions of the Gurko group was largely due to the fact that, in turn, its right flank was covered by the swampy floodplain of the Dniester. To the left of the grouping of 6 and 22-th army corps were 18-th army corps and 3-I Guards Division with one brigade from the corps of Gurko.

27 May began the offensive of Russian troops. The official summary assessed the success of Russian weapons in two-day battles: “On the left bank of the Dniester, in the area of ​​Zhuravno, the enemy, after a stubborn battle, was thrown by us behind the railway line. Several villages have passed into our hands, and when we took the village of Bukachovtsy, we took 800 prisoners with 20 officers. During the 28 of May, by the heroic efforts of our troops, significant enemy forces that crossed the Zhistravno to the left bank of the Dniester and spread to the entire front of Zhuravno - Sivka were driven back with great losses for the enemy to the right bank. In a stubborn battle, we took 17 guns, 49 machine guns, 188 officers and up to 6500 Germans and Austrians. Among the prisoners there is a fully surrendered company of the Prussian Guards fusilier regiment. "

Part of the German 3 Guards Division suffered a heavy defeat at the village of Vyshnyyiv, suffering significant losses.

From 26 to 28 in May, the trophies of the Russian troops were 348 officers, 15 431 lower rank, 17 guns and 78 machine guns. Taking into account the 24 – 26 battles of May, when the enemy’s attack was reflected, 18 thousands of Austro-German soldiers and officers were captured in total, 23 guns were captured.

To assist the Austro-German troops retreating to the right bank of the Dniester, the enemy launched an offensive on both banks of the Tysmenitsy river, capturing 28 in May, the village of Grushov. But then it was thrown back by the Russian troops, and in the following days the battles, which had the character of counter troops, again turned into an offensive of our divisions. May 31 captured 1200 prisoners with 29 officers and seven machine guns in the battles of Tysmenitsy and Stryi, and 1 officer 2 of the lower ranks, six guns and the 202 machine gun in the battles of June 8544 – 21 June. 3 June Gurko's troops went over to the defensive - the offensive operation ended.

As a result of the operation, the South German army suffered a serious defeat. The enemy was thrown to the right bank of the Dniester, Russian troops approached the city of Stryi, a major railway junction - 12 kilometers remained before it. Zhuravlenskaya victory forced the enemy to curtail the attack on the Galich direction and to engage in the regrouping of forces.

The current situation (the withdrawal of neighboring armies as a result of the Gorlitsky breakthrough) forced the Russian command to curtail a victorious offensive and go on the defensive. The South-Western Front began a strategic retreat, with the rearguard battles the troops of the 11 Army retreated, because the rollback of the Russian troops from Lvov and Peremyshl threatened its rear.

Gurko recalled: “The retreat of the entire South-Western Front was carried out, one can say, stepwise - we consistently switched to a number of new positions prepared in advance on the left banks of the local rubicons — the tributaries of the Dniester. Our troops held each of these positions for several days, sometimes for weeks. ” The systematic withdrawal was achieved by the success achieved in the operation of Zuravneni.

Victory that saved the front 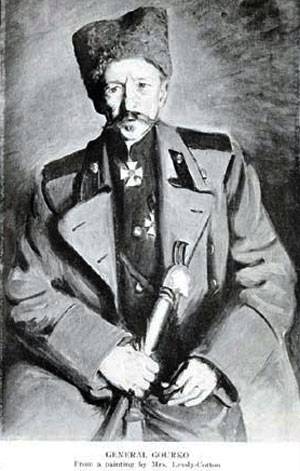 Operation Zhuravno - operational and tactical victory of the Russian army, even with elements of strategic success. Trophies of Russian troops from 24 May to 2 June inclusive - about 28 thousands of prisoners, 29 guns, 106 machine guns. It is worth remembering that the victory was won against the bleak background of the second half of the 1915 campaign of the year.

The main adversary of the 6, 22 and 18 of the 11 Army's corps were the German Hoffmann corps (130, 131 and 132-I infantry brigades) and Marshall (48-I reserve and 19-infantry divisions, of which the head of the 3, 5 and 64-34-Infantry Brigade), Marshall, and the head of the 27 and 3-40 14 Army and 28 50 XNUMX Army XNUMX and XNUMX Army Corps XNUMX and XNUMX Army Corps XNUMX and XNUMX Infantry Brigade divisions), the Austrian XNUMX th Army Corps (XNUMX-I infantry brigade and XNUMX-I infantry division). The official Austrian description of the fighting at Zhuravno notes the serious losses of the Austro-German troops (including the guard). Thus, in the XNUMX battle in May, the enemy acknowledges the loss of two thousand people from the XNUMX Guards Infantry and XNUMX Throwed Infantry Divisions, and the XNUMX Infantry Brigade lost to XNUMX percent of its composition by XNUMX.

The operation at Zhuravno not only showed high activity of the Russian army during the defensive period, it contributed to a change in the operational planning of the enemy. The fact that the divisions of the 11 Army not only withstood the strongest onslaught of the Austro-Germans, but also had a great success, smashing them and dropping over the Dniester, led to the collapse of the enemy's strategic plan - to go to the rear of Lviv and the main grouping of the Southwestern Front. Only with the help of additional forces did the enemy manage to cope with the threat to his flank. But it was eliminated just due to the grouping on the main operational direction. The measures of the Russian command were absolutely literate, because only energetic actions lead to the disruption of the enemy’s plan: he is forced to react to them, to change goals and objectives. And the actions in the flank of the advancing enemy are doubly effective.
More: