The action, which with the maximum socio-political effect requires minimal human and financial investments, for some is called “terrorism”, for others — an “affordable means of achieving goals”.

The main event of any terrorist attack is the killing of most of the civilian population. To prevent this should lead scientific research. With this should be correlated any efforts to curb the attacks. The real result can only be considered averted tragedy.

Experts studied Islam - the attacks did not stop, investigated history terrorism and its phenomenology - attacks continue. Deepening in ethnopsychology, theology, characterology and other aspects of the phenomenon gives nothing. What are we doing wrong?

The philosophical and psychological basis of the phenomenon of terrorism lies in the fact that man is one and the same in measuring the body, psyche, conscience and spirit. If problems arise on one level, they appear on another. In a harmonious person, they are all developed evenly. The individual is inclined to save them. If circumstances make it impossible, a hierarchy is built. The levels that can be sacrificed are chosen, the more significant ones remain inviolable. Terrorists also have a physical body, they have a psyche, conscience (sense of right), meanings, spirituality. But they are fundamentally different, and consider them on the basis of the coordinate system in which we live with you, it is useless. Common language will never be found. The opportunity to take the path of terror lies in the structure and qualitative originality of the consciousness of a particular person. Such people are among any ethnic group, in every culture and religion. The psycho-terrorist is international and universal. What is important is what factors and how influence the formation of his consciousness.

From the point of view of the researcher, some anti-mythological installations are important. First, it must be admitted that top-secret and super-effective methods of “zombing” into the ranks of suicide bombers are absent. Neither the emirs, nor the preachers, nor the recruits themselves know about them. Secondly, all suicide bombers are united by one property of the psyche that is of interest for study, namely, suggestibility. Let's name a number of the psychological features connected with it which are characteristic for all terrorists: 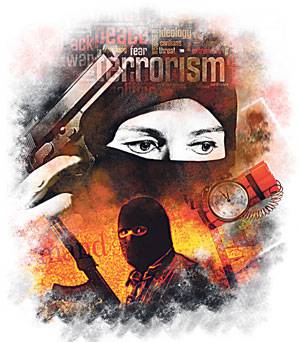 1. The degree and severity of intellectual disorders. The presence of concomitant mental illness and conditions.

3. Tendency to maintain a hedonistic lifestyle, to meet the immediate desires and needs.

4. The level of addiction (evidence of substance use - alcohol, drugs, drugs), the formation of dependence on other people.

5. Emotional instability, superficial judgments, a tendency to symbolize and attribute the phenomena of everyday life.

6. The weakness of volitional control of their own actions.

7. The inability to give a personal assessment of what is happening, a focus on the opinion of outsiders, uncritical behavior to their own and others.

8. Internal conflict caused by the discrepancy of the desired and actually performed social role. Attempts rejected by society to occupy in it the desired niche, narrowness and specificity of contacts.

The results of our many years of research show that, in particular, Muslim organized criminal groups (MOGG, terrorist organizations) have several components of functioning.

First of all, the conventionally ideological component stands out - religious Islamic trends and postulates that are declared by representatives of the MOGD: Wahhabism, Nourism, Alavitism, Sheikhism, Sufism, Kharijism and others.

Of great importance is the nature of the organization. MOGF is a kind of symbiosis of a sect and a criminal grouping in which the most viable, practice-oriented methods of functioning and self-reproduction of these associations are preserved.

One of the key roles in the MOGD is played by the deep motivational component of jihad, its internal and physical aspects, and the specific psychological, semantic and behavioral field. Of particular importance is the psychological portrait of the contingent joining the group.

Practice shows that there are several surface as well as deep levels of motivation for joining the MOGG and carrying out terrorist acts. A huge role is played by the desire to change your life so that you get what one doesn’t have, considering himself worthy. Among the most significant motivational aspects are the following:

personal gain (self-interest, the desire to occupy the desired social position, to satisfy low-lying needs, to gain psychological benefits: to raise self-esteem, to realize inadequate claims);
enjoyment (sadomasochistic inclinations, sexual perversions, latent sadism);
suggested attitudes (not intrapersonal motivation, but superficial, introduced from the outside through education, training);
the desire for power or at least its imitation;
increased aggressiveness;
coercively-motivated behavior (not the subject’s own motivation, but, for example, coercion to undermine through the creation of intolerable living conditions, physical or psychological violence);
the desire to find their social niche, to be realized.


An analysis of the psychological characteristics and motivational principles of the behavior of potential terrorists makes it possible to single out at-risk populations where the chances of the appearance of persons capable of committing a serious crime are highest.

First of all, these are subjects who are in a state of deep grief, especially in the pathological state associated with the loss of loved ones. There is a very high risk of manifestation of terrorist tendencies among subjects with mental retardation, mental retardation and pedagogical neglect. Favorable environment can be social outsiders, outcasts of society, marginalized and lumpen. Subjects with inadequate self-esteem and an overestimated level of claims are very dangerous. Predisposed to terrorism are aggressive, impulsive, psychopathic personalities. Drug and alcohol addiction, destroying a person, makes him a toy in the hands of the organizers of the terrorist attacks. Those who find themselves in a difficult life situation, especially if they perceive it as hopeless, psychologically broken, can be easily forced into terrorist activity, either by promising a way out of a difficult situation, or by direct threats to themselves and their families. However, the most endangered group is the Sharia wives and sexual slaves who are in a position where death seems to be the best deliverance from the painful existence that they drag. The risk of becoming a Sharia wife is for women who are in the “active search” of the second half and who are not just surviving a divorce or having unsuccessful attempts to arrange a private life, but submitting their problems and emotional state to the public, asking for help dating sites, women's forums, where periodically recruiting neophytes. Another equally dangerous environment is communities of people who sincerely sympathize with terrorists, who feel “identification with the aggressor” (citizens who, after committing terrorist acts, call for understanding, forgiving of criminals, appealing to their pain, difficult life, psychological trauma).

Thus, quite obvious personal, intellectual, social deviations of members of terrorist groups exposed to mass ecstasy, and sometimes even psychosis, hide behind a leaky ideological and theological veil in the form of “testimony of a shahid of monotheism”, religious hatred, etc. In fact, the deep mental defects in the form of, for example, pathological sadism in their expressions receive a reliance on the super-idea of ​​the “war with the infidels”, which plays the role of an explanatory psychological mask justifying any atrocities, wands ism and inadequate behavior.

Every death of a shahid, every destroyed "lone hero" increases the value of the idea of ​​terror. Indeed, from the point of view of universal morality, death, even meaningless, cannot express the banal mental or intellectual inadequacy of the whole group. Here we are dealing with one of the main and deepest archetypes of any culture and ethnic group. Death is by definition meaningful. And a terrorist too. The universality of this formula leaves no chance for the rapid achievement of the goal of countering the terrorist threat.

The image of a suicide bomber through the efforts of "experts on assassins" and the media has already become an archetype. To level it, it will take the efforts of the social institutions of all states for very long years. For generations. Or maybe for ages ...