The only real guarantor of the independence of Mongolia is Russia. This, however, does not mean that they need us more than they need us.

At the beginning of the 90s (under Foreign Minister Kozyrev), Moscow tried to build a foreign policy mirroring to the Soviet, reversing allies and opponents. However, by the middle of the 90-x illusions about the West began to pass, after which Russia began to at least partially restore the old ties. This possibility was preserved because they were strong enough: a significant part of the ruling elite of friendly countries studied in the USSR and knew Russian, there was a close economic and, no less important, military cooperation. The Allied armies were built according to Soviet models, equipped with our weapons, it was extremely difficult and expensive for them to switch to the Western system and equipment, even if they had the desire and opportunity.

East and South Asia has traditionally been the second most important direction of domestic foreign policy after Europe (although it gradually began to move the Middle East to third place since 60). Mongolia, Vietnam, India and the DPRK were traditionally our most important allies in this region. The extremely specific situation on the Korean Peninsula and the role of Russia in this conflict is known to readers (“Democratic Pyongyang vs. Totalitarian Seoul”). Let's talk about our oldest ally in Asia.

Mongolia in its current form gained independence exclusively thanks to Russia. More precisely, it separated from China in 1911, taking advantage of the chaos of the Xinhai Revolution. But she managed to maintain independence only thanks to support - first Russian, and then Soviet. It was the USSR, which achieved official recognition of Mongolia from Beijing. China's attitude to this fact is now traditional for the country: it recognizes previously concluded agreements until it becomes possible to break them. In all Chinese historical publications say that Mongolia gained independence illegally, and the USSR "knocked out" the recognition of this country, taking advantage of China's weakness. This is the official uncontested position, which means that as soon as Beijing has a chance, Mongolia will immediately say goodbye to independence. With a huge territory (about 1,56 million square kilometers, 18th place in the world) with a very small population (just over 3 million people, 138th place), this country is deprived of the opportunity to defend itself against Chinese aggression. It is only prevented by Russia by the very fact of its existence.

In the post-Soviet period, Mongolia, which also abandoned socialism and switched to a democratic form of government and a market economy, actively developed relations with the West, and most of its armed forces went through various UN peacekeeping operations, where Mongolian soldiers and officers proved themselves quite well. Nevertheless, this does not provide them with the opportunity to resist the PLA (the number of which in peacetime is slightly less than the entire population of Mongolia), and the West cannot really be the guarantor of the country's independence. Firstly, for purely geographical reasons: it has no access to the sea and borders only with Russia and China. Accordingly, for foreign troops to be on the territory of Mongolia, you need at least the consent of Russia. Despite the holes in our air defense system in the Far East, "without prior arrangement" through our airspace, even the Americans will not risk flying. Secondly, and much more importantly, the United States, not to mention Europe and Japan, will not, under any circumstances, go to war with China for the sake of saving Mongolia.

Understanding of this in recent years, apparently, appeared in Ulan Bator. And then Moscow finally remembered the existence of a country where, until recently, the entire population knew Russian. And decided to give her some attention, including in the military sphere and at least a little update the hopelessly outdated equipment.

In the arsenal - spare parts

The ground forces of Mongolia have the 016 th motorized rifle brigade, the 017 th building regiment, the 150 th peacekeeping battalion (the 330 th will be formed), the 084 special forces battalion. There are also up to six regiments of incomplete low-readiness personnel. 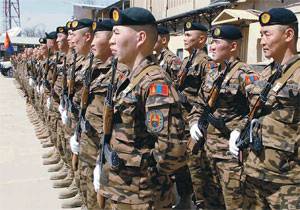 Almost all the equipment of the ground forces is extremely outdated, a significant part of it is not capable, therefore the figures cited are largely arbitrary. Some exceptions are the T-72 tanks, as well as the BTR-70 and BTR-80 tanks, delivered in recent years from the Russian Armed Forces.

The Mongolian Air Force does not currently have any combat or auxiliary aircraft. Previously in service 12 MiG-21PFM and 2 MiG-21UM were transferred to storage and, apparently, will be sold abroad for spare parts. Accordingly, the entire strike power of the Mongolian Air Force is up to 11 Mi-24 combat helicopters. In addition, there are transport: up to 8 Mi-8, 2 Mi-17. An-24 and An-26 aircraft transferred to the civilian aviation.

It is significant that, despite participating in the Afghan and Iraq campaigns, Mongolia acquired only a certain amount of equipment and equipment from the US. Mongol weapons are still one hundred percent Russian. And conditionally, new equipment has been acquired recently from us. Since 2008, the annual joint military exercises of Selenga have resumed, which take place alternately in Mongolia and in Buryatia ethnically related to it, and their scale is growing.

The vast territory of Mongolia occupies the most important strategic position between Russia and China. In the event of war, the party that controls Mongolia will win. That is why the relationship with her is critically important for both. The preservation of neutrality “between two fires” by Mongolia seems completely unrealistic.

In general, it should be clearly understood that there are two countries that Russia is obliged to defend against China as well as itself, Kazakhstan and Mongolia. Having passed them, we get a geopolitical mat from Beijing, our position in this case becomes hopeless, the territory east of the Urals is lost automatically. It is not obvious that the Kremlin understands this fact, although in recent years some signs of realism towards China have begun to appear. So far, alas, too weak.

Ctrl Enter
Noticed oshЫbku Highlight text and press. Ctrl + Enter
We are
Tactical lessons of the last two wars of Iraq for an all-arms commanderMemo to mercenaries in Africa
Military Reviewin Yandex News
Military Reviewin Google News
80 comments
Information
Dear reader, to leave comments on the publication, you must sign in.