8 2016 June
264
The 6 June analytical center of Yuri Levada on its official website presented the results of a survey of Russians aged 18 years on the subject of political sympathies regarding political parties. The survey may well be considered relevant due to the fact that 2016 is a year of parliamentary elections, and only about 100 days remain until the citizens' will.


Moreover, these will be the first parliamentary elections in modern Russia after a five-year hiatus. The will of each reader is to believe the sociological calculations of the Levada Center or not to believe, however, the presentation of the survey and its final results will not be superfluous. And it will not be superfluous also because on the pages of our information and analytical portal, readers in the framework of the survey will also be invited to express their political preferences. So to say, for comparison (not taking into account the nature of the audience, of course).

In his case study “Levada Center” asked respondents three questions. The first of these concerned the electoral activity of the Russians during the upcoming parliamentary elections. As it turns out, 26% of Levada Center respondents have not yet decided whether they will go to the polls or not. Another 25% responded that with a certain degree of probability they would go to the polls. 26% said that they would not go to the polls either, or they would rather not. Confidence in their participation in the voting this fall expressed 19% of respondents.

The question with the number “two” concerned the party sympathies of the Russians, who were among the respondents of the Levada Center (a total of 1,6 thousand people were polled). And the percentages were considered from all who spoke on this issue, and not just from those who are going to come to the polls. According to the survey, in the first place - "United Russia", for which their votes are ready to give 35%. The 5% barrier (and now it is again 5, and not seven percent), according to the “Levadov” results, two more games overcome. This is the Communist Party with the result in 14% votes and the Liberal Democratic Party with 9%. Another current parliamentary party, namely, “Fair Russia”, if elections were held exclusively among Levada Center respondents, remains outside the percentage of passing to the State Duma - only about 2%.

All other applicants - 1% and less. So, 1% result in this case shows the party Navalny ("Party of Progress"), "Communists of Russia" M. Suraykin (not to be confused with the Communist Party of the Russian Federation) and "Civil Force". For example, Kasyanov's Parnas, for some time supported by Mr. Khodorkovsky from abroad, and not only, as well as Yabloko, fall short of 1%. Within the framework of the statistical errors “Russian Party of Pensioners for Justice”, “Greens”, “Motherland” A. Zhuravlev, “Party of Growth” by Boris Titov, etc.

The third question is the same, but with a percentage of exactly those who are ready to precisely come to the polls. The first final four is the same: EP - 53%, Communist Party - 21%, Liberal Democratic Party - 14%, CP - 4%. CP and here behind the State Duma. Navalnovtsy, Kasyanovtsy, Yablochniki and all the rest - within the limits of statistical error - well, they didn’t make happy of those surveyed by “Levadovtsi”, oh, they didn’t please ... 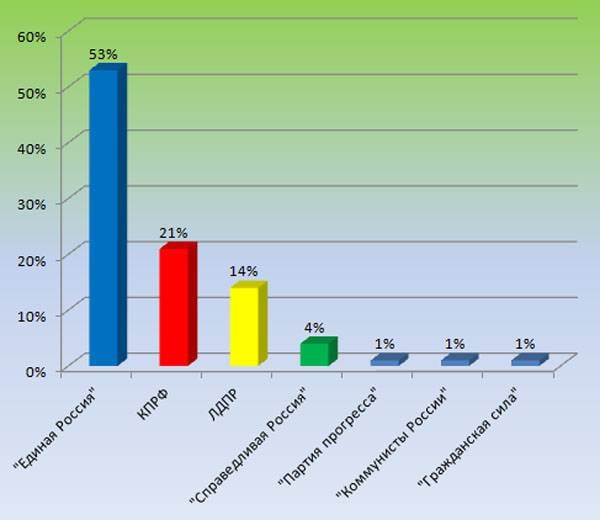 If we conduct a comparative assessment of such surveys from Levada Center since January of this year, it turns out that only two parties have positive dynamics. Both are parliamentary - the Communist Party and the Liberal Democratic Party. If in January 2016-th for the Communist Party were ready to vote 16%, now by 5% more. January Liberal Democratic Party results from Levada Center - 8%. The most significant drop (although the rest, in principle, nowhere to fall ...) ratings from United Russia: from 65% in January to 53% of the current ones. And it’s hardly possible that the main reason lies solely in Dmitry Medvedev’s epic statement “there’s no money, you’re holding on to it ...” Then, as the living classic says, isn’t it time to tinker with something in the conservatory ...

As follows from the results of this survey, in the fall of 2016, the lower house of the Russian parliament may turn out to be three-party. For the time being, the same fair Russia for overcoming the 5% barrier with confidence seems to lack even a populist claim that they are initiating the deprivation of deputy mandates with respect to Ilya Ponomarev and Alexei Mitrofanov. And here, too, something will have to be corrected at the “conservatory,” if, of course, Sergey Mironov and his party members are going to get warm armchairs in the building on Okhotny Ryad for another five years. The three leaders, as usual, are calm, because they understand that in the current political situation in the country they have no outside competitors, and the main battle for votes will most likely be between these parties, which have recently become quite difficult to catch some kind of opposition to each other ...

The chances of everyone else are ghostly, and they hardly understand it. They understand perfectly well ... Therefore, the word “revolution” erupted from the mouth of one of the patrons of a separate small group of Kasyanov’s “Parnassus” (the aforementioned Mr. Khodorkovsky). The apologists of Western democracy have no other way ... Only on the basis of paragraphs of an overseas training manual, which has recently begun to clearly get rid of itself. And taking into account the fact that nothing has yet been invented by the new sowers of "democracy", all these "Parnassians", "progress" and "apples" shine another wave of facebook moans in the style of "We cheated! Washington, Brussels, help! ”

And as a small “lyrical” digression from the topic of the elections to the State Duma of Russia, a small remark about who specifically conducts the polls. The other day the site of the radio station Echo of Moscow asked a very specific question to his listeners (readers). The question sounded like this: 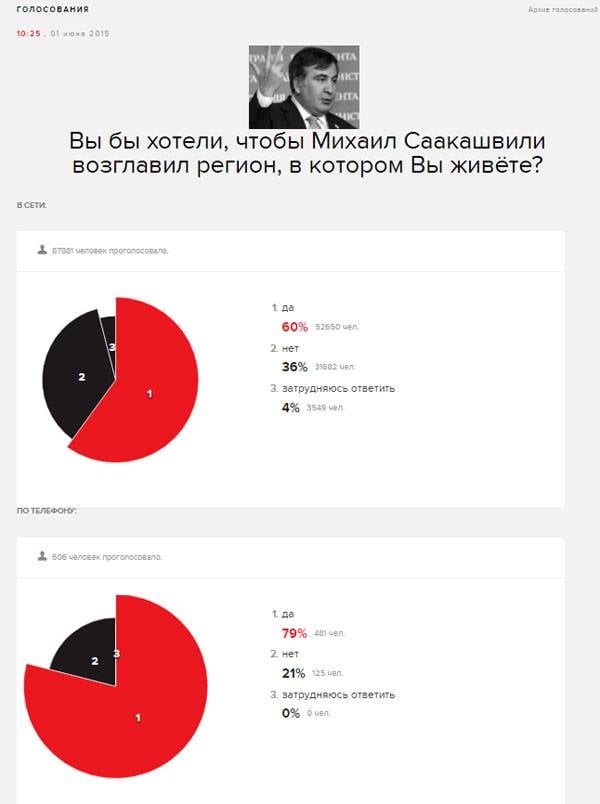 And although история he is silent about how many voters represented Ukraine, Georgia and Russia, Saakashvili himself was so inspired by the results of the Echo poll that he wrote on his Facebook page: “I'm not going to change Odessa to Kostroma”.

And now - an appeal to the readers of "VO" with the proposal to take part in our survey on the subject of your personal political sympathies of the day today. Compare with the results of the survey "Levada Center". So that the readers would not have any complaints about the arrangement of the parties in the list, they are placed in alphabetical order.

About Saakashvili ask, sorry, we will not, because the answer is predicted in advance ...