7 2016 June
17
The Information Department of the Federal Bailiff Service spreads a message that cash in the amount of approximately 750 thousand rubles, due to Mikhail Khodorkovsky by decision of the ECHR, was sent to the state budget of the Russian Federation. We are talking about compensation for "moral harm" in the case of "Khodorkovsky and Lebedev against Russia." The ECtHR some time ago decided that Khodorkovsky was really “morally injured”, and he suffered in the amount of 10 thousand euros. This compensation in the account of Khodorkovsky's debt was sent to the Russian budget by representatives of the FSSP. 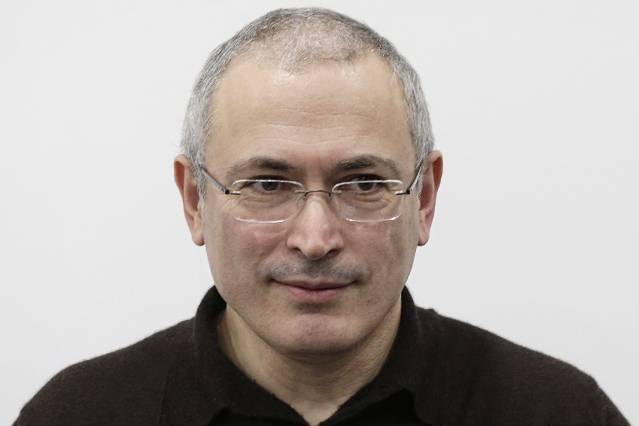 Press office FSSP comments on this:
The Directorate for the Enforcement of Especially Important Enforcement Proceedings of the Federal Bailiffs Service holds the consolidated enforcement proceedings in relation to Mikhail Khodorkovsky and Platon Lebedev on joint collection of funds in the amount of more than 17,5 billion rubles into the federal budget.

The bailiffs established that the decision of the European Court of Human Rights on the complaints "Khodorkovsky and Lebedev against Russia" in connection with the violation by the Russian authorities of the provisions of the Convention for the Protection of Human Rights and Fundamental Freedoms MB. Khodorkovsky should be paid non-pecuniary damage in the amount of 10 thousand euros.

December 30 2015 of the year according to the application of the Directorate for the Enforcement of Particularly Important Executive Proceedings of the FSSP of Russia by the definition of the Meshchansky District Court of Moscow imposed a penalty on the funds payable by MB Khodorkovsky, by transferring funds to the Deposit Management Account.

3 June 2016, the equivalent of 10 to thousands of euros in rubles in cash, was transferred by the Ministry of Justice of the Russian Federation to the deposit account of the Directorate for the Execution of Particularly Important Enforcement Proceedings of the FSSP of Russia. Currently, this amount is distributed and transferred to repay the debt in the framework of the enforcement proceedings to the budget of the Russian Federation.

From what assets of M. Khodorkovsky the FSSP is going to recover the remaining 17 with more than billion rubles, it is not reported.

Ctrl Enter
Noticed oshЫbku Highlight text and press. Ctrl + Enter
We are
The action “Military service under the contract is your choice!” In Rostov-on-Don: future contract servicemen, exhibitions and “Russian Knights”Photo from Syria by Mikhail Leontiev
Military Reviewin Yandex News
Military Reviewin Google News
17 comments
Information
Dear reader, to leave comments on the publication, you must sign in.