During the KTO in Aktobe, Kazakhstani security officials eliminated 13 militants

7 2016 June
73
Press Secretary of the Ministry of Internal Affairs of Kazakhstan Almas Sadubaev announces the progress of the operation to eliminate the militants who attacked weapons shops and military unit in Aktobe. According to Sadubaev, to date, Kazakhstani security forces have eliminated 13 militants, four more were injured in shootings with police special forces. From a chapter post press service:
The entire staff of the internal affairs bodies of the country continues to serve in an enhanced regime. The situation in the city and in the whole republic is stable and under control. 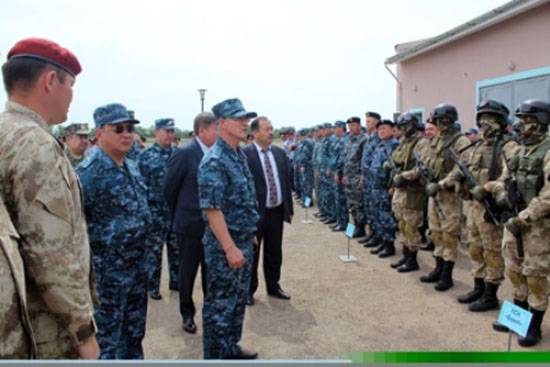 The Ministry of Internal Affairs of the Republic reports that the “yellow” (moderate) regime of the terrorist threat will operate for 40 days.

Informational portal Orsk.ru reports that in Aktobe at the time of the counter-terrorist operation, a group of journalists from a regional information publication was detained. It is reported that the police said the townspeople, whom people with a video camera seemed suspicious. At the same time, journalists note that the detention was carried out quite correctly. From the message of journalists:
Everything was very cultural, polite, no one applied any force. Several times they asked if their motives were clear to us, why we were being detained. We first seized the video equipment, it was necessary to exclude the shooting.

A few hours later, Russian journalists were able to leave the KTO zone in Aktobe.