7 2016 June
63
According to the Chinese media, the military transport aircraft Y-20 "very soon" will be adopted by the PLA Air Force, "Military Parity" writes about this. In particular, Zhu Chen, the manager of this program, the head of the department for the development of large aviation projects. According to him, China may need more than a thousand Y-20 aircraft. According to Zhu Chen, the plane was created by Chinese specialists taking into account the experience of similar developments in Russia and the United States. At the same time, in China, the aircraft will be actively operated not only by the military, but also by civil air carriers.


China still imports engines for this aircraft from the Russian Federation, but the serial production of its own turbofan engines is only a matter of time, Zhu Chen said. “After the Y-20 military transport aircraft enters the arms of the PLA, China will begin creating its own strategic transport aircraft,” he said. The first flight of the Y-20 aircraft was made in January of the 2013 year, so China became the third country in the world that was able to create an aircraft of a similar class after Russia and the United States. The maximum take-off weight of the aircraft is more than 200 tons, payload - 66 tons. This means that the aircraft will be able to transport by air such a heavy load as the main battle tank Type 99А2, weighing 58 tons. According to the calculated data, the range of an aircraft with a payload of 51 per ton should be 5200 kilometers. With a weight of 66 tons, the plane must fly 3700 kilometers, which will allow it to fly non-stop from Harbin to Tibet. The aircraft is operated by a crew of 3 people. 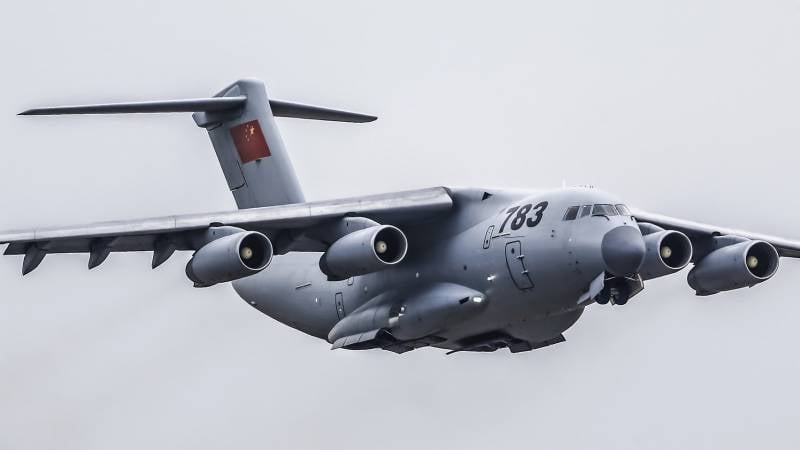 It is worth noting that in recent years, the Chinese military-political leadership has paid great attention to building up the capabilities of its own aviation industry in the creation and production of military transport aircraft (MTC) and helicopters for various purposes. China is no stranger to start creating something from scratch. In this industry, the Celestial Empire has certain problems and difficulties, which leads to the technological lag of the PRC from the leading countries - aircraft manufacturers, due to the dependence on imports of a number of main components and components. In particular, we are talking about Russian-made engines that were installed on the first prototypes of the Y-20 aircraft.

As is known, in 2009-2011, 55 engines D-30КП-2, produced by Rybinsk NPO Saturn, were supplied to China from Russia. In 2011, another contract was signed between China and Rosoboronexport, this time for the delivery to the PRC of more 184 D-30KP-2 engines. The first batch of turbofan data was transferred to the customer in October 2011 of the year. This turbojet dual engine was developed in the 1960-ies, and its mass production began in the 1972 year. In the future, the engine was repeatedly modified and refined, which ensures its longevity. These engines can be found on IL-76 airplanes and its IL-78 and A-50 modifications. In China, they are working to create a copy of this engine and engines based on it. 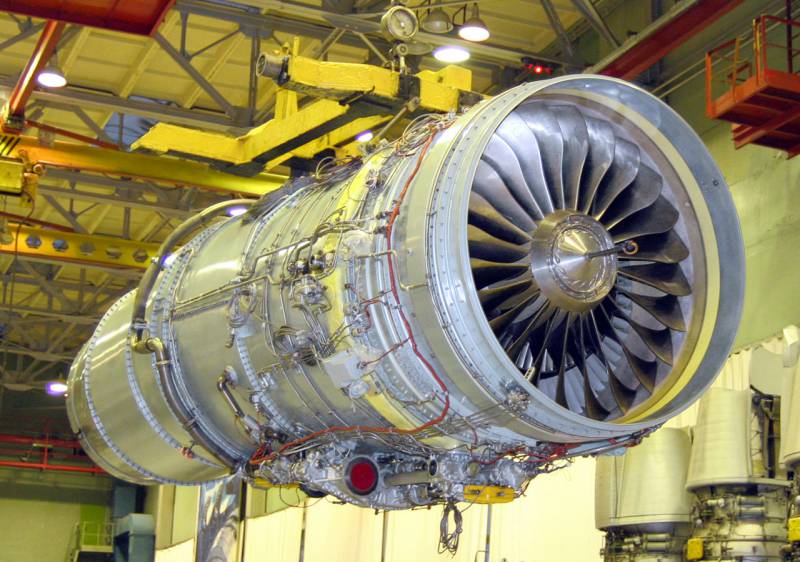 According to military experts, the new strategic military transport aircraft is much more important for the Chinese Air Force than the development of the fifth-generation promising multi-role fighter J-20, which more reflects the growing military ambitions of the PRC. Most likely, Y-20 military transport aircraft began to be developed back in the 1990-ies, and this project received priority public funding only in the 2006 year. The final design of the new 200-ton military transport aircraft was approved in 2009 year, and in the same year China began building the first prototype. The first flight of this VTS took place on 26 on January 2013 of the year. Video recording of this event was actively broadcast on the air of Chinese television companies, confirmation from the country's Defense Ministry about the first flight of the aircraft was received on January 27 2013 of the year. Ground tests of the Y-20 aircraft were conducted in the Middle Kingdom since December 2012.

To date, at least five prototypes of the Y-20 Chinese military transport aircraft are known. In addition to the already mentioned first sample with the onboard number “781”, which made the first flight of 26 on January 2013, the second prototype is known under the number “783”, which for the first time went up to the sky of 14 on December 2013 of the year. The third prototype aircraft took off on January 31 2015 of the year. In December of the same year, the fourth flight model of a heavy Chinese military transport aircraft with a tail number "784" flew into the sky. And already in January, 2016, the Xian Aircraft Industrial Corporation, launched the fifth flight prototype with the 786 tail number on the airfield; its tests will continue throughout the current year. 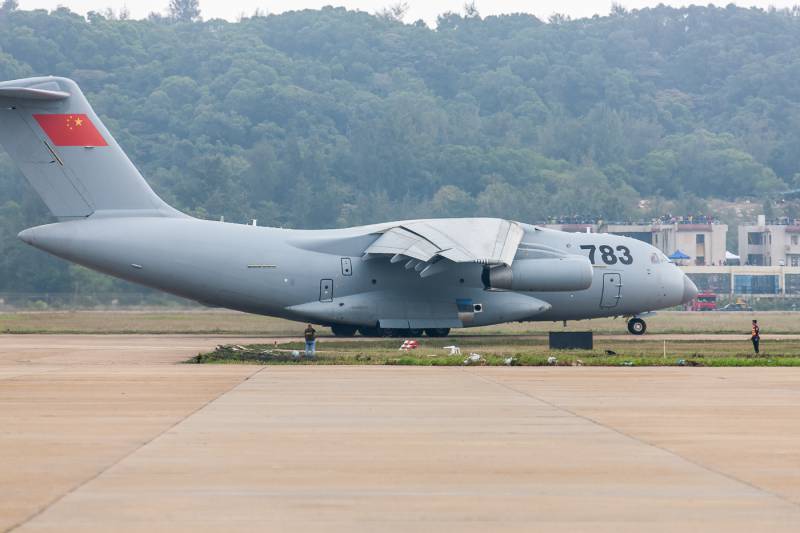 The heavy transport aircraft Y-20 was created according to the scheme of a four-engine high wing with a T-shaped tail unit. The military transport aircraft was equipped with a multi-rack retractable landing gear, as well as a cargo ramp located in its tail section. Externally, the Chinese transporter is somewhat similar to the American military transport aircraft C-17 Globemaster III. At the moment, Y-20 does not have its own modern turbojet engines, it is equipped with Russian-made D-30KP2 turbofan engines, whose characteristics do not reach the PS-90А76 aircraft engine, which is installed on Russian military transport Il-76MD-90А (sometimes called IL-476). At the same time, according to the plans, Y-20 production planes should receive turbojet engines of their own Chinese production - WS-18 with a slightly larger load (122 kN versus 117 kN from D-30КП-2).

Apparently, the process of developing and testing a new Chinese Y-20 military transport aircraft will be completed before the end of 2016. A large aircraft manufacturing corporation Xian plans to immediately transfer the first PLA Air Force aircraft after the completion of the tests. It is assumed that the serial production of Y-20 aircraft will begin at the end of 2016, or at the very beginning of 2017. The Xian Y-20 military-technical cooperation was created for operation from airfields of various types, the aircraft is able to transport most of the combat and auxiliary vehicles used by the People’s Liberation Army of China. He is able to transport cargoes weighing up to 66 tons by air; this is more than IL-76 can transport. The emergence of such an aircraft in China will open up new opportunities not only for the military, but also for civilian cargo carriers, as well as expand the capabilities of a quick response in case of emergency situations and during major humanitarian actions. 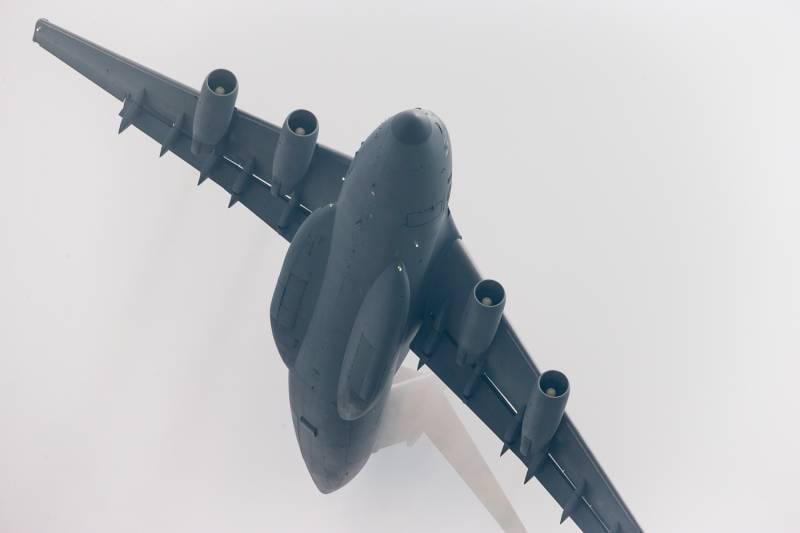 According to Chinese military expert Xu Yunlin, the testing period for military aircraft is usually from 3-s to 5-years. Ground tests of the Y-20 aircraft began in December of the 2012 of the year, he made the first flight in January of the 2013 of the year, based on this, it is worth waiting for the completion of the tests of the machine very soon. The first flight of this military transport aircraft allowed to put China on a par with the states that created their transport planes weighing about 200 tons (Russia and the USA). “This military transport aircraft is not only a demonstration of the capabilities of China’s military industry, but also of the growing potential of the Chinese army,” said Xu Yunlin.

Officially, the aircraft already bears the name "Kunpeng" (Kunpeng) - this is the name of an ancient mythical bird that was able to fly thousands of kilometers. Despite this, in the Chinese military industry, this name is more associated with the kind of plump girl that emerges as an association for the large size of a transport worker. According to Chinese military expert Chen Hong, the carrying capacity of the Y-20, the aerodynamic layout of the aircraft and the overall efficiency will surpass the Russian counterparts.