Alexei Kudrin said that, together with his colleagues, he is working on a program for Russia's economic development commissioned by the president

7 2016 June
134
Last Saturday, 4 June in Moscow hosted a conference with the big name “Challenges-2017”, organized by the Center for Strategic Research - an analytical structure under the government of the Russian Federation. The CSR is an organization about which articles have already been published on our website. And they came out mainly in the “National Security” section, at least because until recently the adherents of ultra-liberalism as an ex-adviser to the President of the Russian Federation, and now, as it turned out, non-systemic “oppositionist”, were in the CSR until recently. »Andrei Illarionov, practically the entire top of HSE in the person of Yevgeny Yasin, Yaroslav Kuzminov and others. It was the Center for Strategic Research that prepared and promoted the basis of the economic policy of the Russian Federation at the beginning of 2000 for execution.


The program, as practice has shown, is simple: investing in gray-green paper, which is called the main currency in the world, as well as accumulating reserves in its greatest mass based on this gray-green paper and its “sister” - Eurocurrency. The program began to obviously slip, as soon as some representatives of the state apparatus had a desire to seriously invest not in pieces of paper, but in the real sector of the economy. With shouts: “Alarm !!! This will ruin the economy !!! ”, the TsSR specialists exhaled loudly and with relief when the federal authorities either refused to make large-scale investments in the aforementioned real sector, or declared that the projects were“ frozen ”and then“ optimized ”.

Today the board of the Center for Strategic Research Foundation, if someone has forgotten, is headed by Alexey Kudrin. That same Alexei Kudrin, who literally the other day announced the “technological backwardness of Russia” and the need “although on the second roles to integrate into the international technological system” for the sake of attractiveness for foreign investors.

So ... In April of this year, Kudrin, the Council of the CSR Fund, headed and now defines the key, you understand, challenges that the country will face in 2017. Apparently, all the challenges of the year 2016-th already leveled ... 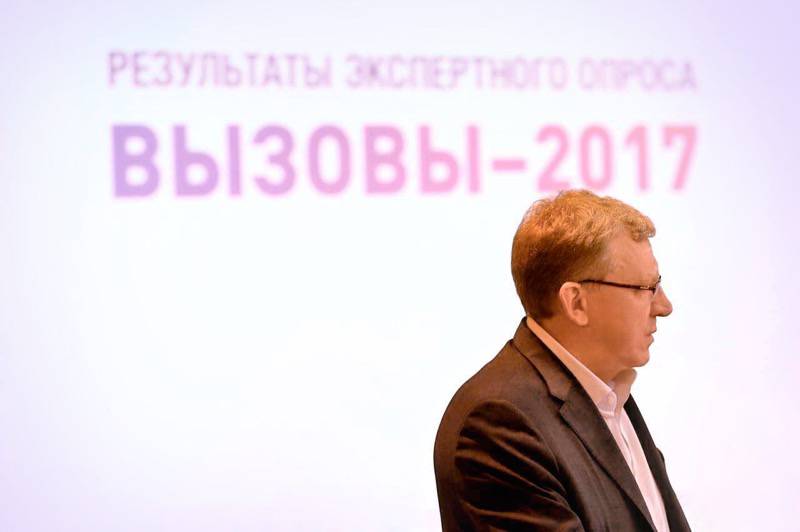 From the statement by the chairman of the board of the fund, it became clear that Aleksey Leonidovich is not refusing the idea of ​​"technological mockery that repels investors".

From materials CSR:
According to the results of the discussion in the first direction (the issues of foreign and domestic policy, security - author's note), the main problem was the deepening of isolation from international capital markets and commodity markets. Another challenge in this area is involvement in conflicts in the zone of interests or near the borders of Russia.

In the second direction (institutions, civil society and human capital - author's note), the main problem is the inadequate level of governance, corruption. Also in this area the challenge is excessive state participation in the economy.

Economic growth is hindered by the persistence of high uncertainty and the unattractiveness of domestic investment, the deterioration of the industrial and social infrastructure, as well as the growing technological gap and restrictions on participation in the global technological revolution.

Even if a person did not complete the HSE, then it is clear to him that an attempt to isolate Russia from world markets and draw into armed conflicts along with the deterioration of the industrial and social infrastructure are factors that negatively affect the economy. Was it worth it for the sake of this statement of obvious facts to assemble a whole conference?

It turns out that it was worth it ... For during the conference, Alexei Kudrin told reporters that the CSR is today engaged in "developing the main provisions of the program created by the order of the President of the Russian Federation" for the 2017 year. That is, it turns out that the president himself orders the economic development program to a fund, which by definition should offer such programs to the Russian government. Or is it a hint from President Vladimir Putin that, since the government itself is not ready to create economic programs, then it’s time to rush to the “rescuers” from the HSE and to Alexey Kudrin personally to ask for help ...

And "help", I suppose, will do. Let me predict (even if the forecasts are ungrateful) what the main theses of the “development program” will be, which ultimately will lie on the president’s table under the signature of A. Kudrin. There is an opinion that economic “gurus” will be called upon to focus on Russia “on internal issues”, as well as on putting money into eurodollar reserves even if oil prices are lower than indicators suitable for such accumulations. In other words, the money - in the jug, and on the embrasure made up of pensioners, Dmitry Anatolyevich will again be thrown with his own, which has become a meme, remark: "There is no money, but you hold on." After all, cubic savings, judging by the ideology of the CSR, is generally the main achievement of Russia, unlike any spending on strategically important projects.

Separately - a clear hint of the CSR that Russia "is in vain involved in conflicts at its borders," not to mention the conflict, for example, in Syria. The promise of economic “gurus” is to make Russia “attractive for investors” at any price. Sorry, we are spoiled by the rejection and radicalization of Ukraine, we are being shoved under the missile system of the American missile defense system, they continue to expand NATO, and we must “not get involved”. Well, it seems like we are not particularly involved. Otherwise, the same Ukrainian camarilla, brought to power by the “investors” in Kiev, would have been looking for the fifth corner for a long time ... Do not get involved, keep ourselves in hand, want to reassure Kudrin and the potential investor ... And the investor, you know, does not calm down. It requires that Russia not only be not involved, but also continue to take the visor in the event of any whim of the "exclusive" state in the world. What from the series: "Yes, sir!" And "Yes, sir!"

Russia is not even being hinted at - they are shouting in a foul language: just don't get out of the economic system we are building! Just do not get out of our "charms" - total debt load, which is one of the pillars of servicing the giant American debt. Sanctions, they say, sanctions, and in Russia in your nugget do not stop investing, Russia! Be our Russia! And, oh yeah, - to the heap - “return” to the Crimea ...

But the "partners" had a chance to return again, it would seem, which had begun to think about diversifying the economy of the Russian Federation in the same direction. At the end of May, the United States published a report that Russia reduced investment in the US economy by 42 billion dollars, bringing the volume to 73 billion. According to the total volume of "investments" in the US astronomical debt, Russia was ahead of Turkey, Denmark and India. It is clear that no one specifically cut investments did not - just the case in the course of the ruble against the US currency. But it is alarming "partners." And now they are even ready to “overclock” oil, so that Russia, following the path of the Bammelnian pied pods from the CSR, will again frantically stuff a jug into dollars in volumes of interest to Washington — without a course on strategically important projects in the interests of the population of Russia itself, but with an eye to consumer loans .

Ctrl Enter
Noticed oshЫbku Highlight text and press. Ctrl + Enter
We are
The return of Kudrin, or Epitaph for a mobilization economyKudrin against Rogozin, or New revelations of the ex-minister
Military Reviewin Yandex News
Military Reviewin Google News
134 comments
Information
Dear reader, to leave comments on the publication, you must sign in.