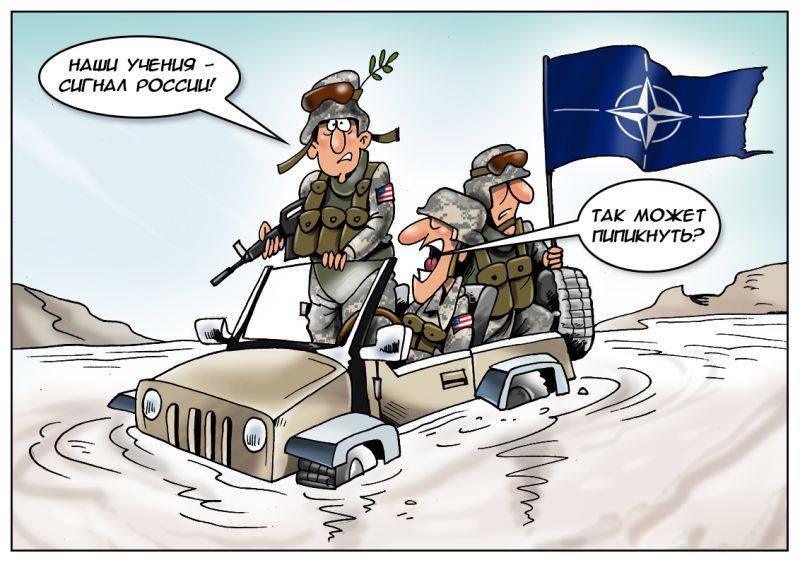 The march to Estonia of the 2-th Separate Armored Cavalry Regiment (obrkp) of the US Armed Forces called the "Dragoon March" continues. As various experts have already said more than once, this march is a big PR action designed to show the Poles and Balts the readiness of NATO troops to come to their aid and protect them from Russian aggression. Plus, the training of drivers and military equipment is also checked. It was reported that the regiment was moving in two columns, but only one route was indicated along which the military equipment was moving: the Stryker armored vehicle, howitzers, etc., which were demonstrated to the population during the stops. But the regiment crossed the border of Poland, and then it became clear that he not only moves along two routes, campaigning for his stay in NATO, but also takes part in NATO exercises along the course of movement, which are held as part of the “Sbar-2016” maneuvers ( Saber Strike).

According to media reports, in Poland, stops and meetings with residents were made in the cities of Tarnów (XNUM May), Lublin (31 June), Suwalki (1 June) and planned in Olsztyn (4 June). But already on June 9, American Strykers will appear in Latvia, i.e. Lithuania, the first column will proceed with one stop for the night, and the second column will go from Olsztyn.

Apparently, the fact is that the first stage of the international exercise “Iron Wolf-1” (Iron Wolf 2016), which are part of the “Sword Strike”, officially began on June 10 on the territory of Lithuania. The active part of the exercise is scheduled for June 2016-6. June 16 began the redeployment of units of foreign troops to Lithuania, in particular, soldiers from Denmark arrived at Kaunas airport. The transfer of troops and military equipment of the participating countries (Denmark, Germany, USA, Poland, France and Luxembourg) will be carried out by air, railways and through the seaport of Klaipeda.

It appears that the first column of the 2 obrkp will pass through Lithuania along the border with Belarus overnight at the test site in the area of ​​the town of Pabrada, where they will study up to 1,9 thousand Lithuanian military and about 400 US and Polish troops. After this, the convoy will go to Daugavpils (Latvia).

The second column of the regiment will go from Olsztyn to the Gaižiūnai training ground near the town of Jonava, where it will take part in one of the stages of the Iron Wolf exercise called the White Sword 2016. 1200 troops will be trained there from Denmark and around 1500 from the United States, Lithuania, Luxembourg, France and Germany. After that, the second column will proceed to Latvia with stops in Panevezys, Birzai and Kupiškis.

In the territory of Latvia, the first column will try to quickly go through Latgale with its predominantly non-Latvian population: on June 6 the stops in the settlement are scheduled. Daugavpils and Malta, June 7 - in Rezekne, Ludze and Varakляāni. Then it will be calmer: on June 8, stops are planned in Gulbin and Smiltene, and on June 9 in Valga - Valka, one half of which is Latvian and the other half is Estonian. The second column will pass through areas with a predominantly Latvian population, with stops in the following cities: June 13 - Bauska and Riga, June 14 - Saulkrasti, and then proceed through Valga to Estonia.

While this “journey” is being carried out, it is discovered that during the same period, the largest NATO exercise in Eastern Europe, Anaconda 2016, will also be held in Poland, also designed to “scare off Russia.” It is planned for June 7-17, about 30 thousand troops from the 21 alliance countries will take part in it (including 12 thousand Poles and up to 14 thousand Americans), as well as six partner countries of the block.

And on June 3, the Baltops 2016 exercises began, in which military personnel from 15 NATO countries, as well as Sweden and Finland, take part. The main actions will unfold in Estonia, Poland, Germany, Sweden, Finland, as well as in the Baltic Sea. It is planned to develop joint actions of the Navy, aviation and air defense, as well as anti-submarine and landing operations. The training involves 50 ships, led by the flagship of the 6th fleet US Navy Mount Whitney, 60 aircraft, helicopters and drones, and about 6,1 thousand troops.

In addition, the 6-8 of June in the airspace of the Baltic countries will be held by the Air Force exercise “Ramstein Alloy-2”, organized by the command of the air forces of NATO. The 20 combat aircraft of the German, US, Lithuanian, Finnish air forces, as well as Portugal and the UK, whose pilots are currently patrolling the Baltic airspace, will take part in the exercise. The host of the exercise will be the Lithuanian airbase in Šiauliai. Civil airfields of the Baltic countries will also be involved.

It should be noted that the number of anti-Russian materials in the Western media increased just before this series, the Commander-in-Chief of the Estonian Defense Forces wished to have the Patriot air defense system on the territory of the country, and the Ministers of Defense of the Baltic States decided to grant NATO a visa-free regime. NATO Secretary General Stoltenberg said loudly that "NATO must respond to Russia's actions with a show of force and convincing intimidation."

So, while the Poles and the population of the Baltic countries gazed at the 2 obrkp military equipment, in Poland, Lithuania and Estonia at that time there were three large military groups with strong naval support. The aviation component is not so strongly expressed, but, apparently, this was not required, since aviation can always be relocated. Each of the land groups can perform any task, even offensive, in a particular direction. If we remember what the scream was in the Western media during the Russian-Belarusian exercise “West-2013”, and compare the number of participants with what participates in the chain of NATO exercises held now, then the phrase of a boy would come to mind to the parents' bedroom: “And these people forbid me to pick a finger in the nose!” It must be assumed that the NATO headquarters have already evaluated the decision of our General Staff to transfer two brigades to the Bryansk and Belgorod regions. Now let them make the right conclusions - 2 obrkp can roll along our border, not crossing it, and provocatively concentrate troops on three directions at once is not worth it. This is not to intimidate Russia. Passed through.

Ctrl Enter
Noticed oshЫbku Highlight text and press. Ctrl + Enter
We are
What you didn't want to know about EnglandCommentary on A. Petrov's interview “Fire and Tactics in the Russian Army: Another Look”
Military Reviewin Yandex News
Military Reviewin Google News
51 comment
Ad