Attacks in Aktobe: the work of local radicals?

6 2016 June
223
In Aktobe of Kazakhstan (formerly Aktyubinsk) 5, June, militants staged a series of terrorist attacks. Now the city has a "red" level of terrorist danger. Text messages are sent to residents with a notification of the anti-terrorist operation in Aktobe. Citizens are not advised to go out without much need. 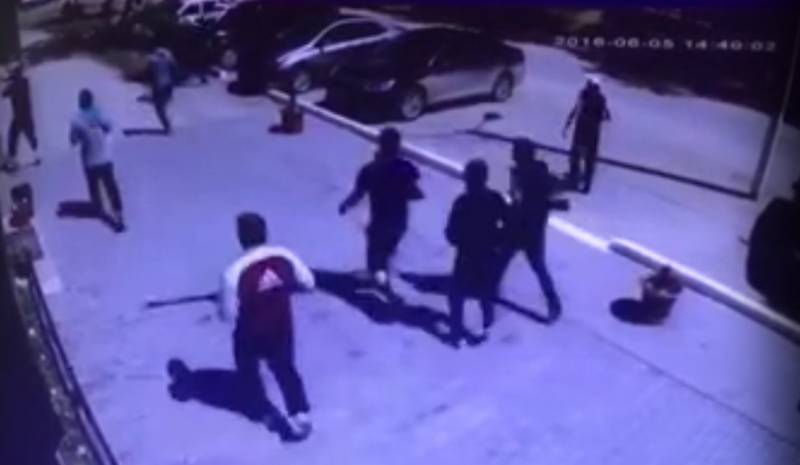 Video frame from the scene

Recall yesterday Aktobe was attacked by a group of terrorists. They committed a number of crimes: a seller and a security guard were killed in a Pallas gun shop, and then three policemen were injured. There was an attack on another store, "Panther", where militants shot a visitor, and another one wounded. In the ensuing exchange of fire with a police outfit, three gangsters were eliminated. One law enforcement officers detained.

Having captured and hijacked a shuttle bus, radical terrorists attacked the military unit of the National Guard, where they killed three soldiers and wounded six. The servicemen resisted: one terrorist was killed on the spot, another was wounded, defused and detained.

The result of the gangster attacks is sad: six killed, ten wounded. Aktobe declared a “red” (that is, the highest) level of terrorist danger. A text message has been sent to the residents with a notification of the antiterrorist operation. Citizens are not advised to go out without much need.

According to the Ministry of Internal Affairs of Kazakhstan, Aktobe was attacked by "adherents of radical unconventional religious movements."

Yesterday it was reported that the gangsters could have taken hostages, but the Kazakh Ministry of Internal Affairs denied these reports.

The speaker of the senate of the Kazakh parliament, Kasym-Zhomart Tokayev, noted that it was no coincidence that the attacks of extremists occurred on the eve of the Urazy, fasting during the holy month of Ramadan. “The terrorist attack in Aktobe on the eve of St. Oraz is a manifestation of extreme cynicism and cruelty of bandits. The most stringent measures are being taken to punish them, ”Tokaev quotes. Newsru.com.

Experts say the opposite. Or, at least, they are skeptical of the authorities' tactics.

Alexander Shirokov ("Lenta.ru") recalls a number of terrorist attacks in Kazakhstan, some of which (as well as 5 June 2016 attacks) were quite predictable, as they were carried out according to a “template plan”. Forwards, according to the analyst, as a rule, attack security officials, or arrange explosions near the buildings of government bodies. At the same time, the militants invariably manage to take the law enforcement agencies off-guard. For example, the entire 2011 year passed in Kazakhstan under the sign of terrorist attacks (militants operated in various regions).

"All история The terrorist attacks in Kazakhstan demonstrate that the authorities fail to analyze what has happened and work out an effective confrontation tactic, Shirokov writes. - Extremists act routinely, but, despite this, consistently successfully, even if they pay for it with their lives. Astana, to all appearances, does not really represent who exactly opposes it and who supports “non-traditional religious movements”. Attempts by the authorities to deny the obvious and the following vague explanations seem frankly helpless. ”

A similar opinion from a political scientist Marat Shibutov. He believes that external players were not involved in the events in Aktobe, and the sources of tension were internal. In this case, the security forces did not draw conclusions from the terrorist attacks of past years. This expert, who, incidentally, is the author of the report on terrorism in Kazakhstan in 2011-2012, told in an interview IA "REGNUM".

Political analyst explained why terrorists choose Aktobe region. First, Islam was spread there earlier less than in the south, and now there are many converts. "Namely, converts give the percentage of the most radicals," - said the expert. Secondly, in those areas the people are more belligerent, since there is a strong property difference “in incomes between oil workers and other residents”. As a result, "the historical, socio-economic and religious factors merge together and give just such a tension."

What are the mistakes of the Kazakh security officials?

According to the political scientist, they did not take into account the fact that "terrorists are changing." Hence, for example, the attack by militants of the National Guard. If the security forces were waiting for attacks on those who work against extremists - the KNB, the prosecutor's office and the Interior Ministry, as it was before, now the militants have "become much more daring." “If the units could not fight back, then the criminals could get more machine guns, then the number of victims could have been much more,” the scientist suggests. In addition, on June 5, the actions were conducted by the 2-3 group, which knocked down the coordination of the security forces. And the militants have successfully chosen the time - "Sunday afternoon, when everyone is relaxed." The political scientist notes the "increased tactical skills and experience in planning operations" among extremists. And once a part of the attackers managed to withdraw, then there are also “withdrawal plans”.

As for any "external hand" in the events of 5 June, the expert doubts this.

“I think these are purely internal processes: already from 2007-2008. we only have our own terrorists: strangers no longer go to us. So all his own, domestic production. And no conspiracy theories.

And here is another expert opinion from Kazakhstan.

"Unfortunately, this is not an accident, - leads the portal "Allau" the words of political scientist Rasul Jumaly. - In principle, it seemed so. Recall the events of 2010-2011, when there was a series of such terrorist acts, attacks, including on government agencies, the National Security Committee. Then the government was tense, some measures were taken: an updated law on religious activity was adopted, a specialized agency was created, and the special services received additional powers. There was a "pressure." At that time, many experts, including me, warned: these measures are not enough - priority was made solely on force measures, on suppression, condemnation, on prohibiting, closing down various religious sites. Experts warned that this should not be a priority. Of course, law enforcement agencies and special services should work, but priority should be given to the ideological and educational side, which was completely forgotten. Still, it is necessary to struggle not with consequences, but with causes. ”

And a few words about the reaction of residents. Radio reports it Azattyk.

“A resident of the central district in Aktobe, in a comment to Azattyk, said by telephone that the Internet was disconnected in the city; trading houses, large entertainment centers and other places of large crowds of people are closed; local TV channels warn the population about the counterterrorist operation, so they ask not to leave the house. In addition, according to her, the notice of cancellation, by the decision of the Ministry of Education, has passed the Unified National Testing (UNT), scheduled for June on the territory of two large educational institutions of the city. He says that residents of Aktobe received SMS messages on the establishment of a red level of terrorist danger in the city. ”

So, from the scant reports of the Kazakh Ministry of Internal Affairs, it is clear that not all the criminals are currently detained: some managed to escape. How many of these hiding and whether they are armed is unknown. The "red" level of terrorist danger in the city remains.