8 2016 June
32
1936-1939 events In Spain, in Soviet historiography, for many years they were viewed as the “national liberation war of the Spanish people,” but it is obvious that this is not true. It was just that a clash between the forces of democracy and the forces of totalitarian regimes occurred, and all this happened in an extremely backward, in fact, semi-feudal, peasant country, with a patriarchal mentality that had entered the consciousness of the masses. And - yes, it was the real “dress rehearsal” of the future war, where its techniques and tactics were worked out. 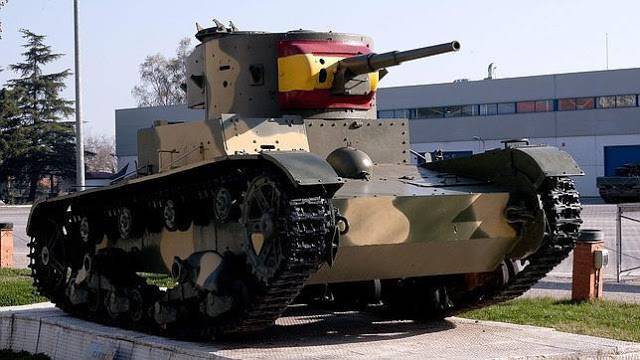 T-26 - "the most significant Soviet tank" of the Spanish war. Tank Museum near Madrid.

This aspect of the war in Spain was also known in the era of the USSR! But ... was given without much detail. True, the Navy was lucky, as Admiral Kuznetsov told in his memoirs about the actions of the Spanish Navy in sufficient detail, and then also published a number of analytical articles on the same topic. By aviation It seems that there was also a lot of information, but only until recently they were much “spread out” in various publications. Tanks were the least fortunate. And it’s clear why. Our planes were good, but the German ones were better! Who's guilty? Constructors! But tanks ... tanks were out of competition throughout the war. Therefore, I did not want to tell our participants about their mistakes at all. Nevertheless, there is information about tanks in Spain and why don't we get to know her from various sources?

However, it immediately becomes clear that the exact number of T-26 and BT-5 sent to Spain is unknown. Historians abroad tend to exaggerate figures, ours, on the contrary, usually underestimate them.

For example, in the monograph "T-34" I.P. Shmelev says that the Spaniards sent a 362 tank from the USSR, or — even less — 347. But, for example, such a Spanish historian as Rafael Trevino Martinez gives other figures: T-26 tanks near 500 and 100 BT-5, and all this without taking into account different BAs.

The fact that tanks were 362 was also written by Raymond Surlemont, a French historian of BTT, in the Armorek magazine, but added that in addition to tanks of the USSR, he sent FAI and BA-120 / BA-3 armored vehicles to 6 Republicans.

Hugh Thomas is a well-known English historian, whose monograph has been published several times and is supposedly the most objective study of this topic in English-speaking countries. He generally writes about Soviet tanks 900, plus the BA 300 to them. He gives the following table.


149 Tanket CV 3 / 35 Fiat Ansaldo and ... 16 BA Lancia Ansaldo 17М model 1917 g. Came from Italy, and 5 tanket shoes arrived in Spain 16 August 1936 of the year, armor 22 of December. September 29 sent another 10 tanket, 3 - with flamethrowers. Only at the end of October, 1936 of the year managed to form a full-fledged company of mixed Italian-Spanish crews, which was shown to General Franco on October 17 at a military parade. These “tanks” went into battle on October 21 near the town of Navalkarnero. Republicans defending him, seeing the "tanks", immediately retreated. But the Italians lost one tankette, but they were very proud of their success, so they called this part “Navalkarnero”! October 29 these tankety for the first time met with our T-26. The result was a tank duel of our tank with a cannon and Italian wedges with a machine gun and flamethrower, commanded by officer P. Berezi. Of course, the T-26 hit it with a direct hit, and its crew died. The second wedge was heavily damaged, but the T-26 was seriously damaged by nationalist artillery shells. All in all, the Italians lost 1936 vehicles during the autumn battles for Madrid in 4, three people were killed, 17 were wounded and one was missing. Then 8 December 1936 received another replenishment from Italy in the number of 20 machines.

It turned out that Soviet tanks hit the Italian with the first shell that hit them. Therefore, they began to be used as “fast units” (just like today's parts of “quick response”!), And this turned out to be justified. That is, they were sent to where our tanks were not and it was there that they delivered unexpected blows. So, with their help, the nationalists occupied Santader, and in the spring of March-April 1938 fought heavily in the Montenegrin mountains. In July, 1938, reinforced by the German 37-mm guns of the RAK-36, these tankettes were able to break through the Republican front of Teruel and then move forward more than 100 kilometers! 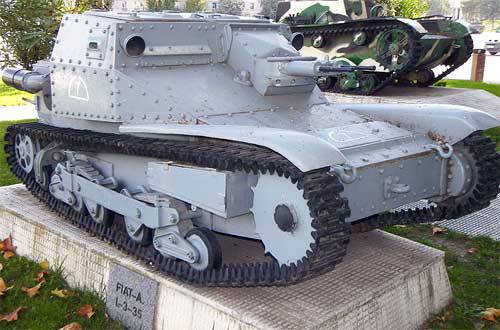 And on this could fight and win?

In December 1938, the 32 wedges were delivered from Italy to the nationalists for the last time. Now the tank unit, which belonged to the Italian Expeditionary Corps in Spain, became known as a regiment, as part of the headquarters, two battalions of tankettes, each of which had two companies. One battalion tankettes had Spanish crews. In addition, there was one motorized battalion, a company of armored vehicles, a company of reconnaissance-motorcyclists, and a company of Bersaliers. The regiment still included a battalion of Orditi, a battalion of anti-tank guns, armed with 65-mm mountain cannons and German RAK-36. This included the 47-mm and 45-mm captured guns.

In December, 1938, the regiment fought in Catalonia, where the battles once again led to the breakthrough of the Republican front. Now the resistance of the Republicans weakened before our eyes, but the gravity of the situation was successfully compensated by the republican press. 17 January 1939 of the newspaper reported on the heroic deed of Corporal Celestino García Moreno, who near the town of Santa Coloma de Queralt met with Italian tanks 13 and blew up three hand grenades. Then he took the pickaxe, broke the hatches on them and captured all five tank crews. And the remaining 10 machines at the same time immediately fled! On January 26, Franco tanks entered Barcelona, ​​and February 3 1939, during the storming of the city of Girona on the French border, the Italians lost their last wedge. Actually, on the border they were February 10, where CTV captured 22 Republican tanks, 50 cannons and more 1000 machine guns! On May 3, Italian tanks paraded in Valencia, and on May 19 in Madrid, which, of course, filled the hearts of the tankers with pride. However, the loss in 56 tankety hardly speak about their high quality. Although, yes, all the memoirists say that their motto: “Quickly to victory”, they justified, that is, they drove really fast and ... anyway, they were forced to retreat the Republicans.

"Condor Legion" 9 T-I tanks received at the end of 1936 of the year, then 32 tanks were delivered in mid-September. The Legion’s tank group was called the Dron tank group. Lt. Col. Wilhelm Ritter von Thom commanded her. The group consisted of a headquarters, two tank companies, of three sections each. In the section there were five line tanks and one commander car. Parts of the support included the transport section, field repair workshop, anti-tank and flamethrower sections. Von Thom noticed that "Spaniards learn quickly, but also quickly forget what they have learned." Because of this, in the mixed German-Spanish carriages the Germans were in charge. 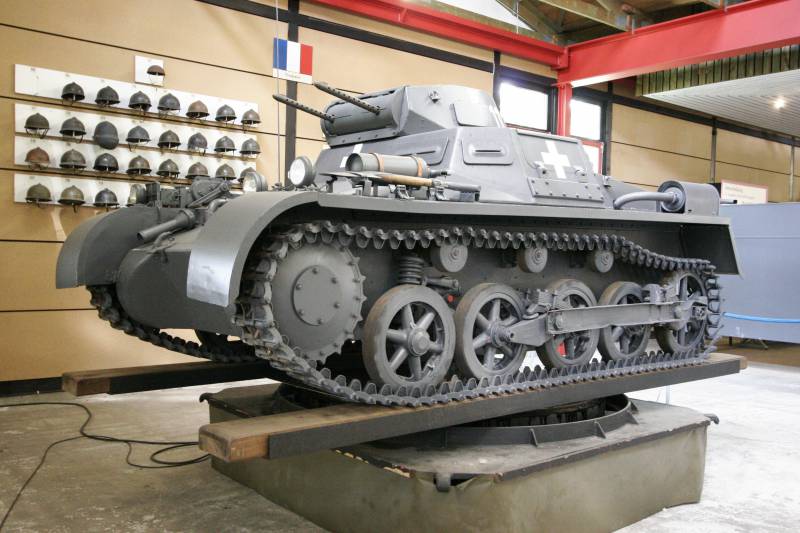 An impressive and formidable car, isn't it?

The weakness of the T-IA showed already in the very first battles, and since December 1936, the tanks of T-IB have gone to Spain. By 1938, the German tank units numbered the 4 battalion, each of the 3 companies and 15 tanks in each company. 4 companies / 60 tanks / were made up of captured T-26. For the capture of the T-26 tank, the nationalist command was giving the 500 pesetas an award — the American pilot’s monthly salary from the Republicans (and the Soviet “Stalin falcons” were paid less than everyone else!), And our Moroccans, for whom there was a lot of money. They were Muslims! They did not drink wine, did not play cards, and all the “earned” money, like modern migrant workers from Central Asia, were sent to their families. And it’s clear what a real Russian tank was for them. Well, in the end, the nationalists got trophies ... 150 T-26, BT-5 and BA BA-10 tanks, and these are only the machines that they were able to repair and then use in my army. In fact, the USSR laid the foundation for the Franco tank park, that's how it is! 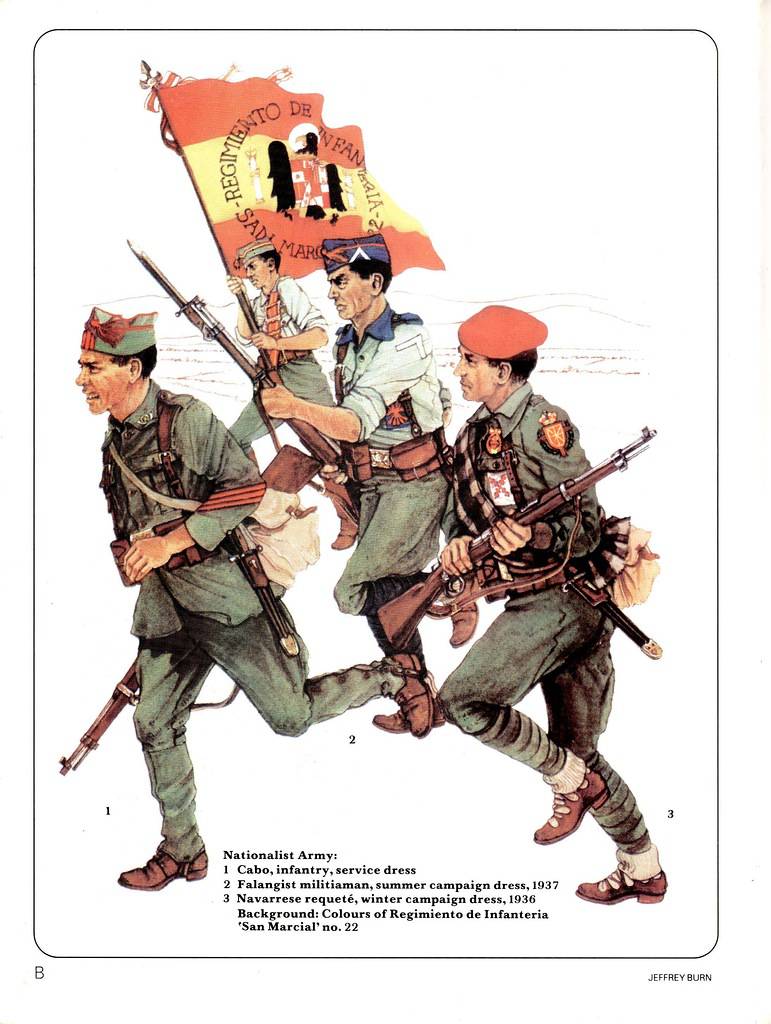 An interesting paradox: the army is no more miserable, the brighter the uniform is in it, and there are more “gadgets” in it.

The Germans in Spain were completely independent and, in fact, did not submit to the Spaniards, but only coordinated their actions with them. There was a case when Franco demanded that von Toma send his tanks to attack along with the infantry "in the usual manner of generals belonging to the old school," to which he replied: "I will use tanks without spraying them, but concentrating" and Franco wiped! And in his company he had 15 tanks, and in total there were 180 machines. But only in Catalonia, the Republicans had before 200 Soviet tanks and BA. And so you think? The command on the Catalan front viewed the T-26 as ... unnecessarily heavy and in addition as not sufficiently effective! 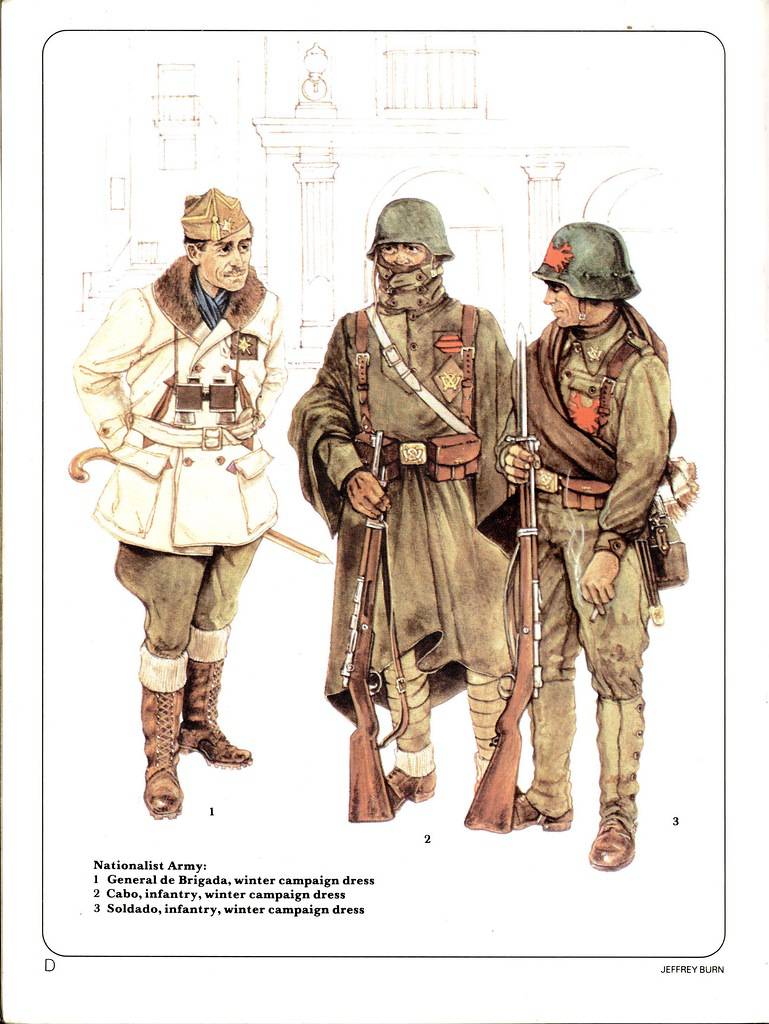 In winter, the main thing for a soldier is to warm up!

The question arises: what other efficiency did the Spaniards need from Soviet cars, if T-IA and T-IB, and the CV 3 / 35 did not have guns, and ours had them? The domination of Franco's aviation, which allegedly led to great losses for the Republicans, cannot be sufficiently established. If the nationalists spent up to five hundred bombs on one destroyed pontoon bridge on the Ebro River, how many bombs did they spend on one destroyed tank? And then on the critical days of November 1936, the T-26 and the I-15 and I-16 fighters dominated Spain both on the ground and in the air! 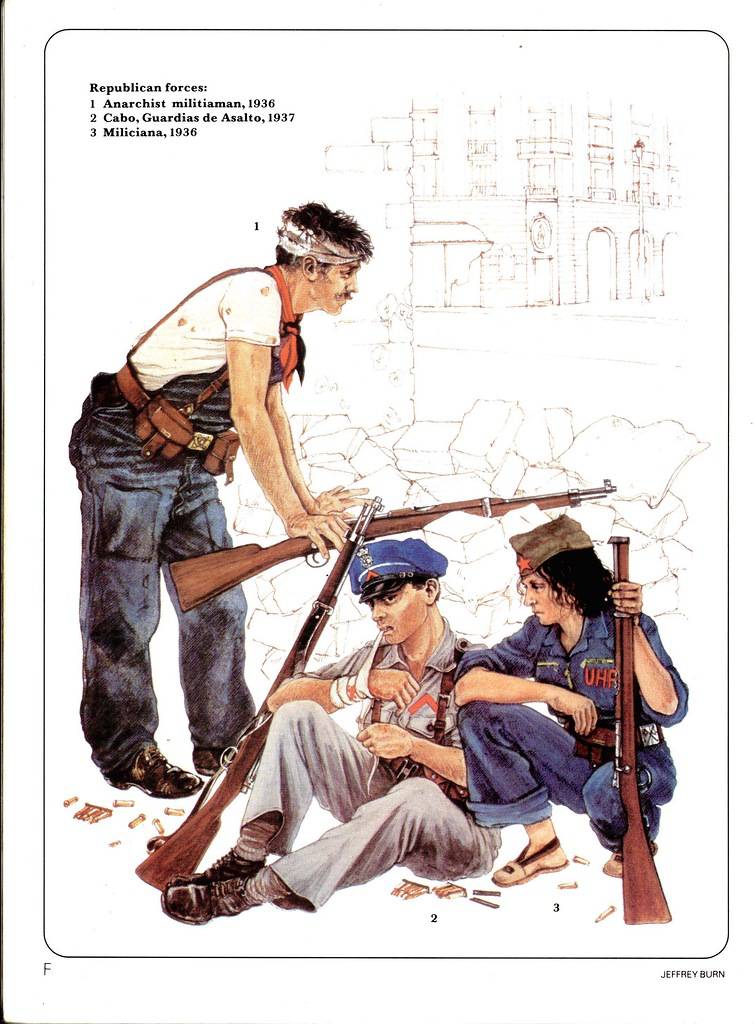 But many Republicans fought in the "jeans"!

Obviously, the Republicans simply ... did not know how to fight properly! That is, the most important reasons for the victory of the nationalists were combat training, discipline and professional command. So M. Koltsov in the book “The Spanish Diary” repeatedly wrote that the nationalists had special sergeants assigned to shoot the retreating and cowards, that they had machine guns behind the infantry. But General Enrico Lister also ordered the shooting of his soldiers in case of retreat. Republican sergeants even had the order to shoot the officers who commanded the retreat without a written order from the headquarters. “Anyone who makes a loss of at least an inch of land will answer for this with his head,” so Lister addressed his troops, and still it did not help, the Republicans suffered one defeat after another. On the other hand, perhaps the Soviet military advisers were simply not listening there? “A large number of Russian officers in Aragon are putting Spanish soldiers in the position of colonized Aborigines,” said a telegram from the headquarters of the Aragon Front to the Minister of War of the Spanish Republic, and this example of attitude towards us is not at all isolated. And one wonders, where is the gratitude? And elementary! Interestingly, no one said anything to the American pilots and volunteer officers from England, the USA and Canada, and they paid their salaries more than ours! Probably too our ceremony with them! And they would say directly: without our tanks and airplanes, you are all here “zero without a wand” and, you see, they would understand their place. And then everything is “fraternal solidarity”, “proletarian internationalism”, “international assistance”, and that’s how the Germans had to be ... “and you went!”