The war for the spirit. The revival of the swastika in Ukraine. 3 part 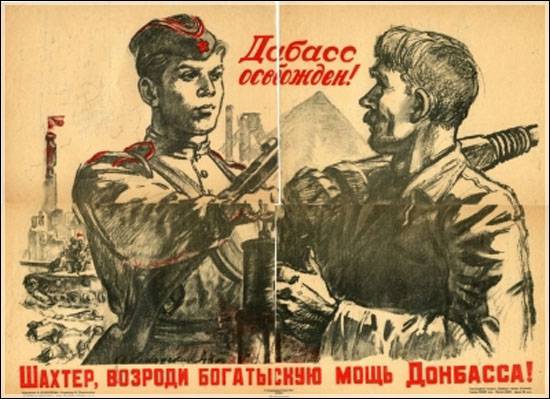 29 June 2015, the President of Ukraine Poroshenko, opened in Lviv a monument to Andriy Sheptytsky, the Metropolitan, who wore a swastika and personally sent several letters to Hitler and Himmler with congratulations. This is how the new government revives people who are stained with blood.


The first Sheptytsky monument was erected during his lifetime, in 1935 year. It is noteworthy that after the arrival of the Soviet government, this monument continued to stand, and the decision to demolish it was made only after the end of World War II, after the discovery of all the atrocities committed by the metropolitan.

This is what Poroshenko was talking about, looking into the text written in advance: “Sheptitsky is in the gold reserves of Ukraine. Such people are expensive for the nation. He created the national prototype of modern Ukraine. Before the Metropolitan, Ukraine was divided between its neighbors. Move stories do not change. Empires fall apart sooner or later. And the power of the human spirit, the power of truth, the power of faith lives forever. In his life, he showed that idols are falling. This is the best monument to the lord in the country, which strides towards the family of European nations. ”

But what the story says.

The end of the union is connected with the names of Count Andrey Sheptytsky and Joseph Slipyy, the last two Uniate metropolitans. Sheptytsky became the head of Uniates before the First World War. It seemed that nothing foretold that the officer of the Austrian cavalry would become the spiritual leader who would revive the Uniate monastic order of the Basilians, openly bless the Austro-German troops during the First World War against the Russian troops. But everything was decided by an unfortunate fall from a horse, after which he decided to become a priest.

A remarkable fact. He collected gossip and fake photos of the royal family, then distributing them along the lines of his agents: low-quality photos of Rasputin walked around with his hands surrounded by the court ladies. Gossipers claimed that these are maid of honor, or even the empress herself. People believed in what they were forced to believe in: reality was replaced by sophisticated fantasies. Sheptitsky was engaged in collecting rumors about the Russian imperial family with enthusiasm, knowing full well that in this way he could somehow undermine the attitude of the lay people towards the royal family.

One of the agents of Sheptytsky in 1914 said that the Metropolitan ordered him to spread the following rumor: "The Russian sovereign lived with the maid of honor before marriage, and afterwards with Rasputin." Here, it turns out, what the Metropolitan was interested in.

It is therefore not surprising that when Lviv was occupied by Russian troops, and the Sheptytsky archive with offensive photographs and other documents testifying to active intelligence work in favor of Austria, Sheptytsky was arrested as an Austrian agent. Nicholas II, after reading the ideological appeals of the metropolitan to create a separate state, wrote on his report with his own hand: “What a bastard!”

He was released by the Provisional Government and immediately established cooperation with Pilsudski, which he began to serve faithfully.

Sheptytsky flirted with the Ukrainian people with the help of his Pharisee "philanthropy", which for him, the archimillionaire, was not the slightest burden, and he did not hesitate to openly ask the government of Pansky Poland to "lower the punishing hand" on the advanced people of Western Ukraine. On the instructions of the Vatican, which were transmitted through the Vienna Cardinal Innitser, Sheptytsky with all his strength, materially and morally, supported the Western Ukrainian nationalists.

“Ukrainian nationalism must be ready for all kinds of means to combat communism, not excluding mass physical extermination, even if it sacrifices millions of human existences,” he said.

“Extermination” is, quite simply, destruction. The main Uniate organ, therefore, called for the extermination of millions of human lives ("existences").

"The Lions of the Alcazar" he called the German-Italian fascists who invaded Spain.

He laid the most serious hopes on Hitler Germany and began to openly bless her as soon as her criminal war against the Soviet Union began. He incited believers in his pastoral letters to "pay attention to people who sincerely served the Bolsheviks." It seemed to the top of the Uniate Church that the time was close, which she spoke about in 1940 year when she wrote to her clergy: “God will send mercy to many of us to preach in the churches of Great Ukraine, right and left bank, right up to the Kuban and the Caucasus, Moscow and Tobolsk ”(V. Rosovich (Y. Galan)“ Scho take Uniya ”, Lviv, 1946 Year, p. 38). One might think that the author of this Uniate Circuit led the shadow of the Jesuit Jacob Reitenfels, who in the seventeenth century dreamed of penetrating papal agents to distant Tobolsk and developed a special instruction for conducting intelligence in Russia. This became known in 1906, when letters were sent in 1674 to the Vatican who lived in Moscow for two years as a secular Jesuit of Courland Jacob Reitenfels. He proposed the most convenient ways of organizing papal intelligence in Russia. In order to find out more information needed by the Vatican and gradually achieve the possibility of openly spreading Catholicism in Russia, Reitenfels advised to send there intelligence missionaries under the guise of merchants with the strictest conspiracy. They should settle among the Russians and lead the company with everyone who could give information. But each time these actions came up against tough oppositions. Russian counterintelligence was not asleep.

But back to Sheptytsky.

After the occupation of Ukraine truly his finest hour comes. The rapid rise of Sheptytsky's career comes at a time when thousands of innocent people are shooting, torturing and destroying German fiends.

Still would! He can not only accept all the conditions of existence of the Hitler regime, but also send a personal greeting to Hitler on the occasion of the occupation of Kiev, and heartily congratulate him on mastering the capital of Ukraine. And at the end to put a signature: "With deep respect, Andrew, Count Sheptytsky, Metropolitan."

In 1941, a black swastika appeared on Sheptytsky's black clothes. And archival photos testify to it. 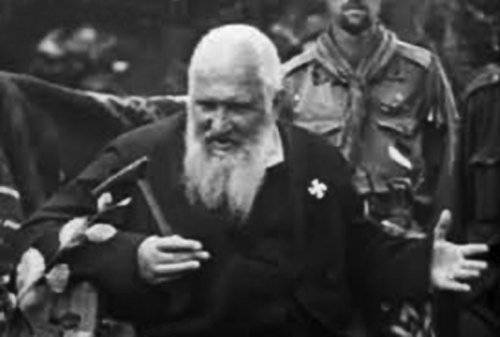 In the same period, he meets with the leadership of Ukrainian nationalists, in particular, with Stepan Bandera. And gives his consent to the murder of the Red Army. And also to the fact that local priests were trained in German training camps. 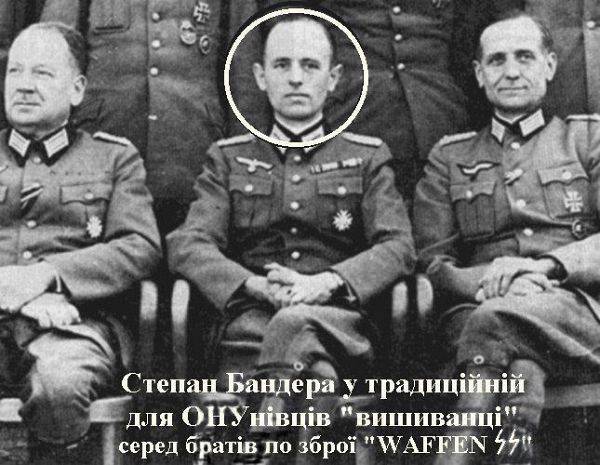 30 June 1941, the nationalists announced the creation of a Ukrainian regional government headed by Stetsko, who received the blessing of the Metropolitan.

The new order was that the nationalists first of all massacred the Communists, Jews, and representatives of the Soviet and Polish intelligentsia. According to various estimates, from three to five thousand people were hanged and shot, among whom were dozens of prominent figures of science and culture, including academicians, professors of the University of Lviv.

5 July 1941, Sheptytsky addressed the laity with a message in which he urged everyone to be obedient to the new regime: “By the will of almighty God, a new era begins in the life of our country. The German army, which has occupied our entire land, is welcomed with gratitude and joy. ”

A little later, he appealed to the clergy with the requirement to always carry the banner of the German army prepared in advance.

There is evidence that Sheptytsky saved several Jews from being shot. But at the same time he was actively campaigning for the departure of the able-bodied part of the Ukrainian population to Germany. “Being in a foreign land in some way will benefit you and benefit. Learn a foreign language, learn the world and people, gain life experience, get a lot of knowledge that can be useful to you in life ”- these are few lines from the spiritual mentor’s fiery propaganda speech with a swastika on his chest, turned to the younger generation. But he was believed and left with the hope of a bright future promised by the metropolitan. Only instead of light, people saw deadly darkness: few managed to survive after bullying, beatings, torture. But the metropolitan did not want to know about it. In his musty fascist little world, other values ​​were created that were actively introduced into the masses. And people continued to believe, although many of them refused to obey, seeing hypocrisy and lies.

14 January 1942, several Ukrainian nationalists sent another letter to Hitler. And the signature Sheptytsky was the first. In the letter, they called upon the new authorities for closest cooperation, "in order to combine the combined forces against the enemy and implement the new order in Ukraine and throughout Eastern Europe." 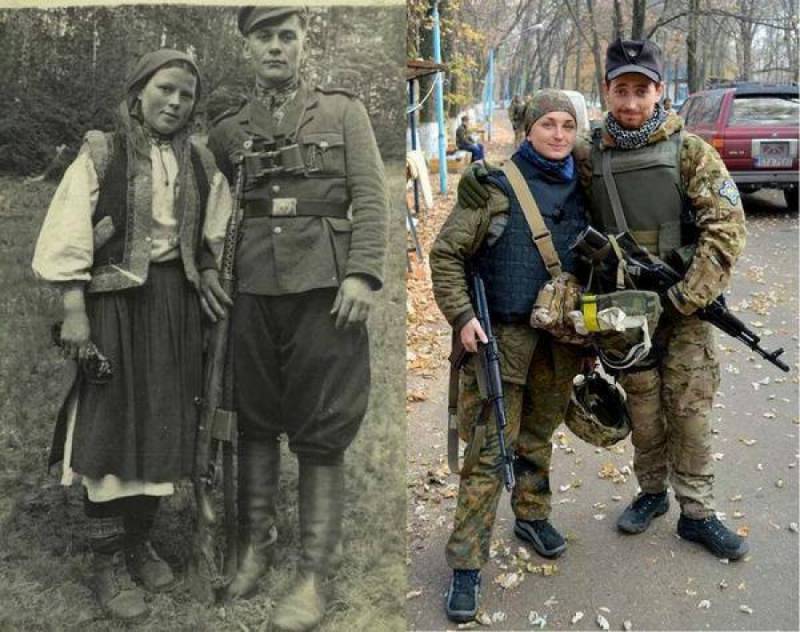 This order was taken to direct and preserve a specially created division of the SS "Galicia", the 73 anniversary of whose creation about a month ago was noisy celebrated in Ukraine. The new division was called on the initiative of Himmler, Galician, not Ukrainian. 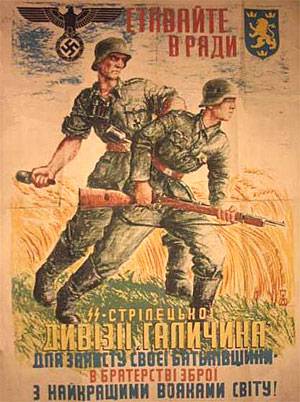 It was important for the Germans to emphasize that they did not support the idea of ​​the independence of Ukraine. The language for giving orders was German, the division commanders were also Germans. Each division soldier swore an oath to Hitler, not Ukraine.

An archival photograph has been preserved, where the metropolitan blesses the soldiers of the SS division “Galicia”. 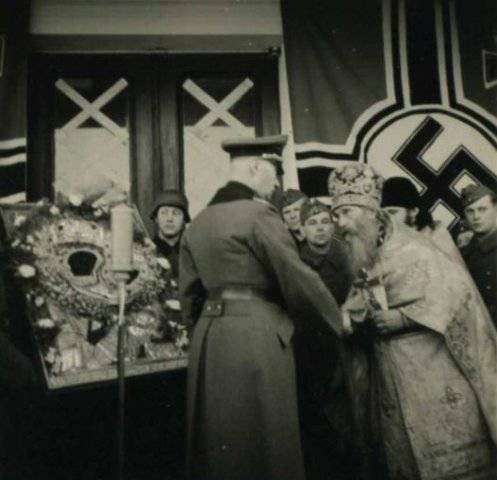 The Nuremberg trial recognized all those who were part of the SS as war criminals. Today in Ukraine, these international court decisions are being trampled. Perhaps over time, a similar process will be organized over those who today burned and killed civilians. Is needed. This process is very necessary. It is necessary to judge harshly and fairly. Sooner or later. The court of history is already underway.

In August, 1942, Sheptytsky even blessed his flock to work on holidays and entrance days in the name of the German army.

It got to the point that Sheptytsky expelled to the exalted, prone to mysticism and prophecies of the Führer, his prophetic visions: as if he saw in white robes young Basilian nuns who told him about Hitler’s imminent victory.

But they did not succeed: under the blows of the victorious Soviet troops, Hitler's Germany was defeated. 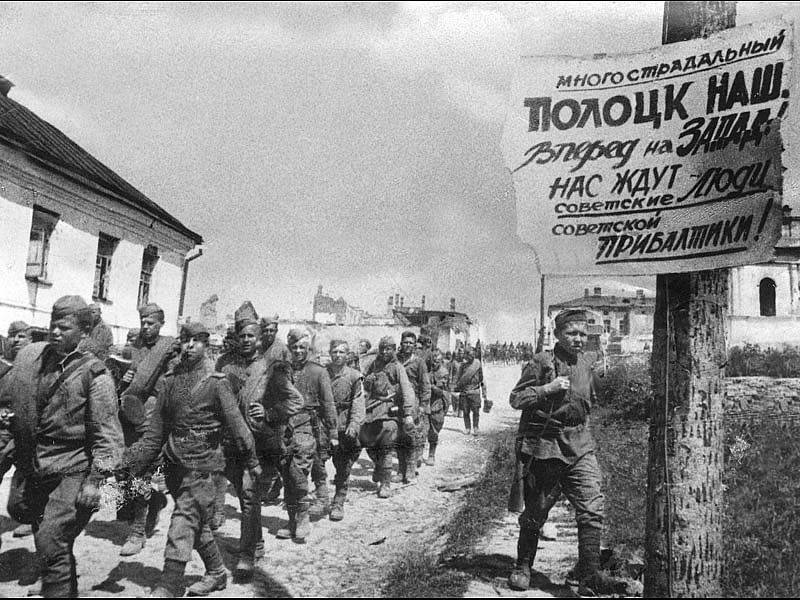 The decrepit Sheptytsky happened to live to its final defeat. He even tried to write a letter to Stalin, but, they say, it was not sent because the nationalists, whom he fiercely condemned, deprived him of his life prematurely.

After him, Joseph Slipyi became the metropolitan.

Together with Sheptytsky and his closest assistants from the Uniate bishops, Slipyi during the Great Patriotic War secretly served the German occupation regime, calling on believers and the clergy to resist Soviet power, and after the invasion of the German fascist invaders into Ukraine, he completely surrendered himself to the occupants: as the leader of the numerous Uniate clergy he with his orders and promises to the believers helped the Nazis to steal the population in fascist penal servitude, participated in the creation of the occupier Sgiach local authorities in the extortion of food for the German army, in the formation of the Ukrainian population of the SS division "SS-Galicia" to fight the guerrillas and the Soviet Army, with postings in this division Uniate priests as chaplains. Sheptytsky did the same thing.

In 1946, the 350-year term of the Union of Brest was discontinued. Only in 1990, did the shoots of the Greek Catholic Church begin to reappear in Ukraine, which the new authorities clung to today. Or vice versa…

Ctrl Enter
Noticed oshЫbku Highlight text and press. Ctrl + Enter
We are
The Germans went around the system, looking into his mouth and pulling out gold crownsOlympiad in the claws of the swastika
Military Reviewin Yandex News
Military Reviewin Google News
24 comments
Information
Dear reader, to leave comments on the publication, you must sign in.