6 2016 June
92
Modification of the main combat tank The T-72 for street fighting was first introduced by Uralvagonzavod Corporation abroad. The debut of a combat vehicle designed for fighting in urban areas took place at the KADEX-2016 exhibition in Astana. As noted, interest in the new version of the T-72 tank, which was first demonstrated back in 2013 during the RAE-2013 exhibition in Nizhny Tagil, significantly increased after studying the experience of military operations in Syria. The source of the “Lenta.ru” publication noted that the T-72 tank in Syria showed outstanding mechanical reliability and survivability even in its original form, and with the installation of new equipment on a combat vehicle, the tank’s capabilities will increase significantly.


At the same time, the source said that there were no orders for a new tank yet, but there was great interest in it, and negotiations are currently underway to purchase it. The T-72 version for urban combat differs from conventional T-72B3 tanks with a heightened level of protection, it includes on-board screens with dynamic protection, additional booking, and anti-cumulative grids. In addition, additional protective screens appeared on the turret of an anti-aircraft machine gun. Also, the combat vehicle acquired a bulldozer blade, which makes it easier for the tank to overcome the debris and barricades on the streets, also providing an additional level of protection in the frontal projection.

Tank T-72 is a business card of the Uralvagonzavod (UVZ). The development of this tank began in 1967 year. The Soviet Army T-72 "Ural" was adopted 7 August 1973. The tank was manufactured from 1974 to 1992 years at Uralvagonzavod and the Chelyabinsk Tractor Plant. In the period from 1974 to 1990, only in Nizhny Tagil, the 20 544 of the T-72 tank of various modifications was released. In total, about 30 thousands of such combat vehicles were produced. This tank is still in service with the Russian army and the armies of many countries of the world. The existing reserve for the modernization of the MBT makes it possible to increase its combat capabilities so that it meets modern challenges. 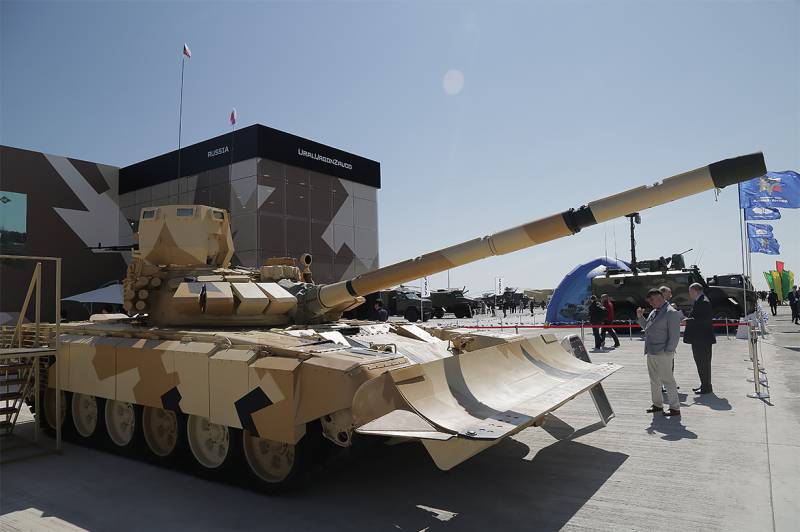 It is worth noting that at the KADEX-2016 exhibition, two main “nails” of the program were presented - the Kazakhstani Barys armored personnel carrier with the 8х8 wheel formula, equipped with the AU-220М combat module with the 57-mm automatic gun manufactured by Uralvagonzavod and the main battle tank T -72 with upgrading kit for urban combat. The combat module with the 57-mm automatic cannon is remotely controlled. The shot of such a weapon currently cannot withstand any of the existing infantry fighting vehicles in the world.

According to Oleg Viktorovich Sienko, General Director of the UVZ, the T-72 tank modernization project seems to be of higher priority, which is dictated by world events of recent years. The conflict zone, unfortunately, is expanding, and domestic technology is actively involved in them. The events that are taking place today in Syria clearly confirm the relevance of tanks in urban fighting, and the modernization kit from UVZ is designed to increase their reliability, as well as increase the combat capabilities of the T-72. A variant of the modernization of the T-72 tank for street fighting is the initiative development of the UVZ. Work on this project is carried out outside the framework of the official OCD. Currently, the tank is being tested. The Russian military, of course, is aware of all the work on this project.

Due to the availability of a modernization kit for urban combat from the Russian corporation Uralvagonzavod, the states that have the main battle tank T-72 in service can not worry about what they need to do with outdated equipment and the transition of main combat operations from the expanses of fields to urban conditions modern cities and urban agglomerations. According to Vyacheslav Khalitov, deputy director of special machinery for UVZ, this project was developed based on the experience of urban battles in Syria. He spoke about this in an interview with the Gazeta.Ru journalists before the KADEX-2016 exhibition, which was held in Astana from 2 to 5 in June of 2016. 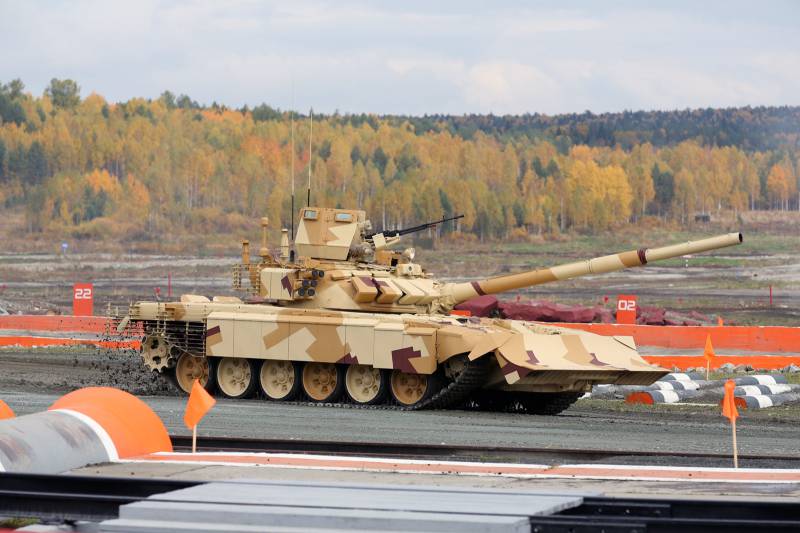 “If we carefully analyze the latest armed conflicts in the world, it turns out that fighting is conducted mainly in cities, no one today is fighting in open areas, because it is, in fact, instant destruction,” said Vyacheslav Khalitov. At the same time, fighting in the city and urban areas can be quite successful. Therefore, the UVZ, taking into account the experience of fighting in Syria, the war in Iraq and conflicts in the Middle East in general, came to the conclusion that it was necessary to develop a special set of additional protective equipment that could be installed on a tank if necessary in order to more effectively to fight in the conditions of the city.

This modernization option is also needed to give the T-72 tanks a new life. First of all, it is proposed to increase their firepower: install an upgraded 125-mm cannon 2А46М, an automatic loader modified for firing missiles, a more effective fire control system (FCS) with a multi-channel gunner Sosna, as well as a new stabilizer with an electromechanical drive. As a result of the installation on the tank of the new MSA, the commander of the combat vehicle and the gunner-operator will be able to confidently hit all sorts of targets with fire from a cannon and a machine gun, as well as launch guided missiles at any time of day and in all weather conditions.

Separately, you can highlight the dynamic characteristics of the tank. It has a new engine, which develops the power of the 1000 HP. and the automatic gear shift, exactly the same, which stands on modern tanks T-90C. Also, the new "urban" tank received tracks that are adapted for the installation of "asphalt shoes". Modernization of the T-72 tank for urban battles also implies the installation of a powerful TBS-86 bulldozer blade on it, which is intended for parsing barricades, debris resulting from the destruction of buildings and structures, pushing damaged equipment off the road. Among other things, it also creates additional protection in the frontal projection of the tank hull. 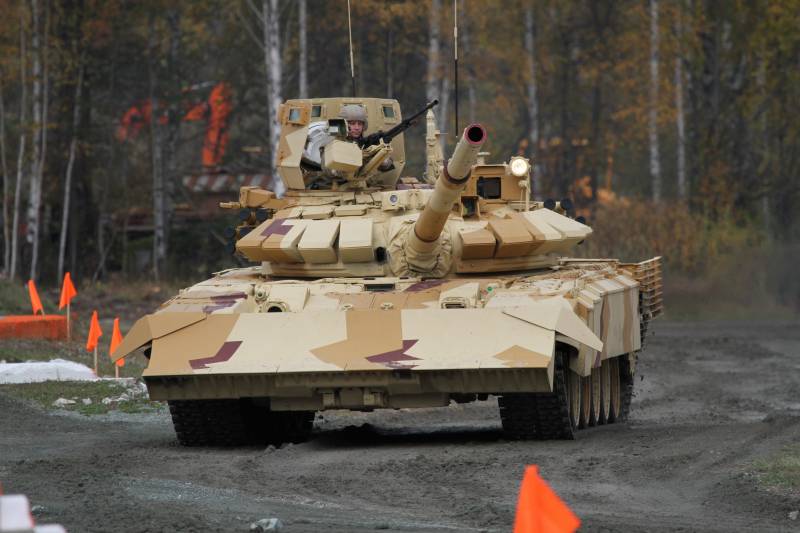 But the greatest attention was paid to the protection of the tank and its crew. In terms of protection, UVZ specialists propose an integrated approach. So to protect the commander of the combat vehicle, who had to look out of the hatch during the battle, in order to fire from an anti-aircraft machine-gun installation, something like a cockpit appeared on the upgraded version of the T-72 tank. Before that, looking out of the tank, the commander was open on all sides, getting hit. The deputy chief director of the UVZ noted that the enterprises had made this cabin with windows in order for the commander to have a circular view, but he himself was covered from all sides, booking there was mostly bulletproof. Viktor Murakhovsky, an expert in the field of armaments and military equipment, explained in an interview with Gazeta.Ru that, in fact, this means that something similar to a birdhouse is being built on military equipment - from above they install armored protection with observation windows, loopholes around a tanker or an infantryman. Such protection put all the armies that take part in urban battles.

According to experts, the tank itself from all sides will be equipped with dynamic protection modules (DZ), which will close the tank body in front, behind, from the sides, above the track shelves, and also cover its tower. In addition, special lattice screens will be installed on the tank, which will be placed above the track shelves in the area of ​​the engine compartment and will cover them with aft, providing additional protection against cumulative ammunition, said Vyacheslav Khalitov. Also on the tank will be installed special equipment designed to suppress the channels of various radio-controlled explosive devices. This will be a kind of element of electronic warfare, which will protect the tank in a modern "high-explosive war." According to Khalitov, these EW funds will also prevent the ammunition flying towards the tank to hit it. “At present, militants are increasingly using radio-controlled projectiles, it is necessary to extinguish their signals in a very wide range, which is especially important in the conditions of urban development,” the specialist emphasized. The system for suppressing radio-controlled explosive devices is two inconspicuous, antenna-like devices located behind the tower. 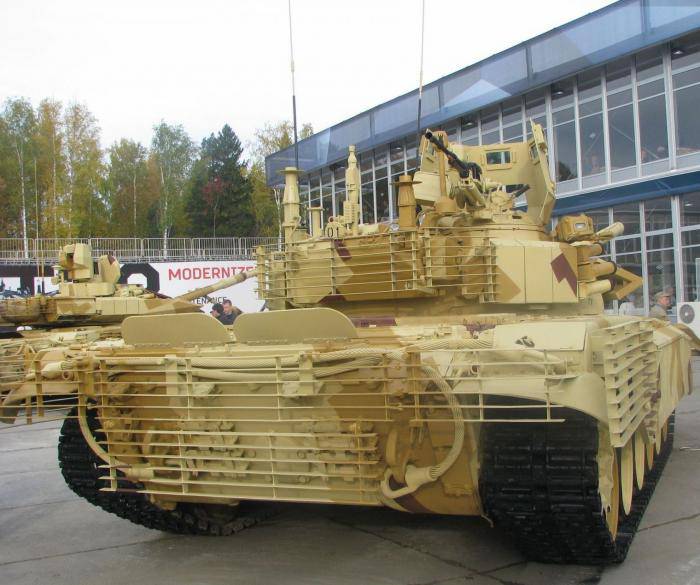 Murakhovsky notes that the special conditions of the fighting in the city force the designers to make various improvements to the existing and created armored vehicles, primarily from a technical point of view. “Firstly, shelling is possible in the city from virtually any direction, not just from the frontal projection, as it could have been in a battle in the field. Secondly, the city requires large elevation angles. weaponsin order to confidently fire on the upper floors of buildings and structures, suppressing the enemy firing points. Thirdly, the best review conditions are necessary for those who work with weapons systems - a round review should be better. In Israel, for example, on the roof of the tank are on 2-3 additional machine guns that are designed to defeat the enemy, which is located on the upper floors of buildings, "- said Victor Murakhovsky. He also underlined the fact that armored vehicles protection sets in the context of urban battles are also being made in the USA and Germany for their main battle tanks Leopard 2 and M1 Abrams.

It is no coincidence that the upgraded version of the T-72 tank was presented for the first time abroad in Kazakhstan. Apparently, the fact that at one time the Kazakh army was the only one that acquired and armed with the Terminator tank support vehicle, created on the basis of the T-72 tank, is having an effect. This Russian-made BMPT is armed with a pair of 30-mm automatic guns 2А42, two launchers with supersonic Ataka-T anti-tank missiles, and also two 30-mm automatic grenade launchers AG-17D and a PKTM machine gun with a 7,62-mm caliber. The combat vehicle is able to recognize small targets even at large distances, while the MSA installed on it allows it to be done in any weather and at any time of the day.

Ctrl Enter
Noticed oshЫbku Highlight text and press. Ctrl + Enter
We are
The action “Military service under the contract is your choice!” In Rostov-on-Don: future contract servicemen, exhibitions and “Russian Knights”T-72B vs M1A2 "Abrams"
Military Reviewin Yandex News
Military Reviewin Google News
92 comments
Information
Dear reader, to leave comments on the publication, you must sign in.