Peace at the Minsk Pause ...

6 2016 June
44
When Washington organized the “euromaidan” in Kiev, Henry Kissinger, the former US Secretary of State and the recognized “American sage”, looking at the Kiev “regime change”, said: the Russians understood that we would like to arrange in Moscow ...


Putin called what is happening in Kiev "pogroms", and a little later, dryly remarked that Washington acts in Ukraine "unprofessionally." What did he mean? 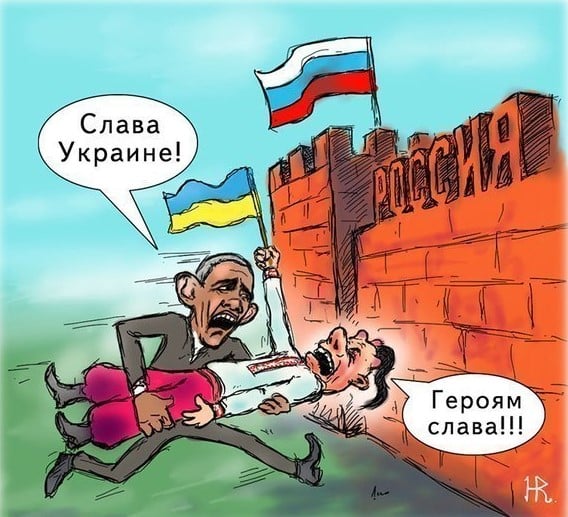 Given the context of his statements on the coup d'état in Kiev, Putin most likely hinted that Washington hurried, forcing, blowing up the situation in Ukraine over the contrived "euro-association" of Ukraine. Indeed, before the end of the presidential term of Yanukovych, there was less than a year ...

But then, what strategy of Washington in the post-Soviet space would be the right one to promote “US leadership”? The main focus would be on organizing a coup in Moscow, as in Kiev, under the guise of a revolution to change the “corrupt regime”, relying on the Bandera Nazi democrats, who already felt completely free under Yanukovich.

Of course, it would be much more difficult for Washington to arrange the Maidan in Moscow; a “regime change” in Russia is an unpredictable special operation, but it had chances for some success, as the Marsh events in Moscow showed. In any case, Washington would have made a serious split in Russia, between the “Putinists” and the conglomerate of patriots, Nazi-patriots and the frank western “fifth column”.

Ukraine, and then Belarus, would have fallen to the feet of the State Department as overripe fruits, as if they had lost all hope of preserving at least some sovereignty. But gosdepovskie neocons, visible puppets of which are Biden, Clinton and Nuland - this is after all the Neotrotskists with a mania of permanent and homosexual revolution, now under the “democratic” sauce, on a global scale! They are the same reckless revolutionaries, like maydanutye Bandera, they are unbearable, only they are above the political level.

However, all these permanent "professional revolutionaries" are therefore not professional in specific areas of activity. Ideology blinded their eyes to everything, and their Lenin, who could coolly analyze the situation and make edits to the "world revolution" (like Lenin's NEP policy), they, to our happiness, do not.

American neocons can only crush by sanctions and drench in the press and in their secret prisons, like Bandera in the former Ukraine, but they also use the economic and military potential of the United States. They even turn the UN Security Council into the Maidan; they are not ashamed to arrange provocations even there. Former US Secretary of State Colin Powell shook the test tube with detergent powder at the UN (!), Posing as proof weapons mass destruction of Iraq to justify the US aggression against Iraq, which started the fire in the Middle East ...

Today, Western analysts, in general, recognize the failure of Washington’s strategy, that is, the failure to exert pressure on Russia by destabilizing Ukraine, and the “regime change” in Kiev. The failure to use the neo-fascist Bandera junta as an anti-Russian battering ram, reinforced by Western sanctions, against Russia. They issue the permanent Trotsky pogrom in Ukraine for "democracy", and the pinnacle of a certain "strategy"! And after that, they wonder why, despite the sanctions economic difficulties of Russia, it did not lead to a deterioration of the socio-political situation in Russia.

Apparently, the Washington homosexual neo-Trotskyists really hoped for a sharp deterioration of the situation in Russia, the fall of the “Putin regime”, or the surrender of important geopolitical positions to them. The opposite happened: the coup in Kiev consolidated Russia, “nationalized” its elite, the authority of President Putin reached its maximum, and today he is the most respected politician in the world, and not only in Russia, but also in the non-Western world.

Russia did the "unthinkable", according to one American professor, rebelled like Phoenix from the abyss of the Cold War and challenged the West. That is, she accepted the challenge of the West in Ukraine and the Middle East, and answered it in the Crimea, in the Donbass and in Syria. In general, Russia began to act as before it was only allowed to act in Washington. As a superpower ... This is Washington and considers it a "challenge to Russia" ...

Now the world in our world rests on the "Minsk Pause". Negotiator of Russia in Minsk, Boris Gryzlov, warned recently Kiev and Washington that Parliament’s adoption of laws on elections in the Donbas and its status without agreement with the republics of Donbass would violate the Minsk agreements. Then this passage was repeated by the Russian Foreign Ministry.

The situation on the Bandera Krajina is now awesome, it eats up the remnants of the Soviet legacy, and goes to an economic collapse, Western aid is clearly insufficient. The West in general never gives free aid to anyone, except for the supply of weapons. But Bandera is not supplied and weapons, because Moscow made it clear that it is ready in this case to fight, but it will be a war not with Bandera, but with Washington and its vassals. On this warning, Moscow, supported by a demonstration of the capabilities of the Russian Aerospace Force of the Russian Federation in Syria, holds the “Minsk Pause”

The global “democratic” neo-Trotsky-homosexual bullie thinks what to do in such a situation, when Russia became, in fact, again a superpower? War with Russia other people's hands Bandera fails.

In general, the West is entangled in the web of its intrigues in the "regime change" in the world, and it beats in it like a fly that has lost its bearings. The chairman of the European Council, Donald Tusk, blurted out recently that the specter of disintegration is already roaming Europe. And Syria, on the contrary, stands unshakably, with the support of the Russian Aerospace Forces, and Washington has practically no chance to “change Assad” and turn Syria into Libya.

The prudent prudent Albion is repelled by a referendum from the European Titanic drowning in the waves of migrants. Turkey and Erdogan are threatening Europe with a “new policy”, which may well hide terrorist acts in European cities, and the new Turkish Sultan has opportunities for that. So the prophecy of Vanga from the last century: to be Europe empty, is confirmed before our eyes ...

In America itself, the neocon-neo-Trotskyists have an “internal enemy” - presidential candidate billionaire Donald Trump, whom Clinton has already declared “a threat to US national security”! So the neocons and America will be turned into a “new Ukraine”, with the inevitable Maidan and pogroms.

And in Russia ... the acute economic crisis that was so predicted to us did not happen, and it will not happen anymore, or it will be stopped by a mobilization policy that is objectively necessary in view of the obvious Western and American threat to Russia. The topic of American missile defense is not yet sufficiently understood by our society ...

Perhaps a significant strengthening of Russia, if hundreds of thousands of “Russian Germans” and other more normal Europeans emigrate to Russia, such sentiments are now disturbing European social networks.

In the two years of the non-professional, neo-Trotsky policy of Washington, Russia has significantly strengthened its Armed Forces and videoconferencing, strengthened the protection of air borders along the entire perimeter, and apparently made other necessary preparations. What kind? Putin knows!

Ctrl Enter
Noticed oshЫbku Highlight text and press. Ctrl + Enter
We are
Situational analysis of the death of the MH17 flight (Malaysian Boeing 777), made on the basis of engineering analysis from 15.08.2014Results of the week. “Do what you want, but in half an hour in the forest it was light, dry and bear!”
Military Reviewin Yandex News
Military Reviewin Google News
44 comments
Information
Dear reader, to leave comments on the publication, you must sign in.