Russia, do not give up yours! 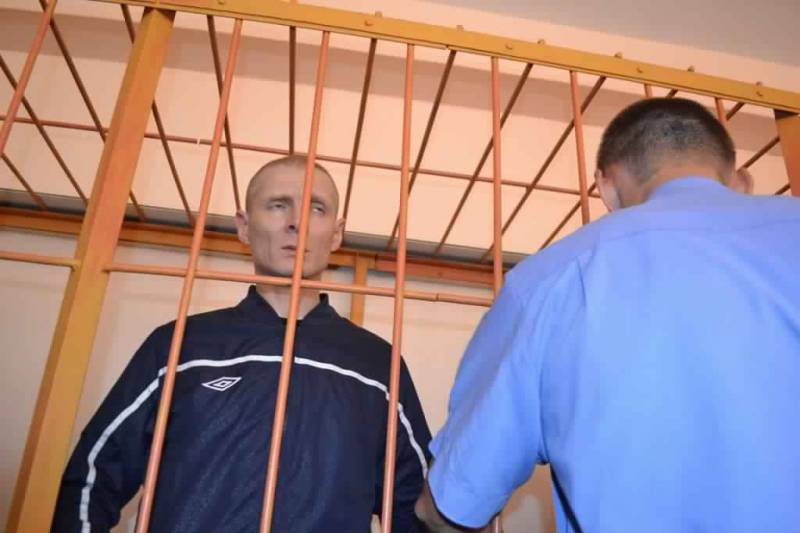 Continuing the theme of the Russians, who are currently in the dungeons of the SBU in Kharkov, Poltava, Kiev and other cities, I want to say a word in defense of the Russian.

Generally, this is not an isolated case. Not one Russian today is under the so-called consequence in Ukraine. It’s just that we are far from being properly informed about everyone.

I will try to correct the situation.

I already wrote about one of the leaders of the resistance of the fascist junta from Kharkov, Yuri Apukhtin. It is about his like-minded and ally, Sergei Yudaev.

Yudaev’s friends were able to transmit a number of documents from Sergey, including his personal appeal, which he personally wrote. The authenticity of these documents does not cause doubts and is confirmed by his colleagues who are both in Russia and in the LDNR.

I wrote the word EXCHANGE.

The fact is that Sergey Yudaev is recognized by the Russian Federation as a citizen. Here is a document confirming its status. 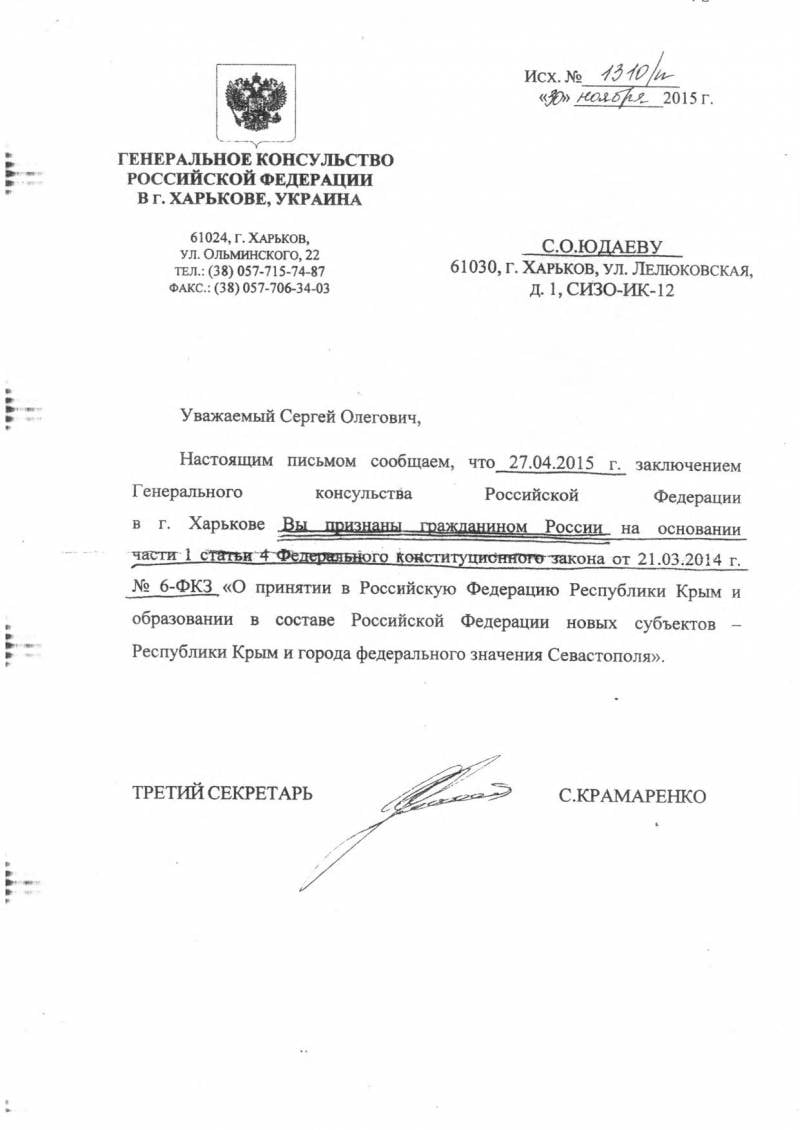 What is incriminated to Yudaev? His main fault lies in the organization of the "assault" of the Kharkiv Regional State Administration 6 and 7 on April 2014, together with Apukhtin, Golovachev, Logvinov. And, if the April 6 assault was completely bloodless, then, according to the prosecution, just April 6 were also affected. Although for two years that there is a “consequence”, the victims have never been presented to the accused.

The saddest thing is that Yudaev could not organize riots near the HOGA, which led to the fact that these people suffered precisely on April 7. He has an iron alibi, which is confirmed by the SBU provocateurs, the testimony of almost hundreds of witnesses, the recordings of video cameras, the testimony of billing his phone.

It was at the time when the specified events occurred near HOGA, in the interval from 22 to 23 on 7 on April 2014, Yudayev was in a completely different place. He was engaged in trashing the office of the ATN television channel owned by Avakov. That is, committed what is interpreted under the article "hooliganism with the infliction of material damage."

There are indications from the direct participants in the events that Yudaev did not take part in the damage to the property, because as a streamer, he just took everything on camera. Moreover, people claim that he urged others not to spoil the property.

Obviously, the underlying reason is that Yudaev "took an active part in the rally for friendly relations with the Russian Federation and the empowerment of the regions of Ukraine" (the wording was taken from the indictment).

And the brave Ukrainian judges do business in three episodes at once. HOGA 6 assault on April, 7 assault on April and hooliganism in the office "ATN". And no one is embarrassed by the fact that one of the episodes is an alibi differently. No one.

Yudaev was arrested on April 8 of the year. Since September, 2014 is completely forbidden to him to see his relatives. 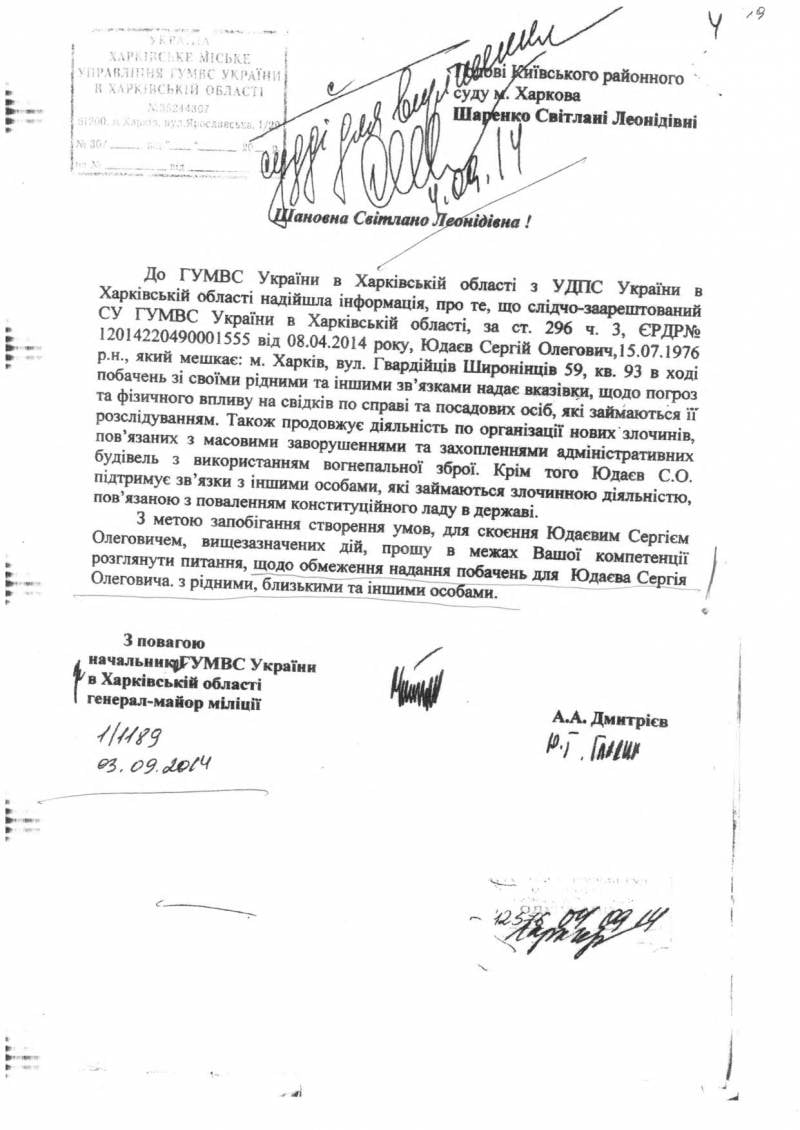 Moreover, frank supporters of friendship and fraternity with Russia in prison are just slowly being killed.

No, they are not beaten by evil investigators. But there is an old and equally effective method. Criminals infected with tuberculosis are placed in the cell of the suspect under investigation, hoping that they are in direct contact and will infect their cellmate.

Investigators in Kharkov have their own speedonos - someone Vladimir Golodchenko, born 1965, a repeat offender with experience. Golodchenko spent a month in the same cell with another person under investigation in this case, Dmitry Pigarev. In December 2015, Pigarev was released on bail, and upon leaving the SIZO, he was diagnosed with an acute form of open tuberculosis. Dmitry managed to cure, but ...

"Paperwork" is already the third year. And here a lot of questions arise.

If Yudaev is recognized as a citizen of Russia, then why our diplomatic structures do not take any steps to rescue him? Do we really need the intervention of the President of Russia or the PR campaign in the Ukrainian media, as with Aleksandrov and Erofeev, so that the staff of the consulates and embassies began to move, and not to signify any actions? Themselves in any way?

And on the basis of a letter from 30 in November 2015 of the year, a native of Leningrad and a resident of Crimea Sergey Yudaev was recognized as a citizen of Russia. And where is the help of Russia in relation to its citizen?

We can not say that there were no attempts. 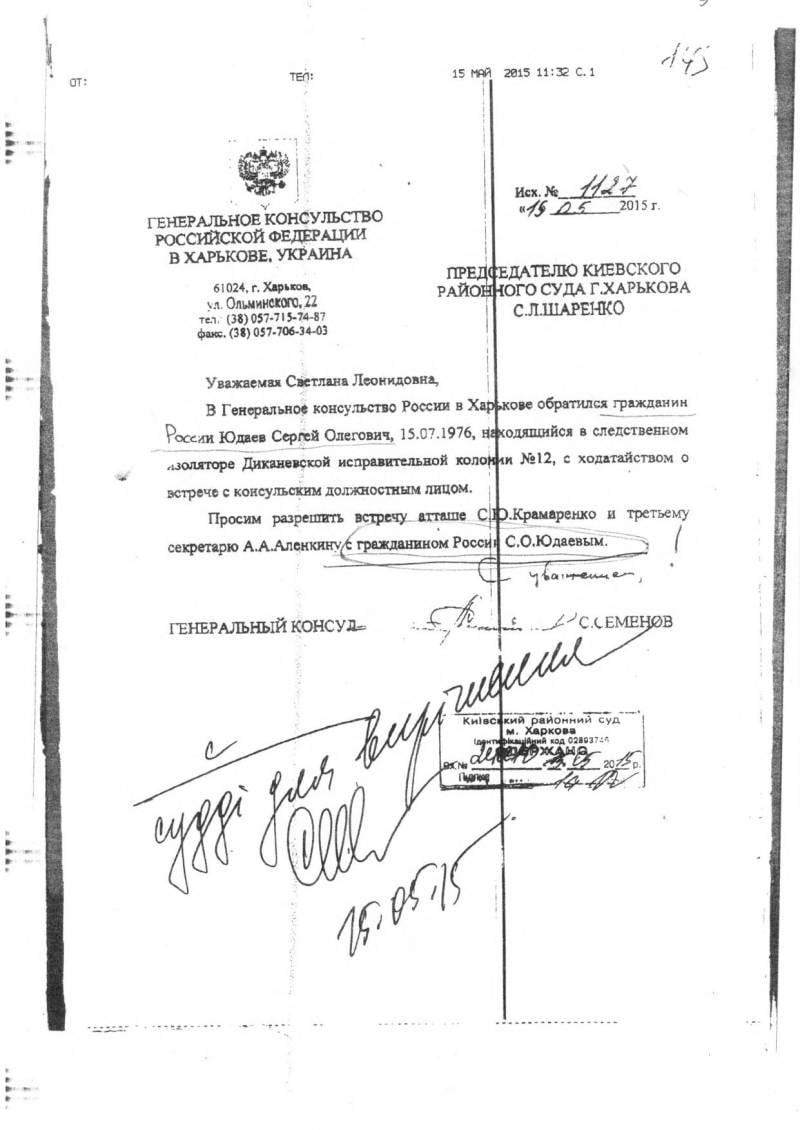 But ... from the letter of Yudaev it follows that in more than two years to achieve a meeting with representatives of the diplomatic mission of Russia in Ukraine, he failed ...

Strange as it may seem, but from Yudaev's letter it follows that he does not lose hope of exchange. Just because he believes in it. Not even because of the frankly fabricated "evidence" of his guilt. But because behind it should be Russia, which, they say, does not give up its own.

If someone wants to learn more about the message of Yudaev and the documents that were attached to his appeal, this can be done by following the following link.

The letter is rather messy, but what else can you expect from a person who has been in the Kharkov SIZO for the third year?

One can only wish firmness of spirit and courage. What, judging by the stories of his associates, Leningrads and Crimeans do not hold.

And to hope that our diplomats will nevertheless make every effort to exchange and return Sergey to their homeland.

Although, unfortunately, there is information that Yudaev is on the list of people who cannot be exchanged. About one of this list, Yuri Apukhtin, I already wrote. Come turn to the other, in the very near future.

I do not know what is happening behind the diplomatic curtain, although it would be very interesting to know. But we are also Russia. And since we believe that the Russians do not give up their war in the war, we will make our own, albeit small, contribution to the fact that this saying will be confirmed by deed. Talking about those who need our help. Let this help be that people will simply know about those who are ours and who should not be abandoned.

Ctrl Enter
Noticed oshЫbku Highlight text and press. Ctrl + Enter
We are
Who and how protests today in KharkovKharkiv resistance movement: "We are uniting to return home"
Military Reviewin Yandex News
Military Reviewin Google News
28 comments
Information
Dear reader, to leave comments on the publication, you must sign in.