June 6 is the Day of Ukrainian Journalist. Someone else? ..

6 2016 June
61
For some time in the list of oxymorons arrived. Ukrainian journalist - as an example ... And today, on June 6, these same Ukrainian journalists celebrate their professional holiday. The profession as such ceased to exist simultaneously with the coverage of the role and place of the first blood on the Maidan, but the holiday remained, as it were. Apparently, it remained as a mockery of the real profession of a journalist and as a symbol of what the Ukrainian reality transforms this profession into. 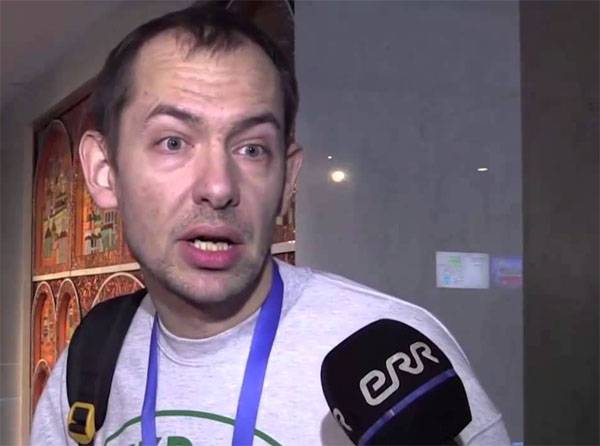 Based on the latest trends in Ukraine, an attempt should be made to find out who the Ukrainian journalist is, or rather the person who is considered to be a journalist in Kiev today. At the same time, it will obviously be necessary to brush off all those professional competencies that are de jure involved in journalistic activities.

To begin with - the definition, if I may say so, of a generally accepted character.

A journalist (from fr. Journal - diary, jour - day) is an employee of the publication, whose duties are to promptly collect, process, correctly and affordably set forth objective and relevant information.

If we are talking about a modern Ukrainian journalist, then from this definition it is possible to remove such a word as “objective”. Any information - yes. Any misinformation - yes. But not objective. Otherwise, in the country of the “European democracy” the journalist will be on the list of the notorious Peacekeeper website, which continues to work, despite any attempts at criticism of its existence by major international human rights organizations. And if the site continues to work, it means that an even larger organization stands behind it, whose human rights defense is to protect its own right to use force against any objectionable.

About a month ago, “Peacemaker” on its pages published about 5,5 thousands of names and personal data of journalists from dozens of countries around the world and hundreds of media outlets, including major and very authoritative. All this journalistic army was declared “traitors”, “agents of the Kremlin” and enemies of Ukraine, only because all its representatives had ever received accreditation to prepare reports in the Donetsk and Lugansk people's republics. In fact, Kiev has designated its position as a gravedigger of journalism, and the most vile is that of a gravedigger in the literal sense of the word. After all, the publication of journalists' personal data on the extremist hypocritical "Peacemaker" is not aimed simply at making it possible for his readers to find out who worked in the territory of the DPR and the LPR, but for any of these "readers" to deal with disagreeable radicals media representatives.

One of the victims of this “grave” system was the well-known and popular Ukrainian Journalist (in this case I allow myself to write this word with a capital letter), a writer and TV host Oles Buzina. April 16 scumbags, guided by materials published on the website "Peacemaker", committed a crime by killing Olesya at his house on Degtyarevskaya Street. Oles clearly did not fit the format of the Procrustean lodge that the Maidan authorities of Ukraine decided to build. He was the man who was not afraid to express his own (and not imposed by anyone) views, he did not publish the materials that the radical camarilla would like to see. In modern Ukraine, this was considered a “challenge” to the Maidan “achievements”, and Olesya was counted in April last year, plunging the whole of Ukraine into the abyss of total fear, and making this objective, journalistic work one of the most dangerous.

Modern norms for the “Ukrainian journalist” are exploitation with or without a reason for the only thesis - “Russia-aggressor”. This combination of words can be considered the Ukrainian-journalistic panacea - a bredo-medicine from all that does not fit the Maidan principles of a state collapsing after the anti-constitutional coup of the state.

Procrustean bed of such "journalism" is trying to spread to foreign correspondents. A newspaper correspondent speaks out about his reaction to this kind of activity. The New York Times Ian Bateson. In his article “Ukraine declares war on journalism,” he writes that the Peacemaker site was named “accomplice of terrorists” because he came to Donetsk region in 2014 to prepare a report on the real causes of the crash of Boeing 777, having received accreditation from authorities of the DPR.

From Ian Bateson's comment:
Such a phenomenon is dangerous in any society, and especially in today's Ukraine, where an objective assessment and criticism of the authorities is necessary, perhaps more than ever. Reforms in the country stalled, the state apparatus is mired in nepotism and corruption.

Ian, my dear ... What kind of objective assessment are you talking about when people in Ukraine are being killed as heroes? Not only heroes, but also officials. Surname Savchenko, Mr. Beitson, you about something says? If he doesn’t, then we’ll tell you: Ms. Savchenko is a deputy of the All-Ukrainian Parliament and a member of the Ukrainian delegation to the PACE - this is now. And before becoming a deputy, Ms. Savchenko shot a column of refugees in the Luhansk region and sent fire to the mortar calculations at the Russian journalists. Here's how, my dear Ian ... And for some reason the media in which you, Ian, work, is in no hurry to share this information with your readers.

The mockery of independent journalism is also the presence of a TV channel of the president of Ukraine.

Journalism in general in the pocket of Peter Alekseevich:

Well, on the holiday ... Ukrainian journalists ... To continue to jam the voice of conscience, do you have enough vodka there? ..

Ctrl Enter
Noticed oshЫbku Highlight text and press. Ctrl + Enter
We are
Results of the week. “No, the military is not a profession. This is a sexual orientation ... "Zakharchenko in Debaltseve: "This city for us is a symbol of resilience, a symbol of struggle"
Military Reviewin Yandex News
Military Reviewin Google News
61 comment
Information
Dear reader, to leave comments on the publication, you must sign in.