New version of the modernization of the Argentine tank TAM 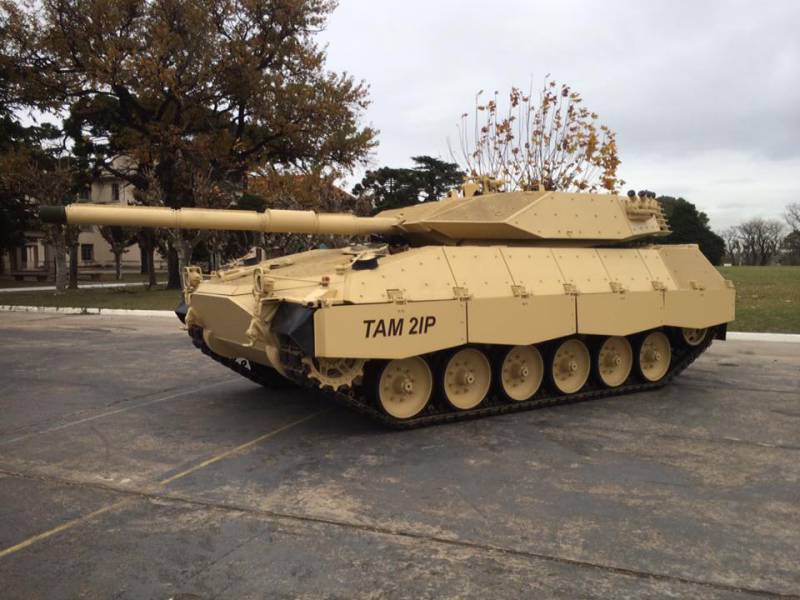 In June 2015, the Ministry of Defense of Argentina, after lengthy delays and procrastination, nevertheless concluded an agreement with Israel on the modernization of a part (74 vehicles) of the main fleet tanks Argentinean army TAM (Tanque Argentino Mediano). An agreement worth $ 111 million provides for the delivery by Israel of Elbit Systems as the main contractor of the kits for the modernization of 74 Argentinean TAM tanks (now the Argentine army has 218 such tanks), and a joint venture with the participation of Elbit Systems is being created to transfer technologies.

Within the framework of the signed agreement, Elbit Systems together with Israeli enterprises Israel Military Industries (IMI) and Tadiran upgraded one TAM tank in Israel to the TAM 2IP variant, which was delivered to Argentina upon completion. During the 29 events in May, representatives of the Argentine army were informed about the start of full-scale tests of this prototype.

The TAM 2IP tank differs from the previous version of the TAM 2010С modernization (carried out under the auspices of the same Elbit Systems under the previous 2 agreement) by installing the characteristic Israeli modules of the additional multilayer booking made by IMI on the hull and tower of the tank, which made the TAM 2IP look like a smaller version of the Merkava tank. The weight of additional protection is not disclosed, but it is reported that extensive testing and should clarify the issue of the effect of the increased weight of the tank on its chassis.

The remaining elements of the modernization should be similar to the previously developed version of TAM 2C and suggest equipping the TAM tank supplied by Elbit Systems with a round-the-clock duplicated aiming system, a thermal driver, a tank information-control system, a new communication system, sensors for warning about laser irradiation, the introduction of the system Honeywell's fire control system; replacing the tower’s hydraulic drives and tools with electric ones; replacing the tool stabilizer; replacing fire system, as well as the installation of an auxiliary power unit. The fire control system will allow you to fire a cannon with Israeli IMI LAHAT guided missiles with a semi-active laser guidance system (although they are not planned to be purchased by Argentina yet). The composition of the ammunition will be introduced modern Israeli 105-mm sabot shells.

According to the 2015 agreement, the serial modernization works themselves will be carried out in Argentina on the technical basis of the 601 and 602 arsenal (technical) battalions (Batallón de Arsenales 601 y 602) of the 601 arsenal group (Agrupación de Arsenales 601) Argentina. -Syur-Mer (Buenos Aires province), created on the basis of the former TAMSE tank factory, where TAM tanks were produced in due time.

Recall that the Argentine TAM tank modernization program has a long history, which boils down to projects and conversations that were not realized due to lack of funds. After about two decades of projection, in December 2010, the Argentine Ministry of Defense finally signed the first intergovernmental agreement with Israel on involving Elbit Systems in the design and implementation of the TAM tank modernization project. Under the terms of this agreement, Elbit was supposed to modernize five TAM tanks as prototypes for testing on its own. Subsequent work was to be carried out in Argentina on the technical basis of the 601-th and 602-th arsenal battalions, where five more tanks were to be upgraded together with the Elbit, and then the serial modernization of the first batch of 108 machines was to begin. In total, it was planned to modernize in the future all 230 available at that time in the TAM army.

The first upgraded Elbit tank on the TAM 2C version was officially transferred to the Argentine army 26 on April 2013. However, further work was suspended by the Argentine side for financial reasons, and in August 2013, the Argentine government decided not to allocate funds for the implementation of the program, freezing it for an indefinite period, and returned to it only in 2015 in a modified version of the modernization and limited its plans to 74. by tanks.

The main reason for the fluctuations about the modernization of TAM remains its extremely high cost - from 2,5 to 3 million dollars per unit (including both Israeli supplies and the cost of work in Boulogne-sur-Mer), comparable to the cost of a possible acquisition on the world market much more powerful and efficient tanks. In addition, it was reported that during a survey of the TAM tank fleet, "problems with the quality of steel armor and problems with the fatigue strength of other materials" were found.

The TAM tank was developed by order of Argentina in 1970-ies by the German group Thyssen Henschel using the German BMP Marder as the base chassis. Production of tanks was carried out in Argentina on a specially created for this state-owned enterprise TAMSE (Tanque Argentino Mediano Sociedad Estado) from 1979 to 1995 in the number of 256 production units, of which currently in service with the Argentine army are 218 machines. 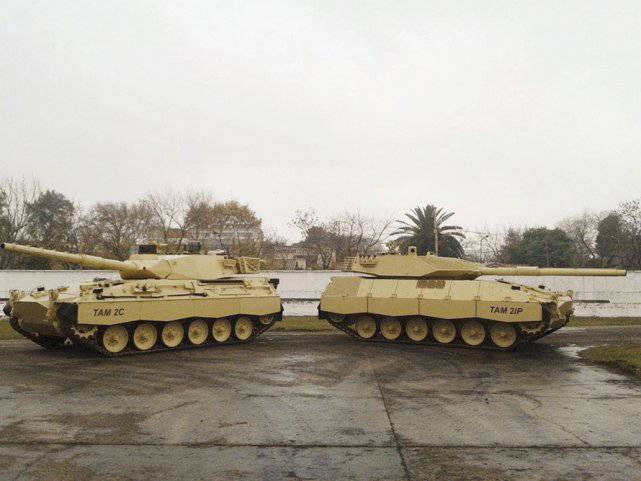 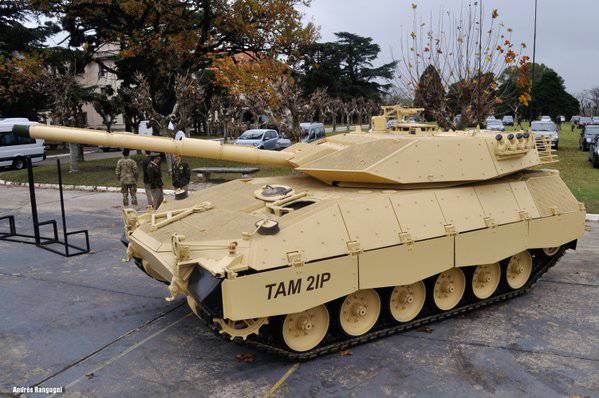 The prototype of the modernized Argentine tank TAM 2IP in the exhibition in honor of the Army Day of Argentina. Buenos Aires, 29.05.2016 (c) zona-militar.com 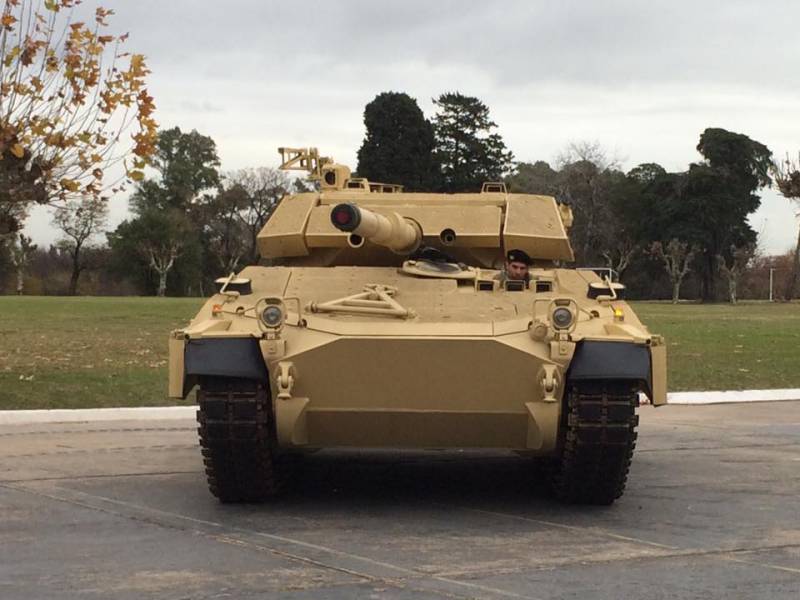 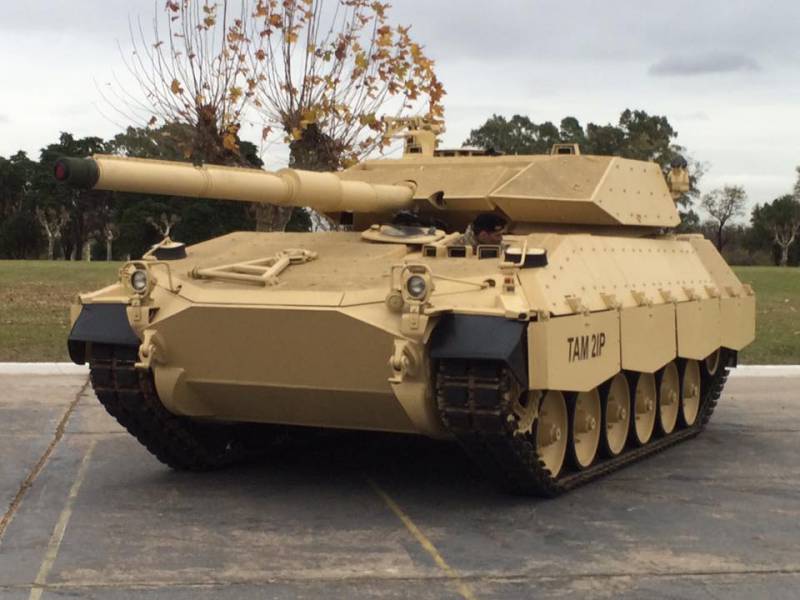 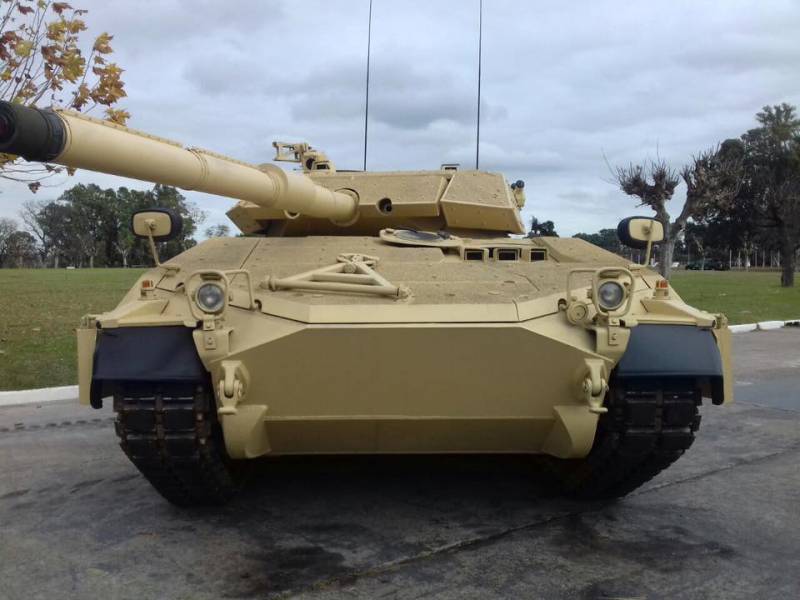 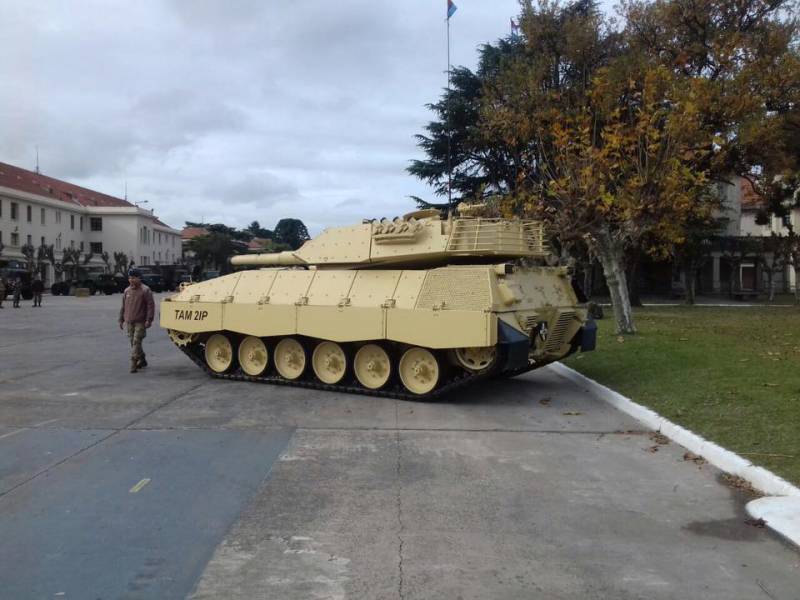 The prototype of the modernized Argentine tank TAM 2IP in the exhibition in honor of the Army Day of Argentina. Buenos Aires, 29.05.2016 (c) www.taringa.net