Dedicated to the heroes of the diesel fleet is dedicated 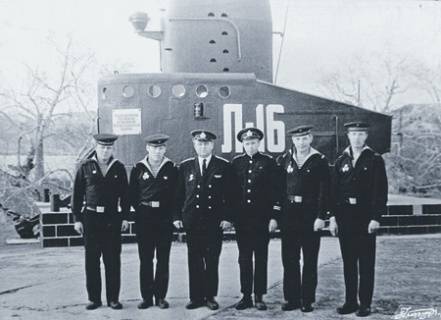 I, who almost equally served on both “diesels” (as they began to be condescendingly called in the beginning of the 70s) and on the newest nuclear-powered ships of that time, I would like to pay tribute to the officers and sailors of the 182nd Pacific submarine brigade fleet (Pacific Fleet), not marked by high awards and high-profile orders of the Minister of Defense. They bore the brunt of the combat service of the Pacific Fleet in the period 1965-1971, that is, in the midst of the Cold War, which then seemed very hot to us. As an example, I want to give only two episodes with the participation of one of the submarines of the brigade. Immediately I apologize to those whose names are not added names and patronymics - just half a century has disappeared from memory ...

After graduating from school, in October 1965 I arrived in Kamchatka in the 182 Brigade as the commander of the steering group of the 641 “B-135” submarine, which had just returned from the tropics after the 93 day of the hike. During the restoration of combat readiness, I heard plenty of stories about swimming in “boiling water” without an air conditioning system. True, in the battery pits - from the experience of the Caribbean crisis - there was already a water cooling system for the electrolyte, which allowed the technology to work in hellish conditions. Until the people until it came. It was a daily struggle for VVD (high pressure air) and for electrolyte density under the conditions of tough opposition from the enemy's anti-submarine forces.

Within six months, the officer corps changed to 75% - who was written off for health, who went up for promotion or transfer. Only Lieutenant Rusanov, Captain of the Medical Service Gavrilyuk, Captain-Lieutenant G.I. Blinder and midshipman A.I. Hudik - the permanent boatswain "B-135". And now in 1966, now I had a chance to understand what the underwater service in the tropics is.

Just before the march, the captain changed. Savinsky could no longer go with us for health reasons, he took us to the sea, to me and to two other lieutenants, Volodya Demidov and Igor Severov, promised to issue submissions for the next title. He kept his word - we returned as senior lieutenants. I did not see him again, but I am grateful to him to this day. Thus, we went to military service under the command of the captain of the 2 rank Yu.M. Gribunina. I have not seen a more experienced commander in my life. I still remember the master class (as it is fashionable to say now) to control the ship during an urgent dive after charging the batteries in a nine-point storm, how to tame a heavy boat at a depth like a mad horse. I have never seen such dangerous trimings. The phrase in his future certification: "... the submarine controls freely ..." I owe it to him, he so intelligibly explained to the watch officers the essence of his actions.

On 13, the day of the trip was a major nuisance - the air shaft of the RDP (a device for running a diesel engine under water. - “NVO”) jammed, apparently due to the powerful waves of waves (70% of the hike we spent in stormy conditions). Charging batteries under the periscope was impossible.

And again, an instructive example: the commander gathers officers to the military council with a “what to do?” Agenda. All spoke out - each against the report to the fleet of a malfunction. We would simply be returned to base with shame. The decision of the commander: to find a way to lower the shaft in the lower position, tightly seal the duct, charge to beat in a positional position (one cabin above the water) with the watch reinforced by leading experts. So it was done, and the ship continued on its way to the given area.

I don’t remember how many times during the night I had to go under water from the Orions appearing near (base patrol planes aviation US Navy), but thanks to the artistic work of the radio operator-rumors and the virtuosos of the radio detectors, who squeezed everything out of the inferior passive search station "Nakat", the ship's commander was able to evade the detection of a possible enemy by anti-submarine aircraft for more than two months. We have never been pursued, only twice in the distance was the work of active sonar buoys exposed, probably for investigating false contact. The coordinated work of the crew also played a role - without any automation, the boat went to a safe depth, blocking all the standards for urgent immersion.

The weather was favorable in this sense - on some days we were simply blissful. But not from the bumpiness to 45 degrees, but from the fact that all the basic patrol aviation was sitting on the ground and could not take off, and therefore it was possible to calmly beat the exercises in the surface position. Thus, our submarine — by throwing on the surface at night and slowly under water during the day — followed its route steadily. 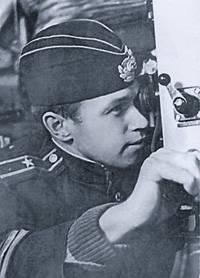 Captain 3 rank I.I. Gordeev inspects the horizon ascent to the periscope depth.
But this is outside, and what was in a solid case, otherwise you can’t call it a collective feat ... In 20 minutes after immersion, the temperature in the second, residential compartment rose to 52 degrees. Everyone left him, it was possible not to dream about dinner in the mess room, he was usually transferred to late evening. The sixth was the coolest, the electromotive compartment was “only” plus 34 degrees. There was another “oasis” - the torpedo compartment, where the elect, that is, those who had access to it, were blissful on the shelf torpedoes under a stream of far from cool air from the “Ushastikas” - fans with rubber blades (here the temperature did not rise above 40).

Most acoustics accounted for, the cabin of which was located above the battery hole in the second compartment. They had to be changed not after four hours of watch, but in an hour. Until now, there is a picture in the eyes: night, surface position, charging of the battery is in progress, the battery is ventilated “on the way” along with the second compartment. Sideways in a cubbyhole on the coil of IDPs (air-foamy boat fire extinguishing system), at the detached bulkhead in the central post, the head sailor Lasoon, who had changed from the watch, was sitting and avidly breathing in the fresh air that was being forced into the compartment. Forces to climb the bridge was no longer, although acoustics commander allowed to go up above the limit.

Got everything from the senior assistant to the sailor coca. But I have never seen the tired face of the commander. Yuri Mikhailovich was always cheerful, shaved, always with a sense of humor, as if he was not touched by heat or humidity in the compartments, or heaving in the surface position, or permanent damage to the materiel (the boat was “aged”), which were eliminated with the same speed as they appeared.

As a result of the campaign, valuable information was obtained on the forces of the probable enemy, including my periscope shots. At the summit Gribunin reported on the malfunctioning of the RDP and his decision to continue the campaign, on which the squadron commander said: "That's right, commander, well done!"

AND THE “WHITE SUN OF THE DESERT” IN ADDITION

The next two years, the submarine "B-135" was on combat duty, participated in the exercises, underwent repairs in the bay Seldyevaya. This time flew by for me, because, being admitted “to everything”, I constantly seconded to other boats and only by the autumn of 1969 did I return to my native ship to take part in a long voyage to the Indian Ocean.

It was a completely different level. In the compartments were powerful freon air conditioners, for which the personnel had to make room, and I lost the first-class cabin. The boat was loaded with all the best that was found on the squadron. Only we had a precious tape “White Sun of the Desert”, for viewing of which at the anchorage sites Seyschel and Socotra were given at once five any films to choose from!

19 September 1970, we traveled through Vladivostok to the Indian Ocean to “show the flag,” as American intelligence noted. The senior aboard was all respected brigade commander Igor Vasilyevich Karmadonov, who had just received the admiral rank. Upon arrival in the Seychelles area, he sailed to the “Excited” destroyer, becoming the senior naval commander in the Indian Ocean zone, and we are commanded by the captain 2 of the rank LP. Malysheva continued business visits to third world countries. When briefing groups of sailors coming ashore in foreign ports, I always repeated the words of a member of the military council of the Pacific Fleet, by which he instructed us at a rally before leaving Vladivostok: “You will visit many countries. Remember, each of you is the plenipotentiary of Russia, each of you will be judged on our country - do not let her down! ”It was 1970 for a year, and we were already plenipotentiaries of Russia (the prophetic words!) ...

The eight-month voyage was both difficult and interesting for the crew. It was necessary to carry out and shooting experimental "tropical" torpedoes, and such repairs, which were considered only under the force of the ship repair plant. But our sailors sdyuzhili and did everything.

The hardest job was welding up the loose rudder bearing of a vertical rudder wheel to swell south of the Maldives. The welder and his assistant were standing up in the water, and me and the commander of the X-5 warmer Leonty Porfirievich Basenko, standing aft to the limit of the boat on the bow, made sure that they were not covered by the wave and the welding machine was turned off in time. That was a sense of personal responsibility and the slogan “Combat mission at any cost” in action!

By the way, the welding was done in such a high quality that the flagship mechanic on arrival in Kamchatka for a long time refused us an emergency dock. Later, during meetings with the participants of this campaign, we all recalled with pleasure: it was hard, but a lot of impressions remained. We were the first in the brigade to reach the African coast, went to the Persian Gulf, walked around the city of Basra in Iraq (to be fair - the first in the Indian Ocean was the B-8 submarine commanded by Captain 2 of the rank of Smirnov).

And these are only two episodes of the life of one submarine. And how many were in those years with the crews of the remaining ships of the 182 Brigade ...

Everything told here is not to show any horrors. It’s just that each of us, from the fleet commander to the sailor, did what the time dictated and on the equipment we had. We did not serve for the currency that was given abroad. We were in the first echelon of the Armed Forces of a great country and were proud of it! These were the best years of our life ...

One of the main achievements of the 182 Brigade, this workhorse of the Cold War, I believe that it was here that the staff for the future nuclear fleet of the new generation was forged. No wonder it was said: the ship can be built in two years, and its commander must prepare 10 years. And when the new ships of the third generation went, the officers of the 182 Brigade — the twin brothers Igor Chefonov and Oleg, Lomov (the future Hero of the Soviet Union), Vodovatov, Ushakov, Butakov and the younger generation — embarked on the bridges of powerful nuclear ships.