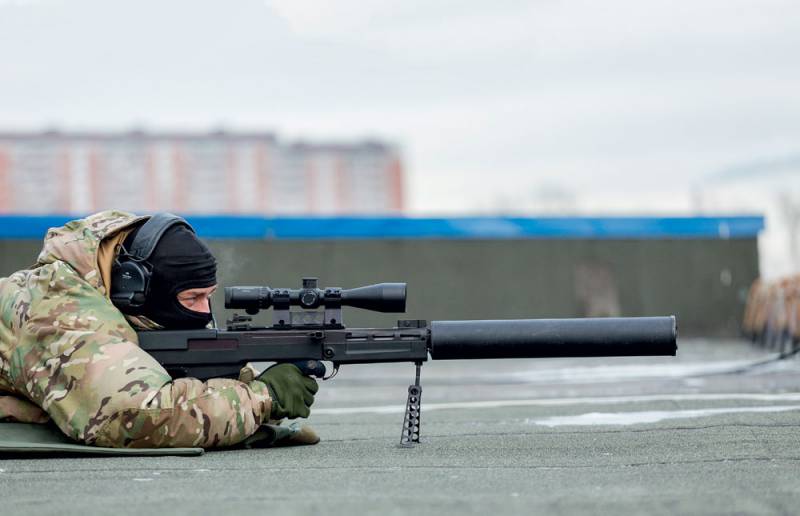 The answer to this question is very difficult: large-caliber rifles create a powerful flash and roar like artillery weapon, and silent samples do not have a large firing distance. You have to choose which is more important: stealth or power.

The solution of the sniper dilemma came from the city, traditionally considered in Russia as the forge of all weapon innovations, - Tula. Gunmen TsKIB SOO (Central Design Research Bureau of sports and hunting weapons - branch of Instrument Design Bureau) developed a unique sniper rifle "Exhaust" - large-caliber and at the same time silent.

In fact, Exhaust is the name of the program for developing the weapon complex: a rifle and ammunition. The official abbreviation is a large-caliber sniper rifle - VKS, or CB-1367. The order for development came from the Center of Special Purpose of the Federal Security Service of Russia: the special forces wanted to get a weapon that could secretly destroy a target protected by armor at a great distance. 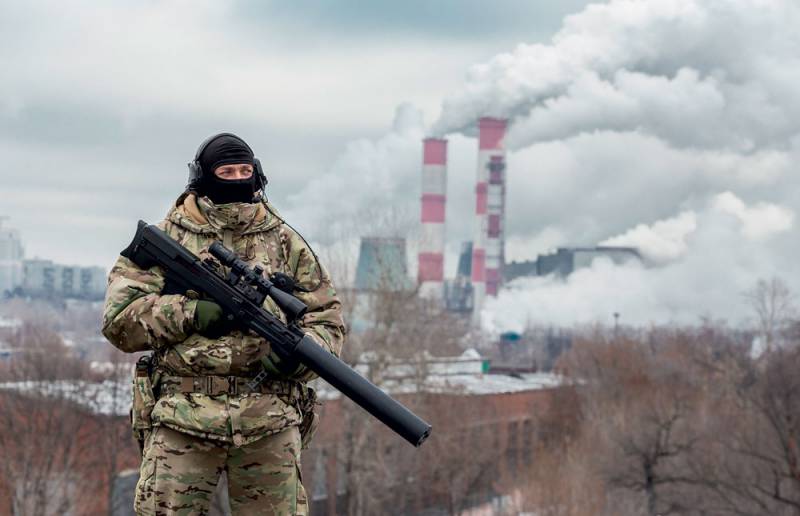 An order for weapons with unusual properties was received from the Special Purpose Center of the Federal Security Service of Russia
The main requirement of the special forces was the ability to secretly destroy the target, located at a sufficiently large distance and protected by armor or some kind of shelter. It turned out to be impossible to solve the task with the use of existing models of weapons or ammunition, therefore Tula gunsmiths began to create a whole complex - a large-caliber rifle plus ammunition.
Slow and inevitable

The creation of the "Exhaust" complex began with the development of ammunition. Since it was supposed to work at long distances, the 12,7 mm caliber was taken as a basis. In Russia, the 1930 x 12,7 cartridge, developed back in 108, was traditionally used to defeat remote targets, used in large-caliber sniper rifles, easel and aviation machine guns. Such ammunition is capable of hitting targets at a distance of more than 1 km and piercing armor steel sheets with a thickness of more than 10 mm. 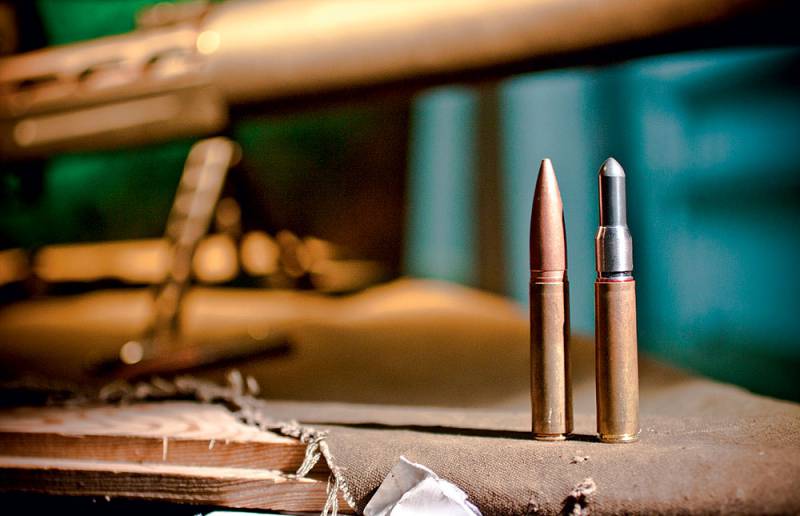 Silver bullet with unusual outlines
has a steel core inside and weighs 79 g. With 100 m such a projectile will pierce through almost any body armor.
However, for the "Exhaust" complex, the old cartridge turned out to be too long. Tula gunsmiths decided to create a new ammunition caliber 12,7 x 54. The deadly product received a general index of SC-130 and several different types of bullets. Moreover, even the lightest of these bullets was much heavier than all previously created for this caliber. The version with the index of the PT weighs 59 g, and the heaviest UPU does 79 at all - a real heavyweight.
The weight of the projectile is not only the increased energy of the ammunition, which allows it to fly farther and hit harder, but also the reduced speed of escape from the barrel. The fact is that reducing the speed of a bullet to subsonic indicators (usually less than 300 m / s) is one of the most common ways to make a shot quieter: objects moving faster than the speed of sound are accompanied by a shock wave that is perceived subjectively by observers as a loud bang. Thus, the Tula gunsmiths could “get what cannot be” - they made a powerful cartridge, which at the same time does not rumble like a gun. 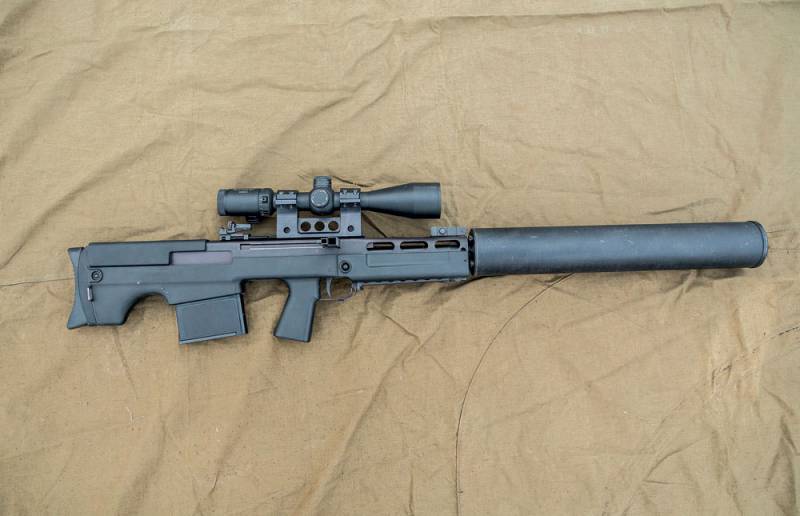 Tula gunsmiths abandoned the traditional "bolted" bolt in favor of the longitudinal-sliding
The reloading handle moves in a straight line, which is very convenient (in the case of a bolt lock, you would have to turn the handle, pull it back, and then return it to its place in the reverse order). The lever of preliminary moving is built in the handle. To pull back the bolt, the shooter must squeeze the “halves” of the handle together, thereby unlocking the bolt itself and hooking the cartridge case to the rim to remove it from the receiver.

True, you have to pay for everything: compared to the standard 12,7 cartridge, which is capable of hitting targets at distances of 1500-2000 m, the new ammunition demonstrates an aimed range of 600-800 m. But Tula didn’t have the task to create another ultra-long anti-material rifle, such as Russian OSV-96 or American Barret M82. It was necessary not only powerful and accurate, but also silent weapons.

All cartridges SC-130 can be divided into two types - increased accuracy and increased penetration. The bullet of the cartridge of increased penetration ability has a steel core inside and differs in a rather bizarre form, resembling a multi-stage rocket. Such a “rocket” at distances up to 200 m is able to perforate a sheet of armor steel with a thickness of 16 mm, and with 100 m it will pierce almost any existing body armor.

In addition to the armor plates, such a cartridge easily breaks through a wooden wall or brickwork up to 10 thickness. At the same time, there is no doubt that wherever the bullet of the SC-130 cartridge gets, its victim is almost doomed: a dynamic blow to any part of the body in such a caliber is sure death, and in the case of contact with a limb, it is guaranteed to be torn apart and severe blood loss. By the way, the store "exhaust" fits five such deadly ammo. 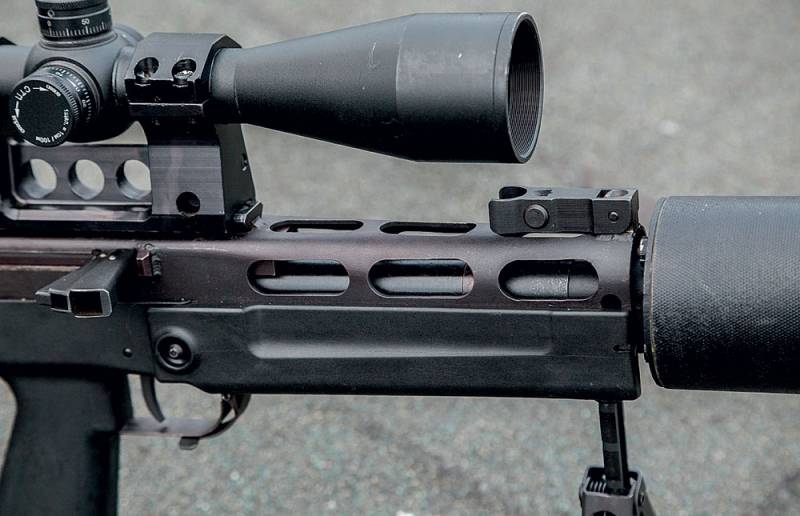 To install a telescopic sight, it is not necessary to remove the front sight and the rear sight, you just need to fold them
In case of problems with optics, the mechanical sight is always at the ready.
Size matters

Having decided on the ammunition, the designers developed a “delivery tool” for it. First of all, it was necessary to make the weapon silent. If subsonic speed contributes to this in ammunition, then a silent shooting device (PBS) is used in the weapon, simpler - a silencer.

To effectively silence the cotton from the shot of such a powerful cartridge, you need a very large muffler. PBS turned out to be frightening: huge, almost half-meter. But the result is amazing: the shot of the “Exhaust” is so quiet that it looks more like a click of an air rifle. According to the subjective opinion of the author of the article, the sound of the shotgun VKS is even quieter than that of its colleagues - the special silent rifles “Vintorez” and VSK-94, and the caliber of these samples is 9 mm against 12,7 mm in Exhaust. In a busy urban environment, such a click will not be heard from a couple of dozen meters.

A fighter can comfortably fire without rifle headphones. The sound of a shot doesn’t hurt the shooter’s ears at all, even if the fire is in a deaf closed bunker, and anyone who has ever shot 12,7 caliber weapons knows: even “in the open air” such a shot can be contused, and in a closed space, it is guaranteed that it hurts hearing organs . 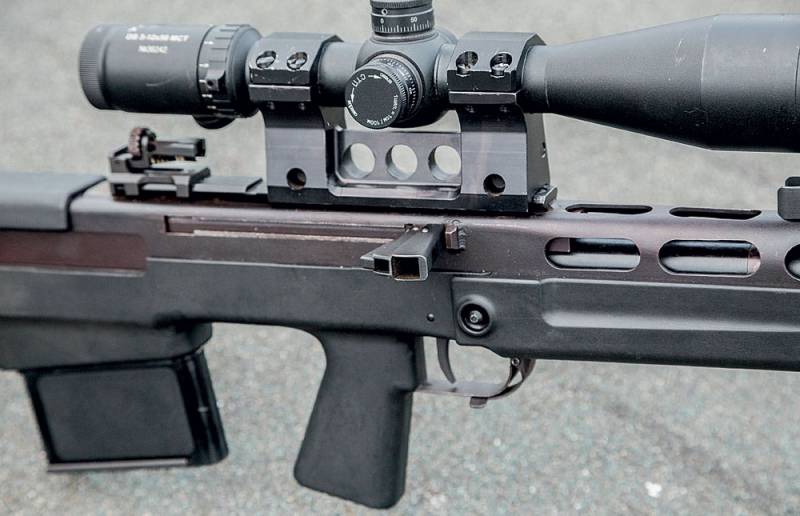 Pre-release lever
protects against spontaneous inertial reloading of the weapon under the action of a powerful recoil pulse when fired.
Having solved the issue of noiselessness, the designers faced a new challenge: a huge silencer promised to significantly increase the size of the rifle. And if at the very least we got used to standard 12,7 caliber models, then this one would surely have stretched about two meters, standing in line with the anti-tank guns of the Second World War. For weapons that are supposed to be used covertly, such dimensions are unacceptable.

To save the cherished centimeters, it was decided to take the bullpup system as a basis - not the most common for sniper weapons, but a fairly common layout scheme. In her store with ammunition is not located in front of the fire control handle, and behind it. At the same time, there is no need for a butt, since its role is played by a receiver biased back with a butt pad.

The design of the weapon, it was decided to use the scheme with manual reloading, which gives a higher accuracy and accuracy of fire compared to automatic samples. The return of such weapons is less, because there is no inertia from the movement of the bolt inside the receiver. Finally, this design is simpler and easier, which affects the reliability and convenience. 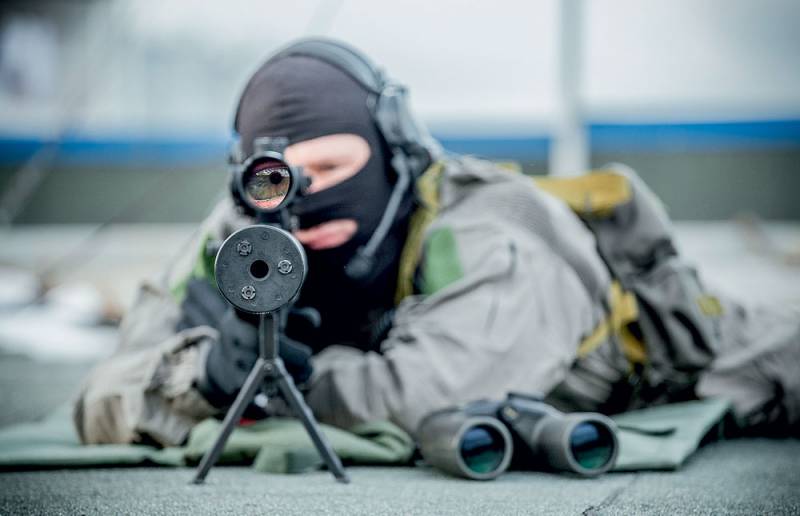 Normally, the CB-1367 is equipped with mechanical sights - the front sight and the whole. An optical sight can be mounted on a rifle, for which Picatinny rail is mounted on top of the receiver on top. So that the fly and the rear sight did not overlap the optics, they were made folding. This is also useful because if the sight is suddenly damaged, the shooter can always pick up the mechanical sights and use them.

The development of VKS “Exhaust” was begun in 2002 year. The neck of secrecy from the new complex was removed relatively recently, so for a long time nothing was known about its existence. Today, the rifle is used in several special units of various law enforcement agencies of the Russian Federation.

Due to the specificity of the tasks and the high cost of the rifle, it was made by a very small batch. According to information in the media, in Tula, on the basis of this product and its ammunition, another type of weapon is being developed - the ASH-12 assault rifle. However, the representatives of the arms enterprise themselves do not confirm this information. 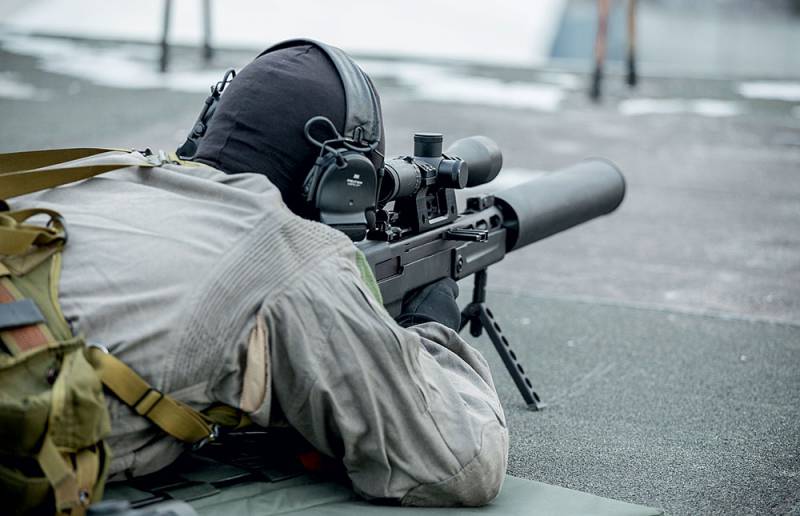